You are here: Home page > Electricity and electronics > Transformers
Advertisement 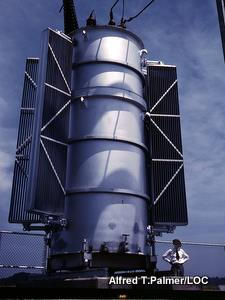 The mighty power lines that criss-cross our countryside or wiggle unseen beneath city streets carry electricity at enormously high voltages from power plants to our homes. It's not unusual for a power line to be rated at 300,000 to 750,000 volts—and some lines operate at even higher voltages. [1] But the appliances in our homes use voltages thousands of times smaller—typically just 110 to 250 volts. If you tried to power a toaster or a TV set from an electricity pylon, it would instantly explode! (Don't even think about trying, because the electricity in overhead lines will almost certainly kill you.) So there has to be some way of reducing the high voltage electricity from power plants to the lower voltage electricity used by factories, offices, and homes. The piece of equipment that does this, humming with electromagnetic energy as it goes, is called a transformer. Let's take a closer look at how it works!

Photo: Blast from the past: A strangely shaped transformer at the Chickamauga Dam near Chattanooga, Tenn. Photographed in 1942 by Alfred T. Palmer, Office of War Administration, courtesy of US Library of Congress.

Why do we use high voltages?

Your first question is probably this: if our homes and offices are using photocopiers, computers, washing machines, and electric shavers rated at 110–250 volts, why don't power stations simply transmit electricity at that voltage? Why do they use such high voltages? To explain that, we need to know a little about how electricity travels.

As electricity flows down a metal wire, the electrons that carry its energy jiggle through the metal structure, bashing and crashing about and generally wasting energy like unruly schoolchildren running down a corridor. That's why wires get hot when electricity flows through them (something that's very useful in electric toasters and other appliances that use heating elements). It turns out that the higher the voltage electricity you use, and the lower the current, the less energy is wasted in this way. So the electricity that comes from power plants is sent down the wires at extremely high voltages to save energy. 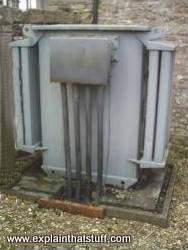 Photo: Coming down: This old substation (step-down electricity transformer) supplies power in the small English village where I live. It's about 1.5m (5ft) high and its job is to convert several thousand volts of incoming electricity to the hundreds of volts we use in our homes.

But there's another reason too. Industrial plants have huge factory machines that are much bigger and more energy-hungry than anything you have at home. The energy an appliance uses is directly related (proportional) to the voltage it uses. So, instead of running on 110–250 volts, power-hungry machines might use 10,000–30,000 volts. Smaller factories and machine shops may need supplies of 400 volts or so. In other words, different electricity users need different voltages. It makes sense to ship high-voltage electricity from the power station and then transform it to lower voltages when it reaches its various destinations. (Even so, centralized power stations are still very inefficient. About two thirds of the energy that arrives at a power plant, in the form of raw fuel, is wasted in the plant itself and on the journey to your home.) 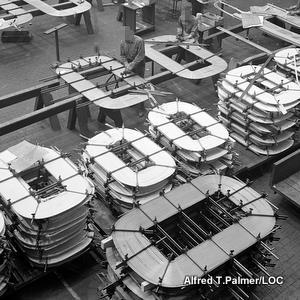 How does a transformer work?

One important thing to note is that this trick works only if the electric current is fluctuating in some way. In other words, you have to use a type of constantly reversing electricity called alternating current (AC) with a transformer. Transformers do not work with direct current (DC), where a steady current constantly flows in the same direction.

If the first coil has more turns that the second coil, the secondary voltage is smaller than the primary voltage:

The current is transformed the opposite way—increased in size—in a step-down transformer:

So a step-down transformer with 100 coils in the primary and 10 coils in the secondary will reduce the voltage by a factor of 10 but multiply the current by a factor of 10 at the same time. The power in an electric current is equal to the current times the voltage (watts = volts x amps is one way to remember this), so you can see the power in the secondary coil is theoretically the same as the power in the primary coil. (In reality, there is some loss of power between the primary and the secondary because some of the "magnetic flux" leaks out of the core, some energy is lost because the core heats up, and so on.)

Reversing the situation, we can make a step-up transformer that boosts a low voltage into a high one:

This time, we have more turns on the secondary coil than the primary. It's still true that:

In a step-up transformer, we use more turns in the secondary than in the primary to get a bigger secondary voltage and a smaller secondary current.

Transformers in your home 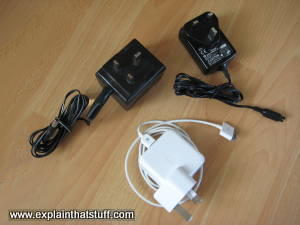 Photo: Typical home transformers. Anticlockwise from top left: A modem transformer, the white transformer in an iPod charger, and a cellphone charger.

As we've already seen, there are lots of huge transformers in towns and cities where the high-voltage electricity from incoming power lines is converted into lower-voltages. But there are lots of transformers in your home also. Big electric appliances such as washing machines and dishwashers use relatively high voltages of 110–240 volts, but electronic devices such as laptop computers and chargers for MP3 players and mobile cellphones use relatively tiny voltages: a laptop needs about 15 volts, an iPod charger needs 12 volts, and a cellphone typically needs less than 6 volts when you charge up its battery. So electronic appliances like these have small transformers built into them (often mounted at the end of the power lead) to convert the 110–240 volt domestic supply into a smaller voltage they can use. If you've ever wondered why things like cellphones have those big fat chunky power cords, it's because they contain transformers! 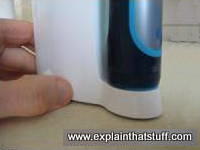 Photos: An electric toothbrush standing on its charger. The battery in the brush charges by induction: there is no direct electrical contact between the plastic brush and the plastic charger unit in the base. An induction charger is a special kind of transformer split into two pieces, one in the base and one in the brush. An invisible magnetic field links the two parts of the transformer together.

Many home transformers (like the ones used by iPods and cellphones) are designed to charge up rechargeable batteries. You can see exactly how they work: electricity flows into the transformer from the electricity outlet on your wall, gets transformed down to a lower voltage, and flows into the battery in your iPod or phone. But what happens with something like an electric toothbrush, which has no power lead? It charges up with a slightly different type of transformer, which has one of its coils in the base of the brush and the other in the charger that the brush stands on. You can find out how transformers like this work in our article about induction chargers.

If you've got some of these transformer chargers at home (normal ones or induction chargers), you'll have noticed that they get warm after they've been on for a while. Because all transformers produce some waste heat, none of them are perfectly efficient: less electrical energy is produced by the secondary coil than we feed into the primary, and the waste heat accounts for most of the difference. On a small home cellphone charger, the heat loss is fairly minimal (less than that from an old-fashioned, incandescent light bulb) and not usually something to worry about. But the bigger the transformer, the bigger the current it carries and the more heat it produces. For a substation transformer like the one in our photo up above, which is about as wide as a small car, the waste heat can be really significant: it can damage the transformer's insulation, seriously shorten its life, and make it much less reliable (let's not forget that hundreds or even thousands of people can depend on the power from a single transformer, which needs to operate reliably not just from day to day, but from year to year). That's why the likely temperature rise of a transformer during operation is a very important factor in its design. The typical "load" (how heavily it's used), the seasonal range of outdoor (ambient) temperatures, and even the altitude (which reduces the density of the air and therefore how effectively it cools something) all need to be taken into account to figure out how effectively an outdoor transformer will operate.

In practice, most large transformers have built-in cooling systems that use air, liquid (oil or water), or both to remove any waste heat. Typically, the main part of the transformer (the core, and the primary and secondary windings) is immersed in an oil tank with a heat exchanger, pump, and cooling fins attached. Hot oil is pumped from the top of the transformer through the heat exchanger (which cools it down) and back into the bottom, ready to repeat the cycle. Sometimes the oil moves around a cooling circuit by convection alone without the use of a separate pump. Some transformers have electric fans that blow air past the heat exchanger's cooling fins to dissipate heat more effectively. 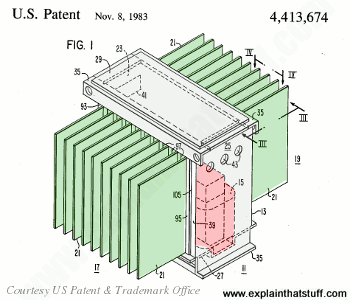 Artwork: Large transformers have built-in cooling systems. In this case, the transformer core and coil (red) sit inside a large oil tank (gray). Hot oil taken from the top of the tank circulates through one or more heat exchangers, which dissipate the waste heat using cooling fins (green), before returning the oil to the same tank at the bottom. Artwork from US Patent 4,413,674: Transformer Cooling Structure by Randall N. Avery et al, Westinghouse Electric Corp., courtesy of US Patent and Trademark Office.

What are solid-state transformers?

You will have gathered from reading what's above that transformers can be very big, very clumsy, and sometimes very inefficient. Since the mid-20th century, all kinds of neat electric tricks that used to be carried out by large (and sometimes mechanical) components have been done electronically instead, using what's called "solid-state" technology. So, for example, switching and amplifying relays have been swapped for transistors, while magnetic hard drives have increasingly been replaced by flash memory (in such things as solid-state drives, SSDs, and USB memory sticks).

Over the last few decades, electronic engineers have been working to develop what are called solid-state transformers (SST). These are essentially compact, high-power, high-frequency semiconductor circuits that increase or decrease voltages with better reliability and efficiency than traditional transformers; they're also much more controllable, so more responsive to changes in supply and demand. "Smart grids" (future power-transmission systems, fed by intermittent sources of renewable energy, such as wind turbines and solar farms), are therefore going to be a major application. Despite huge interest, SST technology remains relatively little used so far, but it's likely to be the most exciting area of transformer design in the future.

There are hundreds of patents covering electricity transformers of different kinds. Here are a few particularly interesting (early) ones from the US Patent and Trademark Office database: