Flick a switch and get instant power—how our ancestors would have loved electric motors! You can find them in everything from electric trains to remote-controlled cars—and you might be surprised how common they are. How many electric motors are there in the room with you right now? There are probably two in your computer for starters, one spinning your hard drive around and another one powering the cooling fan. If you're sitting in a bedroom, you'll find motors in hair dryers and many toys; in the bathroom, they're in extractor fans, and electric shavers; in the kitchen, motors are in just about every appliance from clothes washing machines and dishwashers to coffee grinders, microwaves, and electric can openers. Electric motors have proved themselves to be among the greatest inventions of all time. Let's pull some apart and find out how they work!

Photo: Even small electric motors are surprisingly heavy. That's because they're packed with tightly wound copper and heavy magnets. This is the motor from an old electric lawn mower. The copper-colored thing toward the front of the axle, with slits cut into it, is the commutator that keeps the motor spinning in the same direction (as explained below).

How does electromagnetism make a motor move?

The basic idea of an electric motor is really simple: you put electricity into it at one end and an axle (metal rod) rotates at the other end giving you the power to drive a machine of some kind. How does this work in practice? Exactly how do your convert electricity into movement? To find the answer to that, we have to go back in time almost 200 years.

Suppose you take a length of ordinary wire, make it into a big loop, and lay it between the poles of a powerful, permanent horseshoe magnet. Now if you connect the two ends of the wire to a battery, the wire will jump up briefly. It's amazing when you see this for the first time. It's just like magic! But there's a perfectly scientific explanation. When an electric current starts to creep along a wire, it creates a magnetic field all around it. If you place the wire near a permanent magnet, this temporary magnetic field interacts with the permanent magnet's field. You'll know that two magnets placed near one another either attract or repel. In the same way, the temporary magnetism around the wire attracts or repels the permanent magnetism from the magnet, and that's what causes the wire to jump. 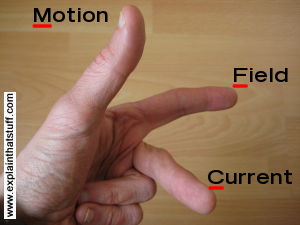 You can figure out the direction in which the wire will jump using a handy mnemonic (memory aid) called Fleming's Left-Hand Rule (sometimes called the Motor Rule).

A quick word about current

If you're confused by me saying that the current flows from positive to negative, that just happens to be a historical convention. People like Benjamin Franklin, who helped figure out the mystery of electricity back in the 18th century, believed it was a flow of positive charges, so it flowed from positive to negative. We call this idea conventional current and still use it to this day in things like Fleming's Left-Hand Rule. Now we have better ideas about how electricity works, we tend to talk about current as a flow of electrons, from negative to positive, in the opposite direction to the conventional current. When you're trying to figure out the rotation of a motor or a generator, be sure to remember that current means conventional current and not electron flow.

How an electric motor works—in theory

The link between electricity, magnetism, and movement was originally discovered in 1820 by French physicist André-Marie Ampère (1775–1867) and it's the basic science behind an electric motor. But if we want to turn this amazing scientific discovery into a more practical bit of technology to power our electric mowers and toothbrushes, we've got to take it a little bit further. The inventors who did that were Englishmen Michael Faraday (1791–1867) and William Sturgeon (1783–1850) and American Joseph Henry (1797–1878). Here's how they arrived at their brilliant invention.

Suppose we bend our wire into a squarish, U-shaped loop so there are effectively two parallel wires running through the magnetic field. One of them takes the electric current away from us through the wire and the other one brings the current back again. Because the current flows in opposite directions in the wires, Fleming's Left-Hand Rule tells us the two wires will move in opposite directions. In other words, when we switch on the electricity, one of the wires will move upward and the other will move downward.

If the coil of wire could carry on moving like this, it would rotate continuously—and we'd be well on the way to making an electric motor. But that can't happen with our present setup: the wires will quickly tangle up. Not only that, but if the coil could rotate far enough, something else would happen. Once the coil reached the vertical position, it would flip over, so the electric current would be flowing through it the opposite way. Now the forces on each side of the coil would reverse. Instead of rotating continuously in the same direction, it would move back in the direction it had just come! Imagine an electric train with a motor like this: it would keep shuffling back and forward on the spot without ever actually going anywhere. 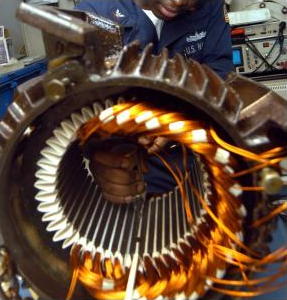 Photo: An electrician repairs an electric motor onboard an aircraft carrier. The shiny metal he's using may look like gold, but it's actually copper, a good conductor that is much less expensive. Photo by Jason Jacobowitz courtesy of US Navy.

How an electric motor works—in practice

There are two ways to overcome this problem. One is to use a kind of electric current that periodically reverses direction, which is known as an alternating current (AC). In the kind of small, battery-powered motors we use around the home, a better solution is to add a component called a commutator to the ends of the coil. (Don't worry about the meaningless technical name: this slightly old-fashioned word "commutation" is a bit like the word "commute". It simply means to change back and forth in the same way that commute means to travel back and forth.) In its simplest form, the commutator is a metal ring divided into two separate halves and its job is to reverse the electric current in the coil each time the coil rotates through half a turn. One end of the coil is attached to each half of the commutator. The electric current from the battery connects to the motor's electric terminals. These feed electric power into the commutator through a pair of loose connectors called brushes, made either from pieces of  graphite (soft carbon similar to pencil "lead") or thin lengths of springy metal, which (as the name suggests) "brush" against the commutator. With the commutator in place, when electricity flows through the circuit, the coil will rotate continually in the same direction.

Artwork: A simplified diagram of the parts in an electric motor. Animation: How it works in practice. Note how the commutator reverses the current each time the coil turns halfway. This means the force on each side of the coil is always pushing in the same direction, which keeps the coil rotating clockwise.

A simple, experimental motor such as this isn't capable of making much power. We can increase the turning force (or torque) that the motor can create in three ways: either we can have a more powerful permanent magnet, or we can increase the electric current flowing through the wire, or we can make the coil so it has many "turns" (loops) of very thin wire instead of one "turn" of thick wire. In practice, a motor also has the permanent magnet curved in a circular shape so it almost touches the coil of wire that rotates inside it. The closer together the magnet and the coil, the greater the force the motor can produce.

Although we've described a number of different parts, you can think of a motor as having just two essential components:

DC motors like this are great for battery-powered toys (things like model trains, radio-controlled cars, or electric shavers), but you don't find them in many household appliances. Small appliances (things like coffee grinders or electric food blenders) tend to use what are called universal motors, which can be powered by either AC or DC. Unlike a simple DC motor, a universal motor has an electromagnet, instead of a permanent magnet, and it takes its power from the DC or AC power you feed in: 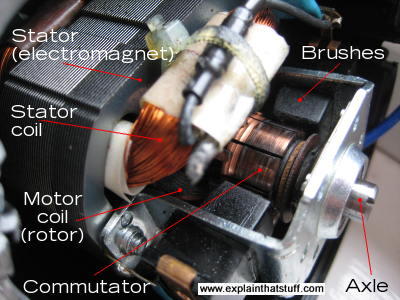 Animation: How a universal motor works: The electricity supply powers both the magnetic field and the rotating coil. With a DC supply, a universal motor works just like a conventional DC one, as above. With an AC supply, both the magnetic field and coil current change direction every time the supply current reverses. That means the force on the coil is always pointing the same way.

Photo: Inside a typical universal motor: The main parts inside a medium-sized motor from a coffee grinder, which can run on either DC or AC. The gray electromagnet round the edge is the stator (static part) and its powered by the orange-colored coils. Note also the slits in the commutator and the carbon brushes pushing against it, which provide power to the rotor (rotating part). Induction motors in such things as electric railroad trains are many times bigger and more powerful than this, and always work using high-voltage alternating current (AC), instead of low-voltage direct current (DC), or the moderately low voltage household AC that powers universal motors.

Other kinds of electric motors 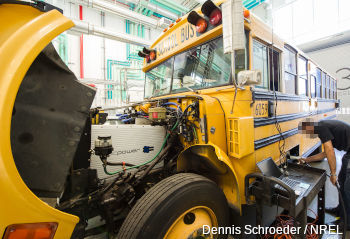 In simple DC and universal motors, the rotor spins inside the stator. The rotor is a coil connected to the electric power supply and the stator is a permanent magnet or electromagnet. Large AC motors (used in things like factory machines) work in a slightly different way: they pass alternating current through opposing pairs of magnets to create a rotating magnetic field, which "induces" (creates) a magnetic field in the motor's rotor, causing it to spin around. You can read more about this in our article on AC induction motors. If you take one of these induction motors and "unwrap" it, so the stator is effectively laid out into a long continuous track, the rotor can roll along it in a straight line. This ingenious design is known as a linear motor, and you'll find it in such things as factory machines and floating "maglev" (magnetic levitation) railroads.

Another interesting design is the brushless DC (BLDC) motor. The stator and rotor effectively swap over, with multiple iron coils static at the center and the permanent magnet rotating around them, and the commutator and brushes are replaced by an electronic circuit. You can read more in our main article on hub motors. Stepper motors, which turn around through precisely controlled angles, are a variation of brushless DC motors.

Related articles on our site

Here are some safe and simple motor-making activities you can try for yourself. In order of difficulty, the first is a simple screw motor; the last is a fully-fledged DC commutator motor.

Patents are a great source of detailed technical information and drawings. Here are a few I've dug out from the USPTO database: