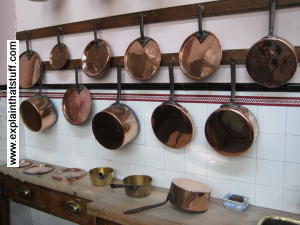 Copper is one of those materials we use all day long in all kinds of ways without ever really noticing or thinking about it. Every time you switch on something electrical, like a vacuum cleaner or a washing machine, every time you watch television, every time you make a telephone call, and most of the time when you take a coin out of your pocket to buy something, you are using copper. This versatile metal is used in some pretty high-tech gadgets and machines—everything from electron microscopes to mobile cellphones—but it's also lining the bottom of cooking pans and protecting the Statue of Liberty. It's one of the oldest metals in common use, dating back something like 10,000 years. Let's take a closer look at what makes it so special!

Photo: Thanks to its unique reddish-orange-brown color, copper is one of the easiest metals to recognize. It conducts heat extremely quickly and effectively so it's often used for good quality cooking pots and pans. I photographed these fine examples hanging up in a traditional kitchen in the stately home at Lanhydrock, Cornwall, England.

Copper is a relatively soft, reddish metal that conducts heat and electricity well. It's roughly the 25th most abundant chemical element in Earth's crust and is found throughout the world, from the Andes mountains of Chile (the leading producer, which generates just under a third of the world's copper) to the craggy Cornish coastline in England. The United States, Canada, Poland, Peru, Zambia, and Australia, are also important copper-producing nations.

Unlike metals such as aluminum and titanium, copper is sometimes found in its raw form, mixed into rocks with other metals such as gold, silver, and lead, as well as in copper-containing minerals like chalcocite, chalcopyrite and bornite. Although much of the copper we use is mined from the earth, increasing amounts are produced from recycled materials such as obsolete electrical equipment. 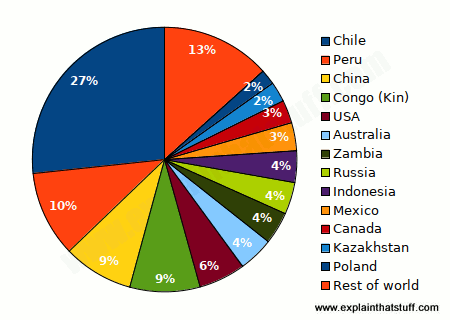 If you're running a copper mine, most of the ore you start with (the material you dig out of the ground) is anything but copper. Typically, copper ores contain only 4 percent copper, so the vast majority is waste. You can use a variety of different processes to separate the copper from the waste. The exact nature of the refining process depends on which metals and other materials the copper happens to be mixed with and how pure you need the final copper to be. The process usually takes several different stages. At each stage, more impurities are removed so the copper gradually becomes more concentrated and pure. 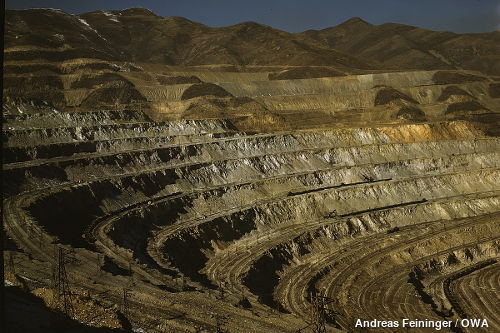 Typically, the process starts with ore being crushed into very small pieces and mixed with water to make a slurry. The slurry is pumped into tanks and mixed with air and oily chemicals that help to separate out particles of copper from the other minerals that may be present. The remaining ore is then heated in a huge furnace called a smelter, which burns off some of the remaining impurities and leaves a material called copper matte, which is at least 50 percent copper. A second heating process follows in which the copper matte is heated with silica and air to remove more waste, leaving a very refined material called blister copper that can be over 97 percent pure. An even purer form of copper can be made by a process called electrolysis, in which electricity is passed through a copper-containing solution. Copper made this way is 99.9 percent pure—and it needs to be, because even slight amounts of impurities reduce its ability to conduct electricity. 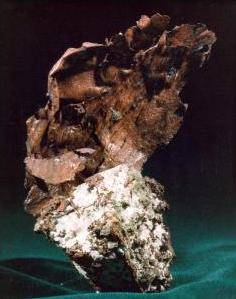 Photo: A specimen of copper. Photo by US Bureau of Mines, courtesy of US Geological Survey.

Physically, copper conducts heat and electricity very well (in other words, it allows them to flow through it quickly and easily), it's relatively soft and easy to shape, and it doesn't go rusty (though its surface gradually turns a characteristic blue-green when it oxidizes in air). It can be made considerably harder by working it, because that encourages longer crystals to form inside it, which add strength to its overall structure—a bit like "rebars" (reinforcing bars) in reinforced concrete.

Although copper is fairly unreactive, it can make a wide range of useful compounds (when copper atoms combine and bind chemically to atoms of other elements) and alloys (when copper atoms mix with atoms of metals and other substances). When it joins with other atoms, copper behaves chemically in two quite different ways to form compounds that are either described as copper (I), also known as cuprous, or copper (II), also known as cupric. The cupric compounds are more stable; cuprous ones generally turn into cupric ones. The two most important copper compounds are copper (II) sulphate, which is bright blue and used in agriculture and medicine, and copper (II) chloride, which is used as a wood preservative and in the printing and dyeing industries. 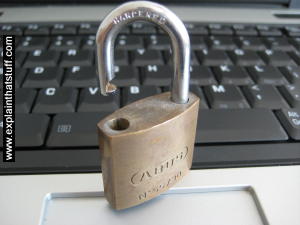 Photo: A padlock whose main body (the gold part at the bottom) is made of brass, a tough alloy of copper and zinc. It's strong, weatherproof, and relatively inexpensive.

Copper alloys are made by mixing copper with one or more other metals to produce a new material that combines some of their best properties. The best-known copper alloys are bronze and brass. Bronze is an alloy mostly containing copper and tin, sometimes with added zinc or lead, and it's harder, stronger, and more resistant to corrosion than pure copper. Different types of bronze have varying proportions of these ingredients. For example, the hard bronze used in making statues is typically 78.5 percent copper, 17.2 percent zinc, 2.9 percent tin, and 1.4 percent lead. Brass is an alloy of copper and typically anything from 10-50 percent zinc, depending on how it will be used.

What is copper used for? 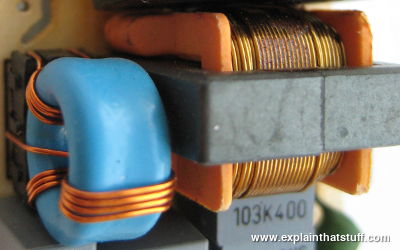 Photo: You can see plenty of copper wire in this electronic circuit from an energy-saving fluorescent lamp.

The things we can use materials for depend on the physical and chemical properties they have—that's the essence of what we call materials science. In the case of copper, it's soft, it's malleable (easy to shape), and ductile (easy to pull into thin wires), it conducts electricity and heat, and it's attractive to look at. That's why its two main uses are in building construction and electrical and electronic equipment. Indeed, you're unlikely to find an electrical or electronic appliance without at least some copper in it somewhere. Since copper conducts heat well, it's also commonly used in cooking utensils, such as the copper-bottomed pans you can see in the top photo. Because it doesn't rust easily, it was once used to coat the bottoms of ships. The Statue of Liberty is also coated in copper—just imagine what she looked like when the copper was shiny, golden, and new! (You can see a superb recreation of her face in this Wikipedia photo.) 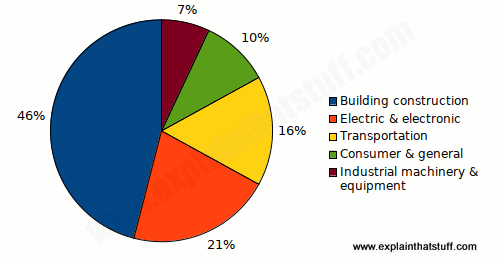 Chart: What do we use copper for? Copper (and copper alloy) use in the United States for 2021. Source: Figures from the Copper Development Association, Inc., quoted in USGS Mineral Commodity Summaries: Copper, January 2022. 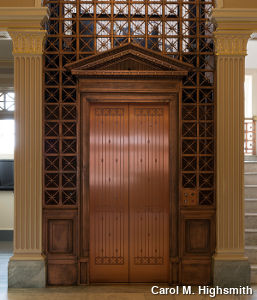 Photo: Most copper is used in construction, often out of sight in things like heating pipes, but occasionally in very decorative ways, such as this marvellous brass and copper elevator in the former Federal District Courthouse in Texarkana, Texas. Photo courtesy of The Lyda Hill Texas Collection of Photographs in Carol M. Highsmith's America Project, Library of Congress, Prints and Photographs Division. 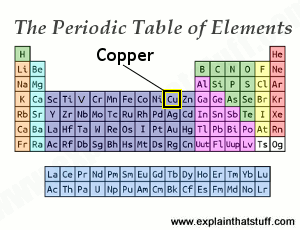 Artwork: The periodic table of chemical elements showing the position of copper. It's a relatively light element (near the top of the table) among the transition metals, in the same group as silver (Ag) and gold (Au), two other excellent conductors of electricity.