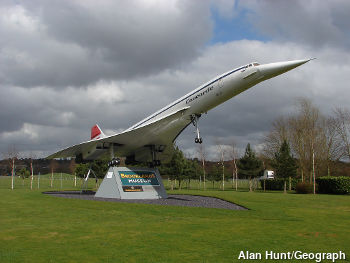 Concorde, they called it, but it could just as easily have been named Titan. Whizzing through the sky at twice the speed of sound (up to 2200 km/h or 1350 mph), the world's favorite supersonic plane was protected from air friction by a heat-proof titanium skin that could stretch as much as 25 cm (10 inches) during flight! It's not surprising titanium is the metal of choice in airplanes like this: it's as strong as steel but only about half as heavy and it doesn't go rusty. Although three quarters of the world's titanium is used in aerospace, you won't just find this metal soaring through the sky: it has a huge range of other applications, from the manufacture of toothpaste, false teeth, and wedding rings to the development of artificial hip joints and deep-diving submarines. Impressed? You will be! Let's take a closer look at how this amazing material works.

Photo: Concorde: a majestic titanium tube. Photo copyright © by Alan Hunt, originally published on Geograph under a Creative Commons BY-SA 2.0 license. Now retired from flight, the only Concordes we're likely to see these days are standing in museums.

Think "strong, light, and rustproof" and you have the essence of what makes titanium so important. It's a brilliant all-round material—similar to aluminum but very much stronger and quite a bit heavier.

Like aluminum, titanium is a silvery-white metal that resists corrosion (rusting): that's because it reacts readily with oxygen and forms a protective layer of titanium oxide that keeps out air and water. Titanium also resists attack by strong acids and alkalis. It's relatively hard and brittle when it's cold and you have to heat it up to work it into shape or draw it into wires. In chemical reactions, it forms lots of interesting compounds (when atoms of titanium bond to atoms of other elements); it also forms some extremely useful alloys (when titanium metal is "mixed" with other metals to combine their useful properties). 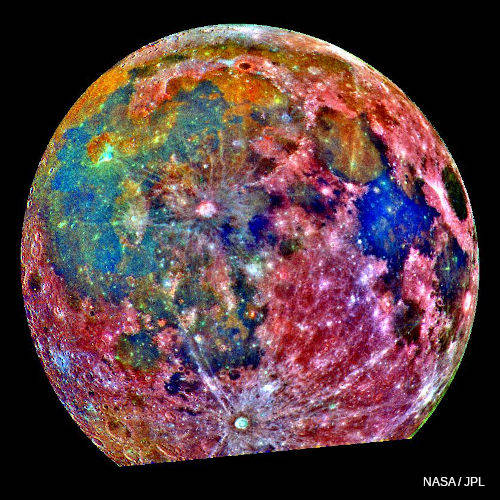 Photo: There's plenty of titanium on the Moon. This false-color photo is a composite of 15 images taken by the Galileo spacecraft. Areas colored blue are richer in titanium than those colored orange or red. The deep blue, titanium-rich patch on the right is Mare Tranquillitatis (Sea of Tranquility) where Apollo 11 landed in 1969. Photo courtesy of NASA Jet Propulsion Laboratory (NASA-JPL).

Perhaps the best-known use of titanium is in the compound titanium dioxide (TiO2 also known as titanium white), which is one of the whitest substances known. About 95 percent of the titanium consumed in the United States is used in titanium dioxide, which puts the whiteness in everything from paints, toothpastes, and paper to porcelain ceramics, floor coverings, textiles, and even concrete; the other 5 percent finds its way into welding rods, carbide manufacture, and a variety of smaller uses. [Source: USGS Minerals Commodity Summaries, January 2022.] 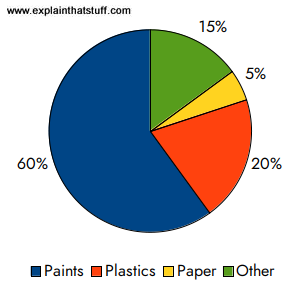 Chart: Where is titanium dioxide used? Most titanium is used in the form of titanium dioxide, and 80 percent of that, in turn, goes into paints and plastics. Drawn using data from USGS Minerals Commodity Summaries, January 2022.

Arguably titanium's use as a whitener is a trivial—if economically very important—use for such a versatile material, because it doesn't really matter what color our toothpaste and paint is: we could live without such things, if we really had to. 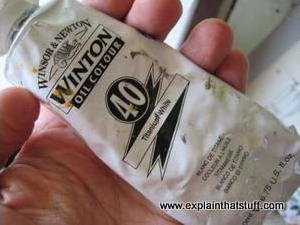 Photos: Everyday uses of titanium: Titanium dioxide puts the white color in white paint, which is why this tube is labeled "Titanium White."

But could we live without the titanium alloys that are used to make airplane parts? In some modern planes, titanium has been used in everything from the outer "skin" and the landing gear to the hydraulic pipes and the innermost parts of the jet engines (because it's light and good at withstanding high-temperatures and the stresses and strains caused by friction when air moves through at supersonic speeds). Since titanium is so useful in airplanes, it's not surprising it's used in spacecraft too. And in gleaming buildings like this. 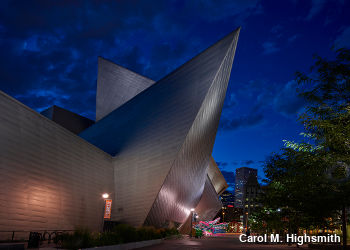 And what about medical items made from titanium—could we live without those? Many people have strong but flexible eyeglasses made from titanium alloys. Thanks to its protective oxide coating, titanium is a perfect metal for making things like replacement hip joints because it won't rust or react adversely with tissue or bone. The same quality makes it ideal for lining food manufacturing equipment. You can probably see that strength, lightness, and an ability to resist rusting in seawater for years on end also makes titanium a perfect construction material for submarines. 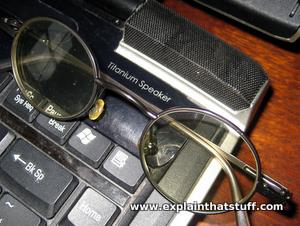 Photos: Everyday uses of titanium: My eyeglass frames are made from a nickel-titanium alloy. They're called shape memory frames because you can bend them and they'll spring straight back to shape. Behind them, the tiny loudspeaker on my laptop is also made from titanium.

Photo: Using sunlight and titanium dioxide to purify water. Photo of research at Sandia National Laboratories by courtesy of US Department of Energy.

New uses are being found for titanium all the time. In our environmentally conscious age, more people are installing heat-reflecting windows (also called low-E windows) to reflect heat back into their homes (or keep sunlight out) and save on heating and air-conditioning bills. A thin layer of titanium oxide (or another metal) on the glass is the secret ingredient that makes these windows work.

If titanium is so wonderful, why don't we use it everywhere? The main reason is that it's mined in relatively small quantities, so it's considerably more expensive than rival materials like steel. In 2022, world titanium metal production was a mere 200,000 tonnes or so (according to the US Geological Survey), while world steel production was ~2.0 billion tonnes (2000 million tonnes or 2,000,000,000 tonnes)—some 10,000 times greater (according to the World Steel Association). 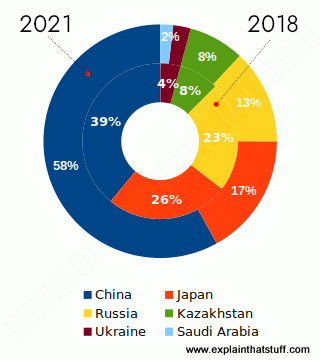 Although similar in many ways to aluminum, titanium is somewhat less common. While aluminum is the third most abundant element in Earth's crust, titanium ranks only ninth. Even so, it's still found in virtually all rocks, sands, soils, and clays, as well as in plants, animals, and water. Like aluminum, titanium's readiness to react with oxygen means it is never found on Earth as a pure metal. Instead, it has to be made from mineral ores called ilmenite (a complex compound of iron, titanium, and oxygen with chemical formula FeTiO3) and rutile (mostly titanium dioxide, a compound of titanium and oxygen with chemical formula TiO2) using a series of chemical reactions that can be difficult and costly.

Most titanium is now made by the Kroll process, in which titanium dioxide is reacted with chlorine to form titanium tetrachloride, which is then reacted with magnesium to strip away the chlorine and leave behind the pure metal (known as titanium "sponge"). So we have, essentially, a pair of chemical reactions that look like this: 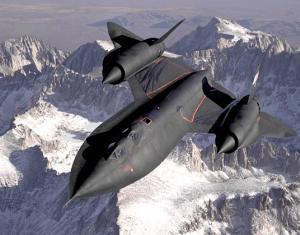 Photo: The SR-71B Blackbird. Titanium and titanium alloys stopped this plane from melting in the extreme heat generated by flying at three times the speed of sound (Mach 3). Photo courtesy of NASA Armstrong Flight Research Center. 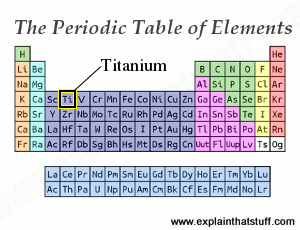 Artwork: The periodic table of chemical elements showing the position of titanium (Ti). Notice how early in the table it occurs; with just 22 protons, it's made of relatively small and light atoms. It's positioned right next to vanadium (V), so its atoms are of similar size, and that's why the two elements form many useful alloys.