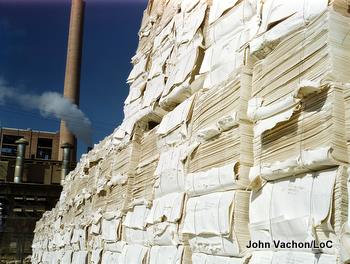 If you weren't glued to your computer screen right now, you might be reading this article on paper from a book; for about 2000 years until the appearance of the World Wide Web, virtually all written information was distributed in printed form. The idea of getting information from inked-up sheets of paper is starting to seem a little bit old-fashioned, but that doesn't mean we're going to ditch paper anytime soon. People have been predicting the arrival of the "paperless society" for decades and it still seems no nearer; if anything, we use more paper now than ever before—and not just for printing. Huge amounts of paper and card are still used for product packaging, in towels and diapers, and in a wide variety of building materials. It's probably no exaggeration to say that paper is the world's favorite material. Let's take a closer look and what it is and how it's made!

Photo: Even in the computer age, we still use vast quantities of paper. This photo could have been taken yesterday; in fact, it was shot in 1943 at the huge Southland Paper Mills near Lufkin, Texas, and shows newsprint (paper for printing newspapers) made from wood pulp using the Kraft process. Photo by John Vachon for the Office of War Information, courtesy of US Library of Congress.

Paper is a dried, compressed mat of plant fibers—nothing more, nothing less. It's a bit like clothing you can write on. No, really! Clothes are made by weaving together yarns such as cotton and wool spun from natural fibers. Paper is more like the fabric we call felt, made without the weaving stage by pressing together cellulose fibers extracted from plants and trees so they knit and fuse to form a strong, solid, but still very flexible mat.

How is paper made?

Most paper pulp is made from trees (mainly fast-growing, evergreen conifers), though it can also be made from bamboo, cotton, hemp, jute, and a wide range of other plant materials. Smooth papers used for magazines or packaging often have materials such as china clay added so they print with a more colorful, glossy finish. 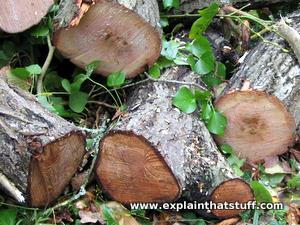 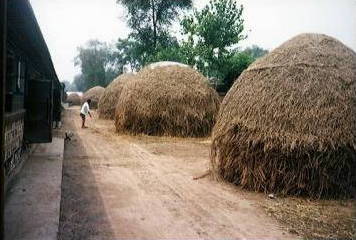 Photo: Paper can be made from lots of different materials. 1) Trees felled for papermaking. Although many different tree species can be used, hardwoods provide the bulk of the fibers in paper, while softwood fibers are used more for strength. 2) Stacks of hay waiting to be made into low-grade paper in Hebei Province, China. China and the United States are the world's leading paper makers, each producing close to 80 million tons of paper per year. Photo by Simon Tsuo courtesy of US DOE/NREL (US Department of Energy/National Renewable Energy Laboratory).

Here's the basic idea: you take a plant, bash it about to release the fibers, and mix it with water to get a soggy suspension of fibers called pulp (or stock). Then spread the pulp out on a wire mesh so the fibers knit and bond together, squeeze the water away, dry out your pulp, and what you've got is paper!

Paper is really easy to make by hand (try it for yourself) but people use so much of it that most is now made by giant machines. Whichever method is used, there are essentially two stages: getting the pulp ready and then forming it and drying it into finished sheets or rolls.

As you can see from the chart below, recycled paper (green line) has long since overtaken woodpulp (brown line) as the main source of raw materials. In Europe (EU plus Norway, Switzerland, and UK), about 71 percent of paper was recycled in 2021, compared to just 40 percent in 1991. Even so, very large amounts of wood are still consumed to make paper: roughly 152 million cubic meters of wood are used by the European paper industry each year (26.4 percent hardwood and 73.6 percent softwood), but only about 40 million cubic meters of that (less than a third) finds its way into papermills as usable pulp. [Source: Key Statistics: European Pulp and Paper Industry 2021, Confederation of European Paper Industries (CEPI), 2022.] 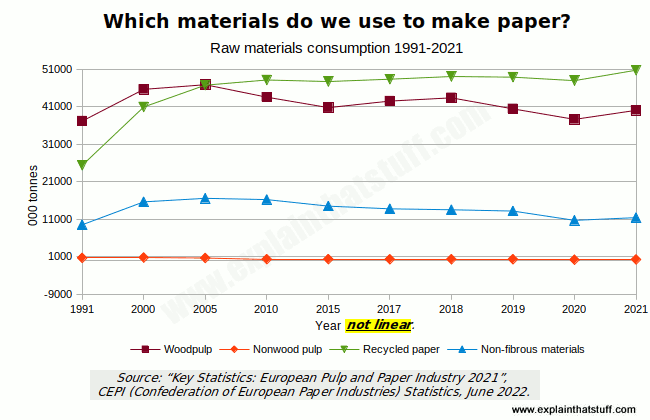 The raw plant material is placed in a large vessel filled with water and literally beaten to a pulp to make a thick suspension of fibers called half-stuff. This is formed into sheets of paper using a very basic frame made of two parts: a metal mesh called a mold that sits inside a wooden frame known as a deckle (a bit like a picture frame). The mold and deckle are dipped into the half stuff and gently agitated so an even coating forms on top, with most of the water (and some of the pulp) draining through. The deckle is then removed from the mold and the soggy mat of paper is placed on a sheet of felt. This process is repeated to make a number of interleaved sheets of paper and felt, which are then placed inside a screw-operated press and squeezed under immense pressure to squash out virtually all the remaining water. After that, the sheets of paper are taken out and hung up to dry. 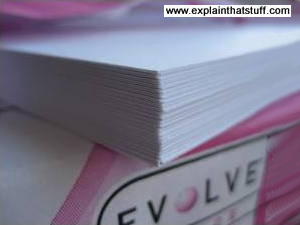 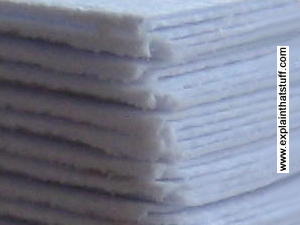 Photo: Look really closely at almost any ordinary paper and you'll see just how fibrous it is! The photo on the right is a closeup of the one on the left. It might look like a pile of folded fluffy bathroom towels, but really it's sheets of paper! This is 100 percent recycled Evolve paper made by M-real.

Although some expensive papers are still crafted by hand, most are churned out quickly, efficiently, and automatically by gigantic machines. Pulp is prepared for papermaking machines either mechanically or chemically. The mechanical method (generally used to make lower-grades of paper) is called the groundwood process, because the pulp was originally made by using huge stones to grind up logs. Nowadays, pulp is prepared by giant machines that cut, wash, chop, beat, and blend wood, rags, or other raw materials into a soggy mass of fibers. In the chemical method, known as the Kraft process (from the German word for "strength," because it produces strong paper), plant materials are boiled up in strong alkalis such as sodium sulfide or sodium hydroxide to produce fibers. At this point, loading materials (surface coatings such as clays), dyes (to make colored paper), and sizes (to strengthen and waterproof and prevent inks from spreading) can be added to the mixture to change the properties of the finished paper (sometimes they're added later). 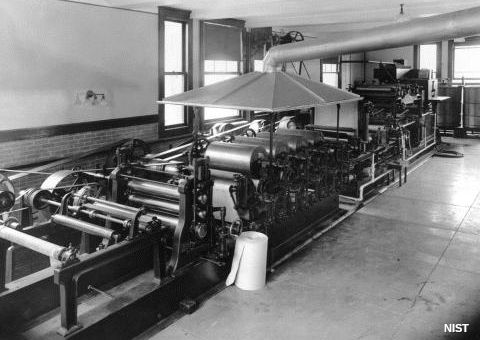 Photo: A small papermaking machine from the early 20th century. Photo by courtesy of National Institute of Standards and Technology (NIST) Photographic Collection.

Once the pulp has been prepared, it's turned into paper by an enormous roller machine. The best known type of papermaking machine is called a Fourdrinier machine (named for the two English brothers who invented it at the start of the 19th century), though there are alternatives (including the cylinder machine developed a few years afterward by John Dickinson). Wet pulp enters the machine from a trough called a headbox at one end and is spread over a moving, wire-mesh conveyor belt. The belt is shaken, sucked, and blown to remove water from the mat of fibers, before a watermark, texture, or other finish is pressed into it by a patterned roller called the dandy roll. The paper is then pressed further and fully dried, looping again and again around a series of rollers, before getting its final, very smooth pressing by large, heavy, steel rollers called calenders. The finished paper emerges as webs (very large sheets) or rolls (for printing things like newspapers and magazines). The biggest Fourdrinier machines produce paper at an astonishing rate of over 60km/h (40 mph)!

How does a Fourdrinier machine work?

Fourdrinier machines are large and complex, but I've simplified the process greatly and color-coded it so it's easier to understand. From wet pulp to finished roll, the paper passes through five key stages: it starts off in a large vat called the headbox (gray); begins to form into paper on the Fourdrinier table (blue); is pressed and dried by felt rollers (green); is further dried, shaped, and smoothed in the dryer (red); and is finally pressed and rolled into finished shape by the calenders (purple). The left side of the machine (as I've drawn it) is called the wet end; the right side is the dry end. 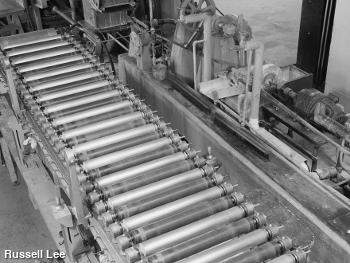 Photo: A detail of some of the rollers in a Fourdrinier machine. Photo by Russell Lee for the Office of War Information, courtesy of US Library of Congress.

In a bit more detail: 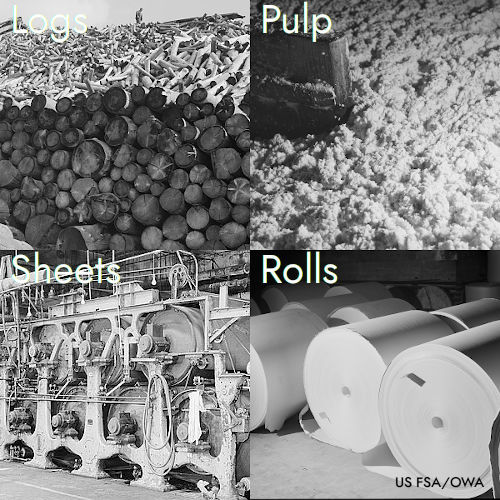 Photo: From logs to rolls of paper via wood pulp and the whistling wheels of a Fourdinier machine. Historic photos by Jack Delano and others, U.S. Farm Security Administration/Office of War Information, courtesy of US Library of Congress.

Who invented paper and papermaking?