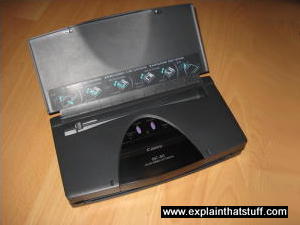 Twenty or thirty years ago, many people thought computers would make paper obsolete. The Xerox company, which pioneered photocopiers in the 1960s, became so worried that paper was going to disappear (and wipe out its lucrative business) that it set up a famous laboratory called PARC to develop computers instead. Ironically, even though Xerox PARC helped to invent the computers we all rely on today, paper stayed as popular as ever: people loved it and it was just good too an invention to replace. Now, thanks to the popularity of home computers and digital cameras, more people have printing machines in their homes than ever before—and most of them are inkjet printers. But how exactly do they work?

Photo: A portable Canon inkjet printer from the late 1990s. This one also works as a scanner if you replace the print head with a scanner cartridge. One thing to remember about very compact (portable) printers like this is that they have small print heads and small ink cartridges, which means you have to refill the ink more often—so (as explained below) they're a lot more expensive to run.

Let's rewind a few hundred years, back to the 15th century. There was some small-scale printing with wooden blocks before this time, but printing only really took off when a German printer named Johannes Gutenberg (c.1400–1468) invented something called movable metal type around 1450. If you've ever seen a typewriter (a personal letter-writing machine popular until computers came along in the 1980s), you'll know all about metal type. A typewriter has a keyboard like the one on a computer, but instead of making letters appear one at a time on the screen, it prints them directly onto a piece of paper. Inside the typewriter, there are metal letters called pieces of type. As you press the keys, the pieces of type hammer against a ribbon (a spool of fabric) covered in ink and make an impression on the paper. Gutenberg was the pioneer of metal type. He made thousands of little metal letters (printed in relief and in reverse) and moved them around inside wooden blocks so he could print any page he liked—hence the name "movable metal type".

Photo: The metal type in a relatively modern typewriter. The letters are backward so they print the right way round when they press an inked ribbon against the paper.

Typewriters were based on Gutenberg's invention and took off in the 1860s after American journalist Christopher Latham Sholes (1819–1890) and his partners made the first really practical typing machine (dozens of other people had tried before). Although typewriters were a brilliant invention, they could make only one copy of a piece of information at a time. Because they printed directly onto the paper, typing could be slow and messy and mistakes were difficult to correct. When business computers started to become popular in the 1960s, many people became interested in using them as word processors: highly automated typewriters that allowed text to be typed onto a screen, edited and corrected until it was perfect, and only then printed out onto paper.

Early computer printers borrowed heavily from typewriter technology, but it soon became obvious that better methods were needed for quicker and more efficient printing. Instead of using rows of metal levers to hammer letters against the page, as in a typewriter, computer printers (and electric typewriters, which were similar) started to use three other technologies. One of them was called a golf ball. The golf ball typewriter or printer has all the letters, numbers, and other characters it needs to print arranged on the surface of a metal ball. To print a word, the ball rotates at high speed until the right piece of type is facing the paper. Then it flips up and bashes the type against a ribbon, pressing the letter onto the page. Having done that, it spins round to the next letter... and so on. The second printing technology was called a daisy wheel, in which the type letters are arranged like petals around a central wheel. A bit like a golf ball, the daisy wheel rotates at high speed, stopping to press letters against the ribbon when they are in the correct position.

A third printing technology, known as dot-matrix, was popular from the 1970s until about the early 1990s. In a dot-matrix printer, there is no metal type at all. Instead, letters are printed by a matrix (a square or rectangular grid) of several dozen metal needles that press against a ribbon in different patterns to make whichever letter, number, or other character is required. Dot-matrix printers produce a characteristic "dotty" print finish that you still sometimes see on bills, invoices, and railroad train or movie-theater tickets. They were fast and relatively inexpensive (to buy and to run), but extremely noisy. 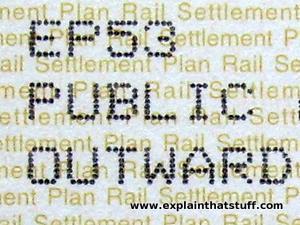 Picture: Using a pattern of dots to create letter shapes is the basic idea of dot-matrix printing. Old-style dot-matrix printers typically did this with a five by seven or seven by seven square (matrix) of metal needles. With smaller needles and more of them, you can make better-looking characters—but the printout still tends to look a bit dotty on close inspection.

Inkjet printers were really an evolution of dot-matrix printers. Instead of metal needles, they use hundreds of tiny guns to fire dots of ink at the paper instead. The characters they print are still made up of dots, just like in a dot-matrix printer, but the dots are so very tiny that you cannot see them. Different types of inkjet printer fire the ink in various ways. In Canon printers, the ink is fired by heating it so it explodes toward the paper in bubbles. This is why Canon sells its printers under the brand name "Bubble Jet." Epson printers work a slightly different way. They use an effect called piezoelectricity. Tiny electric currents controlled by electronic circuits inside the printer make miniature crystals jiggle back and forth, firing ink in jets as they do so. You can think of inkjet printers very simply as a firing squad of nozzles rattling off millions of dots of ink at the paper every single second!

How does the ink get onto the page? It's a slightly different process in a bubble jet and an inkjet...

In Canon Bubble Jet printers, it goes a bit like this: 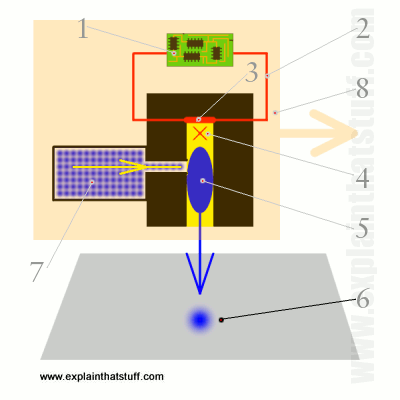 In a piezoelectric inkjet, it's slightly different: 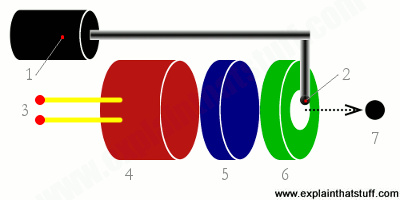 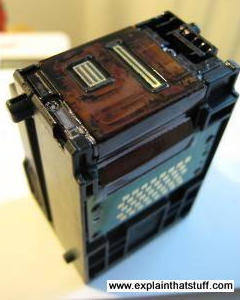 Photo: Here's the print head (sometimes called a print cartridge) removed from my inkjet and turned upside down, showing the slits where the inkjet nozzles are located. The single long slit on the right is where black ink comes out. The three smaller slits on the left are for the three colored inks that make color prints. Note the pattern of copper connectors on the front that connect the cartridge to the printer's electronics.

Like dot-matrix printers, inkjets make their print with a pattern of dots. The difference is that where a dot-matrix uses maybe 64 metal needles to make 64 dots per character, inkjets fire thousands of dots to make much higher print quality. Even an average inkjet can print 600 dots per inch (dpi), which is about ten times better than the crudest dot-matrix. A really good photo-quality inkjet can print at nearly 5000 dpi. Where a dot-matrix printer makes a horrible screaming sound as its print needles tear across the page, the only noise an inkjet makes comes from the sheets of paper feeding in and out and advancing through the mechanism.

The inkjet nozzles build up a whole page of text or graphics from millions of separate dots. Controlled by your computer, the ink cartridge scans from left to right across the page and back again, depositing ink as it goes. Each time it reaches the end of a line, the paper advances forward slightly so the next line can be printed.

What are the main parts of an inkjet printer?

With the front of my printer open, you can clearly see all the important bits: 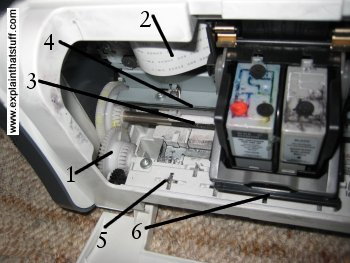 Ink is the hidden cost of inkjet printing

Inkjet printers are extremely cheap to buy; even all-in-one printers, with scanning and basic "photocopying" (which involves scanning and then printing) built into the same machine are remarkably inexpensive. Before you marvel at what a great deal you're getting, take a moment to ponder how printer makers can afford to do this: they earn their money not from the printers but from the inkjet cartridges you'll keep feeding into them forever more (the so-called razor-and-blades business model). Considering that inkjet cartridges are little more than tiny plastic boxes with ink-filled sponges inside, they're very expensive. The printers themselves seem designed to use as much ink as they possibly can with endless nozzle-cleaning maintenance routines (each one of which uses a bit more ink). 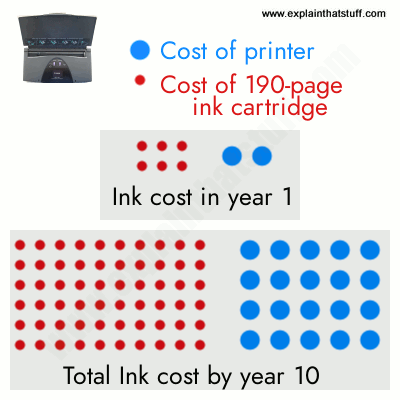 Artwork: Printing a modest 20–25 pages a week, you can expect to spend twice as much on ink each year as you spent originally on your computer. So, over 10 years, you'll spend 20 times more on ink than you spent on your printer. Based on real figures for a typical popular printer.

What can you do to make your ink (and money) go further? When you're shopping for a printer, be sure to check detailed consumer reviews. Look out for a model with a refillable ink tank or other ink-saving features; make sure it will accept cheap compatible cartridges to save you buying the manufacturer's expensive originals and (if you don't mind getting your hands dirty from time to time) see if you'll be able to refill the cartridges yourself using an ink bottle and syringe (YouTube will show you how). Print in draft mode whenever you can (it's faster and uses less ink) and try experimenting with ink-saving fonts. A number of independent testers have concluded that Century Gothic, Calibri, and Times New Roman save a considerable amount of ink compared to Arial, most people's default Microsoft font. You can find more tips for saving money on ink at Consumer Reports.

Artwork: Switching from Arial to Times New Roman uses about a quarter less ink, according to Consumer Reports. But don't get too carried away: saving money on ink won't save money in your company if it takes people longer to read things.

Although various inventors experimented with inkjets through the second half of the 20th century, inkjet printing technology was only commercialized by Canon in the early 1980s. For the real technical nitty-gritty, patents filed by pioneering inventors are always worth a look. Here's a small selection of the many covering inkjets and bubble-jets: