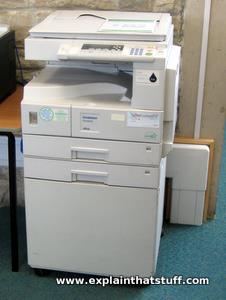 Big companies sometimes make big mistakes. When American inventor Chester Carlson (1906–1968) approached some of the world's largest corporations with his idea for a photocopying machine, during the 1940s, they simply didn't want to know. They couldn't imagine who would want to make lots of copies of documents. It took Carlson years to turn the idea into one of the most important office inventions of the 20th century—and those companies kicked themselves when they realized just how big an opportunity they'd missed. Photocopiers look complex, but they work using two pretty simple pieces of science. Let's take a closer look inside!

Photo: A typical photocopier in a public library. This one is made by Gestetner and, unlike many office copiers, doesn't have a sheet feeder built into the top (because it's primarily used for copying books). The finished paper copies curl through the mechanism and appear in the empty space you can see underneath. The drawers at the bottom hold spare paper. 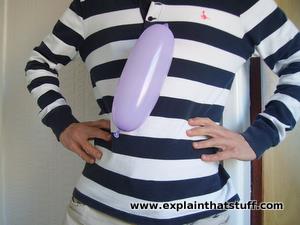 Photo: Look, no hands! Static electricity can "glue" things together using opposite electrical charges. This science is put to practical use inside a photocopier.

What's light got to do with electricity?

Static electricity is one of the two scientific tricks that makes a photocopier work. Now let's explore the other: photoconductivity.

If you believe what you read in science books, you probably think light and electricity are totally different things. Light comes from the Sun and powers things like flashlights; electricity flows round wires and makes things like vacuum cleaners and refrigerators work. So light has nothing to do with electricity, right? Wrong! Light is actually a kind of electricity. A ray of light is an ultra-fast wave of electricity and magnetism wiggling back and forth and zapping through space. That helps us to explain how solar power (making electricity from sunlight) works. When sunlight shines onto a solar panel, the solar cells inside it soak up the electrical energy in the light and convert it back into an electrical current (flow of electrons) that can be used to power something.

There's something similar to a solar cell in a photocopier and it's called a photoconductor. Instead of producing an electric current when light shines onto it, it captures the pattern of the light as a pattern of static electricity. What use is this? Suppose you shine a flashlight at your hand to cast a shadow image of a rabbit's ears on the wall. But instead of shining the shadow on the wall, you shine it on a photoconductor. Some parts of the photoconductor will be brightly lit (where the light passes around your hand) and some parts will be dark (where your hand casts a shadow). The photoconductor will gain an electrical charge where it is light and no charge where it is dark. In other words, it will have a kind of "electrical copy" of your hand. This is the key to how a photocopier works. 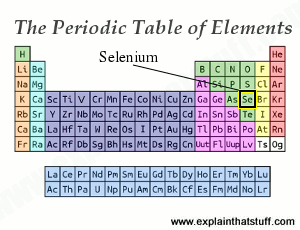 Artwork: Selenium—the power behind early photocopiers—is a relatively rare, semimetallic chemical element in the same group (16, formerly known as VI, VIA, and VIB) as oxygen and sulfur.

So what's this magic photoconducting material? Early copiers used photoconductors made from a glassy (vitreous) form of the rare chemical element selenium; later ones used improved materials such as selenium telluride, which proved better for high-volume copying. Selenium has been prized for its ability to turn light into electricity since the 1870s, originally discovered by English electrical engineer Willoughby Smith and later developed by science professor William Grylls Adams, and his student Richard Evans Day. Their work—marrying light and electricity—paved the way for television, photoelectric cells, solar cells—and, of course, photocopiers. Modern copiers have tended to dispense with selenium in favor of photoconductive polymers (plastics).

“The need for a quick, satisfactory copying machine that could be used right in the office seemed very apparent to me—there seemed such a crying need for it—such a desirable thing if it could be obtained. So I set out to think of how one could be made.”

After a great deal of research and tinkering in his laboratory, Chester Carlson figured out how he could use these two bits of science—static electricity and photoconductivity—to help him make copies of documents.

Suppose you want to copy a page from a book. If you shine an extremely bright light on the book, you can make a shadow of the black and white characters on the page, just like casting a shadow of your hand. If you shine the light onto the page at an angle, it doesn't reflect straight back: it bounces off at an angle. So, by shining the light at an angle, you can throw a shadow of the page onto another object. Let's suppose you put a photoconductor nearby and throw the image of the page onto that. You won't create a shadow on the photoconductor—you'll make a pattern of electrical charges: an electrical version of a shadow. Now if we sprinkle ink powder over the photoconductor, toner particles will stick to the charged areas of this "electrical shadow" like tiny little balloons sticking to your pullover. All we have to do then is press a piece of paper onto the photoconductor to lift the ink away. Hey presto, the paper has a copy of the original page! This whole process, which Carlson named xerography (combining two Greek words to mean "dry writing"), is automated inside a photocopier and can happen over and over again very quickly.

In case that's not clear, I'll go through it all again, exactly as it happens inside the copier, in the box below.

How a photocopier works

How a modern copier works 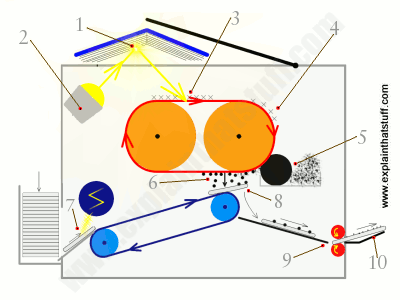 What happens in a modern copier isn't so very different from the process that Chester Carlson originally designed. We can see that by taking a look at one of the design drawings from his original photocopier patent. I've colored and simplified the numbering to show roughly what's happening: 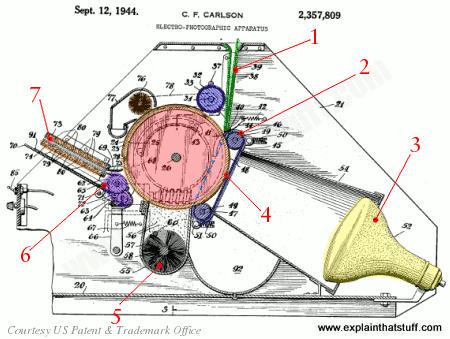 Artwork: Chester Carlson's original photocopier from his patent granted on September 12, 1944. Courtesy of US Patent and Trademark Office.

As you can see from all the dozens of small numbers on the original drawing, this is a very simplified account of what's really happening—and all the parts and pieces that are involved. You can read a much more detailed explanation by taking a look at Chester Carlson's patent, listed in the references below. Although technical, it's very readable and fairly easy to understand. 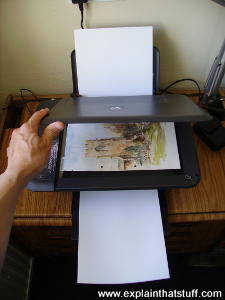 Photo: This Hewlett-Packard all-in-one printer, scanner, and copier is the simplest kind of digital photocopier, though it's much less sophisticated than a full-scale office copier. It scans a document (with a built-in optical scanner) and then uses an inkjet printer to make a black-and-white or color copy. Unlike an ordinary scanner or printer, it doesn't need to be connected to a computer to make copies.

Copiers that work like this are essentially using analog technology: they scan an original document and reproduce it—using nothing more than optics and static electricity—as a faithful copy. From 1949, when the very first Haloid XeroX photocopier went on sale, to the early 1980s, all copiers worked this way. Everything changed in 1981 when Ricoh patented a crude digital photocopier. The first digital copiers from Ricoh, and later Canon, went on sale several years later.

Today, analog copiers are essentially museum pieces and most copiers work digitally: they scan a document using an image-sensor chip (CCD or CMOS), create a digital version (typically a JPG or TIFF file), and then print that digital image in exactly the same way as an inkjet or laser printer. Since they scan very hi-resolution digital images, they can reproduce with the same resolution as a high-end laser printer (several times better than an analog copier). Once a document is in digital form, it's easy to enlarge or reduce it by any amount. Digital copiers also produce "cleaner" copies with better control of the image density and contrast than analog copiers.

You can really think of a digital copier as a combined scanner and printer, coordinated by a built-in computer; and, indeed, the popular all-in-one print, scan, copy, and fax machines you can buy for home offices work just like this, with separate scanning, printing, and faxing "modules" hooked together. They start with a digital image (either a document you've scanned, a fax from a phone line, or something received from a computer through a USB cable or wireless connection—Wi-Fi Direct or Bluetooth), store it, and then print it. Some digital machines allow limited editing of documents before they're printed. Some let you save documents for printing again later (without the need to rescan them) on a built-in hard drive, flash drive, or SD card. Copiers with memories also make it much easier to duplicate complex, multi-page documents without the need to scan any of the pages more than once.

Although digital copiers are versatile, convenient, and inexpensive, there are some risks of using them in offices or other shared/public places. If they have hard drives, the documents they process are usually stored there, which can create a security risk: even when documents are deleted, recoverable traces can be left behind. Some copiers use encryption to get around this, while others take pains to erase documents from their hard drive more thoroughly and securely.

How a digital photocopier works

Here's one of Ricoh's original digital copier designs, taken from a patent they were granted in 1992. I've colored it to make it a bit easier to understand and simplified the numbering. Although there are dozens of intricate little bits and pieces, I'll just give the gist of how it works. If you want more detail, you can dig out the patent for yourself (referenced in the caption below the image). 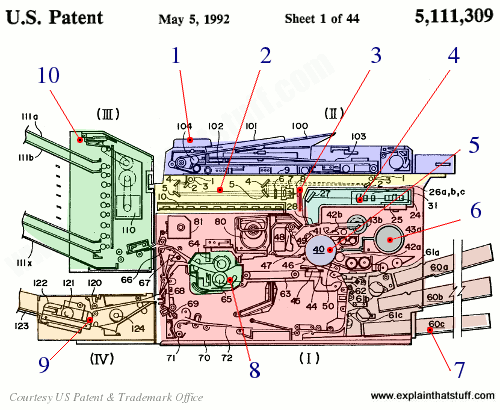 Artwork: An early Ricoh digital laser photocopier. From US Patent #5,111,309: Density control system for a digital copier by Seiji Sakata, Ricoh, May 9, 1992, courtesy of US Patent and Trademark Office.

A brief history of photocopiers 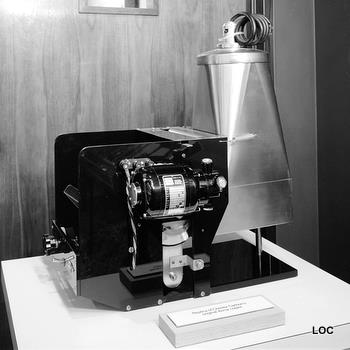 Photo: A replica of Chester Carlson's original photocopier, courtesy of US Library of Congress.