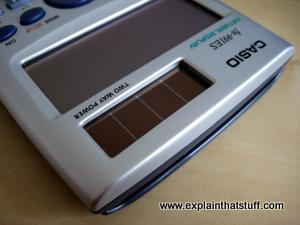 Have you ever been in one of those restrooms where the faucets come on automatically when you wave your hands underneath them? Or walked through an electric door that opened just as you approached? Maybe your home is fitted with invisible "magic-eye" beams that "trip up" intruders by sounding an alarm? Or perhaps you've got a calculator that makes power with a little built-in solar panel? All these things are examples of photoelectric cells (sometimes called photocells)—electronic devices that generate electricity when light falls on them. What are they and how do they work? Let's take a closer look!

Photo: The mini solar panel on this pocket calculator uses a type of photoelectric cell known as photovoltaic: when light falls on it, it produces enough voltage to power the display and the electronics inside.

"Photo" means light, so photoelectricity simply means electricity produced by a light beam. That idea doesn't seem at all unusual in the 21st century, when most people have heard of solar panels (lumps of material, such as silicon, that generate an electric current when sunlight shines on them). But imagine how amazing the photoelectric effect must have seemed a little over a century ago, in 1887, when it was first discovered by German physicist Heinrich Hertz (1857–1894), one of the pioneers of radio. It remained something of a mystery for almost 20 years until Albert Einstein weighed in with an almost complete explanation of the phenomenon in 1905.

What is the photoelectric effect? 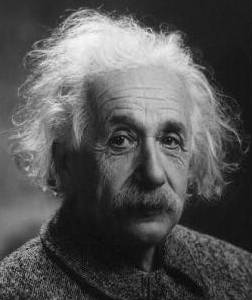 Photo: Albert Einstein won the Nobel Prize not for relativity—his best-known contribution to physics—but for his earlier work on the photoelectric effect. Photo courtesy of US Library of Congress.

“The quanta of energy penetrate the surface of the material and their respective energies are at least in part changed into the kinetic energy of electrons.”

How can light magically transform itself into electricity? It's not as strange as it sounds. We know, for example, that light is a kind of electromagnetic energy: it travels in the same way (and at the same speed) as X-rays, microwaves, radio waves, and other kinds of electromagnetism. We also know that energy can readily be transformed from one kind into another: potential energy can be turned into kinetic energy and either can be converted into heat or sound. So the idea that light might be turned into electricity isn't all that surprising.

Yet, when photoelectricity was first explained, in 1905, it marked the beginning of a scientific revolution. The person who did the explaining, Albert Einstein (1879–1955), showed that a light beam, shining on something like a piece of metal, could be thought of as a train of energetic particles called photons. The photons passed their energy in fixed quantities to atoms inside the metal, knocking some of their electrons out of them, so producing an electric current. 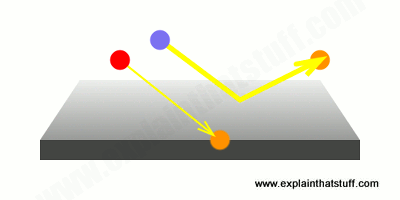 Artwork: The photoelectric effect: When photons of light (left) hit a sheet of metal, they pass their energy to electrons (orange) in the metal, knocking some of them out to produce an electric current. You might think a brighter or closer (more intense) light would knock out electrons with more energy, but that isn't the case. The energy of the emitted electrons doesn't depend on the intensity of the light but on its colour (frequency): the higher the frequency, the more energy the photons have, and the more they can pass on to the electrons in the metal. Photons of higher-frequency violet light have more energy than photons of lower-frequency red light, so they're more likely to knock electrons out (and liberate them with higher energy). The photons need a minimum threshold frequency (a minimum amount of energy) to free electrons and produce a photoelectric effect, known as the work function. In the example shown here, the violet photons have enough energy to knock out electrons, but the red photons don't.

As Einstein showed mathematically, the energy of the incoming photons was precisely related to the frequency or wavelength of the light shining and equal to the energy of the electrons they ejected. Einstein's explanation of the photoelectric effect was powerful evidence that energy could exist only in fixed amounts called quanta. (In other words, you can get energy in family-sized packs but you can't split the packs up any smaller!) This became the central element of quantum theory: a complex, mathematical explanation of the mysterious world of atoms and the particles lurking inside them. And it was for this work on photoelectricity that Einstein won the Nobel Prize in Physics 1921.

Photoelectricity is about light energy being converted into electrical energy and it happens in three different (though, on the face of it, quite similar) ways. They're known as the photoconductive, photoemissive, and photovoltaic effects—and we'll look at each one in turn.

Incidentally, when I talk about light in this article, I don't just mean the "visible" light we can see: photoelectric cells also work with invisible forms of light such as infrared and ultraviolet: light-sensitive materials can "see" and respond to frequencies of light outside the range to which our own eyes are sensitive.

This is the easiest of the three effects to understand. When I was a teenager, I remember briefly playing around with an electronic component called a light-dependent resistor (LDR). It was like a small button with two terminals coming out of the back and you could solder it into a circuit much like any other resistor. The surface of the "button" had a lens on top of it (to concentrate incoming light) and, under the lens, there was a piece of light-sensitive material made from something like calcium sulfide, with a snake-like pattern of electrical connections running across it. In darkness or normal light, the LDR had a fairly high resistance but if you shone a light directly at it, the resistance decreased quite dramatically: the LDR was converting incoming light into electrical energy and adding it to the current already passing through. This is an example of the photoconductive effect, where light reduces the resistance of a material (or increases its conductance, if you prefer) by making the electrons inside it more mobile.

Photo: A roof-mounted solar panel made from photovoltaic cells.

Small solar panels on such things as calculators and digital watches are sometimes referred to as photovoltaic cells. They're a bit like diodes, made from two layers of semiconductor material placed on top of one another. The top layer is electron rich, the bottom layer, electron poor. When you shine light on the top layer, electrons leap up from the bottom layer to the top, making a voltage that can drive current through an external circuit—so providing what we think of as solar power. Read more about photovoltaics in our main article on solar cells.

Photoemissive cells are are the oldest and most elaborate way of turning light into electricity. They're sealed glass vacuum tubes (from which the air has been completely removed), inside which there's a large metal plate that serves as a negative terminal (or cathode) with a smaller, positively charged, rod-like terminal (or anode) running inside it. The negative terminal is made from a light-sensitive material. When light photons fall on it, they force electrons to leap out of it and these are promptly attracted to the positive terminal, which collects them and channels them into a circuit, producing electric power. This basic design is called a photoemissive cell or phototube. In a slightly different design called a photomultiplier, there's a whole series of plates arranged so that one incoming photon releases multiple electrons—effectively amplifying an incoming light signal so it produces a bigger electrical response.

What are photoelectric cells used for? 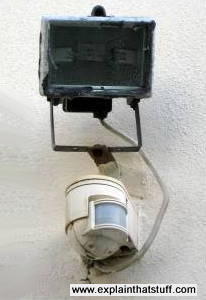 Photo: The photoelectric security light mounted outside the building where I live: When the photoelectric detector (bottom) senses movement, the light (top) switches on automatically for several minutes.

All three types of photoelectric cell can detect light or convert it into electricity, but in practice they have quite different uses.

Like miniature power plants, photovoltaic cells are designed to produce steady supplies of useful, electric power. From small solar cells on electronic calculators to completely photovoltaic roofs, their job is essentially to produce a constant supply of electricity that we can use to power electric appliances or store in batteries for later. 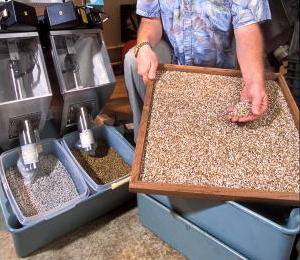 Photo: How can you tell male flies from female ones? Melon fly pupae are either brown (if they're male) or white (if they're female). They can be separated by tipping them into a photoelectric sorter, which shines a light on each pupa, detects how much light is reflected back with a photocell, and then sifts the pupa into one box or the other according to its color. The same apparatus can be used for sorting seeds. Photo Stephen Ausmus courtesy of US Department of Agriculture Agricultural Research Service.

Photoconductive cells such as light-dependent resistors are more likely to be used as light detectors in such things as automated washroom faucets, intruder alarms, doorways that open automatically, smoke alarms, carbon monoxide detectors, and so on. Typically, they have a beam of infrared light shining permanently on a light-dependent resistor and producing a steady electric current. When you move in front of the detector, you break the beam and stop the light reaching the resistor, so its resistance changes and it suddenly produces much less current. An electronic circuit detects the change in current and triggers whatever action the circuit is designed to take—turning on a faucet, opening a door, sounding an alarm, or whatever it might be. Photoconductive cells are also used as light detectors in cameras and for reading and decoding the soundtracks on old-style movie reels. The CCD or CMOS image sensor that captures a photo in your digital camera or smartphone is a more sophisticated version of the same idea. In weaponry, some designs of proximity fuses use photoelectric cells to detect when missiles have reached the target. The missile fires out light (or radio waves) and an onboard photoelectric cell (or radio receiver) "listens" for reflections. When the reflected waves suddenly increase, the missile assumes it's near its target and detonates.

Photo: A typical World War II photoelectric proximity fuse: the T-4, which dates from 1941. It detonated when an onboard photocell detected a sudden change in light intensity. Photo courtesy of National Institute of Standards and Technology Digital Collections", Gaithersburg, MD 20899.

Phototubes were originally used as light detectors too, but they're relatively cumbersome, elaborate, and expensive; smaller and cheaper electronic components like LDRs are now more widely used as light-detectors instead. Photomultipliers are still used in scientific applications, such as detecting radiation of different kinds, and in gadgets like night vision goggles, where they intensify the dim light of a night-time scene so it can be seen more clearly.