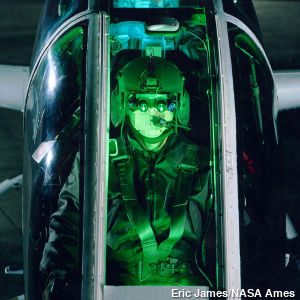 How many times has someone said to you: "If you eat all your carrots, you'll be able to see in the dark." If there were any truth in that, soldiers, sailors, and pilots wouldn't go anywhere without a carrot stuffed in their pocket. Much more useful on the battleground are night vision goggles: electronic eyes that boost weak night-time vision into something many times more powerful. If you want to fight wars at night or watch wildlife in the twilight, night vision goggles are the way to go—but how exactly do these clever bits of kit turn darkness into light? Let's take a closer look!

What kind of night vision do animals use?

Humans are built for living in the daytime and sleeping in the dark. The retina (the light-sensitive part of our eyes) has cells called cones (for seeing colored light) and rods (for detecting movement and dim light). We have 20 times more rods than cones (120 million rods and only 6 million cones), yet we're still not very good at seeing in the dark. [1] 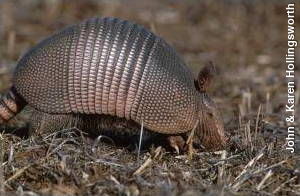 Photo: The armadillo is generally a creature of the night. Photo by John and Karen Hollingsworth courtesy of US Fish and Wildlife Service.

Other animals are built differently. Creatures that live in the dark tend to have much bigger pupils (holes in front of their eyes) to let in more light. Tarsiers, for example, have enormous eyes relative to their body size. Like other nocturnal creatures, their retinas contain many more rods than the human eye. Cats, which also spend much of their time hunting at night, are among creatures whose eyes contain a tapetum. This is a natural mirror that reflects light back out of the eye. Its job is to bounce the incoming light twice through the retina so the animal has double the chance to see things. That's why cats are so good at seeing in the dark—and why, when you shine at torch at them, their eyes reflect light straight back like mirrors.

Humans can't use any of these tricks. Our pupils open wider in dim light, but not wide enough to help us that much at night. Our eyes don't have enough rods—and we don't have a tapetum. So what can we do to see at night? We can reach for technology!

How to invent night vision 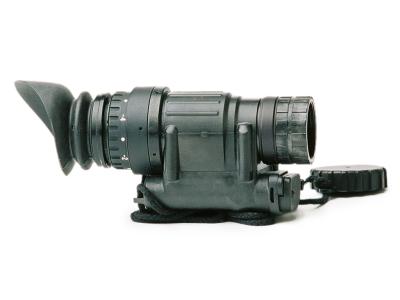 Imagine your job is to invent a pair of eyeglasses that will help people see at night. It's obvious what you have to do. Light rays will travel into the glasses at the front, so you must capture them somehow, boost them in strength, and then fire them into the person's eyes. But how can you capture and boost light? Binoculars, telescopes, and even ordinary eyeglasses will bring light to a focus, but they don't make it any brighter. It's easy to invent a pair of glasses that make things dimmer: you just coat the lenses with something that absorbs some of the light—and that's how sunglasses work. But glasses that make things brighter are a tall order.

Electricity, on the other hand, is very easy to boost in strength. People have invented all sorts of electrical devices that take in a small electric current (flow of electricity) at one end and produce a bigger flow at the other. Something that does this is called an amplifier. A hearing aid, for example, uses a tiny electronic component called a transistor to amplify sounds (increase their volume) captured by a microphone so that someone hard of hearing can listen to them more easily. An electric guitar uses a much more powerful amplifier to turn the plucking sounds the strings make into sounds that can fill a stadium.

So here's a way to invent goggles that boost light. What if we turn the light into electricity, boost the electricity, and then turn the boosted electricity back into light? That should make the light much brighter so we can see even at night. This unlikely sounding trick really does work—and it's how night vision goggles help us to see. 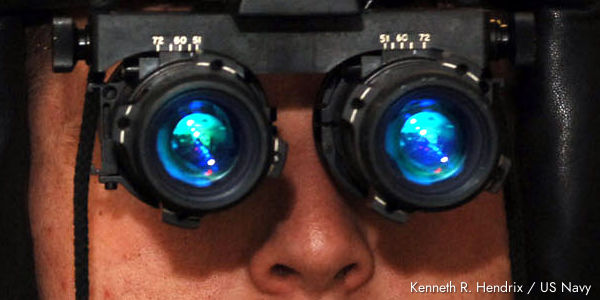 Photo: Night vision goggles are an extension of your own vision. Photo by Kenneth R. Hendrix courtesy of US Navy and Wikimedia Commons.

How do night vision goggles work? 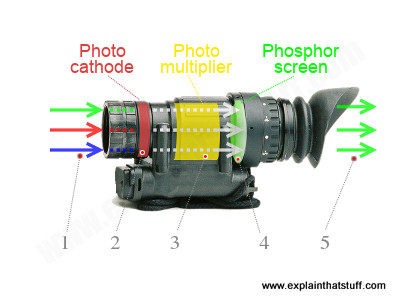 Photo: Artwork by explainthatstuff.com based on the photo up above, courtesy of US Army. Please note that this is a generalized illustration of what happens in night vision goggles; it doesn't represent precisely how the Land Warrior device shown in the photo actually works. 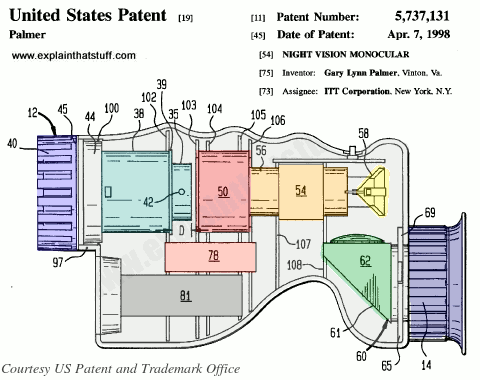 Artwork: From US Patent 5,737,131: Night vision monocular by Gary L. Palmer, ITT Corporation, April 7, 1998. Courtesy of US Patent and Trademark Office (with colors added for clarity).

In reality, as you can see from this patent illustration of a Land Warrior-type night vision monocular designed by Gary Palmer of ITT, the image-boosting photocathode and photomultiplier—the image intensifier components—represent only the central part of a more complex (but still relatively conventional) optical system. Don't be confused by all the details; I've colored and highlighted a few of the key bits to show how everything fits together. Using the numbers from the artwork and working from left to right: 40 is the objective lens (the lens closest to the object you're looking at); 42 is essentially a focusing mechanism; 50 is the image intensifier unit (corresponding to parts 2,3, and 4 from my simplified artwork above); 54 is a collimator that narrows and aligns the light rays passing through it; 58 and 62 are mirrors; 14 is the eyepiece. At the bottom, 78 is a voltage regulator and 81 is the battery pack. 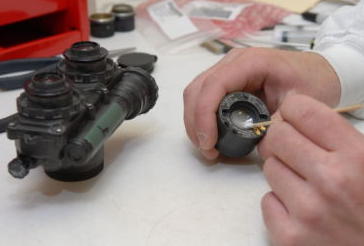 Photo: Night-vision goggles have to be kept clean just like ordinary eyeglasses. Here, an electronics worker is cleaning out the photomultiplier (also called an image intensification tube). Photo by Tracey Condi courtesy of U.S. Army.

Why does everything look green through night vision goggles?

Even at night, the photons that hit the lens at the front of night vision goggles are carrying light of all colors. But when they are converted to electrons, there's no way to preserve that information. Effectively, the incoming, colored light is turned into black and white. Why, then, don't night vision goggles look black and white? The phosphors on their screens are deliberately chosen to make green pictures because our eyes are more sensitive to green light. It's also easier to look at green screens for long periods than to look at black and white ones (that's why early computer screens tended to be green). Hence, night vision goggles have their characteristic, eerie green glow. 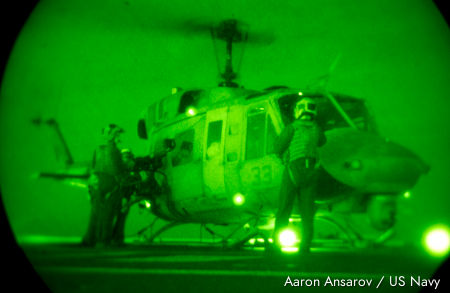 What if there really is no light?

Night vision goggles like the ones described above are sometimes called image intensifiers, because they take the tiny amount of light that's available in near darkness and boost it enough for our eyes to see. But sometimes there just isn't enough light to do this—and image intensifier goggles simply don't work. Suppose, for example, you're a firefighter trying to see if there's anyone trapped inside a smoke-filled building, An image intensifier would be as useless as your own eyes. 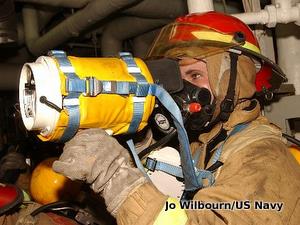 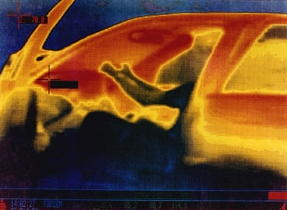 Photo: An infrared thermal image (thermogram) of a car parked in sunlight: here different colors show different temperatures, with red and yellow hottest and blue coldest. You can see how the inside of the car and its metal bodywork are far hotter than the air outside it. Photo courtesy of US Department of Energy.

The alternative is to use what's called thermal imaging. Instead of looking for the light that objects reflect, we look for the heat they give off instead. Generally, living things moving around in the darkness are going to be hotter than their surroundings; that goes for vehicles and machines too. Hot objects give off infrared radiation, which is a similar kind of energy to light but with a slightly longer wavelength (lower frequency). It's relatively easy to make a camera that picks up infrared radiation and converts it into visible light: it works like a digital camera except that the image detector chip (either a charge-coupled device (CCD) or a CMOS image sensor) responds to infrared instead of visible light; it still produces a visible image on a screen the same way as an ordinary digital camera. Other types of thermal imaging cameras use different colors to indicate objects of different temperature—and they're commonly used to show things like the heat loss from badly insulated buildings.

How does a thermal image sensor work?

Rescue workers and firefighters don't always have free hands to carry things, so not all thermal imaging cameras are handheld. Here's a handy helmet-mounted camera designed especially for those sorts of extreme situations. I've colored most of the main components to make it slightly easier to follow. The infrared camera unit (gray) mounted on the cap of the helmet (yellow) captures a thermal image, which circuits inside (green) decode, amplify, and convert into a form that can drive a traditional display (red). A bendy, articulated cable (blue) carries electrical signals from these circuits to the display, which (in this example) is positioned in front of the wearer's right eye. 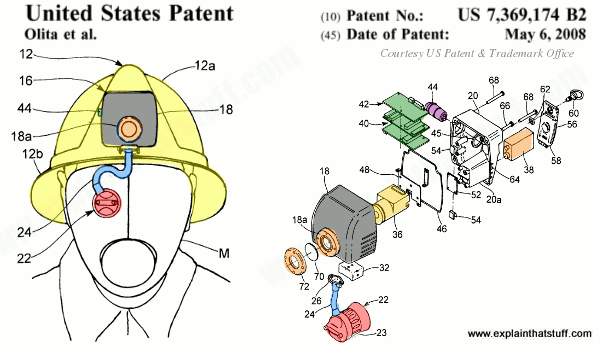 Artworks: A thermal camera with helmet mounting. Left: Front view showing how the camera and its eyepiece are attached to the helmet; Right: Exploded view. US Patent 7,369,174: Helmet-mounted thermal imaging system by Jules Olita et al, Sage Technologies, May 6, 2008, courtesy of US Patent and Trademark Office.

The main components in the left image are:

How else can we see in the dark?

Planes, ships, and submarines find it easy to find their way around even when there's little or no light for pilots and captains to steer by. Instead of hungrily hunting for whatever photons they can find, they use a variety of sophisticated navigation tools and sensors, including radar (seeing with radio waves), sonar (sound navigation), GPS (satellite navigation), compasses, and lidar (a kind of laser-based radar). Self-driving cars use a similar mix of technologies to drive in daylight or at night. Now you can't really describe these sorts of things as "seeing": they don't take in the full range of what our own eyes and brains do—from 3D object recognition and color perception to figuring out distances and much more. But they work well as "eyes on machines" when human eyes don't have enough light to see by.

Here's a selection of patents that will give you a deeper technical insight.