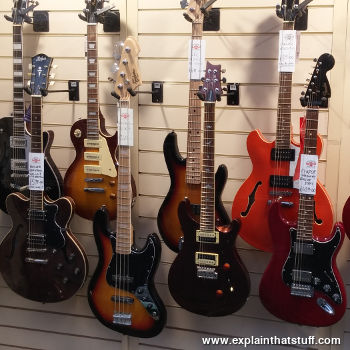 The physics of electric guitars

If you had to write a soundtrack for the 20th century, electric guitars would almost certainly be playing the tune. No other instrument defines the angry rebelliousness of the modern age quite like it. Who could forget Chuck Berry, Jimi Hendrix, the Rolling Stones, or Nirvana—some of the greatest exponents of guitar-driven rock? But if you think playing an electric guitar is all about attitude and dexterity, think again: it's actually about the science of electromagnetism. Let's take a closer look a how these amazing instruments turn electricity into sound.

Photo: Electric guitars for sale in a store window. Left to right, we have guitars by Gretsch, Hofner, Revelation (two of them), G&L, PRS, Ibanez, and Fender.

What's the difference between acoustic and electric guitars?

An ordinary (acoustic) guitar makes sound entirely by vibration. When you pluck a string, it vibrates back and forth, transmitting sound energy into the hollow wooden body of the guitar, making it (and the air inside) resonate (vibrate in sympathy) and amplifying the sound (making it considerably louder).

If you've ever seen an electric guitar, you'll have noticed that most of them have solid bodies that are thinner (and sometimes much smaller) than those of acoustic guitars. Although most electric guitars are wooden, the material from which they're made is not critical. As George Beauchamp (pioneer of the modern electric guitar) pointed out in his patent back in the 1930s: "The body may be varied considerably in size, shape and construction, and may be constructed of various materials without departing from the spirit of the invention"; his original design suggested the body could be made from "a simple integral casting of metal such as aluminum." Early electric guitars were made from all kinds of materials, including molded Bakelite (one of the first plastics) and sheets of soldered brass. Airline® guitars, which first became popular in the 1960s, were made of fiberglass.

Why does the material matter less than with an acoustic guitar? Because the body of an electric guitar is much less important in producing and amplifying the sound; all it really has to do is hold the strings so they're long and tight enough to make the kind of sound frequencies we want to hear. Although resonance still plays an important part in giving an electric guitar its tone, solid-body electric guitars generate most of their sound through an entirely different process from acoustic guitars. In fact, even though acoustic and electric guitars look similar, and you play them in a broadly similar way, they are quite different instruments. 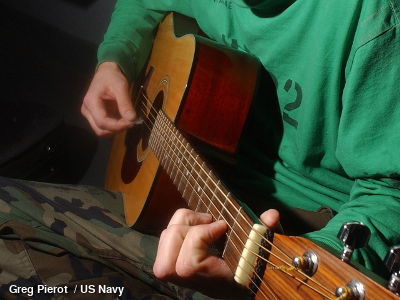 Photo: Pick up an acoustic guitar and what you have in your hands is mostly empty space! Inside, the large wooden body (which is called the sound box) is filled with nothing more than air. As you pluck the strings, the wooden body of the guitar vibrates, the air inside the body vibrates too, and it's the vibrations of the wooden body and the air that amplify the string sound so you can hear it. Acoustic guitars have those big holes in the middle of the case, under the strings, so the amplified sound can get out and travel to your ears. In other words, the hole works the same way as the hole in the end of a trumpet, flute, or any other instrument. Photo by Greg Pierot courtesy of US Navy and Wikimedia Commons. 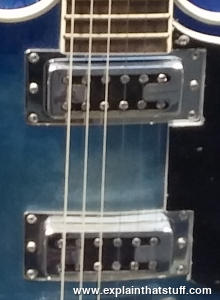 Photo: Electromagnetism at work: a closeup view of the pickups under the strings of an electric guitar.

Electric guitars are powered by electromagnetism—and electromagnetic induction to be precise. That might not sound familiar, but you've probably used it if you've ever ridden a bicycle at night with a dynamo-powered light. A dynamo is a simple electricity generator with two basic parts: a rotating coil of wire that spins around inside a hollow, curved magnet. As the coil spins, it cuts through the magnet's field. This makes electricity flow through the coil. Two electrical connections from the coil are wired up to a lamp and the electricity generated makes the lamp light up.

To cut to the chase, we can say that a changing magnetic field generates or "induces" electricity. It's also true that a changing electric field generates magnetism. If you feed electricity through a coil of wire, you generate a magnetic field around it. That's how you can make a magnet controlled by electricity—better known as an electromagnet. Electricity and magnetism are really two different aspects of a single phenomenon: electromagnetism.

What does all this have to do with guitars? Crudely speaking, the metal strings of an electric guitar are a bit like dynamos: they make electricity when you move them. Under the strings, there are electricity-generating devices called pickups. Each one consists of one or more magnets with hundreds or thousands of coils of very thin wire wrapped around them. The magnets generate a magnetic field all around them that passes up through the strings. As a result, the metal strings become partially magnetized and, when they vibrate, make a very small electric current flow through the wire pickup coils. The pickups are hooked up to an electrical circuit and amplifier, which boosts the small electric current and sends it on to a loudspeaker, making the familiar electric guitar sound. Usually, the amplifier and loudspeaker are built into a single unit called an "amp."

How does an electric guitar turn movement (in a string) into that amazing twangy sound you can hear? Like this! 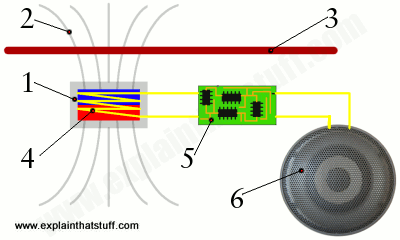 Electric guitars that are use pickups in this way were invented in the early 1930s by George Beauchamp—the guy we mentioned up above. Browsing these drawings from his original 1934 patent, we can see just how big a debt modern electric guitars still owe to his pioneering design: 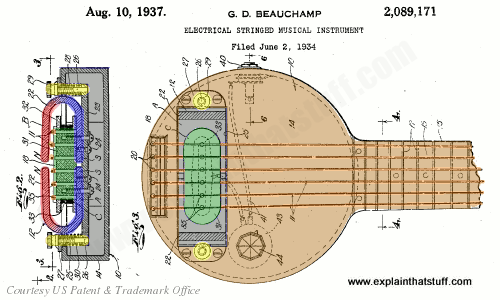 Artwork: George Beauchamp's original "frying-pan" electric guitar design from 1934. On the right, you can see a top view of the guitar with the pickup unit shown in dark blue and the pickup coil (green) sitting underneath the six strings (shown in orange). On the left, there's an end-on, cross-section of the pickup unit (looking down from the head of the guitar toward the bridge). You can see that Beauchamp has used a pair of horseshoe magnets, with their north poles (red) and south poles (blue) aligned and the strings threading between them. The pickup sits between the magnets under the strings. From US Patent 2,089,171: Electrical Stringed Musical Instrument by George Beauchamp (filed June 2, 1934, issued August 10, 1937). Artwork courtesy of US Patent and Trademark Office.

Now you might not have heard of Beauchamp or the company he founded to capitalize on his neat idea, which was initially called Ro-Pat-In Corporation, then Electro String. Eventually, the company took the name of its president and cofounder, George's friend Adolph Rickenbacker—and the rest, as they say, is history. Many others have built on Beauchamp's work since then, constantly trying to refine and improve the sound.

Beauchamp was first off the blocks, but—of course—he wasn't the only great guitar pioneer. A few years later, Guy Hart of Gibson came up with a much-improved "Electrical musical instrument" that is "handsome in appearance and capable of producing tones of great beauty in a great number of degrees of amplification," described in US Patent 2,087,106, As he made clear, the body of the guitar is "substantially non-resonant": "It is an object of this invention to produce a device which does not rely on the resonance of the instrument itself, the entire audible effect being due to the electrical amplifying means connected thereto." In other words, as far as Hart was concerned, the electrical and magnetic bits do most of the work. (This isn't entirely true of modern electric guitars: there is some resonance even in solid-bodied guitars.) 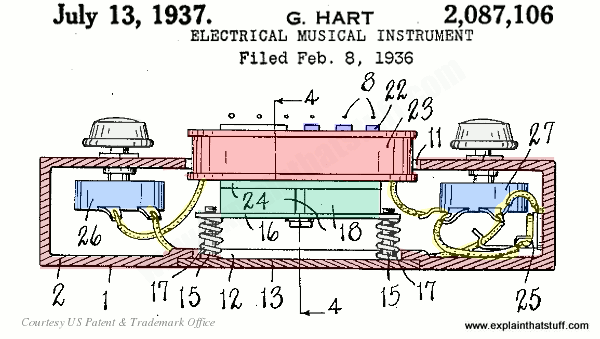 Artwork: Guy Hart's Gibson patent, filed in February 1936, has much more modern-looking pickups. Again, we're seeing a cross-section here. The strings are at the top (blue), with the pickup coil (red) underneath them, and a couple of bar magnets (green) underneath that. To the left and right, we have volume and tone controls to give all those "degrees of amplification" he was talking about. From US Patent 2,087,106: Electrical Musical Instrument by Guy Hart (filed February 8, 1936, issued July 13, 1937). Artwork courtesy of US Patent and Trademark Office.

Here's an improved pickup design by another guitar great, (Clarence) Leo Fender, from about a decade later:

Artwork: Improved Fender pickups from 1944. 1) A general view of a guitar with the pickup shown in blue and the strings colored orange. 2) An end-on view (looking down from the head toward the bridge) shows one version with a single pickup coil (green) spanning all six strings. 3) Looking from the side, you can see how the strings thread through the pickup coil. 4) In an alternative design, there are six separate pickup coils, one for each string. From US Patent 2,455,575: Pickup Design for Instruments by Clarence Leo Fender and Clayton Orr Kauffman (filed September 26, 1944, issued December 7, 1948). Artwork courtesy of US Patent and Trademark Office.

It's a basic rule of physics (called Faraday's law) that a changing magnetic field produces electricity. So a guitar string will produce electricity only for as long as the magnetic field is changing—in other words, for only as long as the metal string is moving. Once the string stops vibrating, the sound stops. In that respect, an electric guitar is just like an acoustic one.

Unfortunately, a simple pickup with a single coil of wire is just as good at picking up stray electrical energy from power supplies and other interference, so it generates a certain amount of unwanted, background noise. Some guitars solve this problem using what are known as humbucking pickups. These have two coils of wire, arranged so they capture double the signal from the moving guitar strings to produce a richer sound. Each coil is wired up so any stray "hum" it captures from nearby electrical equipment is canceled out by the other coil. Most guitars have two or more pickups, which create a variety of different effects. Typically, there's one pickup under the bridge of the guitar (where the strings are supported) and another one slightly higher up at the bottom of the "neck" (the part of the guitar that sticks out of the main body).

Photo: A stunningly beautiful Gibson guitar. You can probably just about make out the two pickups in this photo: one's directly under the guitarist's fingers, where he's strumming away, and the other's nearer to the bridge (under his wrist). Photo by Ted Banks courtesy of US Navy and Wikimedia Commons.

The way a pickup is constructed can make a dramatic difference to the sound the guitar produces. Magnets made from different materials, pickups with more coils of wire, different shapes of pickups, and different thicknesses of wire used in the coil—these are just some of the factors that will alter the sound.

The pickup coils are wired to the amplifier through an electrical circuit. The circuit usually also contains volume and tone controls, which allow the basic sound to be adjusted by turning knobs on the guitar body. A guitar with two pickups will have four knobs on its body: one to adjust the volume and the tone of the sound from each pickup. More complex circuits can be added to change the sound of an electric guitar in all kinds of interesting ways.

What are the main parts of an electric guitar? 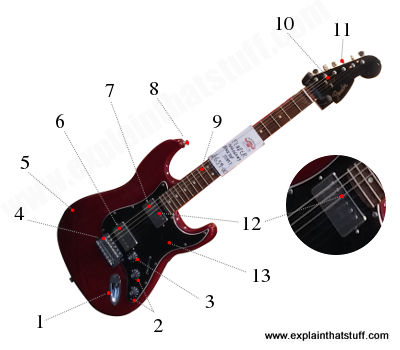 Photo: The main parts of a Fender Stratocaster electric guitar.