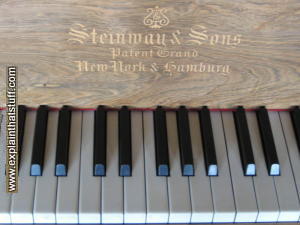 Who are the world's best musicians? Everyone has their own personal view on this, but for my money concert pianists win hands down. If you've ever seen a world-class pianist playing a great piece of music, like a Beethoven sonata, you'll understand exactly what I'm talking about. It takes amazing physical, intellectual, and emotional brilliance to play such a complex instrument in such a captivating way—and only a tiny proportion of the world's pianists are up to the job. But it's not just the musician who makes the music sound so fantastic: the instrument plays a huge part too. Let's take a closer look inside a piano and find out how it works!

Photos (above and below): On a high note: Steinway is generally considered to be the Rolls Royce of grand pianos. This is a superb Steinway grand dating from 1876 in the gallery at Lanhydrock, Cornwall. 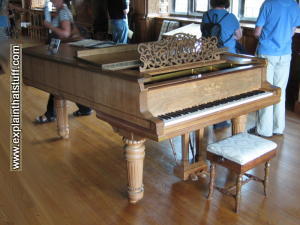 A piano sounds quite unlike any other instrument and, if you heard it on the radio, you'd probably never guess how it was making a noise. The confusing thing about a piano is that it's two different kinds of instrument in one: it's a string instrument, because the sounds are made with strings, but it's also a percussion instrument (like a drum) because the strings make sounds when something hits them. Listen to the music of a composer like Bartok and you'll often hear the piano being played percussively—almost beating like a drum!

So what happens when you press the key of a piano? The key is actually a wooden lever, a bit like a seesaw but much longer at one end than at the other. When you press down on a key, the opposite end of the lever (hidden inside the case) jumps up in the air, forcing a small felt-covered hammer to press against the piano strings, making a musical note. At the same time, at the extreme end of the lever behind the hammer, another mechanical part called a damper is also forced up into the air. When you release the key, the hammer and the damper fall back down again. The damper sits on top of the string, stops it vibrating, and brings the note rapidly to an end.

Artwork: How a piano works: Press down on a key and you make a small hammer shoot up and strike the corresponding strings from beneath. Release the key and the damper at the back falls down onto the strings, stopping the note.

How does a piano action work? 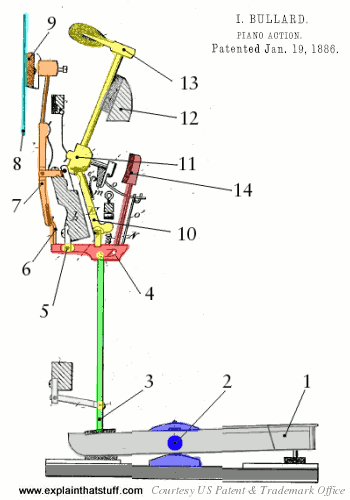 Artwork: A typical upright piano action, from US Patent 334,511: Piano by Isaac Bullard. Artwork courtesy of US Patent and Trademark Office.

The little diagram up above is a hugely simplified version of what happens in a real piano. A piano's keys control the hammer and the damper through an intricate mechanism, which is known as the piano's action. Here's a typical action for an upright piano, devised by inventor Isaac Bullard of Hyde Park, Massachusetts in the late 19th century. It's an example of what's called a French-repeating action, because it allows notes to be played rapidly in quick succession.

Even this diagram is a simplification—I've left out quite a few pieces for clarity!

If a piano consisted of nothing but an action—the mechanical connection between keys and strings—no-one in the audience would hear very much. So there are lots of other parts in a piano designed to make notes sound louder or last longer. The strings of a piano stretch out horizontally away from the pianist sitting at the keyboard, just as though a piano were a guitar laid flat on its back.

Photo: (Below) Looking from the back of a piano, under the lid and into the case, you can see the strings stretched taut across the sturdy cast-iron frame. The long bass strings are on the right in this picture and the shorter treble strings are on the left. The open lid reflects the music into the audience like a giant, wooden sound "mirror". Picture adapted from an original photograph by Marie Cassetty courtesy of Defense Imagery. When you pluck a string, it vibrates, sets air molecules in motion and sends the sounds of the strings out toward your ears. To make the sounds louder, there is a large piece of wood mounted underneath them, called the soundboard (or sounding board). When the strings vibrate, the soundboard also vibrates in sympathy (resonance), just as a wine glass vibrates when a soprano sings a high note nearby. The soundboard effectively amplifies the strings so they are loud enough to hear. The lid helps the audience too: sound from the strings and the soundboard travels straight up, hits the lid, and reflects out toward the audience. That's why it's always better to sit on the right of the pianist and why concert hall seats to the left of (and behind) the pianist are generally much cheaper. 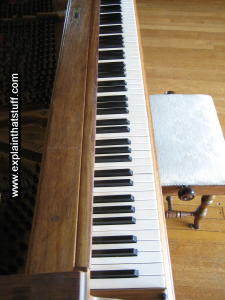 Photo: Another view of the Lanhydrock Steinway Grand. 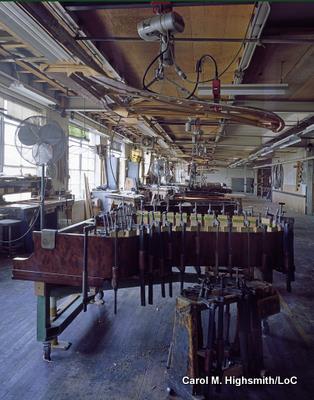 Photo: A grand piano being assembled at the historic Steinway factory in Queens, New York. Note the sturdy cast-iron plate hovering up above, ready to be lowered into position. Its job is to stop the piano "imploding" from the tension of the strings. Credit: Photographs in the Carol M. Highsmith Archive, Library of Congress, Prints and Photographs Division.

How do the pedals change the sound?

While the 88 keys on a piano control the musical notes that the pianist can make, the three pedals determine how loud or soft these notes are and how long they last. The pedal on the left is called the soft pedal. Most of the keys on the keyboard hit two or three strings simultaneously when you press them, so you get a richer and louder note. However, if you press the soft pedal down, the hammers that play the notes shift slightly to one side so they contact fewer strings—making a quieter note. The middle pedal is called the sostenuto pedal: when you press it down, it temporarily deactivates the dampers for the notes that you're playing at the time, and makes them last quite a bit longer. The pedal on the right is called the sustaining pedal. Pressing it down raises all the dampers up in the air so all the notes last longer.

“The piano ain't got no wrong notes.” 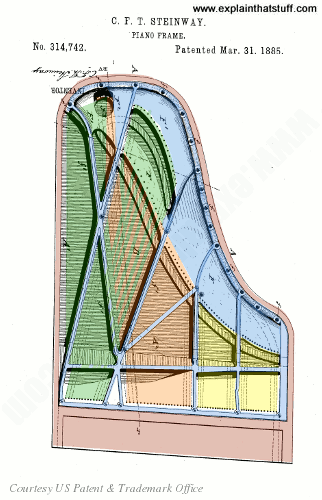 Artwork: How the strings are supported inside a piano frame—as shown in a typical Steinway design from the 19th century. The keyboard is at the bottom, so the long bass strings (green) are on the left, the mid-pitch strings are in the middle (orange), and the high treble strings are on the right (yellow). Note how the deepest and longest base strings have to cross over and above the treble strings. The incredible tension of so many taut strings is balanced by the strong metal "skeleton" framework (blue) inside the wooden case (brown). Design for a piano frame by Theodor Steinway from US Patent 314,742: Piano Frame, March 31, 1885, courtesy of US Patent and Trademark Office.

If you've ever wondered why pianos are such a funny shape, that's easy to answer too. Remember that they're string instruments. Lower notes need longer strings than higher notes, so the bass strings for the low notes on the left-hand side of the keyboard need to be much longer than the treble strings for the high notes on the right-hand side. That's why the case is longer on the left than on the right and why it has that funny curved rim. In fact, the strings on the left are so long that they cross over, on top of the middle and treble strings to save space. (You can see that very clearly on the artwork here and also in the photo up above.)

Since each note can have up to three strings, it turns out that there are well over 200 strings inside a piano—each one stretched really tight. To stop the strings from collapsing the entire piano inwards, the rim and case are reinforced by a huge, heavy cast-iron plate. The plate sits just above the sound board and large metal holes around its edge (known as rosettes or portholes) allow the sound to come up through it.

In an upright piano, things are slightly different. The strings run vertically at the back of the case and the hammers strike them by moving horizontally. It's like a grand piano standing on its end—literally upright. 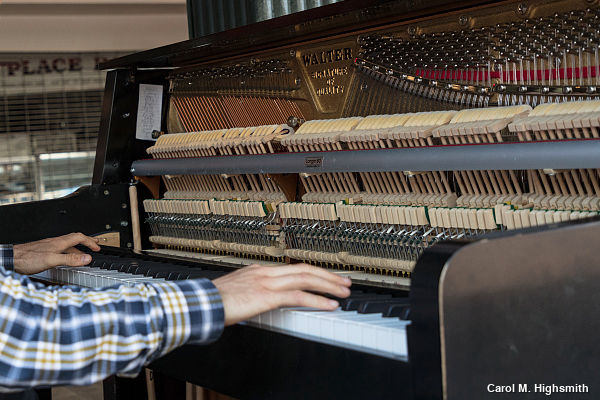 Photo: As its name suggests, the mechanism of an upright piano is upright: the strings are arranged vertically instead of horizontally (as in a grand piano). Credit: Photographs in the Carol M. Highsmith Archive, Library of Congress, Prints and Photographs Division.

That's a very quick tour of a piano, one of the world's most amazing instruments! 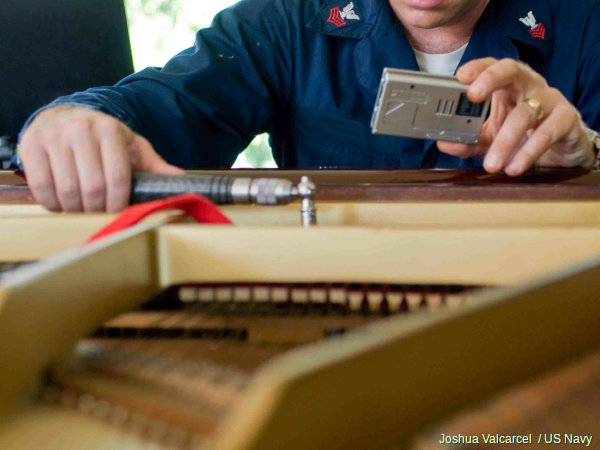 Photo: Tuning a piano is a skilled job that involves tightening the strings by precise amounts using a tuning hammer (really a wrench) like this. Here the tuner is using a handheld, electronic tuner to check the pitch of the strings as he adjusts them. Picture by Joshua Valcarcel courtesy of US Navy.

There are zillions of books on learning to play piano. Any decent book should really convince you to take proper piano lessons with a good teacher, if you're serious about playing properly.

Patents are always worth exploring if you like real technical detail. Here are a few (of the many hundreds) of piano patents filed by Steinway that you can find at the US Patent and Trademark Office and European Patent Offfice.