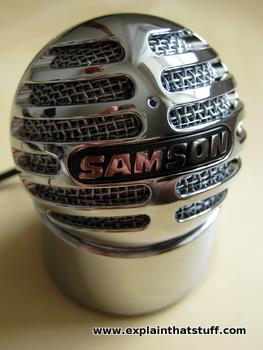 Sound—energy we can hear—travels only so far before it soaks away into the world around us. Until electrical microphones were invented in the late 19th century, there was no satisfactory way to send sounds to other places. You could shout, but that carried your words only a little further. You couldn't shout in New York City and make yourself heard in London. And you couldn't speak in 1715 and have someone listen to what you said a hundred years later! Remarkably, such things are possible today: by converting sound energy into electricity and information we can store, microphones make it possible to send the sounds of our voices, our music, and the noises in our world to other places and other times. How do microphones work? Let's take a closer look! 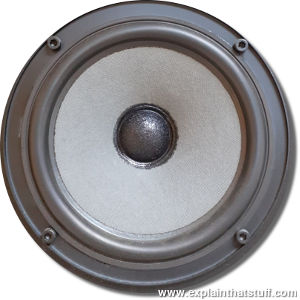 Photo: Above: This Samson Meteorite is a typical studio-grade professional microphone that hooks up to your computer for podcasting or other high-quality audio recording. Technically, it's a condenser microphone and picks up sound in a cardioid polar pattern. The protective metal grille is meant to reduce wind and pop sounds. Microphones like this turn incoming sound into outgoing electricity. Below: Loudspeakers, like this, work the opposite way to microphones, converting incoming electrical energy into outgoing sound.

Microphones are loudspeakers in reverse

Microphones look very different from loudspeakers so most people never realize how similar they are. If you've read our article on loudspeakers, you'll already know how microphones work—because they're literally loudspeakers working in reverse!

In a loudspeaker, electricity flows into a coil of metal wire wrapped around (or in front of) a permanent magnet. The changing pattern of electricity in the coil creates a magnetic field all around it that pushes against the field the permanent magnet creates. This makes the coil move. The coil is attached to a big flat disc called a diaphragm or cone so, as the coil moves, the diaphragm moves too. The moving diaphragm pushes air back and forth into the room and creates sound waves we can hear.

In a microphone, there are almost identical parts but they work in exactly the reverse way.

How does a microphone turn sound energy into electrical energy? Like this:

Photo: A typical BBC-Marconi ribbon microphone used for radio broadcasts from about the mid-1930s. (I photographed this in the Think Tank science museum in Birmingham, England.) 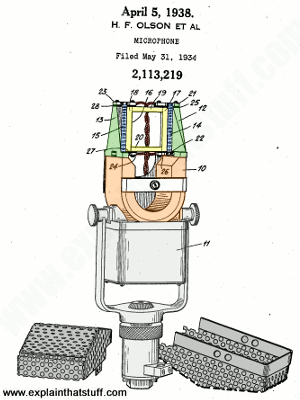 Artwork: How a ribbon microphone works. A pair of crimped ribbons of aluminum foil (blue) are stretched between the pole pieces (green) above a permanent magnet (orange) and move back and forth as sound waves hit them, causing an electric current to flow in the cables (brown) attached to their ends. The yoke (yellow) closes and concentrates the magnetic field. Artwork from US Patent 2,113,219: Microphone by Harry F. Olson and Frank Massa, RCA, April 5, 1938, courtesy of US Patent and Trademark Office (with colors added for clarity).

All microphones turn sound energy into electrical energy, but there are various different kinds that work in slightly different ways.

Dynamic microphones are just ordinary microphones that use diaphragms, magnets, and coils. Condenser microphones work a slightly different way by using a diaphragm to move the metal plates of a capacitor (an electric-charge storing device) and generate a current that way. Most microphones are omnidirectional, which means they pick up sound equally well from any direction. If you're recording something like a TV news reporter in a noisy environment, or a rare bird tweeting in a distant hedgerow, you're better off using a unidirectional microphone that picks up sound from one specific direction. Microphones described as cardioid and hypercardioid pick up sounds in a kind of "heart-shaped" (that's what cardioid means) pattern, gathering more sound from one direction than another. As their name suggests, you can target shotgun microphones so they pick up sounds from a very specific location because they are highly directional. Wireless microphones use radio transmitters to send their signals to and from an amplifier or other audio equipment (that's why they're often called "radio mics").

How do intercoms work?

Intercoms are used as baby monitors and in those desktop gadgets that allow bosses to speak to their secretaries (or vice versa). The most basic kind of intercom has two handsets in different rooms connected together by a length of copper cable stretching between them. Each handset contains a loudspeaker—and a couple of push buttons. The loudspeaker functions as either a microphone (absorbing sound) or a loudspeaker (giving out sound) depending on which person wants to talk. 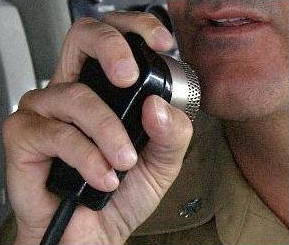 Photo: In a basic intercom, like this military one, the same device works as both the loudspeaker and the microphone. There's a PTT ("push to talk") button on the side that you press when you want to speak that turns the device into a microphone. If the button isn't pressed, it works as a loudspeaker. The sound quality isn't too good, though, and that's one of the big drawbacks of simple intercoms: one device can't do a great job as both a microphone and a loudspeaker—there's some compromise involved. Photo by Brien Aho courtesy of US Navy.

Let's suppose Annie (the boss) and Bob (her secretary) are in neighboring rooms. Bob wants to alert Annie that it's time for a meeting so he presses the intercom call button. Annie's intercom beeps so she presses her "talk" button. The loudspeaker on her handset now functions like a microphone. She talks into it and the sound energy produced by her voice is converted into a fluctuating electric current that travels down the wire to Bob's intercom. When the current flows into Bob's loudspeaker, it gets converted back into sound waves and Bob hears Annie's voice. When Annie's done with talking, it's Bob's turn. He presses his "talk" button and now the intercoms reverse their functions. Bob's loudspeaker now works like a microphone, capturing his voice and turning it into an electric current that flows back down the cable to Annie's office. Annie's handset is now functioning as a loudspeaker and reproduces the sound of Bob's voice. 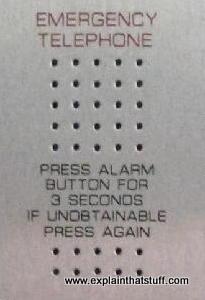 Photo: Emergency telephones on trains, in elevators, and in public places are usually simple intercoms. There's a single loudspeaker/microphone with a button to press to attract someone's attention. When the button is pressed, the intercom functions as a microphone and transmits your voice. When you release the button, the intercom switches to a loudspeaker so you can hear what the person at the other end has to say in response. An intercom like this is much harder to break or vandalize than an ordinary telephone handset, so it's particularly suitable for use in public places. 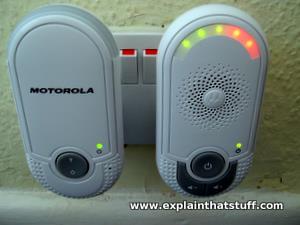 From a scientific viewpoint, these simple intercoms are the most interesting: they teach us that loudspeakers and microphones are opposites. From a user's viewpoint, there are other kinds of intercoms you might prefer to use. Some have both microphones and loudspeakers in each handset so two people can talk simultaneously. Wireless intercoms are more like walkie-talkies (short-range radio sets) and have no awkward cables to tangle up or get in the way. Still others plug into household electricity outlets and send their voice signals round the household wiring instead of using a wire cable of their own. (That means they operate a little bit like broadband over powerlines or BPL.)

Photo: A wireless baby monitor intercom. There are two separate units that communicate via your home powerlines and normally you'd use them in different rooms, but I've put them alongside just to take the photo. The "baby" unit on the left contains the microphone (and a nightlight). The "parent" unit on the right contains the loudspeaker and also lights up when sounds are heard. Because sounds are transmitted directly from one unit to the other, there's no need for any cumbersome wiring between the two.

Make your own microphone! 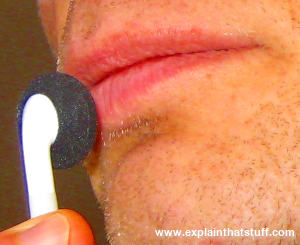 Photo: Using an ordinary earbud as a microphone.

Don't have a microphone? What we've just learned about intercoms suggests you can make your own very simply—just by plugging a pair of earbud headphones into your microphone socket and talking into them! This neat little trick should work with audio equipment, but it won't necessarily work on your computer. That's because your earbuds are wired into a stereo jack plug, while your microphone socket will be wired for mono input (and your computer's internal sound card will most likely be mono too). But give it a go and see. You may need to adjust your sound card properties in your control panel or sound settings. If you're lucky, you'll find one of the earbuds works as your microphone while the other doesn't do anything (because of the mismatch between the stereo plug and the mono socket). I plugged my earbuds straight into my computer's mic socket and got a perfectly reasonable audio input into Skype running on Windows, but I couldn't get sound playing through Windows Sound Recorder. If you want to record stereo sound on your computer with a microphone, your best bet is to use an external sound card (such as a Griffin iMic).

These great websites go into more detail about making your own mic:

Please note that these are highly technical guides, not well suited to beginners.