You are here: Home page > Tools, instruments, and measurement > Welding and soldering
Advertisement 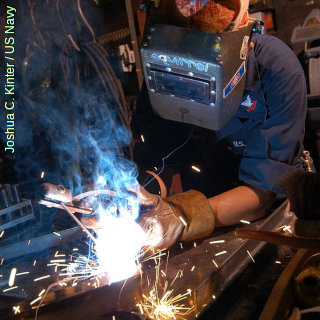 If you're building almost anything that uses metal, from a nuclear submarine to a laptop computer, one thing you'll need to be able to do is join metals together. Welding is a way of tightly bonding two metals by melting them where they meet, while soldering involves making a joint between components in an electric or electronic circuit. Both are highly effective, though they're very different and work in completely different ways—don't mix them up!

You can't really join metals with adhesive—not with ordinary glue, anyway. But you can join them by melting them together in a process known as welding. The basic idea is simple: you apply a source of heat to melt the two metals so they fuse and form a secure joint. Usually (though not always) you add other materials as you apply the heat: a filler (an extra piece of metal, supplied from something called a welding rod, which seals up any gaps where the main metals meet) and a flux (a nonmetallic chemical that helps to stop the molten metals forming oxides and nitrides with gases in the air, which weakens the joint). As an alternative to using a flux, you can weld in an atmosphere from which the air has been removed (filled with other, nonreactive gases such as argon, for example). 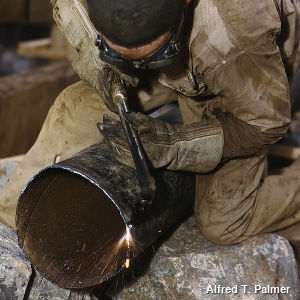 Photo: A welder works on a pipe during construction of the Douglas Dam in Tennessee, which was built in record time in 1942. Credit: Alfred T. Palmer, Office of War Administration, Library of Congress, Prints and Photographs Division.

Most forms of welding involve joining metals with heat alone. But they differ in where the heat comes from. One common form of welding involves using an oxyacetylene gas torch, which makes an intense flame by burning acetylene (an energy-rich fuel made from a simple hydrocarbon molecule) in a rich supply of oxygen. Although convenient and portable, oxyacetylene torches are relatively expensive to use (because the fuel is supplied in gas cylinders). 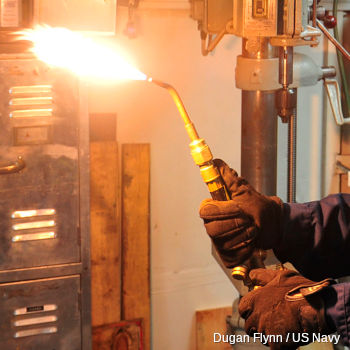 Photo: A welder lights up an acetylene torch. Photo by Dugan Flynn courtesy of US Navy and Wikimedia Commons.

In factories, it's usually more convenient to weld with electrical power using a technique known as arc welding. Instead of a gas torch, you use a piece of metal called an electrode connected to a high-current power supply (hundreds of times higher than the ones that flow through appliances in your home). As you bring the electrode up to the joint you're welding, it creates a spark or arc that melts the metals together. Arc welding produces both bright visible sparks and discharges of ultraviolet light, both of which can lead to blindness; that's why you'll always see people arc welding behind wraparound protective visors. Other heat sources for precision welding include ultrasonics, lasers, and electron beams.

You can also weld materials by forcing them together through sheer pressure, with or without extra heat. This is known as pressure welding; used for many hundreds of years by blacksmiths and other artisans, it's one of the oldest metalworking techniques. The basic process involves heating metals in a forge and then hammering them together so they fuse.

One way to make arc welding safer is to get an industrial robot to do it for you. Car bodies have been welded by robots for decades. The first welding robot, the Unimate, made its debut in a General Motors plant in 1961. 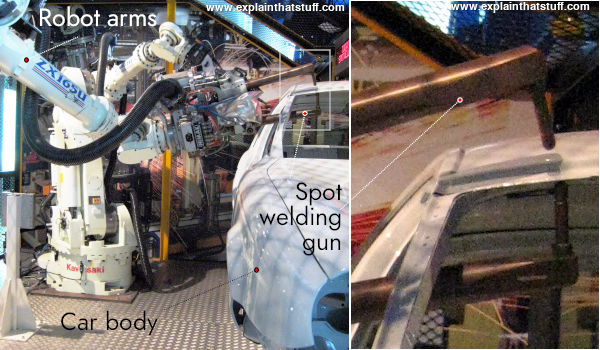 Photo: Left: A typical car-welding robot. The robot (made by Kawasaki) has an electrical welding gun (made by Nimak) attached to the end of it and it's about to complete a weld on the white car body on the right. This is called spot welding: the robot arm moves the gun to the precise spot on the car that needs welding and a large but brief electric current leaps between the electrodes to complete the weld. Right: A closeup of the welding gun showing the two electrodes, which are usually made from a copper alloy. 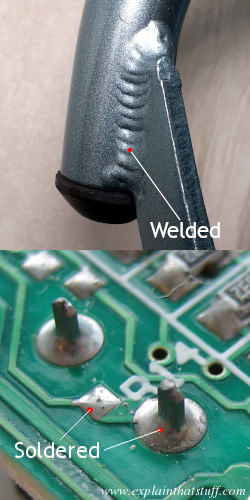 Photo: Although welding and soldering can look similar, they do completely different things. Top: This welded joint mechanically fixes two pieces of metal together on a wheelchair footplate. Bottom: These soldered joints on the back of a printed circuit board make a reliable electrical connection between the components and the tracks on the board that join them together.

Soldering looks similar to welding—but it's quite different! In welding, you're trying to make a super-strong joint between two pieces of metal. Often a welded joint has to stand up to incredible stresses and strains—for example, if you weld parts of a car body or an airplane fuselage together. So the objective is to make a good mechanical connection. When you solder, the idea is usually to to make a good electrical connection.

Solder looks a bit like an unwrapped paperclip, though it's much softer, and it generally comes in tubes and reels. It's an alloy of different metals that has a relatively low melting point. The solder I use, which is typical, is made of 99.25 percent tin and 0.75 percent copper, though other metals such as zinc, silver, and bismuth are also used. (Lead was once widely used in solders with tin, but has now been largely phased out for safety reasons). Solders sometimes also contain fluxes to prevent the formation of oxides.

Why do you need to solder? Electronic circuits are made of discrete components: tiny devices such as resistors, capacitors, transistors, and LEDs that do specific jobs. When you put them together in different ways, you can build all kinds of amazing electronic gadgets, from radios and televisions to calculators and computers. The components all have little metal legs—terminals that you use to connect them into the circuits. You could just wire these legs together with electrical cables, but the wires might drop off or wriggle free and the connections wouldn't be reliable, so anything you built this way wouldn't work very well. And that's where solder comes in: it makes a much more effective electrical connection. 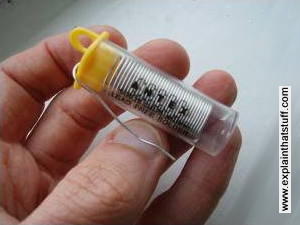 Photo: Solder looks and feels like a length of paperclip that's been unwrapped and then coiled up in a plastic dispenser tube like this one. You pull out a short length as you need it. This is lead-free solder made mostly from tin and copper. 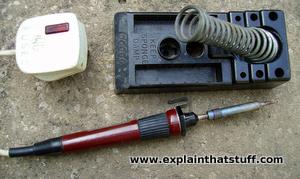 Photo: A typical soldering iron—the one I've owned since I was about 14. A soldering iron is essentially just a heating element powered by electricity that has a robust outer case (the bit) designed to withstand endless heating and cooling. Bits are designed to be interchangeable and come with wider or narrower ends for work of different precision. The other essential component (top right) is a stand where you can safely rest your iron though, if you look closely, you'll notice that this iron has a curved clip on it (just above the black rubber finger grip) for resting or propping it up. Since I'm using a UK electrical supply, I've fitted a red indicator light to the plug (top left) to help me remember when the iron is switched on, for added safety.

How does it work in practice? You melt the solder over a joint by applying a hot tool called a soldering iron (essentially a hot piece of metal with a pointed tip, with the heat generated inside it by an electrically powered heating element). It's very important to note that solder is not glue: it is not designed to make a mechanical connection. If you rely on solder alone to fasten two wires together, they'll probably break apart sooner or later. It's important to make a good mechanical connection and then solder on top. There are good and bad ways to solder, some of which make poor joints that don't conduct electricity properly. (For example, if you move a soldered connection while the solder is still molten, you will generally get a badly formed or cold joint, which will be dull-colored, irregular, and pitted.) If you plan on doing your own electronic projects, the first thing to do is learn how to solder properly. You'll find a couple of handy demonstration videos in the "Find out more" section at the end of this article. 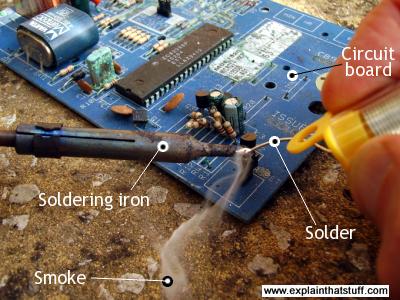 Photo: Here's my soldering iron in action. You solder by holding your hot soldering iron to the joint in your circuit where you want to make an electrical connection. Then, with your other hand, you apply the solder until it melts in a blob on top of the joint, usually with a puff of "smoke" (actually the metals in the solder turning into gas form).

Other uses of soldering

What I've said above applies essentially to electrical and electronic work, but there are other kinds of soldering too. Plumbers use solder to join copper pipes together in a permanent (but still reversible) way that creates a mechanically robust and waterproof joint. The process is broadly similar to electrical soldering, although the type of solder is chemically different and generally you'll work with a handheld gas torch. Still in plumbing, and closely related to soldering is a process called sweating, in which you allow solder to melt onto, and suck into, a heated pipe joint.

Soldering is also used in the jewelry business to join fine pieces of metal together (to create brand new decorative pieces or repair old, broken ones). Again, the concept is broadly similar to electrical soldering—you're using a molten alloy to join two pieces of metal securely together—but the process is different: you use a gas torch and much higher temperatures than you'd use for electrical soldering or plumbing. High-temperature soldering like this is sometimes called hard soldering or silver soldering to differentiate it from lower-temperature soft soldering (for electrical and plumbing work); confusingly, within silver soldering, you'll find different solders described as hard, medium, easy, and extra-easy (reflecting how easy it is to melt them rather than how simple they are to work with—so "extra-easy" melts at the lowest temperature).

For comparison, here are some typical solders and rough melting temperatures for electrical, plumbing, and jewelry work:

Brazing is a similar process to soldering except that the filler you use (an alloy, equivalent to solder) works much more like an adhesive. When you solder, you're simply melting a low-temperature alloy on top of the terminals you're joining together to make a reliable electrical bridge between them. The terminals themselves don't actually melt (unlike in welding) and aren't usually changed in any way: the filler just sits on top. But when you braze, you work at a much higher temperature (maybe 450°C or 840°F). The filler melts and seeps right into the surface of the metals you're joining, so it binds them together securely. Brazing is thus a bit like a cross between welding and soldering and it's mainly concerned with making a secure mechanical joint. Brazing can be used to join many different metals and alloys, and it's widely used by plumbers and gas engineers to make smooth, neat, robust, leak-proof joints in water and gas pipes. 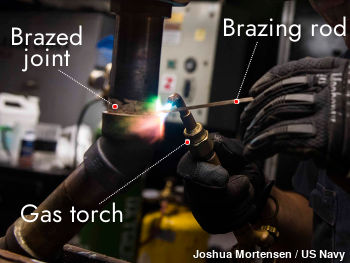 Photo: Brazing a metal joint. A gas torch is used to heat the two metal pieces that are being joined. Once they're hot enough, a brazing rod (the filler, equivalent to solder) is moved along so it melts on the hot metal and "feeds" into the joint. Photo by Joshua Mortensen courtesy of US Navy.