You are here: Home page > Electricity and electronics > Diodes and LEDs
Advertisement 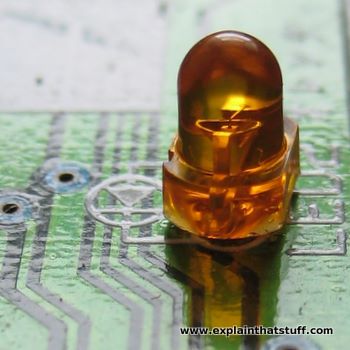 Move over bulbs: there are better ways to make light now! There are those compact fluorescent lamps, for example—the ones that save you energy and money. But, even better, there are LEDs (light-emitting diodes) that are just as bright as bulbs, last virtually forever, and use hardly any energy at all. An LED is a special type of diode (a type of electronic component that allows electricity to flow through in only one direction). Diodes have been around for many decades, but LEDs are a more recent development. Let's take a closer look at how they work!

Photo: Unlike incandescent lamp bulbs (used in things like flashlights), which burn out relatively quickly, LEDs are extremely reliable—so much so, that they're typically soldered right onto electronic circuit boards. They virtually never wear out! This is the tiny LED indicator lamp from a computer printer's control panel.

The difference between conductors and insulators

What's the difference between a conductor and an insulator? Solids are joined together when their atoms link up. In something like a plastic, the electrons in atoms are fully occupied binding atoms into molecules and holding the molecules together. They're not free to move about and conduct electricity. But in a conductor the atoms are bound together in a different kind of structure. In metals, for example, atoms form a crystalline structure (a bit like equal-sized marbles packed inside a box) and some of their electrons remain free to move throughout the whole material, carrying electricity as they go. 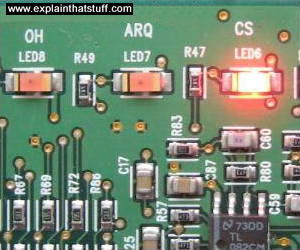 Photo: LEDs are much smaller than lamp bulbs and use a fraction as much energy. They are particularly suitable for use in instrument panels, which have to be lit up for hours at a time. Put many diodes together and you can make as much light as a conventional bulb and still save energy.

Not everything falls so neatly into the two categories of conductor or insulator. Put a big enough voltage across any material and it will become a conductor, whether it's normally an insulator or not. That's how lightning works. When a cloud moves through the air picking up electric charge, it creates a massive voltage between itself and the ground. Eventually, the voltage is so big that the air between the cloud and the ground (which is normally an insulator) suddenly "breaks down" and becomes a conductor—and you get a massive zap of lightning as electricity flows through it.

Certain elements found in the middle of the periodic table (the orderly grouping of chemical elements) are normally insulators, but we can turn them into conductors with a chemical process called doping. We call these materials semiconductors and silicon and germanium are two of the best known examples. Silicon is normally an insulator, but if you add a few atoms of the element antimony, you effectively sprinkle in some extra electrons and give it the power to conduct electricity. Silicon altered in this way is called n-type (negative-type) because extra electrons (shown here as black blobs) can carry negative electric charge through it.

In the same way, if you add atoms of boron, you effectively take away electrons from the silicon and leave behind "holes" where electrons should be. This type of silicon is called p-type (positive type) because the holes (shown here as white blobs) can move around and carry positive electric charge.

How a junction diode works

Interesting things happen when you start putting p-type and n-type silicon together. Suppose you join a piece of n-type silicon (with slightly too many electrons) to a piece of p-type silicon (with slightly too few). What will happen? Some of the extra electrons in the n-type will nip across the join (which is called a junction) into the holes in the p-type so, either side of the junction, we'll get normal silicon forming again with neither too many nor too few electrons in it. Since ordinary silicon doesn't conduct electricity, nor does this junction. Effectively it becomes a barrier between the n-type and p-type silicon and we call it a depletion zone because it contains no free electrons or holes:

Suppose you connect a battery to this little p-type/n-type junction. What will happen? It depends which way the battery is connected. If you put it so that the battery's negative terminal joins the n-type silicon, and the battery's positive terminal joins the p-type silicon, the depletion zone shrinks drastically. Electrons and holes move across the junction in opposite directions and a current flows. This is called forward-bias:

However, if you reverse the current, all that happens is that the depletion zone gets wider. All the holes push up toward one end, all the electrons push up to the other end, and no current flows at all. This is called reverse-bias:

That's how an ordinary diode works and why it allows an electric current will flow through it only one way. Think of a diode as an electrical one-way street. (Transistors, incidentally, take the junction idea a step further by putting three different pieces of semiconducting material side by side instead of two.) 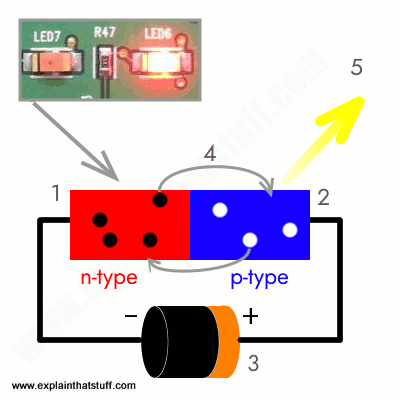 LEDs are simply diodes that are designed to give off light. When a diode is forward-biased so that electrons and holes are zipping back and forth across the junction, they're constantly combining and wiping one another out. Sooner or later, after an electron moves from the n-type into the p-type silicon, it will combine with a hole and disappear. That makes an atom complete and more stable and it gives off a little burst of energy (a kind of "sigh of relief") in the form of a tiny "packet" or photon of light.

This diagram summarizes what happens:

Photos (above and below): LEDs are transparent so light will pass through them. You can see the two electrical contacts at one end and the rounded lens at the other end. The lens helps the LED to produce a bright, focused beam of light—just like a miniature light bulb.

LEDs are specifically designed so they make light of a certain wavelength and they're built into rounded plastic bulbs to make this light brighter and more concentrated. Red LEDs produce light with a wavelength of about 630–660 nanometers—which happens to look red when we see it, while blue LEDs produce light with shorter wavelengths of about 430–500 nanometers, which we see as blue. You can also get LEDs that make invisible infrared light, which is useful in things like "magic eye" beams that trigger photoelectric cells in things like optical smoke detectors and intruder alarms. Semiconductor lasers work in a similar way to LEDs but make purer and more precise beams of light. 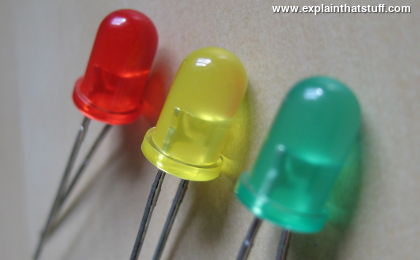 Photo: Colored LEDs produce different wavelengths of light. Red LEDs produce longer wavelengths of about 630–660 nanometers (nm), yellow come in at 555–600nm, and green are shorter again at about 515–555nm. Outside the visible spectrum, infrared LEDs make wavelengths greater than about 1000nm, while ultraviolet LEDs are often shorter than 400nm.

Whom should we thank for this fantastic little invention? Nick Holonyak: he came up with the idea of the light-emitting diode in 1962 while he was working for the General Electric Company. You might like to watch a short (4-minute) video about Nick Holonyak's life and work and his thoughts about the future of LEDs (courtesy of the Lemelson Foundation); if you're feeling more technically minded, you can read all about the solid-state physics behind LEDs in the patents listed in the references below.

What's so good about LEDs? 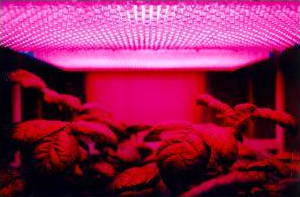 Photo: The red LEDs shining down from the top of this container are being used to test a way of growing potatoes in space. LEDs are more suitable than ordinary light because they don't produce heat (which would make the plants dry out). The red light these LEDs produce makes the plants photosynthesize (produce growth from light and water) more efficiently. Photo by courtesy of NASA Marshall Space Flight Center (NASA-MSFC).

What next for LEDs?

It's the best part of five decades since Nick Holonyak invented the LED, but the technology is still developing. In the 1970s, scientists discovered they could make LEDs from organic (carbon-based) materials, giving rise to OLEDs (organic LEDs) that are now becoming popular in thin, flat, and sometimes even flexible displays. Two decades later, three Japanese-born scientists (Isamu Akasaki, Hiroshi Amano, and Shuji Nakamura) invented blue-light-emitting diodes using the semiconductor gallium nitride, earning them the Nobel Prize in Physics in 2014. Red and green LEDs had been around for years—if you can remember early digital watches, you'll know their LED displays were always red—but blue light had always proved elusive. The conquest of the blue LED made it possible to produce perfect white light (either by combining red, green, and blue LEDs or by shining blue light through a white phosphor), so enabling energy-efficient LED lamps to compete effectively with older and less efficient technologies like incandescent bulbs and compact fluorescent lamps (CFLs). Gallium-nitride LEDs are also now finding their way into full-size color displays: they're very much brighter and considerably more efficient than rival LCD displays and OLEDs, though not so good at large screen sizes. 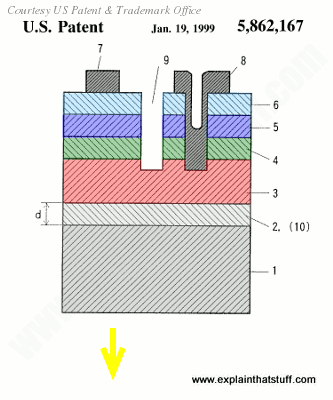 Another new development in this area is the microLED display, made from very bright, very efficient LEDs with much higher pixel density than the screens currently used in things like laptops and smartphones. Although microLEDs are still a very new technology, they're expected to find applications in things like heads-up displays for virtual reality and augmented reality and smartphone screens that use much less battery power.