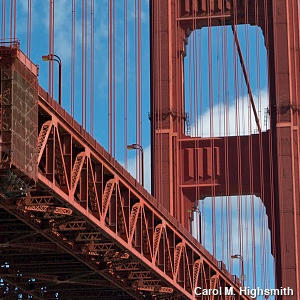 Hard, shiny, and tough—metals are the macho poster boys of the material world. Learning how to extract these substances from the Earth and turn them into all kinds of useful materials was one of the most important developments in human civilization, spawning tools, jewelry, engines, machines, and giant static constructions like bridges and skyscrapers. Having said that, "metal" is an almost impossibly broad term that takes in everything from lead (a super-heavy metal) and aluminum (a super-light one) to mercury (a metal that's normally a liquid) and sodium (a metal soft enough to cut like cheese that, fused with chlorine, you can sprinkle on your food—as salt!). What exactly are metals and what makes them so useful? Let's take a closer look!

Photo: Metals like iron help bridges hold their proud heads high. The Golden Gate bridge, shown here, is made from 75 million kg of steel (an alloy of iron)... so why isn't it a cold, dull gray? It's painted to protect it from rusting in the salt-water air (in a warm, distinctive color known as International Orange). Detail of the Golden Gate Bridge by Carol M. Highsmith. Photo from the Jon B. Lovelace Collection of California Photographs in Carol M. Highsmith's America Project, Library of Congress, Prints and Photographs Division.

You might think Earth is a big lump of rock, hard on the outside and soft in the middle—but quite a lot of it is actually metal. What exactly is metal? Over three quarters of the chemical elements that occur naturally on our planet are metals, so it's almost easier to say what metal isn't. 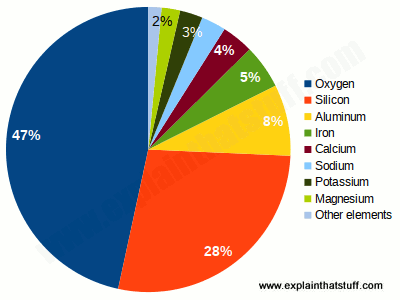 When we talk about metals, we're usually referring to chemical elements that are solid (with relatively high melting points), hard, strong, durable, shiny, silvery gray in color, good conductors of electricity and heat, and easy to work into various different shapes and forms (such as thin sheets and wires). The word metal is quite a broad and vague term, and not something you can define precisely.

When we talk about nonmetals, it ought to mean everything else—although things are a bit more complex than that. Sometimes you'll hear people refer to semi-metals or metalloids, which are elements whose physical properties (whether they're hard and soft, how they carry electricity and heat) and chemical properties (how they behave when they meet other elements in chemical reactions) are somewhere in between those of metals and nonmetals. Semi-metals include such elements as silicon and germanium—semiconductors (materials that conduct electricity only under special conditions) used to make integrated circuits in computer chips and solar cells. Other semi-metals include arsenic, boron, and antimony (all of which have been used in the preparation—"doping"— of semiconductors). 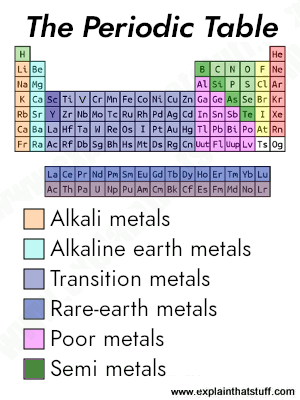 Artwork: The periodic table is dominated by metals. Over three quarters of the natural elements are metals of one kind or another.

Take a look at the periodic table (the way we draw the elements in a chart so ones with similar physical and chemical properties line up together) and you'll see two types of metal get special treatment. The middle of the table is dominated by a large group of elements called the transition metals (or transition elements); most of the familiar metals (including iron, copper, silver, and gold) live here, along with less well known metals such as zirconium, osmium, and tantalum. The other group, called the rare-earth metals, is often printed separately from the main periodic table and includes the fifteen elements from lanthanum to lutetium plus scandium and yttrium (which are chemically very similar). They're called "rare-earth" metals for the rather obvious reason that they were originally believed to exist in extremely scarce deposits in Earth, though some are now known to be relatively common. Like many conventional metals, the rare-earths don't occur naturally in their pure form, but only as metal oxides. 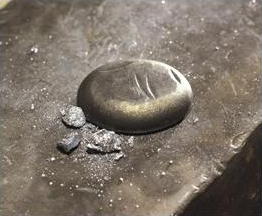 Photo: An intermetallic compound (similar to an alloy) made from silver (a transition metal) and yttrium (a rare-Earth metal). Photo taken at Ames Laboratory courtesy of US Department of Energy.

When is a metal not a metal? Look at a car, plane, or motorcycle and you see lots of metal—or do you? Quite a lot of the metal-like materials around us are actually alloys: metals that have been mixed with other materials (metals or nonmetals) to make them stronger, harder, lighter, or superior in some other way. Steel is an alloy of iron, for example, that contains a small amount of carbon (different types of steel contain more or less carbon). Bronze is an alloy of copper and tin, while brass is the alloy you get when you mix copper and zinc.

It's also very common to find plastics that have been electroplated (coated with a thin layer of a metal element, using electricity) to make them look like shiny metals. Plastics treated this way look shiny and attractive, like metals, but are usually cheaper, lighter, and rustproof—but also weaker and less durable.

How are metals made? 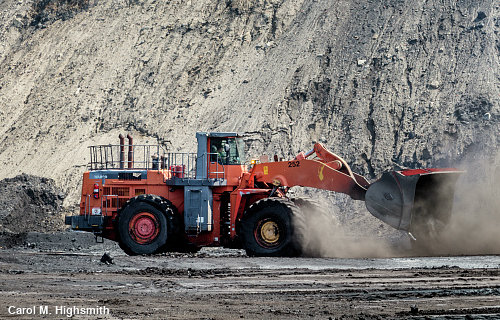 Whether you're assembling airplanes or building batteries, you need metals—and lots of them. The snag is that metals generally don't occur in the ground in exactly the way that we'd like to find them, in their pure form and in deposits large enough to make it worth our while to extract them. Often they're buried in rock with deposits of other metals and they exist not as pure elements but oxides (metals fused with oxygen atoms) and other compounds. Producing large quantities of a metal like iron, aluminum, or copper therefore involves two distinct operations: extracting an ore (a deposit consisting usually of a huge amount of useless rock and smaller amounts of useful metals) from a mine or quarry and then refining the ore to get the metals away from their oxides (or other compounds) into the pure form that we need.

Exactly how this is done varies from metal to metal and from place to place, but usually involves a mixture of mechanical processing (such as grinding, filtering, or using water to wash away unwanted materials), chemical treatment (using acids, perhaps), heating (smelting iron ore, for example, involves roasting it in air to remove the impurities), and electrical treatment (such as electrolysis—separating a chemical solution into its constituent elements by passing an electric current through it).

With so many chemical elements classified as metals, you might think it would be difficult to generalize about them. But that problem is true of pretty much any generalization: every house is different, but we can still say that houses tend to have doors, walls, windows, and a roof and provide shelter from the weather—and we can all sketch one on paper. 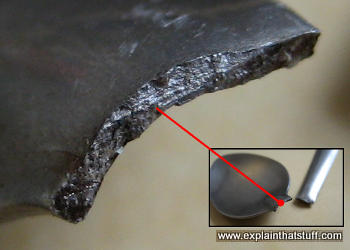 Photo: Metal objects that are repeatedly stressed and strained (pulled, pushed, bent, twisted, or otherwise subject to forces) will undergo fatigue and then suddenly fracture. Here's a teaspoon that I bent one time too many showing (left) a closeup of the fracture and (right) the broken spoon for context.

The generalizations we make about metals are:

How do metals conduct heat and electricity?

Why are metals such good conductors of heat and electricity? The simplest explanation is to think of the atoms in a metal as ions (positively charged nuclei) surrounded by a sort of sea of free electrons that wash readily through the entire structure, carrying heat or electrical energy as they go. Remember that opposites attract, in electricity as well as magnetism, so the static-electric pull between the positively charged ions and the negatively charged electrons makes for a tightly bonded structure that is strong and hard. The atoms can still move past one another (with difficulty) and that's why metals are relatively easy to work and shape.

Animation: Metals conduct electricity because they have "free" electrons (blue) that are not fixed to any particular atom (black). The electrons can move through the whole metal carrying electrical energy from one end to the other.

What is the band theory?

Metallurgists (scientists who study metals) prefer to explain the properties of metals using a more complex idea called the band theory. You've probably learned in school that the electrons in a single, isolated atom are arranged in energy levels (sometimes referred to as shells, sometimes as orbitals—different ideas but they're broadly talking about the same thing). In a solid, there are lots of atoms sitting next to one another, but they don't behave as isolated units. Instead, their electron orbitals overlap, forming what are called bands that extend between atoms (they're molecular orbitals, in other words), and spread across the entire solid.

According to this theory, solids have two bands called the valence band (containing electrons that are involved in bonding) and the conduction band (which allows electrons to move freely through a metal, carrying heat or electrical energy). What distinguishes metals, nonmetals, and semi-metals is the way electrons move between the bands:

Metals react easily with other elements, their atoms giving up electrons to form positive ions and compounds known as salts. The "salt" you might sprinkle on your dinner is a typical example (it's the compound that forms when sodium metal reacts with chlorine gas), but it's only one of hundreds of different salts. The general willingness of metals to react with other elements is the main reason why they're often so difficult to extract from ores: they react so readily with oxygen in the air (or sulfur in the ground) that they're more likely to exist as oxides (or sulfides) than in their pure form.

Artwork: We can understand how different metals and their alloys behave by looking at the arrangement of atoms inside them. Left: Iron is easy to hammer into new shapes because its atoms are arranged in neat rows that can slip past one another. Right: Stainless steel (an alloy of iron) is much harder because small carbon atoms (red) in the "interstitial" spaces stop the iron atoms from moving. It also contains chromium (yellow) and other atoms (green). The chromium atoms react with oxygen in the air to form a protective outer "skin" of chromium oxide (dotted border line). This helps to stops stainless steel from rusting.

Our website has more detailed articles about some of the more common and useful metals, including their properties, how they're extracted, and where in the world they occur in abundance:

We also have a more general introduction to materials science.