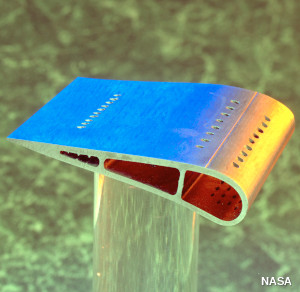 Nickels and dimes—think of nickel and you probably think of coins jangling about in your pocket or, if you're electrically minded, of rechargeable batteries. Those are just two of many common uses for nickel, one of the quieter, more modest metals. It's not big and showy, like gold and silver, and it's less well-appreciated than hi-tech aerospace metals such as aluminum and titanium (even though it has important applications in those fields too). Let's take a closer look at this unassuming element and find out more!

Photo: Nickel is widely used in high-temperature "superalloys" to make such things as this aerospace turbine blade. Photo by courtesy of NASA Glenn Research Center (NASA-GRC).

Photo: Another example of a nickel superalloy turbine blade. Read more about why nickel is used in turbine blade metallurgy.

Nickel has featured in alloys (such as cupronickel, used in coins) for thousands of years, but it was recognized as a chemical element in its own right only in 1751. That was when Swedish chemist Baron Axel Frederic Cronstedt (1722–65) first isolated pure nickel from a reddish ore (mineral-containing rock) called niccolite. Niccolite got its name because it superficially resembled copper ore, though contained no actual copper. Miners who tried to extract it blamed "Old Nick" (the devil) for stealing the copper—and the name stuck. These days, you'll find nickel among the transition elements (transition metals) in group 10 (formerly group VIIIb) of the periodic table. It's very like iron in some ways and very like copper in others—hardly surprising, perhaps, given that it sits midway between them in the periodic table.

Where does nickel come from? 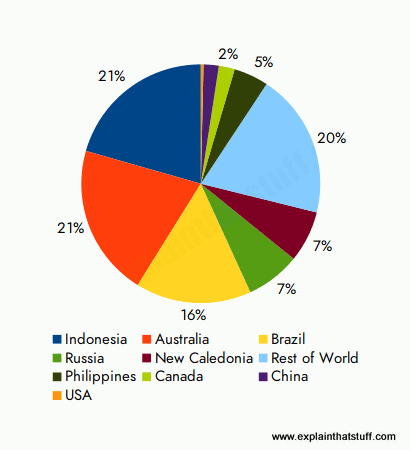 You might think nickel is fairly ordinary, but some of it is out of this world—quite literally. Most of the meteorites that hit Earth contain nickel (if you find a rock and it contains more than about five percent nickel, it's probably a meteorite). Nickel is a reasonably common metal: the 22nd most widespread element in Earth's crust (roughly twice as common as copper), which contains roughly 75 parts per million (0.0075 percent) nickel.

Most of the nickel we use on Earth is mined from a number of nickel ores: pentlandite and pyrrhotite (iron nickel sulfides, the two most important nickel ores), garnierite (hydrous nickel silicate), millerite (nickel sulfide), and niccolite (nickel arsenide).

The leading nickel producers are Indonesia, Philippines, Canada, and New Caledonia (together responsible for mining over half the world's nickel), followed by Australia and Russia; the United States currently has no active nickel mines but does produce a relatively small amount of nickel (23,000 tons—about 1/10 as much as Canada) as a byproduct from copper and palladium-platinum mines. The world has at least 130 million tons of nickel reserves on land, with much more believed to be available on the ocean floor (US Geological Survey, 2018).

Like some other metals, nickel can be extracted from its ores with the help of smelting (heating in a blast furnace), electrolysis (where the ore is split into its constituents by passing an electric current through a solution), or by reacting it with acids (in the Mond process). 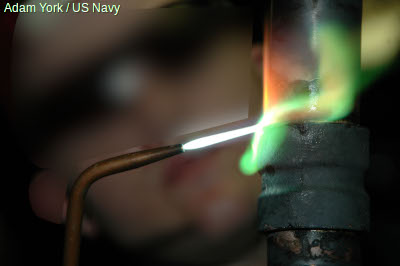 Photo: A US Navy technician welds a copper-nickel pipe onboard the aircraft carrier USS Kitty Hawk. The greenish-blue flame is characteristic of both copper and nickel. Photo by Adam York courtesy of US Navy.

Nickel is a typical metal: solid at everyday temperatures, reasonably strong and tough, malleable (easy-to-work), and ductile (capable of being pulled into wires). It's fairly easy to polish, a reasonably good conductor of heat and electricity, and quite magnetic as well. In its strength and toughness, it's similar to iron (though less magnetic), though it's much more resistant to corrosion and oxidation (and, in that respect, more like copper). Crystals of nickel have a face-centered cubic (FCC) structure.

By itself, nickel is relatively unreactive. It does react with strong acids but not alkalis (which is why it's often used to line containers for alkaline substances).

What is nickel used for? 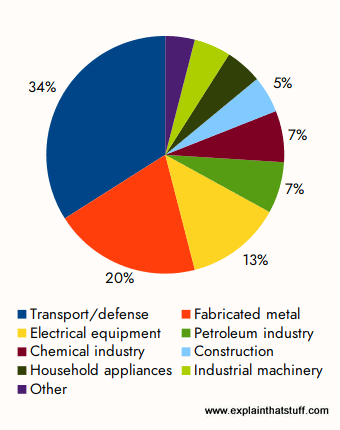 Chart: What do we use nickel for? Main end uses for nickel in the United States in 2015. Source: U.S. Geological Survey, Mineral Commodity Summaries: Nickel, January 2016. As of August 2018, these are still the newest figures available from the USGS (more recent figures for uses are broken down in a different way).

The vast majority of nickel is used as a constituent of alloys; only a relatively small amount is used as pure metal in its own right. Worldwide, around two thirds of all nickel is used in manufacturing stainless steel (the figure is just over half in the United States), while hard and corrosion-resistant nickel steel (steel with around 3 percent nickel) is important for making a wide range of car parts, including valves and drive shafts of various kinds. 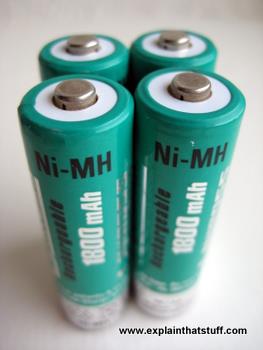 Photo: Nickel as many of us encounter it: a pack of nickel metal hydride (NiMH) rechargeable batteries. NiMH batteries last longer and do not contain the toxic cadmium metal found in older nickel cadmium ("nicad") batteries.

Nonferrous alloys (ones that do not contain iron) are the next most common use for nickel. Cupronickel (used to make coins) is about three quarters copper and one quarter nickel. Other nickel alloys include shape-memory nitinol that combines nickel with titanium (used in such things as bendy eyeglass frames), and a wide range of hi-tech, aerospace "superalloys" (alloys that work well at very high temperatures). Turbine blades (used in jet engines and also in the steam turbines that generate electricity in most large power plants) are typically coated with nickel to give them greater strength and a protective layer that provides corrosion resistance. Nickel is also used by itself for electroplating metals such as iron and steel (again, for corrosion resistance), in powdered form to make catalysts (substances that speed up chemical reactions), to make nickel-mesh screens for printing textiles, and in batteries.

Important compounds of nickel include nickel nitrates, chlorides, and sulfates, all of which are used in electroplating. Nickel oxides are used in batteries and fuel cells. Nickel ferrites (nickel-iron compounds) are widely used to make electromagnetic parts for such things as transformers. 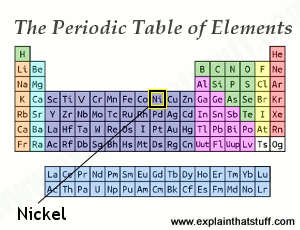 Artwork: The periodic table of elements showing the position of nickel (Ni). With 28 protons, it's quite high up in the table, so it's relatively light. Nickel is right next to copper, so their atoms are of similar sizes, and that explains why they easily "mix" together to form cupronickel, a type of substitution alloy commonly used to make coins.