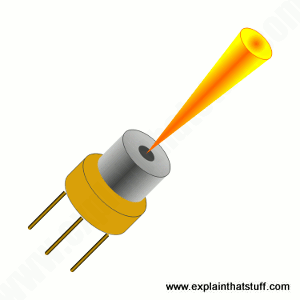 Lasers are the stuff of science fiction: big, heavy boxes that make blazing blasts of light. If you've ever seen an ordinary laser in a laboratory, you'll know it's quite a hefty beast: typically about as long as your forearm, fairly heavy, quite hot, and capable of producing a very intense beam of light. But if lasers are that big, how come we can use them in small things like portable CD players and handheld barcode scanners? The answer is that we don't! These things use a very different kind of laser that's about the same size as (and works in a similar way to) an ordinary LED (light-emitting diode). Known as semiconductor lasers (also called diode lasers or injection lasers), they were developed in the early 1960s by Robert N. Hall and, largely because they're so compact and inexpensive, are now the most widespread lasers in the world. Let's take a closer look!

What is a semiconductor laser?

Chances are you've used a semiconductor laser in the last few days without even knowing it. If you've watched a DVD, you've "looked through" one; if you've been into a grocery store and had a barcoded product swiped through the checkout you've bought with one; if you've made a long-distance telephone call by fiber-optic cable you've "talked through" one; and if you've printed something with a laser printer your printout has passed very near one. Semiconductor lasers make powerful, precise beams of light (like ordinary lasers), but they're about the same size as simple LEDs—the little colored lamps you see on electronic instrument panels.

If you've read our article on diodes, you'll already have an idea how LEDs work. Essentially, an LED is a semiconductor sandwich with the "bread" made from slices of two different kinds of treated silicon known as p-type (rich in "holes" or, in other words, slightly lacking electrons, the tiny negatively charged particles inside atoms) and n-type (with slightly too many electrons). Put the two slices together and you make what's called a p-n junction diode that has all kinds of interesting properties.

In an ordinary diode, the p-n junction works like a turnstile that allows electric current to flow in only one direction (known as forward-biased operation). As electrons flow across this barrier, they combine with holes on the other side and give out energy in the form of phonons (sound vibrations) that disappear into the silicon crystal. In an LED, much the same process takes place but the energy is given out not as phonons but as photons—packets of visible light. 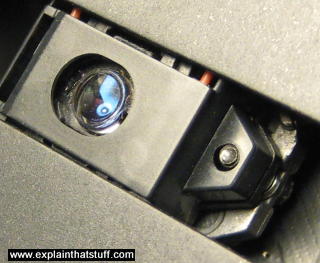 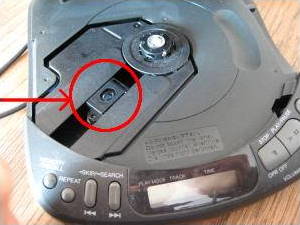 Photo: The smaller circle on the bottom left of this photo is a semiconductor laser diode in a CD player. The larger, blue-tinted circle on the top right is a lens that reads the reflected light bouncing down off the CD. Never attempt to look at the laser light in a CD player: you could easily blind yourself.

In a laser diode, we take things a stage further to make the emerging light more pure and powerful. Instead of using silicon as the semiconductor, we use a different material, notably an alloy of aluminum and gallium arsenide (indium gallium arsenide phosphide is another popular choice). Electrons are injected into the diode, they combine with holes, and some of their excess energy is converted into photons, which interact with more incoming electrons, helping to produce more photons—and so on in a kind of self-perpetuating process called resonance. This repeated conversion of incoming electrons into outgoing photons is analogous to the process of stimulated emission that occurs in a conventional, gas-based laser. 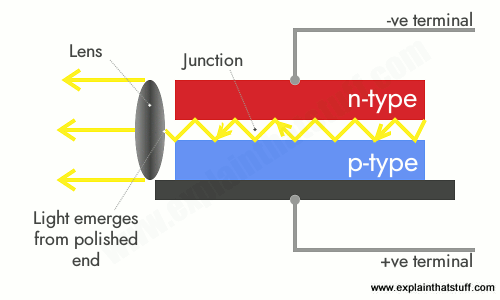 Artwork: The basic setup of a laser diode. Laser light is produced when electrons and photons interact in a p-n junction arranged in a similar way to a conventional junction diode or LED. One end of the diode is polished so the laser light can emerge from it. The other ends are left roughened to help confine the light.

In a conventional laser, a concentrated light beam is produced by "pumping" the light emitted from atoms repeatedly between two mirrors. In a laser diode, an equivalent process happens when the photons bounce back and forth in the microscopic junction (roughly one micrometer wide) between the slices of p-type and n-type semiconductor, which is technically known as a Fabry-Perot resonant cavity (a kind of interferometer). The amplified laser light eventually emerges from the polished end of the gap in a beam parallel to the junction. From there, it goes on to read music from your CD, scan the price on your cornflakes, print out your college dissertation, or do a thousand other useful things!

Early laser diodes could fire out only a single, relatively puny beam, but ingenious electronics engineers soon found ways to make them considerably more powerful. Since the 1990s, one common approach has been to mount a number of laser diodes on top of one another (like an apartment building) and then focus their individual beams into a single output beam using a collimator and/or lens. This kind of arrangement is variously called a semiconductor laser stack, stacked laser diode, or just a diode stack. Apart from making more power than a single laser diode, a stack opens up the possibility of generating multiple different wavelengths at the same time (because each laser in the stack can make a different one). Instead of a single P-N junction, there are multiple ones, and the laser light beams emerge from the active layers in between them; typically, there's also at least one tunnel junction between the stacked layers. A single pair of terminals (sometimes called Ohmic contacts) feeds electrical power to the entire stack. 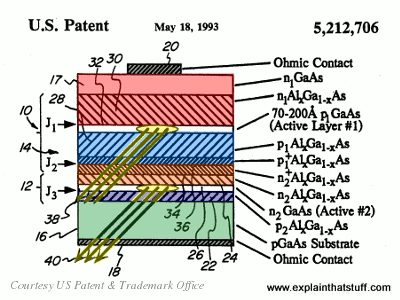 Artwork: A simple stacked laser diode, comprising two diode lasers one on top of the other, and made from doped layers of aluminum gallium arsenide. The terminals (Ohmic contacts) are shown in gray at the top and bottom, the substrate (base material) is green, P-type layers are shown in blue, and N-type layers in red. The tunnel junction is labeled J2. Artwork courtesy of US Patent and Trademark Office, from US Patent #5,212,706: Laser diode assembly with tunnel junctions and providing multiple beams by Faquir C. Jain, University of Connecticut, May 18, 1993.

Who do we thank for this fantastic invention? General Electric's Dr Robert N. Hall, who filed his patent for the idea ("Stimulated emission semiconductor devices") on October 24, 1962 (it was granted as US Patent #3,245,002 on April 5, 1966). Here's one of the drawings from that patent, showing the basic arrangement of the parts described up above. The numbering is Hall's original, but I've added the coloring and simplified descriptions to make it easier to follow:

You can read much more detail in Robert Hall's patent, listed in the references below.

What can we use diode lasers for? 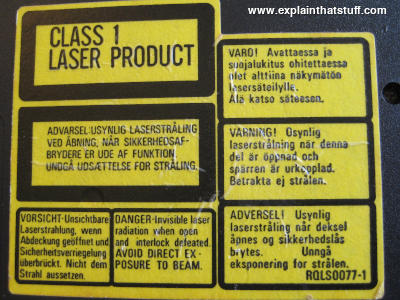 Photo: Warning: may (does) contain lasers! Labels like this, on products like CD/CVD players, laser printers, laser pointers, and so on tell you that there's a diode laser inside.

Ordinary lab lasers are big beasts, as we've already seen—not so different from the one Goldfinger famously used in the James Bond film of the same name. Putting it another way, anything remotely compact that needs a laser to power it is likely to use a diode laser rather than a "Goldfinger laser." CD players, barcode scanners, fiber-optic phone lines, dental tools, laser hair-removal devices, laser pointers, and laser printers all use diode lasers because they're small, compact, and inexpensive. It doesn't follow that they're low-powered and puny, however—for three reasons.

The recent development of deep ultraviolet laser diodes points the way to smaller and cheaper biosensors and numerous other exciting biological applications, including cheap food and water sterilization.

These are suitable for undergraduate level:

For much deeper technical detail, try these representative patents (and follow the prior art links and citations inside them to find others):