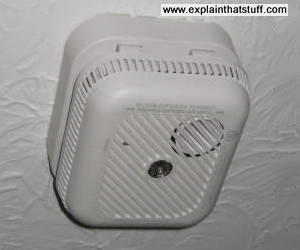 We've all heard of Native Americans who used smoke signals to send simple messages over long distances. But sometimes when we see smoke it's sending a message that's very alarming: there's a fire nearby and our life is in danger. If fire breaks out in the daytime, we can usually smell it and do something about it. But if we're asleep at night, fire can steal the oxygen we need to breathe or produce toxic carbon monoxide gas that can send us into a deep and deadly slumber from which we may never recover. In the United States, more people die from house fires than from all natural disasters combined. Fortunately, thanks to modern technology, there's an inexpensive and very reliable way of detecting fires: the electronic smoke detector. How does this amazing gadget work?

Photo: An optical smoke detector. Smoke enters through the slits around the side, triggering an electronic horn, which sounds through the large circular opening on the right. The dark circle in the middle is a test button with a built-in LED that flashes to show the detector is working okay.

The detector must be screwed to your ceiling because that's where smoke heads for when something starts to burn. Fire generates hot gases and because these are less dense (thinner—or weigh less per unit of volume) than ordinary air they rise upward, swirling tiny smoke particles up too. As you can see in the photo up above, the detector has slits around its case (1), which lead to the main detection chamber. An invisible, infrared light beam, similar to the ones that Tom Cruise dodged, shoots into the chamber from a light-emitting diode (LED) (2). The same chamber contains a photocell (3), which is an electronic light detector that generates electricity when light falls on it. Normally, when there is no smoke about, the light beam from the LED does not reach the detector. An electronic circuit (4), monitoring the photocell, detects that all is well and nothing happens. The alarm (5) remains silent.

But if a fire breaks out, smoke enters the chamber (6) and scatters some of the light beam (7) into the photocell (3). This triggers the circuit (8), setting off the shrill and nasty alarm (9) that wakes you up and saves your life.

Another type of smoke alarm is less expensive than the optical type, more common, and works in a totally different way. You can think of it as an electronic nose because, like the nose on the front of your face, it uses a kind of chemistry to spot unusual molecules (smoke) heading inward. Detectors like this are called ionization smoke detectors.

What does that mean? Inside the detector, there's an ionization chamber open to the air (1) filled with ions (2), which, in this case, are atoms that have lost electrons to make positively charged nuclei. Where do the ions come from? Inside the chamber, there's a small piece of a chemical element called americium (3). It constantly spews out tiny radioactive particles (called alpha particles), which leak into the detection chamber. As they do so, they crash into air molecules and turn them into positively charged ions (shown here as big red blobs) and negatively charged electrons (shown as smaller black blobs). The ions and electrons whiz in opposite directions between two electrodes (electrical contacts, rather like the terminals of a battery). As long as the ions and electrons are moving, a current flows between the electrodes and a circuit (4) in the smoke detector thinks all's well, so the alarm (5) remains silent.

However, if a fire breaks out, smoke particles get into the detector and start to clog up the ionization chamber (6). They attach themselves to the ions and effectively shut off the electric current (7). The circuit in the detector spots that change straight away (8) and sounds the alarm (9). Once the fire is out and the smoke is gone, the detection chamber clears, the ions travel back and forth between the electrodes as before, the circuit shuts down, and the alarm stops sounding.

You can see an example of an ionization detector, opened up, in the photo below: 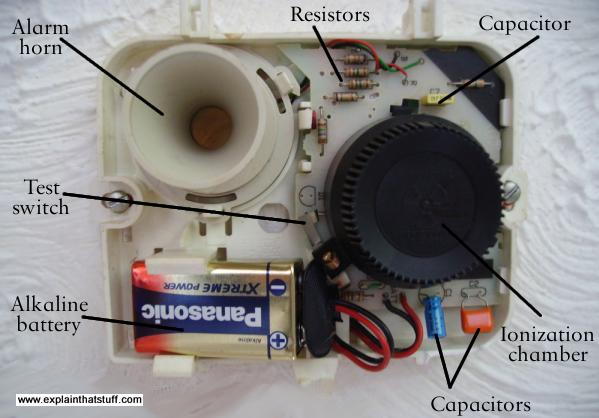 Photo: An ionization smoke detector with the cover removed. The large black cylinder on the right is the ionization chamber where smoke is detected. Note the relatively simple electric circuit, made from basic components such as resistors and capacitors. 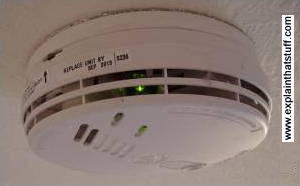 Photo: Check smoke detectors regularly. Make sure the power light is working (this one has a green indicator that shows it's OK) and vacuum out the dust from time to time. Note the "replace by" date too: smoke detectors don't last forever!

If you've not got a smoke detector in your home, why not? They cost just a few pounds/dollars and could save your life. Get one at once or, better still, get several and put them up in key places around your home. If you have got smoke detectors, make sure you check they work once a week (are the batteries still good?) and vacuum the dust out of them regularly. Get into the habit of checking detectors whenever you clean the room you're in. A defective smoke detector is as bad as—or worse than—no detector at all, because it gives you a false sense of security.

Smoke detectors aren't always effective. Sometimes they don't sound during a fire—and there are various reasons why that might happen. You can see from the chart below that in over half of those failure cases (58 percent), either the smoke didn't reach the detector or the detector wasn't in the place where the fire broke out. Missing or defective batteries explained a further 20 percent of cases. The message is clear: make sure you have plenty of smoke detectors, not just one, and check them regularly. 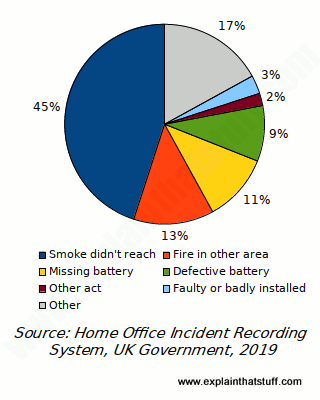 Chart: Why do smoke detectors fail to sound during a fire? Here are the most common reasons. Source: UK Government Home Office: Data sheet Fire0704: Percentage of smoke alarms that did not operate in primary dwelling fires and fires resulting in casualties in dwellings, by type of alarm and reason for failure, September 2019. "Other act" includes detector removed or switched off. "Other" includes the detector being damaged by the fire and miscellaneous explanations not otherwise accounted for.

Which is best, ionization or optical?

According to a detailed study by the US National Institute of Standards and Technology: "Ionization type alarms provided somewhat better response to flaming fires than photoelectric alarms, and photoelectric [optical] alarms provide (often) considerably faster response to smoldering fires than ionization type alarms." Smoke detectors are trivially inexpensive compared to the cost of fire damage—and life, of course, is priceless. Although any smoke alarm is better than none, fit both types of detector if you possibly can.

How effective are smoke alarms?

Increasing use of smoke alarms is one of the reasons why there's been a long, steady fall in fire deaths over the last four decades since they first became popular. According to the US National Fire Protection Association (NFPA), the fire death rate is over twice as high in homes that lack a working smoke alarm (either no alarm at all or one that's not functioning properly). In fires where there was a smoke alarm present but it failed to sound, dead or missing batteries were responsible in 43 percent of cases. That's why it's so important to check your alarm regularly and ensure that it's working! 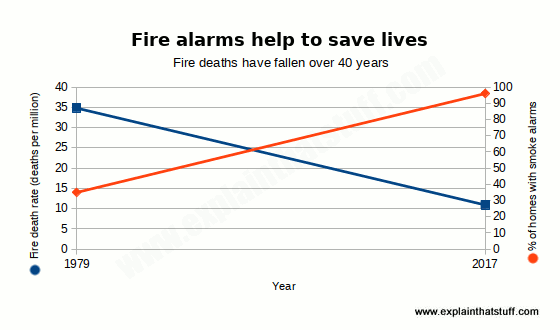 Chart: The rising use of smoke alarms from the late-1970s onward (red line) has helped to bring about a significant fall in fire deaths (blue line), although other factors do come into play too. Chart drawn by explainthatstuff.com using data from "Smoke Alarms in U.S. Home Fires" by Marty Ahrens, NFPA, January 2019 and "Fire in the United States 2004–2013: 17th Edition", US FEMA, March 2016.

Good question! Search online and you'll quickly find out that fire alarms were invented by US physicist and mathematician Francis Robbins Upton in 1890, while the first smoke detector was invented by George Andrew Darby in England in 1902. A more detailed search will tell you both of these "facts" are wrong.

According to the US Patent and Trademark Office database, Francis Upton and his partner Fernando Dibble filed US Patent 436,961: Portable Electric Fire Alarm on March 24, 1890, and the patent was granted on September 23 the same year. But that wasn't the first fire alarm, because the USPTO also has on record US Patent 344,673: Automatic fire alarm and extinguisher by William Neracher of Cleveland, Ohio, filed on September 8, 1885 and patented on June 29, 1886—several years earlier than Upton and Dibble's. Neracher's alarm is entirely mechanical and works quite like a modern fire sprinkler.

The earliest smoke detector I can find on the US Patent and Trademark Office database is this one, patented by Oscar Freymann and Charles Tolman of Brooklyn, New York City, in December 1901 (and there might be even earlier ones). Surprisingly, for the early 20th century, it's an electric detector, but it doesn't use a photocell or ionization (those technologies are much more recent).

Artwork: From US Patent 688404: Smoke Detector by Oscar Freymann and Charles Tolman, American Equipment Company, patented December 10, 1901, courtesy of US Patent and Trademark Office, with colors and new numbers added for clarity.

In Freymann and Tolman's invention, the detecting device is a braided thread of silk, horsehair, or similar, which is boiled in soda for about 20 minutes, then dried and stretched. For reasons the inventors were unable to discover, fibers treated in this way worked as a very effective smoke detector: in the presence of smoke, they loosened and stretched; when the smoke disappeared, they tightened up again.

What's inside the detector?

Once Freymann and Tolman had discovered their fiber, it was relatively simple to build a part-electrical, part-mechanical smoke detector around it:

How does it work?

When smoke enters the chamber through the holes at the bottom, it makes the fiber (1) contract. That makes the light blue lever (2), tilt downward, so the green lever (3) also tilts down, allowing the upper electrical contact (4) to touch the lower one. This completes the circuit and triggers the alarm. Ingenious!

It's hard to attribute optical smoke detectors to a single inventor; quite a few different people developed photoelectric-type detectors during the 20th century—and you'll find a small selection of their patents listed below.

The cheap, battery-powered ionization smoke detectors most of us have at home are more recent inventions, popularized by Duane Pearsall in the 1960s and 1970s. His company, Statitrol, was in the process of developing a static electricity neutralizing machine that worked by detecting flows of ions. During a lab test, one of the engineers happened to light up a cigarette and the drifting smoke triggered the machine, which led Pearsall to realize that it could detect smoke as well as ions. Figuring he was onto a good thing, he designed a low-cost ionization detector that sold as the SmokeGard. Although Pearsall was granted US Patent D226539S: Fire Detector for the design (basic appearance) of his detector on March 20, 1973, he didn't receive a patent for its basic working mechanism.

The earliest patent for an inexpensive, modern ionization detector seems to be US Patent 3767917: Ionizing-type fire alarm sensor, issued to Swiss inventors Thomas Lampart and Max Kuhn on October 23, 1973, which they'd previously patented in Switzerland on July 23, 1970. Earlier inventors had described ways of detecting smoke using ionization, however, including Robert Crawford, in US Patent 3271756: Method and apparatus for detecting a hazardous condition (filed in 1960 and granted in 1966), and Swiss physicist Walter Jaeger, in the 1930s.