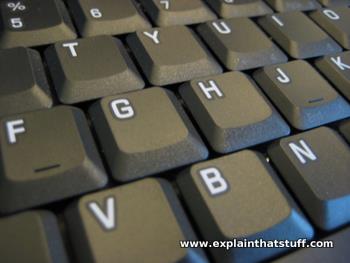 Tap tap tap! Tap tap tap! That's the sound of someone thinking aloud in the 21st century, which typically means banging out words in a blog or an email or word-processing an essay or a forum post. Computer keyboards are generally quicker to use than old-fashioned typewriter keyboards, though they're still no match for dictating your documents with voice recognition software. Have you ever stopped to wonder what your keyboard's like inside? You might be surprised to find it's just a load of electrical switches. Let's take a closer look!

A word of warning!

You've heard me say this before. Taking things to bits is a brilliant way to learn how they work but, for a whole bunch of reasons, it's often dangerous, difficult, or ill-advised. In the case of computer keyboards, there's not a lot of danger, but there are a couple of hundred tiny pieces that fall out very easily. If you drop the keyboard while you're messing about with it, expect to find yourself taking at least a couple of hours to put it all back together again. You have been warned! 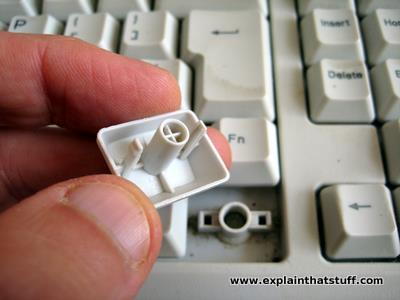 Pull a key off the keyboard and you can see roughly how it works. There's a little hole in the plastic base and the keyboard has a long round bar the same shape. When you press the key, the bar pushes down through the hole to touch the contact layers below. Inside the hole, there's a little tiny piece of rubber (you can't see it in this photo) that stops the key moving down and pushes it back up when you release it. This is what gives the spring to the keys.

2. What's under the keyboard? 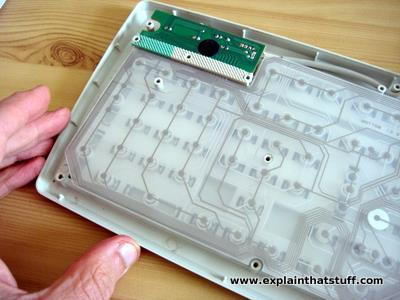 Take off the keyboard's bottom panel and you can see how it all works from beneath. You can see the transparent plastic contact layers that detect key presses and (through those layers) you can see the round bars poking the keys down from above. The green rectangle at the top contains three small LEDs that activate the indicator lights for "Num lock", "Caps lock", and "Scroll lock". Notice also the cable running along the inside of the case at the top of the keyboard, which carries electrical signals from the keyboard to your computer's USB port (or PS/2 port on older machines).

3. How do the keys press down? 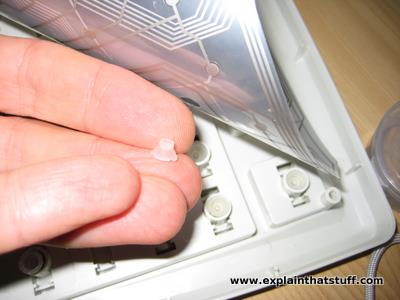 Peel back the electrical contact layers and you can see the bottom of the keys and where they press down. Balancing on my fingertip, you can see one of the little rubber pieces that makes the keys bounce up and down. Notice the pattern of electrical tracks on the contact layers. In this photo, we are looking down through the bottom of the keyboard (so the keys are underneath). 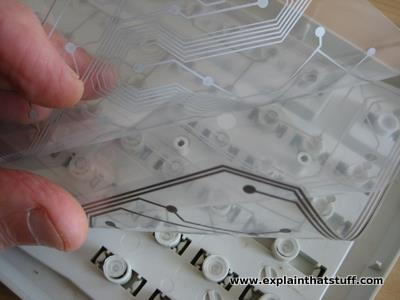 This is the magic part of a keyboard. There are three separate layers of plastic that work together to detect your key presses. Two of them are covered in electrically conducting metal tracks and there's an insulating layer between them with holes in it. The dots you can see are places where the keys press the two conducting layers together. The lines are electrical connections that allow tiny electric currents to flow when the layers are pressed tight to one another by a key moving down from above.

In the photo below, you can see a closeup of the underside of one key—and, if you look closely, just about see how it works. There's one set of electrical connections on the lower sheet of plastic, printed in light gray. The other set is on the upper sheet of plastic and printed in dark gray. The two sheets are kept apart by a clear plastic layer except at the holes, which is where the keys push down to make the two sheets touch. 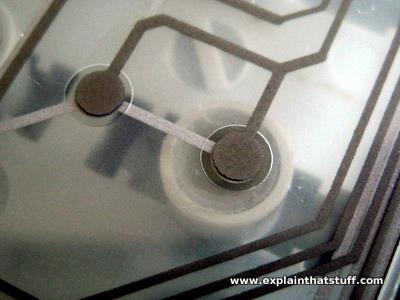 5. How does it all work together?

When you press a key, the top and bottom contact layers come together and the keyboard sends a signal to your computer—just like this...

How do keypads work? 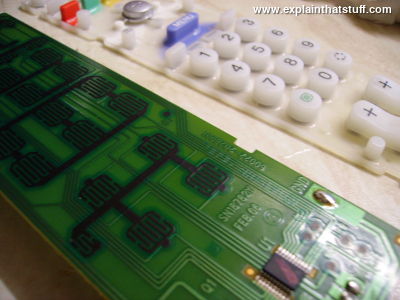 Photo: A typical TV remote control is made from two layers. In this photo, I've taken them apart and placed them side by side. Left: The main circuit board (green) has patterns of electrical contacts on its surface that sit directly underneath the rubber keys. Right: The rubber membrane keypad (white) is made from a very flexible plastic. When you squash a key down with your finger, you push the electrically conducting contact on the base of the key onto the tracks on the circuit board underneath, closing a switch and activating that key.

TV remote controls, cellphones, push-button telephones, and all kinds of other little gadgets use a different kind of key-switch mechanism that's simpler, more compact, and cheaper to make: it's called a rubber-membrane keypad. Instead of plastic keys and contact layers, there are just two parts. On top, there's the keypad part with all the keys molded from a single piece of flexible (rubbery) plastic. The underside of each key is coated with a small patch of electrically conducting material. The second part of the keypad is a layer of electrical contacts formed directly onto a circuit board. When you press down on a key, the conducting material bridges the contacts, completes a switch, and triggers the specific circuit for that key. The problem with keypads like this is that you get oily films or dirt building up between the two layers, which can stop one or more keys from working. They also feel very "squidgy" to the touch, which makes them unsuitable for ordinary computer keyboards.

How to make your laptop keyboard last longer 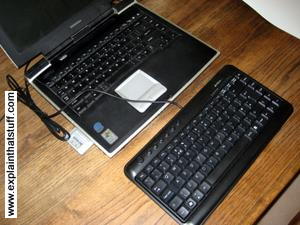 Photo: Using a laptop with an external keyboard. This is a compact keyboard without a numeric keypad so it takes up much less room than a full-sized keyboard. Sometimes an arrangement like this is uncomfortable because it puts the screen too far from your eyes to see. If you have that problem, prop your laptop on a box or buy a stand (search online for "laptop stand" or "laptop riser").

If you write a lot—like I do—and you use a laptop as your main computer, don't be at all surprised if you wear out the keyboard. How can you wear out a keyboard? Easily! Let's say you write 1000 words a day (a fairly high output for a writer, but not unusual), so you're pressing as many as 50–100,000 keys a week! Clattering away at that rate, it won't take you more than a few years to clock up a few million key presses—which is roughly the life expectancy of a basic keyboard.

Laptop keyboards are much more flimsy than desktop keyboards: they're designed for casual home use, not constant, industrial-strength pounding. Why do the keys wear out? Each time you press, you squeeze the contact layers together. Sooner or later, you'll find some keys that stick down permanently (as though they're on auto-repeat), even when you're not pressing, because the layers refuse to spring apart again (or sometimes get dirt trapped in them). I know from experience that having a new keyboard fitted to a laptop can be extremely expensive: with labor charges, it can cost up to a third as much as a new machine. I had to wear out the keyboard twice on one of my laptops before I learned my lesson.

And what is the lesson? If you do lots of typing, it will pay you to buy an inexpensive plug-in USB (or wireless Bluetooth) keyboard and use your laptop propped up on a stand (or a box). An external keyboard can cost as little as $10 (£5 or so). Buy one with a new laptop and use it routinely and you'll save a fortune on keyboard repairs. As an added benefit, a plug-in keyboard may also feel more comfortable and allow you to type faster, and, if it's set up properly, it could reduce the chance of your developing medical problems like RSI (repetitive strain injury).

Artwork: The original circuit-based computer keyboard? James Martin Comstock's 1969 design has an upper layer of keys (light blue) on springs (yellow), a moving metal contact layer (green, orange, and red), and a circuit board (dark blue) with connection points (yellow), just like a modern keyboard. From US Patent 3,591,749: Printed circuit keyboard, courtesy of US Patent and Trademark Office.

With their strange "QWERTYUIOP" sequence of keys, modern computer keyboards clearly evolved from late-19th-century manual typewriters. Instead of keys mounted on a circuit board, those mechanical monsters used an intricate system of levers and springs to bang noisy metal hammers against a sheet of paper. As electric and electronic were developed, the number of moving parts gradually diminished, yet it's quite hard to settle on any one person or keyboard that made the decisive switch from mechanical keyboard to electronic one. I've looked through invention records and the earliest description I can find of a modern keyboard like the one I've described in this article is US Patent 3,591,749: Printed circuit keyboard by James Martin Comstock of The Singer Company, filed in 1969 and granted in 1971. As Martin explained in his patent, the advantages are obvious: it's cheap to build, has few moving parts to go wrong, and it's easy to connect to other equipment (making it very simple to replace if it ever does fail).

Some other articles on our site you might enjoy: