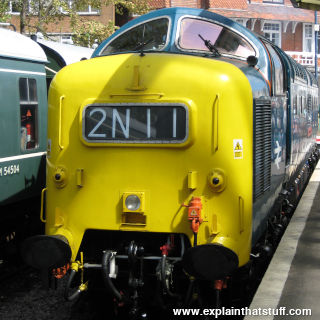 Have you ever gazed in amazement as a giant truck crawls slowly up a hill? Probably not! Such things happen everyday. But stop and think for a moment about what's happening—how a huge, heavy load is being systematically lifted against the overwhelming power of gravity using nothing more than a few cups of dirty liquid (fuel, in other words)—and you might agree that what you're seeing is quite remarkable. Diesel engines are the power behind our biggest machines—trucks, trains, ships, and submarines. On the face of it, they're similar to ordinary gasoline (petrol) engines but they generate more power, more efficiently by working in a subtly different way. Let's take a closer look!

Photo: Diesel engines (like the one in this railroad locomotive) are ideal for pulling heavy trains. This is a superbly preserved (and highly polished!) British Rail Class 55 ("Deltic"), number 55022, called Royal Scots Grey dating from 1960. Here's a picture of the Napier Deltic diesel engine that powers it.

What is a diesel engine? 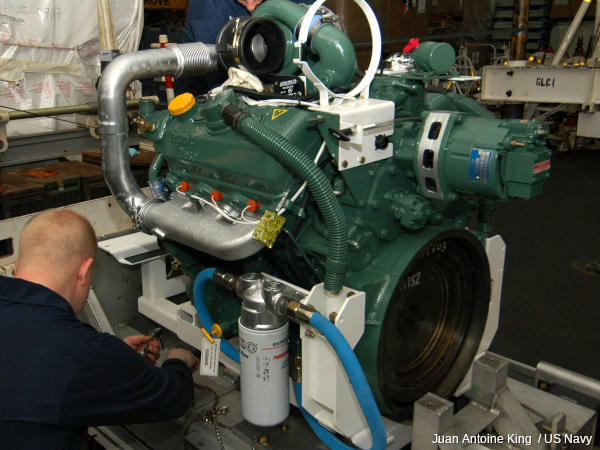 Photo: A typical diesel engine (from a fire truck) made by Detroit Diesel Corporation (DDC). Photo by Juan Antoine King courtesy of US Navy and Wikimedia Commons.

How is a diesel engine different from a gasoline engine?

Gasoline engines and diesel engines both work by internal combustion, but in slightly different ways. In a gasoline engine, fuel and air is injected into small metal cylinders. A piston compresses (squeezes) the mixture, making it explosive, and a small electric spark from a sparking plug sets fire to it. That makes the mixture explode, generating power that pushes the piston down the cylinder and (through the crankshaft and gears) turns the wheels. You can read more about this and watch a simple animation of how it works in our article on car engines.

Diesel engines are similar, but simpler. First, air is allowed into the cylinder and the piston compresses it—but much more than in a gasoline engine. In a gasoline engine, the fuel-air mixture is compressed to about a tenth of its original volume. But in a diesel engine, the air is compressed by anything from 14 to 25 times. [1] If you've ever pumped up a bicycle tire, you'll have felt the pump getting hotter in your hands the longer you used it. That's because compressing a gas generates heat. Imagine, then, how much heat is generated by forcing air into 14–25 times less space than it normally takes up. So much heat, as it happens, that the air gets really hot—usually at least 500°C (1000°F) and sometimes very much hotter. Once the air is compressed, a mist of fuel is sprayed into the cylinder typically (in a modern engine) by an electronic fuel-injection system, which works a bit like a sophisticated aerosol can. (The amount of fuel injected varies, depending on how much power the driver wants the engine to produce.) The air is so hot that the fuel instantly ignites and explodes without any need for a spark plug. This controlled explosion makes the piston push back out of the cylinder, producing the power that drives the vehicle or machine in which the engine is mounted. When the piston goes back into the cylinder, the exhaust gases are pushed out through an exhaust valve and, the process repeats itself—hundreds or thousands of times a minute!

How does a diesel engine turn fuel into power?

Like a gasoline engine, a diesel engine usually operates by repeating a cycle of four stages or strokes, during which the piston moves up and down twice (the crankshaft rotates twice in other words) during the cycle.

In a two-stroke diesel, the complete cycle happens as the piston moves up and down just once. Confusingly, there are really three stages in a two-stroke cycle:

Two-stroke engines are smaller and lighter than four-stroke ones, and tend to be more efficient since they produce power once during each rotation (instead of once during every two rotations, as in a four-stroke engine). This means they need more cooling and lubrication and suffer higher wear and tear. 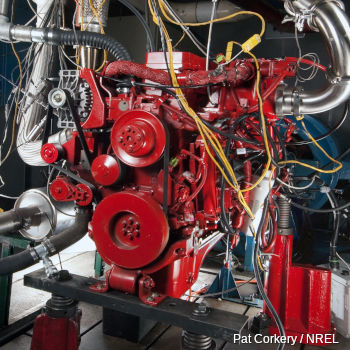 Diesel engines are up to twice as efficient as gasoline engines—around 40–45 percent efficient at best. [2] In simple terms, that means you can go much further on the same amount of fuel (or get more miles for your money). There are several reasons for this. First, they compress more and operate at higher temperatures. A fundamental theory of how heat engines work, known as Carnot's rule, tells us that the efficiency of an engine depends on the high and low temperatures between which it operates. A Diesel engine that cycles through a bigger temperature difference (a higher hottest temperature or a lowest colder temperature) is more efficient. Second, the lack of a sparking-plug ignition system makes for a simpler design that can easily compress the air much more—and this makes the fuel burn hotter and more completely, releasing more energy. There's another efficiency saving too. In a gasoline engine that's not working at full power, you need to supply more fuel (or less air) to the cylinder to keep it working; diesel engines don't have that problem so they need less fuel when they're working at lower power. Another important factor is that diesel fuel carries slightly more energy per gallon than gasoline because the molecules it's made from have more energy locking their atoms together (in other words, diesel has a higher energy density than gasoline). Diesel is also a better lubricant than gasoline so a diesel engine will naturally run with less friction.

How is diesel fuel different?

Diesel and gasoline are quite different. You'll know this much if you've ever heard the horror stories of people who've filled up their car or truck with the wrong sort of fuel! Essentially, diesel is a lower-grade, less-refined product of petroleum made from heavier hydrocarbons (molecules built from more carbon and hydrogen atoms). Crude diesel engines that lack sophisticated fuel injection systems can, in theory, run on almost any hydrocarbon fuel—hence the popularity of biodiesel (a type of biofuel made from, among other things, waste vegetable oil). The inventor of the diesel engine, Rudolf Diesel, successfully ran his early engines on peanut oil and thought his engine would do people a favor by freeing them from a dependency on fuels like coal and gasoline, and centralized sources of power. [3] If only he'd known! 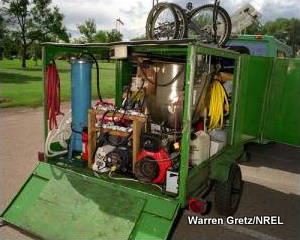 Photo: Have grease will travel: Joshua and Kaia Tickell, a couple of environmentalists, use this trailer (the Green Grease Machine) to make biodiesel fuel for their van (attached to the front) using waste cooking oil thrown out by fast food restaurants. The fuel costs an impressive $0.80 per gallon. Photo by Warren Gretz courtesy of US Department of Energy/National Renewable Energy Laboratory (DOE/NREL).

Advantages and disadvantages of diesel engines

Diesels are the most versatile fuel-burning engines in common use today, found in everything from trains and cranes to bulldozers and submarines. Compared to gasoline engines, they're simpler, more efficient, and more economical. They're also safer, because diesel fuel is less volatile and its vapor less explosive than gasoline. Unlike gasoline engines, they're particularly good for moving large loads at low speeds, so they're ideal for use in freight-hauling ships, trucks, buses, and locomotives. Higher compression means the parts of a diesel engine have to withstand far greater stresses and strains than those in a gasoline engine. That's why diesel engines need to be stronger and heavier and why, for a long time, they were used only to power large vehicles and machines. While this may seem a drawback, it means diesel engines are typically more robust and last a lot longer than gasoline engines. 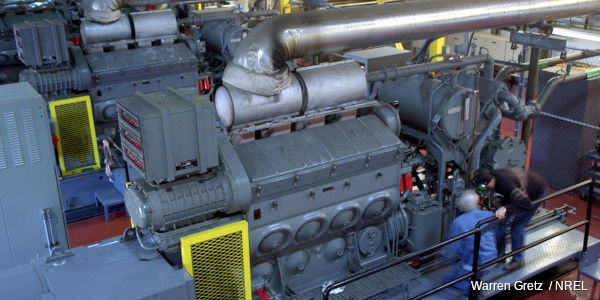 Pollution is one of the biggest drawbacks of diesel engines: they produce a mixture of pollutants, including nitrogen oxides, carbon monoxide, hydrocarbons, and soot particles, which are dirty and hazardous to health. In theory, diesels are more efficient, so they should use less fuel, produce fewer carbon dioxide (CO2) emissions, and contribute less to global warming. In practice, there's some argument over whether that's really true. Some laboratory experiments have shown average diesel emissions are only slightly lower than those from gasoline engines, although manufacturers insist that if similar diesel and gasoline cars are compared, the diesels do indeed come out better. Other recent research suggests that even new diesel cars are highly polluting. The European Environment Agency, for example, notes that even a typical, "clean" diesel car that meets EURO 6 emissions standards produces about 10 times as much nitrogen oxide pollution as a comparable gasoline vehicle. [4] What about CO2 emissions? According to the British Society of Motor Manufacturers and Traders: "Diesel cars have contributed massively to reducing CO2 emissions. Since 2002, buyers choosing diesel have saved almost 3 million tonnes of CO2 from going into the atmosphere." Diesel engines do tend to cost more initially than gasoline engines, though their lower running costs and longer operating life generally offsets that. Even so, car buyers no longer seem convinced: there's been a substantial drop in sales since the Volkswagen emissions scandal in 2015, where the German car maker misrepresented emissions of its diesel cars to make them seem less polluting.

There's no question that diesel engines will continue to power heavy vehicles—trucks, buses, ships, and railroad locomotives all depend on them—but their future in cars and lighter vehicles is becoming increasingly uncertain. The push toward electric cars has provided a powerful impetus to make gasoline engines lighter, more economical, and less polluting, and these improved gas engines undermine some of the perceived advantages of using diesels in cars. In the growing competition between affordable electric vehicles and improved gasoline cars, diesels may find themselves squeezed out altogether. Then again, diesels themselves are constantly evolving; in 2011, the US Department of Energy predicted that future engines could rise in efficiency from today's 40 percent to 60 percent or more. If that happens, diesel could remain a contender in smaller vehicles for many years to come, especially if their sooty emissions can be properly addressed.

Who invented the diesel engine?