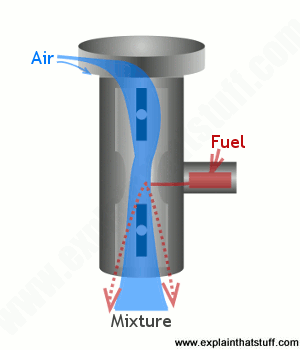 Fuel plus air equals motion—that's the basic science behind most of the vehicles that travel on land, over sea, or through the sky. Cars, trucks, and buses turn fuel into power by mixing it with air and burning it in metal cylinders inside their engines. Exactly how much fuel and air an engine needs varies from moment to moment, depending on how long it's been running, how fast you're going, and a variety of other factors. Modern engines use an electronically controlled system called fuel injection to regulate the fuel-air mixture so it's exactly right from the minute you turn the key to the time you switch the engine off again when you reach your destination. But until these clever gadgets were invented, virtually all engines relied on ingenious air-fuel mixing devices called carburetors (spelled "carburettor" in some countries and often shortened to just "carb"). What are they and how do they work? Let's take a closer look!

Artwork: Carburetors in a nutshell: they add fuel (red) to air (blue) to make a mixture that's just right for burning in the cylinders. Modern car cylinders are fed more efficiently by fuel-injection systems, which use less fuel and make less pollution. But you'll still find carburetors on older car and motorcycle engines, and in the compact engines in lawnmowers and chainsaws.

Engines are mechanical things, but they're chemical things too: they're designed around a chemical reaction called combustion: when you burn fuel in air, you release heat energy and produce carbon dioxide and water as waste products. To burn fuel efficiently, you have to use plenty of air. That applies just as much to a car engine as to a candle, an outdoor campfire, or a coal or wood fire in someone's home.

With a campfire, you never really have to worry about having too much or too little air. With fires burning indoors, air is in shorter supply and far more important. Having too little oxygen will cause an indoor fire (or even a fuel-burning device like a gas central-heating furnace (boiler) to produce dangerous air pollution, including toxic carbon monoxide gas. 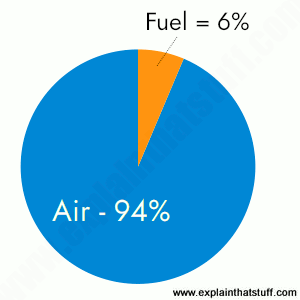 Artwork: In theory, a car engine needs 14.7 times more air than fuel if the air-fuel mixture is to burn properly. This is called a stoichiometric mixture and it works out as 94 percent air and 6 percent fuel. In practice, the ratio may be different.

With a car engine, it's a bit more complex. If you have just enough atoms of oxygen to burn all your atoms of fuel, that's called a stoichiometric mixture. (Stoichiometry is part of chemistry, the chemist's equivalent of making sure you have just enough of each ingredient before you set about cooking from a recipe.) In the case of a car engine, the ratio is usually around 14.7 parts of air to 1 part of fuel (though it does vary depending on exactly what the fuel is made up of). Too much air and not enough fuel means an engine burns "lean," while having too much fuel and not enough air is called burning "rich." Having slightly too much air (a slightly lean mixture) will give better fuel economy, while having slightly too little (a slightly rich mixture) will give better performance. Having far too much air is just as bad as having far too little; both are bad for the engine in different ways.

"The carburetor is called the 'Heart' of the automobile, and it cannot be expected that the engine will act right, give the proper horse-power, or run smoothly if its 'heart' is not performing its functions properly."

What is a carburetor?

Gasoline engines are designed to take in exactly the right amount of air so the fuel burns properly, whether the engine is starting from cold or running hot at top speed. Getting the fuel-air mixture just right is the job of a clever mechanical gadget called a carburetor: a tube that allows air and fuel into the engine through valves, mixing them together in different amounts to suit a wide range of different driving conditions.

You might think "carburetor" is quite a weird word, but it comes from the verb "carburet." That's a chemical term meaning to enrich a gas by combining it with carbon or hydrocarbons. So, technically, a carburetor is a device that saturates air (the gas) with fuel (the hydrocarbon). 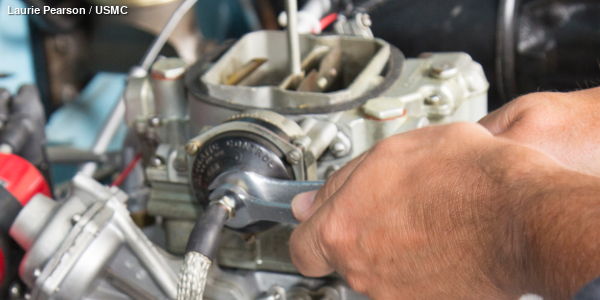 Who invented the carburetor?

Carburetors have been around since the late 19th century when they were first developed by automobile pioneer (and Mercedes founder) Karl Benz (1844–1929). There were earlier attempts at "carbureting" in other ways. For example, the French engine pioneer Joseph Étienne Lenoir (1822–1900) originally used a rotating cylinder with sponges attached that dipped into fuel as they turned around, lifting it out of its container and mixing it into the air as they did so. [1]

The diagram below, which I've colored to make it easier to follow, shows the original Benz carburetor design from 1888; the basic working principle (explained in the box below) remains the same to this day. 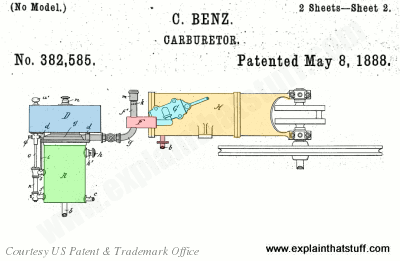 Artwork: A very simplified diagram of Karl Benz's original carburetor from his 1888 patent. Fuel from the tank (blue, D) enters what he called the generator (green, A) underneath, where it evaporates. The fuel vapor passes up through the gray pipe and meets air coming down the same pipe, which enters from the atmosphere through perforations at the top. The air and fuel mix in the red chamber (F), then pass through a valve (turqouise, G) into the cylinder H, where they burn to make power. Artwork from US Patent 382,585: Carburetor by Karl Benz. May 8, 1888, courtesy of US Patent and Trademark Office.

How does a carburetor work? 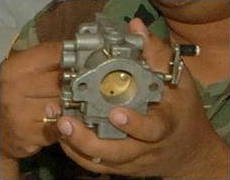 Photo: A typical carburetor isn't much to look at! Photo by David Hoffman courtesy of US Navy and Wikimedia Commons.

Carburetors vary quite a bit in design and complexity. The simplest possible one is essentially a large vertical air pipe above the engine cylinders with a horizontal fuel pipe joined onto one side. As the air flows down the pipe, it has to pass through a narrow kink in the middle, which makes it speed up and causes its pressure to fall. This kinked section is called a venturi. The falling pressure of the air creates a sucking effect that draws air in through the fuel pipe at the side. 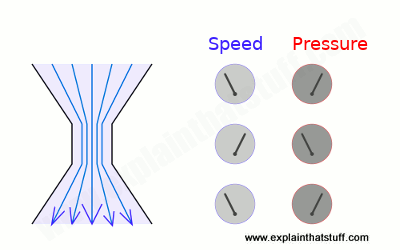 Artwork: The venturi effect: When a fluid flows into a narrower space, its speed increases but its pressure drops. This explains why wind whistles between buildings and why canal boats, drifting parallel to one another, are often pushed together. It's an example of the law of conservation of energy: if the pressure didn't drop, the fluid would be gaining extra energy as it flowed into the narrow section, which would violate one of the most basic laws of physics.

The air flow pulls in fuel to join it, which is just what we need, but how can we adjust the air-fuel mixture? The carburetor has two swiveling valves above and below the venturi. At the top, there's a valve called the choke that regulates how much air can flow in. If the choke is closed, less air flows down through the pipe and the venturi sucks in more fuel, so the engine gets a fuel-rich mixture. That's handy when the engine is cold, first starting up, and running quite slowly. Beneath the venturi, there's a second valve called the throttle. The more the throttle is open, the more air flows through the carburetor and the more fuel it drags in from the pipe to the side. With more fuel and air flowing in, the engine releases more energy and makes more power and the car goes faster. That's why opening the throttle makes a car accelerate: it's the equivalent of blowing on a campfire to supply more oxygen and make it burn more quickly. The throttle is connected to the accelerator pedal in a car or the throttle on the handlebar of a motorcycle.

The fuel inlet to a carburetor is slightly more complex than we've described it so far. Attached to the fuel pipe there's a kind of mini fuel tank called a float-feed chamber (a little tank with a float and valve inside it). As the chamber feeds fuel to the carburetor, the fuel level sinks, and the float falls with it. When the float drops below a certain level, it opens a valve allowing fuel into the chamber to refill it from the main gas tank. Once the chamber is full, the float rises, closes the valve, and the fuel feed switches off again. (The float-feed chamber works a bit like a toilet, with the float effectively doing the same job as the ballcock—the valve that helps a toilet refill with just the right amount of water after you flush. What do car engines and toilets have in common? More than you might have thought!) 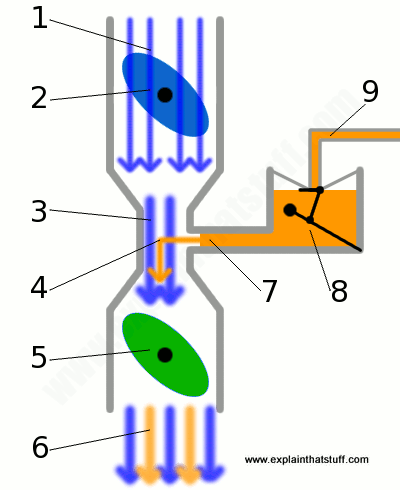 In summary, then, here's how it all works:

For more technical detail, check these out: