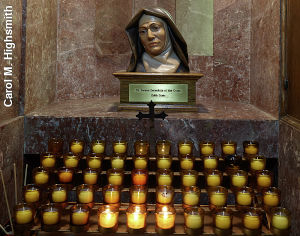 The science of candles

Imagine if there were no electricity and you had to survive up to 12 hours of darkness each night by candlelight! It sounds wonderful in our age of cold, sterile, fluorescent light. But if you had to live that way all the time you'd find it an awful lot of bother, especially if your house had many candles, all burning at once. You'd not only have to keep the wicks burning brightly, you'd also have to ensure they weren't going to tip over and cause a fire. Drawbacks aside, candles will always be a symbol of romance. Look more closely and you'll also find they're classic examples of ingenious technology. Let's take a closer look at how they work!

Photo: Calm candles are universal symbols of peace and devotion—and they're powered by the science of chemistry. Photo from Carol M. Highsmith's America Project in the Carol M. Highsmith Archive, courtesy of Library of Congress Prints and Photographs Division.

How candles use combustion

Candles make light by making heat, so they're crude examples of what we call incandescent lamps (old-fashioned, electric filament lamps, pioneered in the late 19th century by Thomas Edison, are a much more sophisticated version of the same idea). All the light a candle makes comes from a chemical reaction known as combustion in which the wax (made from carbon-based chemicals typically derived from petroleum) reacts with oxygen in the air to make a colorless gas called carbon dioxide. Water is also produced in the form of steam. Since the wax never burns perfectly cleanly, there's also a little smoke produced. The smoke is an aerosol (tiny particles of solid, unburned carbon from the wax mixed in with the steam) and it often leaves a black, carbon deposit on nearby walls or the ceiling above where the candle's burning. The steam is made in the blue part of a candle flame, where the wax burns cleanly with lots of oxygen; the smoke is made in the bright, yellow part of the flame, where there isn't enough oxygen for perfect combustion to take place.

Candles don't burn all by themselves. It takes energy to kick-start the chemical combustion reaction that makes the wax burn. The initial energy you need to start a chemical reaction is called activation energy. You can provide it using a burning match. 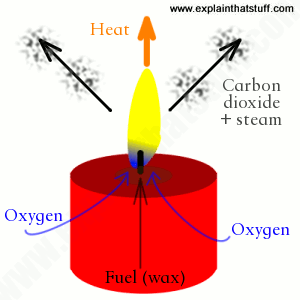 Artwork: How a candle works: A candle is a miniature chemical factory that converts the hydrocarbons (molecules based on the atoms hydrogen and carbon) in wax into carbon dioxide and water (steam) through the chemical reaction we call combustion. Oxygen is pulled in at the bottom, fuel is drawn up the wick, and heat is given off at the top where the hot air rises.

What is candle wax?

You might think wax is just... well, wax, but it's actually quite a tricky thing to define.

Waxes are mainly defined by their physical properties, not their chemical properties. For our purposes, we can think of a wax as a complex mixture of fatty organic chemicals that has waxlike properties:

How a candle wick works

Candles may look simple but they're remarkably ingenious. Set fire to the wick (the little string poking up at the top) and heat travels rapidly downward toward the wax body of the candle beneath. The wax has a low melting point so it instantly turns into a hot liquid and vaporizes, funneling straight up around the wick as though it's rushing up an invisible smokestack (chimney). The wax vapor catches light and burns, sending a flame high above the wick. Heat from the flame travels in three directions at once by processes called conduction, convection, and radiation. Conduction carries heat down the wick to melt more wax at the top of the candlestick (it also carries down into the solid base of the candle, which gets noticeably warm to the touch). Convection draws hot wax vapors out from the wick and sucks oxygen from the surrounding air into the base of the flame. The flame also gives off invisible beams of heat in all directions by radiation. The candle continues to "feed" on the wax underneath it until it's all burned away—until all the potential energy locked away in the wax is converted to heat, light, and chemical waste products.

Which part of a candle flame is the hottest?

Here are some approximate temperatures for the different parts of a candle and its flame. Note that the exact temperatures vary quite a bit depending on all kinds of different factors, notably the type of wax from which the candle is made but also the ambient (air) temperature, and how much oxygen is present. Please don't take these values as absolutely definitive ones that apply in all cases—they're just a rough guide.

Perhaps surprisingly, the brightest part of the flame is not the hottest. The blazing part of the flame gives off three quarters of its energy as light and only a quarter as heat (so you can see a candle is, at best, around 75 percent efficient as a lamp). The hottest parts of a candle flame are actually the blue, almost invisible area near the base, where oxygen is drawn in, and the blue/white part around the edge, where the flame meets the oxygen-rich air all around it. The flame gets progressively cooler as you move in from the outside edge toward the wick. Cooler areas are darker and colored orange, red, or brown. Most of the flame's heat is delivered toward the tip, where a large volume of gas is always burning and convection is sweeping hot gases constantly upwards. If you want to heat something with a candle, hold it near the tip. 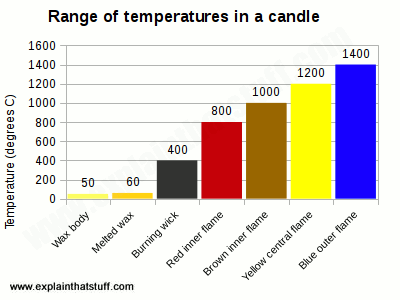 Chart: There's a wide range of temperatures in the relatively small space that a burning candle occupies. What does that tells us? Apart from anything else, it suggests the wax from which a candle is made must be a relatively poor conductor of heat.

Do candles burn in space?

The answer's no, yes, and maybe. "No", because there's no oxygen in space. "Yes", because you can burn candles in a spaceship where there's an artificial supply of air. The answer's "maybe" because candles don't burn in the microgravity of space exactly as they burn back here on Earth. There's no "up" and "down" in space, so there's no "top" or "bottom" of a candle flame either. Convection doesn't draw cooler oxygen in at the bottom and throw hot exhaust gases out at the top, as it does here on Earth, where hotter gases are less dense (weigh less per unit of volume) than cooler ones. In the microgravity of space, with plenty of oxygen, candle flames are more spherical, as this NASA photograph clearly shows: 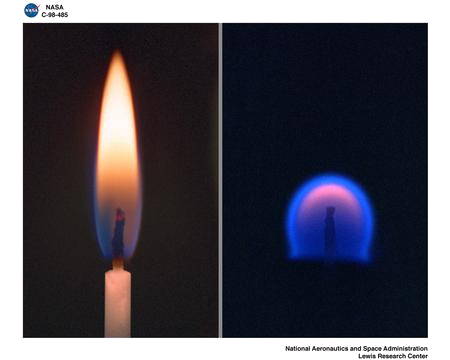 Photo: How much light can you get from a candle? A typical wax candle makes roughly one candela of light, which is also roughly one candlepower (a now-obsolete unit). Modern light bulbs measure the amount of light they produce in units called lumens; an 8W CFL (equivalent to a 40-watt incandescent bulb) produces about 400 lumens. Although there isn't a simple, direct conversion from candelas to lumens (because they measure different things), a decent rule of thumb is that a candle produces about 12 lumens. So you need several dozen candles to make as much light as a typical electric bulb—but clearly it depends on the size of the candle.

Yes, but some make more than others. What you have in a candle is a flame burning a mixture of hydrocarbons in air (oxygen and nitrogen), so, apart from making steam and carbon dioxide, it will also make small amounts of carbon monoxide, nitrogen dioxide, and give off quite a lot of "particulates" (those sooty unburned carbon particles). In one anecdotal study reported by The Times newpaper, a scented candle rapidly produced twice the level of fine particulates (known as PM2.5s) recorded at a bus stop in a busy street in central London. When I carried out my own tests of candle smoke, I found a single candle quickly produced PM2.5 particulates at levels of up to 50μg/m3, which is not far short of the levels you'd breathe in the streets of Hyderabad, India. [1] Air-quality researchers have also found that paraffin-based candles give off toxic chemicals such as benzene (a known carcinogen) and toluene (which has numerous adverse effects if you breathe enough of it); technically these are known as volatile organic compounds (VOCs), because they evaporate readily, and polyaromatic hydrocarbons (PAHs), because of their chemical structure. Scented candles can also produce formaldehyde, another known carcinogen. What matters with air pollution is generally your exposure (how much of a pollutant you breathe in, in total, over a period of time). If you light candles individually and only once in a while, they're not likely to cause enough indoor pollution to worry about; other sources of air pollution, both in your home and outside it, are likely to be far more significant. But if you burn a lot of candles and sit in the smoke for long periods, you might want to think twice.