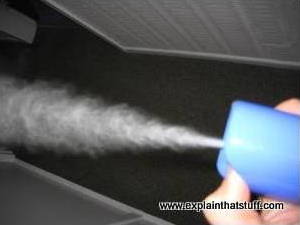 Pssssssssssssst! Everyone loves the convenience of aerosol cans. They make it easy to paint, polish, and lubricate—and lots of other household chemicals, from deodorants and hairsprays to air fresheners and detergents, come in them too. Let's take a quick look at the two main kinds of aerosol dispenser (cans and misters) and find out how they work.

Photo: An aerosol emerging from an aerosol can. Aerosol cans are a simple and convenient way to package all kinds of household chemicals. It's usually a good idea to shake them before you spray them so the chemical you want to release and the propellant (the gas that carries it) are properly mixed together, but carefully read and follow the instructions on the can.

Aerosols aren't aerosols at all.

No, really, let's be clear about this. An aerosol is really the cloud of liquid and gas that comes out of an aerosol can, not the can itself. In fact, to be strictly correct about it, an aerosol is a fine mist of liquid, or lots of solid particles, widely and evenly dispersed throughout a gas. So clouds, fog, and steam from your kettle are all examples of aerosols, because they're made up of water droplets dispersed through a much bigger volume of air. Smoke is an aerosol too, though unlike those other examples (which are liquids dispersed in gases) it's made up of solid particles of unburned carbon (soot) mixed through a cloud of warm, rising air. Even candles make aerosols: the smoky steam swirling above a candle flame consists of soot and water vapor dispersed through hot air. 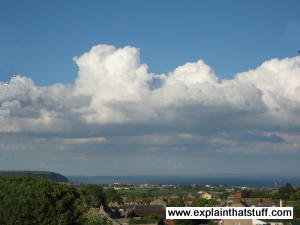 Photo: Aerosols drifting over my home. Clouds are aerosols of water vapor dispersed through air. Interestingly aerosols (naturally created ones such as smoke from forest fires as well as the ones we spray) have interesting and very complex effects on cloud formation. You can read a little bit more about that from NASA.

How do aerosol cans work?

Now you know what an aerosol is, you can see what an aerosol can is all about: it's a mechanism designed to turn a liquid, such as paint or polish, into a finely dispersed mist. So how does it work?

If you've ever read the back of an aerosol can, you'll have noticed messages such as "pressurized container" and "contents stored under pressure." What's that all about? To ensure that something like paint comes out evenly when you press the button on the top of an aerosol can, the manufacturers have to squeeze the contents inside with a pump or compressor (a bit like inflating a bicycle tire). Typically, the contents of an aerosol are stored at 2–8 times normal atmospheric pressure (and usually the lower end of that range). [1] That's why aerosols really rush out when you press their buttons. 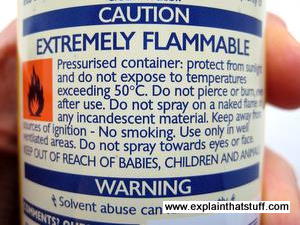 Photo: Many aerosols contain flammable propellants, such as butane or propane. Always read and follow the warnings on the back of the can. Don't point aerosols into your face and don't breathe in the spray.

Why do aerosols feel cold? 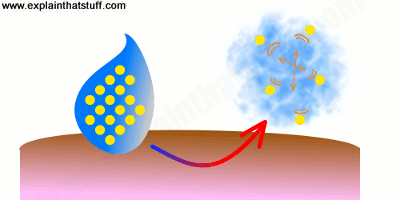 Artwork: Why aerosols feel cold. When you spray liquid droplets on your arm, they quickly evaporate. For a liquid (left) to become a gas (right), its molecules (shown here as yellow dots) have to be pulled apart and separated, which takes energy. That energy is sucked from your arm, making it feel cold.

Evaporation is the main reason why aerosols feel really cold when you spray them on or near your body. In the case of a typical aerosol (such as a deoderant or perfume mister), the contents aren't gases but (usually) volatile liquids (ones that evaporate at everyday temperatures). When they leave the nozzle, they immediately evaporate. The molecules of liquid have to be ripped apart from one another and separated to turn them into a gas, which takes lots of energy (technically known as the heat of vaporization). This energy is sucked into the liquid/gas from its surroundings, causing them to cool. Evaporative cooling also makes aerosol or mister spray feel cold when you blow it on your skin: your body provides the energy that turns the spray from liquid to gas. The pressure inside the can is reduced slightly each time you spray some contents out of it, which means there's some evaporation and cooling going on inside as well as outside, causing the can to cool down too.

Now we can't easily pressurize liquids, so just pumping something like liquid paint into a can isn't going to make an aerosol that works properly. Fortunately, we can pressurize gases very easily. So, in practice, aerosol cans contain two different substances: the liquid product you're interested in releasing (the paint, detergent, hairspray, or whatever it might be) and a pressurized gas called a propellant that helps to push the liquid product into the air and turn it into an aerosol cloud. The propellant gas usually turns into a liquid when it's forced inside the can at high pressure during manufacturing. That makes the propellant and the product mix together (and you can help to ensure they do so by shaking the can before you use it). The propellant turns back to a gas (evaporates) when you push the nozzle and the pressure is released. It disappears into the air leaving behind the product you're really interested in.

Until the 1980s, chlorofluorocarbons (CFCs) were widely used as the propellants in aerosol cans, but they were banned after scientists discovered conclusively that they damaged Earth's ozone layer. [2] (No wonder, really, when you consider that something like 25 billion aerosol cans are used and thrown away each year.) Now other chemicals are used as propellants instead, including the gases propane and butane. Although these gases don't damage the ozone layer, they do have other drawbacks: they can be harmful to inhale and they are highly flammable.

An aerosol can would be entirely useless if there weren't some way of allowing its contents to escape in a very controlled way. That job is done is by the valve at the top of the can—just underneath the button you press—which has a spring to stop it staying permanently open. When you force the button down against the pressure of the spring, the valve opens and reduces the pressure at the top of the can, allowing the contents to escape as an aerosol. Release the button and the spring closes the valve again. 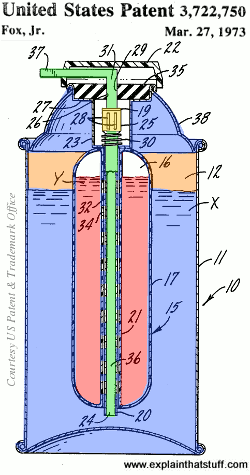 Artwork: Double aerosol: Here's a variation on the classic aerosol: a can that contains two different products in separate containers. One (blue) is held by the outer can while the other (red) is inside a smaller, flexible container in the middle. Both can escape through the central tube (green), released by the usual valve and spring arrangement. You can select to release either the blue product, or the blue and red products together, by rotating the button at the top. This makes holes in the green tube line up with holes in the wall of the inner container, effectively acting like a second valve. Since the inner container is flexible, the same propellant (orange) can force product from both the inner and outer containers up the green tube. From US Patent: 3,722,750: Aerosol can construction by Charles F. Fox, courtesy of US Patent and Trademark Office.

What happens when you press down on the little button?

How are aerosol cans made? 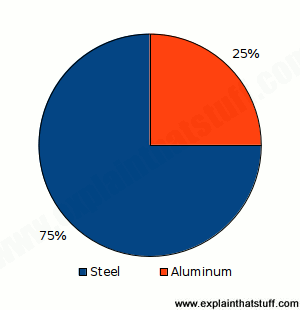 Aerosol cans are made in various ways, normally from metals that can safely contain pressurized liquids and gases. Most everyday, household aerosols are made from a thin sheet of steel coated with another material to stop it rusting or reacting with the product or the propellant. Traditionally the coating is tin, often applied by electroplating, which turns the steel into a material called tinplate. The tinplate is wrapped into a cylinder that has a top and a bottom welded on to ensure the can is completely leakproof. Environmentally friendly cans are increasingly being made with plastic (polymer) linings instead of tin, which is often cheaper and makes them easier to recycle. Other cans are made by pressing a small lump of aluminum through a ring-shaped tool, called a die, so a cylinder forms from a single piece of metal. The product labeling and instructions are placed onto the metal can by offset printing. Some aerosol "cans" are also made from glass—theoretically an ideal material (because it doesn't corrode or otherwise react with the product it's containing), but problematic given that it can break under high pressure or if it's knocked or dropped.

How do misters work? 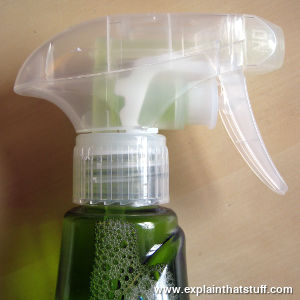 Photo: The pump from a typical household "mister" spray.

Not all household sprays come in cans. Some kitchen products and perfumes come in plastic or glass containers with trigger handles that make an aerosol as you squeeze them back and forth. These sprays (which are called misters or atomisers) work in an entirely different way. 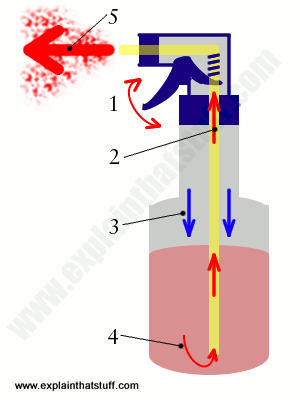 The bottle contains only the liquid ingredient: there's no propellant at all. When you pump the trigger mechanism, you lower the air pressure in the tube running down into the bottle. Because there's air inside the bottle, at the top, the liquid is forced up the tube. The pump mechanism forces some of this liquid out through the tube into a much smaller nozzle, so it turns into a high-speed aerosol of tiny droplets.

The big advantage of misters is that they need no propellant, so they're safer to use. But they generally don't make such a fine or even spray as aerosol cans, so they're less suitable for products such as paint and polish. They also have to be pumped quite hard to get them going, so it can be quite hard to release small amounts of product with them.