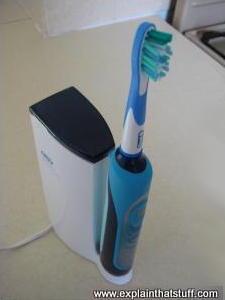 If you've got an electric toothbrush with a plastic bottom, you might have marveled at how it charges up apparently by magic standing on what seems to be a plastic stand! How do two bits of plastic charge up the battery inside your toothbrush when there is no direct metallic contact between them? How on Earth can electricity flow between two plastic insulators?

What's happening here is a neat trick called wireless (induction) charging, and it's the power behind everything from rechargeable toothbrushes and phone charging mats to the latest wireless recharging bays for electric cars. We're about to take a closer look at how it works, but if you don't already know the basics of how ordinary electric transformers work, you might like to take a quick look at our article on transformers before you continue. If you'd like to know about other kinds of chargers, you might prefer to look at our article on battery chargers.

Photo: An electric toothbrush standing on its induction charger. The battery in the brush charges up even though there is no direct electrical contact between the plastic brush and the plastic charger unit in the base. So how does electricity pass through two layers of plastic?

Most of the small electronic appliances we use in our homes work on relatively low voltages—typically 5–10 percent as much voltage as hefty electric appliances like vacuum cleaners and clothes washers. That means we generally need to use transformers to "step down" the domestic voltage so it will safely power electronic gadgets without blowing them up. All those chargers you have (little boxes attached to wires that plug into things like your MP3 player and cellphone) actually have electricity transformers hiding inside. 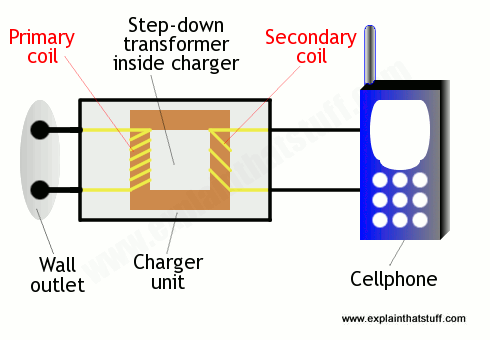 Photo: Ordinary electric charging: all the components of the transformer are contained inside the charger.

So far so good—but what happens with something like an electric toothbrush, which has no power lead to plug into the wall? When you stand the toothbrush on its charger, how does the electricity flow from its plastic-coated base into the battery inside the brush when plastic is an insulator (that is, doesn't allow electricity to flow through it)?

It's not magic we have here—it's just another kind of transformer in a cunning disguise. An electric toothbrush and its charger use a transformer just like a cellphone or an MP3 player, but it's cleverly split into two pieces, with half the transformer in the bottom of the toothbrush and the rest of it in the charger base it stands on: 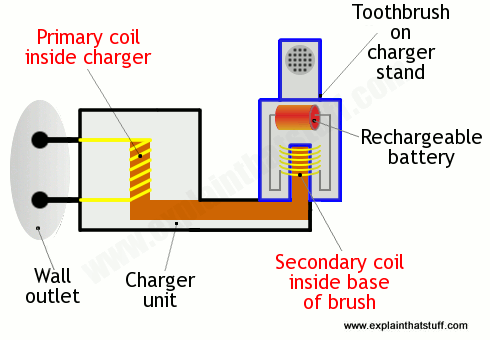 Artwork: Induction charging: half the transformer is in the toothbrush; half is in the stand. 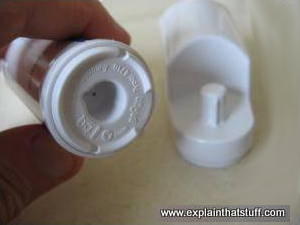 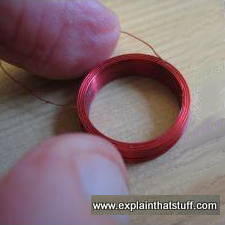 Photo: The bottom of an electric toothbrush has a hole in it so it sits securely on the "peg" on the base—actually the core of the transformer. The copper coil (right) is just above the plastic base, running around the hole.

Photo: The copper charging coil from inside an electric toothbrush. The coil works as the secondary coil of a transformer. It's fitted at the very base of the brush and sits around the little iron peg on the charger stand when the brush is sitting on its base. The two leads from the coil connect to the rechargeable battery inside the toothbrush.

Wireless mat-type chargers (sold under the trademarked brand name Powermat®) are induction chargers too. The mat works as one part of a transformer (essentially like the stand of an electric toothbrush), while the other part of the transformer is either a circuit embedded inside your device (like the coil inside the base of a toothbrush), a pad that clips onto the back on your device, or, for a cellphone, a replacement battery cover with a built-in charging coil that connects to the charging socket. There's no magic involved: it's just electromagnetic induction again! 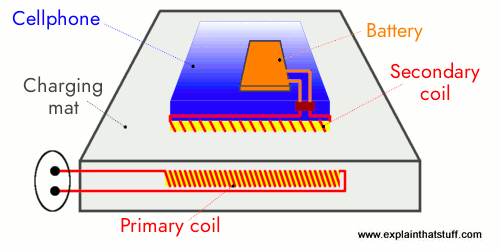 Artwork: A Powermat uses exactly the same principle as an electric toothbrush charger. If you have a cellphone mat charger, it works like this. One part of the charger (the primary coil) is inside the mat. The other part clips onto the back of your phone, usually as a replacement battery cover. This bit contains the other part of the charger (the secondary coil) and connects to your phone's charger port (or the battery's terminals inside the phone).

Cota®, launched by Ossia in 2013, uses a similar wireless principle—indeed, it's described as being like Wi-Fi but transmitting power instead of data using 2.4 GHz radio waves. There's no need for a mat, it can be used alongside other induction charging technologies, and charging can take place at a distance from the transmitter (and even while the receiver in your phone or electric car is moving). 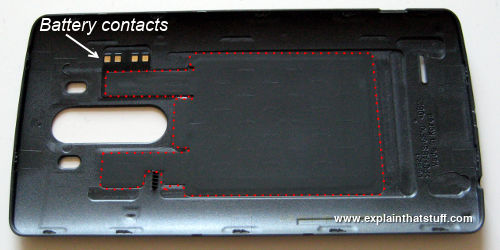 Photo: The wireless charger coil hidden inside the back cover of a phone. Since it's not very visible on this photo, I've highlighted it with red dots. The coil is connected to some copper contacts (top left) that feed the power to the phone's battery.

Although they work efficiently and they're generally more convenient than wired chargers, charging mats still have their drawbacks: you can only charge so many devices at once, for example, and your gadgets have to be sitting right on the mat. WiTricity's rival chargers are slightly different again—and more convenient, inasmuch as they allow charging at a distance of a meter or so (several feet) from the charger. Unlike an ordinary induction charger, a WiTricity charger has a transmitter coil that oscillates at a carefully chosen frequency, sending its power to receiver coils in nearby devices that are tuned so they "resonate" at the same frequency—similar to how radios are tuned, selectively, so they only receive one station from a broadcasting transmitter. That ensures only the "coupled" devices themselves charge up, with minimal effect on other electrical devices nearby. 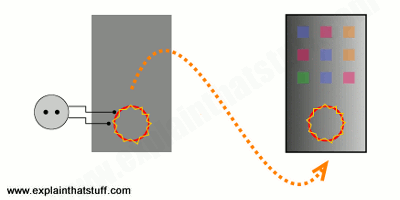 Artwork: In the WiTricity system, a wire-wrapped coil (red and yellow) in the charger (left) produces a magnetic field at a specific frequency. A coil in your cellphone or other appliance (right) is designed to "resonate" at the same frequency. When the two coils are "coupled" in this way, energy is transferred from one to the other, even though they may be some distance apart.

What does the future hold for wireless charging?

Wireless power transmission was originally proposed by Nikola Tesla (1856–1943) toward the end of the 19th century. It's a tribute to Tesla's genius that he anticipated modern systems like Powermat and WiTricity over a century before they were developed.

“My present invention.... consists then in producing at one point an electrical pressure to cause... a current to traverse... the air between the point of generation and a distant point at which the energy is to be received and utilized.” 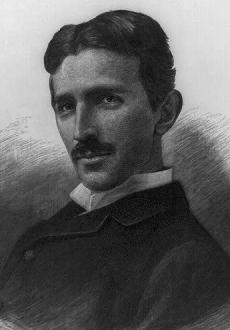 Although you might expect super-convenient wireless chargers to be everywhere by now, arguments over standards and compatibility have seriously hampered their takeup. Powermats, for example, were promoted by a body called Power Matters Alliance (PMA), but there were also two rivals, Wireless Power Consortium (promoting a technology called Qi) and Alliance for Wireless Power (A4P). All very confusing for consumers, to say the least. PMA and A4P eventually merged into a new body called AirFuel Alliance, but that still left two competing systems offering wireless charging: Qi and PMA.

You could see this as part of a wider issue of gadgets and appliances using all kinds of different batteries and generally needing their own, proprietary chargers working off different voltages or currents (a problem that USB chargers have been steadily addressing over the last few years). But it's also an inevitable part of how technology develops through a kind of "survival-of-the-fittest" evolution: the best and most useful technologies thrive; lesser "species" fall by the wayside; and companies are keen to push their own versions of technology from which they can (theoretically) make more money.

One way or another, wireless charging will settle on a single, common standard—and the January 2018 announcement that Powermat had joined the Wireless Power Consortium suggested that would be Qi. The process has being driven by product makers favoring either one standard or the other. Quite a few car manufacturers, for example, now offer wireless charging mats for mobile devices, but while some (such as Cadillac) have been hedging their bets and supporting both Qi and PMA, others (Toyota and Ford) have firmly picked a side—and settled on Qi. In similar vein, while Samsung phones have supported both Qi and PMA for a while, Apple announced it was going to settle on Qi support alone when it released the iPhone 8 and iPhone X, before ditching the project altogether in 2019, citing technical difficulties. Electric cars, increasingly charged from wireless power bays in the street, are also picking sides. Mercedes, for example, has picked Qi. 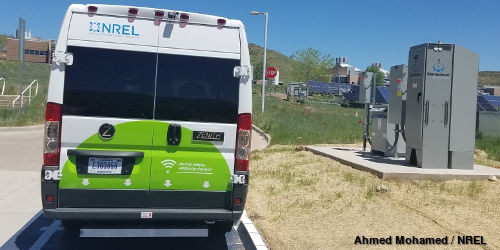 Photo: Wirelessly charging an electric bus. The vehicle is parked on a Momentum Dynamics charging unit powered by the gray transformer on the right. Photo by Ahmed Mohamed, US Department of Energy / National Renewable Energy Laboratory (NREL).

So is this modern war of the (wireless) currents well and truly over? By no means! The arrival of Cota, a wireless-charging system that promises to be as simple and convenient as Wi-Fi, could change everything. In 2019, it gained US Federal Communications Commission (FCC) approval, paving the way for widespread adoption in everyday gadgets like laptops and cellphones. Will Cota finally make wireless charging ubiquitous? According to its developers, quoted by by Inverse in 2020, its ability to charge at relatively long range is key: "Any short range power solution, like Qi, will not suffice to enable such deployment. We believe long range wireless power, like Cota, will be key to the growth of IoT deployment." Another recent entrant is Wi-Charge, which uses line-of-sight infrared beams to charge low-power devices such as phones at distances of up to 10m (30ft). Typical applications might include charging all the phones on a conference table, or all in the gadgets in your living room, from a single, discreet, roof-mounted transmitter unit.

There's much deeper technical detail in patents. Try these for starters:

Cota is a registered trademarks of Ossia Inc.