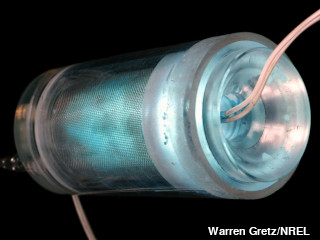 Light is an amazing source of energy—the power behind virtually everything that happens on Earth. Light from the Sun brightens the dark depths of space, makes plants leap to life, and (indirectly) powers our bodies. But did you know it can help to clean things as well? In air purifiers that work using a method called photocatalysis, light energy kick-starts a process that zaps all kinds of nasty air pollutants and turns them into harmless substances instead. For people who suffer from asthma and allergies, light-powered air purifiers like these are another weapon in the fight for cleaner air and better health. Now photocatalysis might sound horribly complicated, but it works in a relatively simple way. Let's take a closer look!

Photo: Designed by US DOE/NREL (National Renewable Energy Laboratory), this photocatalyser unit uses ultraviolet light to help purify the air inside cars, turning harmful volatile compounds (from such things as petroleum and exhaust fumes), bacteria, and viruses into less harmful substances instead. Domestic air purifiers that use photocatalysers in a similar way are made by companies such as Daikin and Zander. Photo by Warren Gretz courtesy of US DOE/NREL (photo id#26315).

What is a catalyst?

You've probably heard of catalysts already—in things like catalytic converters (the exhaust-cleaning systems fitted to cars) and zeolites (rock-like crystals used in all kinds of products and industrial processes). Catalysts are hugely important in industry; there are many types, they work in many different ways, and they're used in the manufacture of almost every chemical product you can think of.

Simply speaking, a catalyst is a substance that makes a chemical reaction more likely to happen by reducing the energy needed to kick start it ("activation energy," as it's known). A catalyst can speed up a chemical reaction or make it happen at a lower temperature. Once the reaction has finished, the catalyst isn't used up, though it may be physically changed in some way. 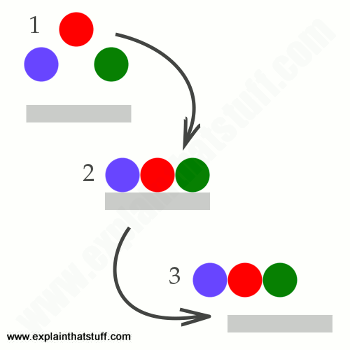 Artwork: A catalyst makes it easier for a chemical reaction to happen. Here's an example of how it can work. 1. Three chemicals (red, green, blue) come together with a catalyst (gray). 2) The catalyst provides a working surface that helps the chemicals join together. 3) At the end of the reaction, the catalyst is chemically the same as it was at the start.

What about photocatalysts? When you see "photo" attached to a word (as in photocopier, photograph, photomultiplier, photoelectric...), you can be pretty sure light is involved: phōtos is the Greek word for "light." Photocatalysis means light is involved in making a catalyst do its job. In other words, light provides the energy that allows the catalyst to work.

How does a PCO photocatalytic air purifier work?

In a nutshell, ultraviolet light shines onto a catalyst, which converts water in the air into a form that turns molecules of pollution into more harmless substances. Here's how... 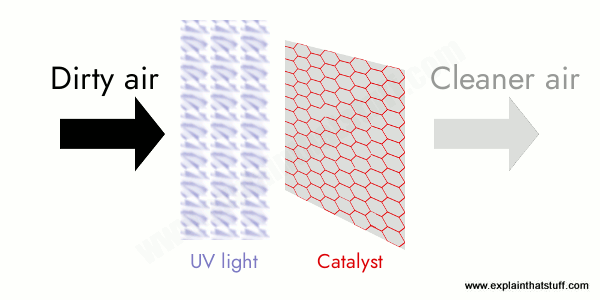 Artwork: The basic concept of photocatalysis: UV light and a catalyst, supported on an aluminum or ceramic honeycomb framework ("substrate"), turn dirty air into cleaner air.

In photocatalytic air purifiers, the catalyst that cleans the air is typically titanium dioxide (sometimes called titania) and it's energized by ultraviolet (UV) light. UV is the short-wavelength light just beyond the blue/violet part of the electromagnetic spectrum that our eyes can detect. The bad thing about it is that it gives you sunburn. The good thing is that it has much more energy than ordinary, visible light—and exactly the right amount of energy to get titanium dioxide excited.

Titanium dioxide is a semiconductor (a bit like materials such as silicon, used in integrated circuits). You don't actually need much titanium dioxide: just a thin film covering the surface of a backing material called a substrate, which is usually made from a ceramic or a piece of metal (such as aluminum).

Here's how the titanium dioxide catalyst in an air purifier breaks apart molecules of air pollution:

Here, then, is the big advantage that photocatalytic air purifiers have over other air-cleaning technologies, such as filters: instead of simply trapping pollutants (which still have to be disposed of somehow), they completely transform the harmful chemicals and effectively destroy them.

“Imagine if, in an effort to clean the air more efficiently, you were involuntarily introducing chemicals more dangerous than the ones you were trying to scrub.”

The disadvantage of this process is that photocatalytic purifiers can also produce tiny amounts of ozone (O3), a chemical variant of the oxygen in the air that is, in itself, a toxic air pollutant. [1] Purifier makers claim the amounts of ozone produced are well within the guideline limit (0.05 parts per million) suggested by the US FDA but, even so, this is something to bear in mind. Although hydroxyl radicals occur naturally in the atmosphere, they can themselves pose dangers. If your indoor air contains volatile organic compounds (VOCs—the easily evaporating chemicals used in things like paints and hairsprays), instead of removing them completely, a photocatalytic air purifier may chemically convert them into other unpleasant pollutants, including formaldehyde and acetaldehyde. [2] All told, there is some debate and uncertainty over whether the pollutants produced by photocatalytic air purifiers could pose a greater risk to human health than the ones they are designed to remove. [3]

Another thing worth noting is that all the interesting stuff happens on the surface of the titanium dioxide catalyst. That's why air purifiers need fans to suck polluted air in at one end and blow clean out out of the other. It's also why air purifiers take some time (typically up to 30 minutes) to clean a large room properly.

A third issue is that the catalysts used in photocatalytic purifiers have a limited lifetime, which significantly reduces their cost-effectiveness. In time, better catalysts with longer lifetimes should solve this problem.

Photocatalysis only tackles certain, chemical forms of air pollution and doesn't solve the problem of particulates (soot and dirt). That's why photocatalytic air purifiers combine UV-activated, titanium-based catalysers with other cleaning and filtering technologies to form a comprehensive system that can tackle a whole range of dirt and pollutants.

A typical purifier draws incoming air past a series of different cleaning stages, each of which tackles a different kind of airborne pollutant: 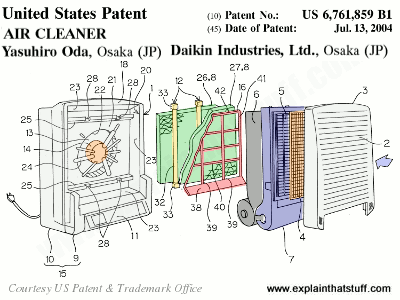 Artwork: An exploded view of a typical Daikin air purifier, which reads from right to left. Air enters on the right (blue arrow) through the front grille (gray, 2). It passes through a coarse prefilter (orange, 4), an ionizer that charges dirty particles (blue 5), and a roll filter (gray, 6). Then it enters the photocatalytic cleaning section in the middle, where there are two honeycomb-shaped photocatalytic surfaces (green) energized by UV lamps (yellow, 12). The back of the machine contains the fan and motor (orange, 13 and 14). Artwork from US Patent: 6,761,859: Air cleaner by Yasuhiro Oda, Daikin Industries, Ltd, courtesy of US Patent and Trademark Office (with colors added for clarity).

If you're looking for a more detailed technical description of real-world air and water purifiers, start here: