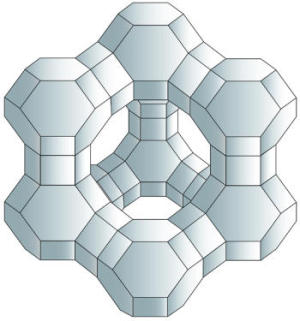 Heat a glass of water and you'll see steam rise off it sooner or later as it comes to the boil. You certainly don't expect the same thing to happen if you heat a rock—unless it's a special kind of rock called a zeolite, which traps water inside it. Back In 1756, Swedish geologist Axel Cronstedt (1722–1765)—best known as the discoverer of nickel—coined the name "zeolite" because it literally means "boiling stone"; today, the term refers to over 200 different minerals that have all kinds of interesting uses, from water softeners and cat litter to animal food and industrial catalysts. What are zeolites and how do they work? Let's take a closer look!

Photo: The power of nothingness: in zeolite crystals, like the one in this illustration, the pores in between the aluminum, silicon, and oxygen atoms are as important as the crystal structure itself. By courtesy of NASA Marshall Space Flight Center (NASA-MSFC).

Zeolites are hydrated aluminosilicate minerals made from interlinked tetrahedra of alumina (AlO4) and silica (SiO4). In simpler words, they're solids with a relatively open, three-dimensional crystal structure built from the elements aluminum, oxygen, and silicon, with alkali or alkaline-Earth metals (such as sodium, potassium, and magnesium) plus water molecules trapped in the gaps between them. Zeolites form with many different crystalline structures, which have large open pores (sometimes referred to as cavities) in a very regular arrangement and roughly the same size as small molecules.

There are about 40 naturally occurring zeolites, forming in both volcanic and sedimentary rocks; according to the US Geological Survey, the most commonly mined forms include chabazite, clinoptilolite, and mordenite. Dozens more artificial, synthetic zeolites (around 150) have been designed for specific purposes, the best known of which are zeolite A (commonly used as a laundry detergent), zeolites X and Y (two different types of faujasites, used for catalytic cracking), and the petroleum catalyst ZSM-5 (a branded name for pentasil-zeolite). 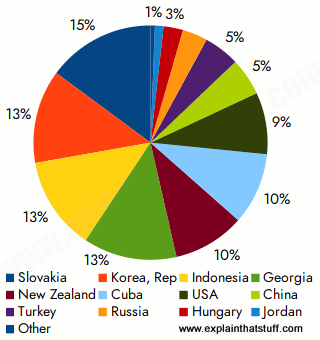 Chart: Where do natural zeolites come from? Estimated world mine production for 2020. China remains the leading producer, accounting for almost a third of all natural zeolites (320,000 tons), but nothing like the 2 million tons that it had previously claimed to produce. Source: US Geological Survey: Mineral Commodity Summaries: Zeolites (Natural), January 2021. According to the USGS, total world reserves of zeolites are unknown "but are estimated to be large."

What special properties do zeolites have?

Zeolites are very stable solids that resist the kinds of environmental conditions that challenge many other materials. High temperatures don't bother them because they have relatively high melting points (over 1000°C), and they don't burn. They also resist high pressures, don't disssolve in water or other inorganic solvents, and don't oxidize in the air. They're not believed to cause health problems through, for example, skin contact or inhalation, though in fibrous form, they may have carcinogenic (cancer-causing) effects. Since they're unreactive and based on naturally occurring minerals, they're not believed to have any harmful environmental impacts. Although zeolites might sound incredibly boring, their stable and unreactive nature isn't what makes them useful.

Animation (above): Ion exchange in zeolites: the zeolite "cage" (gray) traps incoming ions (red and orange) and releases others (yellow) in their place.

The most interesting thing about zeolites is their open, cage-like, "framework" structure and the way it can trap other molecules inside it. This is how water molecules and alkali or alkaline-Earth metal ions (positively charged atoms with too few electrons, sometimes called cations) become a part of zeolite crystals—although they don't necessarily remain there permanently. Zeolites can exchange other positively charged ions for the metal ions originally trapped inside them (technically this is known as cation exchange) and, as Cronstedt found over 250 years ago, they can gain or lose their water molecules very easily too (this is called reversible dehydration). Zeolites have regular openings in them of fixed size, which let small molecules pass straight through but trap larger ones; that's why they're sometimes referred to as molecular sieves. Unlike natural zeolites, which occur in random forms and mixed sizes, synthetic zeolites are manufactured in very precise and uniform sizes (typically from about 1μm to 1mm) to suit a particular application; in other words, they're made a certain size to trap molecules of a certain (smaller) size inside them.

Photo: Synthetic zeolite crystals grown at CAMMP (Center for Advanced Microgravity Materials Processing), a NASA-sponsored Research Partnership Center. The ones on the right are about 10 times bigger (25μm) than the ones on the left (2.5μm). Photo courtesy of Dr. Albert Sacco and NASA Marshall Space Flight Center (NASA-MSFC).

What are zeolites used for? 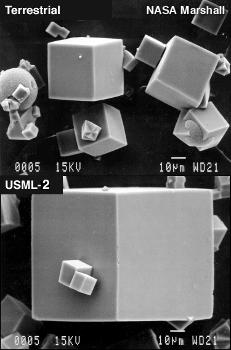 Photo: NASA has been experimenting with using zeolites for storing hydrogen that can be used in fuel cells. The top photo shows zeolites grown on Earth; the bottom one shows similar crystals grown in microgravity in space. Photo by NASA Marshall Space Flight Center courtesy of Internet Archive.

Two other very common, everyday uses of zeolites are in odor control and pet litter; in both, the porous crystalline structure of the zeolites helps by trapping unwanted liquids and odor molecules. This simple idea, so effective in our homes, has much more important uses outside them: zeolites have proved extremely effective at removing radioactive particles from nuclear waste and cleaning up soils contaminated with toxic heavy metals. (Following the Fukushima nuclear disaster in Japan in 2011, rice farmers spread zeolites on their fields in an attempt to trap any lingering radioactive contaminants.) The many other uses for zeolites including concrete production, soil-conditioners, and animal food. 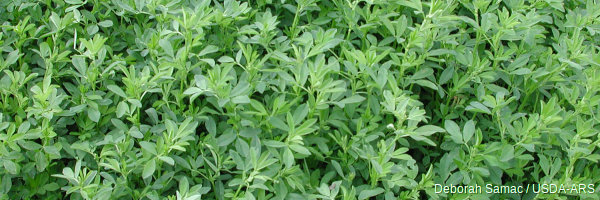 Photo: Scientists at the US Department of Agriculture have found that a coating of zeolite can help to protect the country's valuable, $10 billion-a-year alfalfa crop against soil-borne diseases. Since the zeolite occurs naturally, this treatment counts as organic. Photo by Deborah Samac courtesy of USDA-ARS.

What are zeolite catalysts? 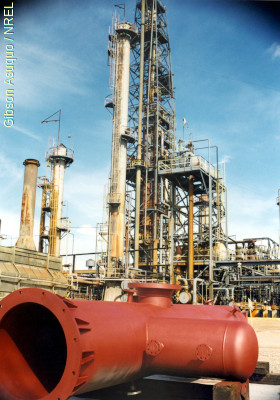 Photo: Zeolite catalysts are used in catalytic crackers like this one, which turn crude oil (petroleum) into dozens of useful everyday products and chemicals. By courtesy of US DOE/NREL (Department of Energy/National Renewable Energy Laboratory).

Another important use for zeolites is as catalysts in drug (pharmaceutical) production and in the petrochemical industry, where they're used in catalytic crackers to break large hydrocarbon molecules into gasoline, diesel, kerosene, waxes and all kinds of other byproducts of petroleum. Again, it's the porous structure of zeolites that proves important. The many pores in a zeolite's open structure are like millions of tiny test tubes where atoms and molecules become trapped and chemical reactions readily take place. Since the pores in a particular zeolite are of a fixed size and shape, zeolite catalysts can work selectively on certain molecules, which is why they're sometimes referred to as shape-selective catalysts (they can select the molecules they work on in other ways beside shape and size, however). Like all catalysts, zeolites are reusable over and over again.