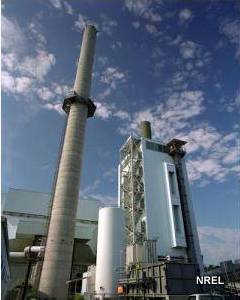 No-one likes smoke. Whether it's rooms full of cigarette fumes or cities choking with pollution, we'd all much prefer to be breathing cool, clean air. But industry is the lifeblood of our economic system and many people assume we have to put up with factory and power-plant smokestacks that choke up the air. In fact, technology has had a pretty good solution to the problem for over a century, in the shape of electrostatic smoke precipitators. Also known as scrubbers, these cunning, static-electric filters snatch the soot and ash from dirty air as it flows along a pipe, greatly reducing pollution and helping to improve the environment. Let's take a closer look at how they work!

Photo: Electrostatic smoke precipitation (ESP) equipment scrubs the waste gases at the McNeil biomass power plant in Burlington, VT. The precipitator is located in the smokestack on the left closest to the camera. Photo by Warren Gretz courtesy of US DOE National Renewable Energy Laboratory (NREL).

A practical use for static electricity 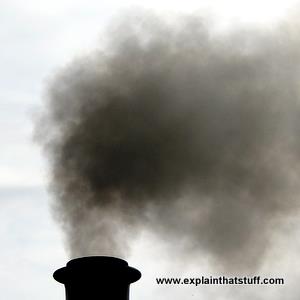 Photo: Smoke is an aerosol of soot particles dispersed in hot, rising air. The "smoke" coming out of a smokestack can contain all kinds of different pollutants, including soot (unburned carbon) and fly ash (fine, dusty residues from burned material), plus polluting gases such as sulfur dioxide and nitrogen oxides.

What does all this have to do with smoke? Smoke might look like a gas but it's actually an aerosol. Most aerosols (such as air fresheners and polishes that come out of aerosol cans) are made of liquid droplets dispersed through gases, but smoke is a bit different: it's a solid dispersed in a gas. Smoke consists of microscopically tiny particles of soot (unburned carbon) dispersed through hot, rising air. Imagine if you could "rub" all the tiny smoke particles as they entered the bottom of a smokestack to give them a tiny electrical charge... and you wrapped something like a sweater round the inside of the smokestack at the top. In theory, the electrically charged smoke particles would cling to the sweater, removing the dirt from the smoke and leaving clean hot air to emerge by itself. Strange as it sounds, that's the basic idea behind electrostatic smoke precipitators!

How an electrostatic smoke precipitator works

Electrostatic smoke precipitators work by forcing dirty flue gas (the gas escaping from a smokestack) past two electrodes (electrical terminals), which take the form of metal wires, bars, or plates inside a pipe or smokestack. The first electrode is charged to a very high negative voltage. As the dirt particles move past it, they pick up a negative charge. Higher up the pipe (or further along, if it's a horizontal pipe), there's a second electrode consisting of metal plates charged to a high positive voltage (50,000–00,000 volts is typical). Since unlike charges attract, the negatively charged soot particles are attracted to the positively charged plates and stick there. From time to time, the collecting plates have to be shaken to empty away the soot; that can be done either manually (by someone brushing them clean) or automatically (by some kind of automated shaking or brushing mechanism in a process called rapping).

Illustration: Electrostatic smoke precipitators use static electricity to remove the soot from smoke. Dirty air moves past negatively charged wires (shown as −ve) so the soot particles pick up a negative charge. The negatively charged particles of soot then stick to positively charged plates (shown as +ve) further along the pipe. Much cleaner air emerges from the pipe as a result. Most precipitators also have simple fabric filters at each end of the pipe (shown by the orange bars) to remove larger soot particles.

Electrostatic smoke precipitators all work in essentially this way, with dirt particles gaining an electric charge from one wire or plate before being attracted to a second wire or plate with the opposite electric charge for collection and disposal. Even so, there are many variations, with ESP equipment designed to work in different ways for different-sized dirt particles made from different chemicals and different amounts of pollution (different flue-gas flow rates). The coal burned in power plants around the world varies substantially in its chemical composition and the designers of ESP equipment have to take this into account. Some power plants try to minimize sulfur dioxide pollution (which causes acid rain) by burning low-sulfur coal that typically produces more ash. Since the coal is less calorific (energy-containing), you need to burn more of it to make the same amount of energy, which means more ash again. Low-sulfur coal produces a different kind of ash that has a higher electrical resistivity. This makes ESP equipment less effective so, to achieve the same reduction in pollution, it generally has to be scaled-up in size to compensate. The effectiveness of ESP is also affected by the temperature and moisture content of the flue gas (low-sulfur coal burns at a lower-temperature and often contains more moisture). ESP isn't 100 percent effective and some pollution will always remain behind. In some states and regions, the air pollution laws are stricter than in others, and that might mean that a power plant needs larger plates (or multiple sets of them) to ensure the gas emerging from a smokestack is cleaner. 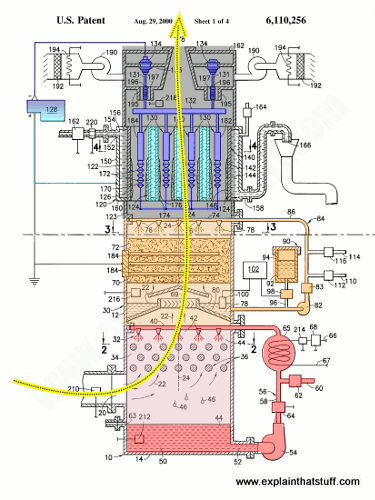 Artwork: Flue gas can be a complex mixture of different polluting gases and soot-type particulates; cleaning it thoroughly involves several separate processes and a different set of equipment for each. In this example, the dirty gas (yellow) enters at the bottom and passes through a wet scrubber (red section), essentially a shower of water that removes the large-scale particulates. The remaining gas flows through a neutralizer (orange section), which uses chemical reactions to remove gases such as sulfur dioxide or hydrogen chloride. Once the large particulates and corrosive gases have gone, the gas passes through an electrostatic precipator (blue/gray section), where two sets of high-voltage electrodes (dark and light blue) remove the finer particulates. These are continually flushed away by dripping moisture in a process called condensing wet precipitation. Artwork from US Patent 6,110,256: Apparatus and method for removing particulates and corrosive gases from a gas stream by Philip E. Reynolds et al, Croll Reynolds Clean Air Technologies, August 29, 2000, courtesy of US Patent and Trademark Office. 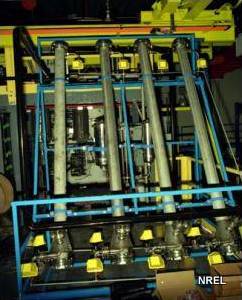 All sorts of other factors affect the design of ESP equipment. For example, if you want to scrub out very large amounts of dust or dirt, you need to focus not just on removing pollution from the air but on how you'll continually remove large amounts of dirt from the scrubber with an automated rapping mechanism (motorized steel brushes, vibrating hammers, and some kind of hopper underneath). If the air you're scrubbing contains more than one type of pollutant, as it does if it's the flue-gas from a power plant, ESP might be only one stage of a multi-stage scrubbing process including other steps such as catalytic cleaning (used to remove nitrogen oxides) and wet flue-gas desulfurization (WFGD, used to remove sulfur dioxide). If you're running a mineral processing plant, maybe the pollutant you're worried about is quite valuable and it might pay you to capture it and recycle it, so you'll need to design some automated way of doing this.

The point is that while electrostatic smoke precipitation is a general technology, every place where it's used has unique features and problems, and equipment needs to be designed with these in mind if it's going to be effective at keeping air pollution to a minimum.

How effective are they?

As air pollution controls have become increasingly stringent, so smoke precipitator technology has had to evolve to keep pace. State-of-the-art precipitators remove well over 99 percent of the particulates in flue gas moving at a typical speeds of 20cm (6–7in) per second or so. 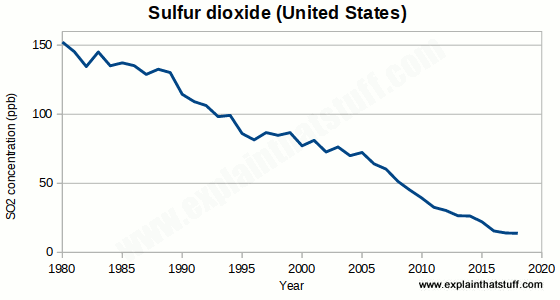 Chart: Though air pollution remains a major global problem, technologies such as flue-gas desulfurization can take some of the credit for cleaning up gases like sulfur dioxide. Emissions of this gas have fallen dramatically in countries like the UK and US, which were the first to industrialize. Chart drawn using data from the US Environmental Protection Agency.

According to the Archives of the Research Corporation for Science Advancement [PDF], we owe the basic idea of electrostatic precipitation to Dr Frederick Cottrell (1877–1948), who carried out the earliest experiments with the technology in 1906. In US Patent 895,729: Art of separating suspended particles from gaseous bodies, filed in 1907, Cottrell described how high-voltage electrodes could be used to clean all kinds of factory fumes and dust. Intriguingly, he also suggested the same basic technology could be used for "the problem of destroying fog and mists in the open air, both on land and water". The same year, he formed the International Precipitation Company to license his invention to other companies, including Western Precipitation of California. The first large-scale precipitator was a dust-busting device built by Western Precipitation for the Riverside Cement Company in 1911. Cottrell later worked with British electricity pioneer Dr Oliver Lodge and German Dr Erwin Moeller to develop and market the technology worldwide. 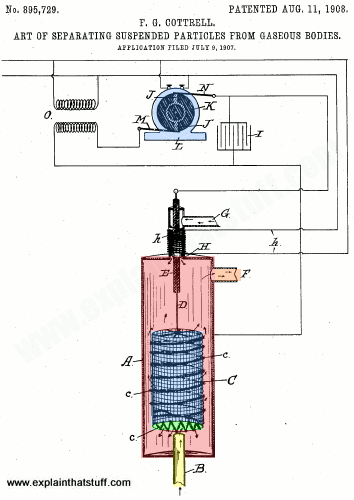 Artwork: In Cottrell's original 1907 design, dirty smoke enters the scrubber through the yellow pipe at the bottom. It flows past a wire cage (darker blue) charged to a high voltage by the transformer and switching unit at the top (lighter blue). In this design, the case of the scrubber acts as the second electrode. Most of the soot precipitates out on asbestos filaments at the bottom of the cage (green) and drops to the bottom, where it can be easily removed. Meanwhile, the cleaner smoke exits through the orange pipe on the top right. Artwork courtesy of US Patent and Trademark office.

For a much more detailed technical account, check out these patents. There are many more covering precipitation technology (quite a few were filed in the late 1920s and early 1930s).