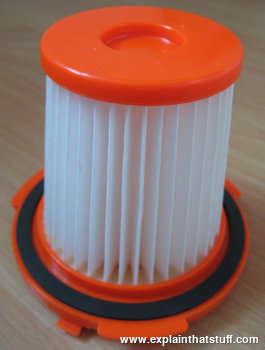 We tend to think of air pollution as something that happens outside—but that's not always the case. Even inside your home, there are things like dust mites and dirt trodden in from outdoors to worry about. Indoor air pollution from sources like this can irritate your lungs and contribute to allergies and asthma. The trouble is, if you use an ordinary vacuum cleaner, you might simply be "rearranging the dirt": your cleaner will trap some of the dust inside the bag or cyclone filter but let the rest pass straight back into the room. If you suffer from asthma or another breathing difficulty, you may find a HEPA (sometimes defined as "high-efficiency particulate air," sometimes as "high-energy particulate arresting") air purifier (or a vacuum with a HEPA filter) well worth the investment. Let's take a look at how they work.

Photo: A typical HEPA filter from a household vacuum cleaner. You can see the white, paper-like, fiber material folded and wrapped around like a concertina under the orange plastic top and bottom case. The folding greatly increases the area of the filter in contact with the airstream—effectively improving the filtration without reducing the airflow.

How HEPA filters work to trap dust and dirt 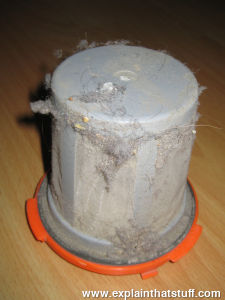 The simplest kind of filter is a sieve: something with holes that are big enough to trap some particles and small enough to let others through. Some vacuum cleaners do use filters like this to stop bigger particles of dust and dirt—but how do you catch smaller dirt particles as well? You could make a very fine filter or you could put several filters on top of one another, but in a vacuum cleaner they would clog up very quickly and stop the machine from working. Not only that, you'd need a more powerful electric motor to pull the air through the machine, and it would use more energy and cost more to run.

HEPA filters in vacuum cleaners tend to use two quite different mechanisms to clean the airstream. First, there are one or more outer filters that work like sieves to stop the larger particles of dirt, dust, and hair. Inside those filters, there is a concertina of what looks like folded paper designed to trap the smaller particles. The paper is actually a mat of very dense glass fibers and, unlike the gauze, it doesn't simply filter out small dust particles like a sieve. Instead, it uses three different mechanisms to catch dust particles as they pass through in the moving airstream. At high air speeds, some particles are caught and trapped as they smash directly into the fibers, while others snag on the fibers as they try to brush by. At lower air speeds, dust particles tend to wander about more randomly through the filter (a process known as Brownian motion after its discoverer, Scottish botanist Robert Brown) and may stick to its fibers as they do so. Together, these three mechanisms allow HEPA filters to catch particles that are both larger and smaller than a certain target size.

Artwork: The fibers in HEPA filters (shown here as gray bars) trap dust and dirt particles in three ways. Some particles crash into filter fibers and are absorbed by impact. Some are caught as they flow along in the moving airstream, move too close to a fiber and are trapped by interception. At lower air speeds, some are trapped by diffusion (when randomly moving dust and air particles crash into one another and some are pushed into the filter fibers).

As we'll see in a moment, HEPA was originally developed by nuclear scientists to help clean up dangerous, radioactive particles. Fortunately, most of us don't have to deal with such things—but HEPA filtration is still very useful and important in factories and workplaces, especially in environments where dust is produced as part of the manufacturing process.

According to NIOSH (the US National Institute for Occupational Safety and Health), a true HEPA filter is one that can trap 99.97 percent of dust particles that are 0.3 microns in diameter (where a micron is one millionth of a meter). There's nothing particularly significant about particles 0.3 microns in diameter: they are simply the ones most likely to get through the filter, and smaller and larger particles than this are trapped even more effectively.

That might sound a bit confusing, so let's just unpack what it means. First, and most importantly, it does not mean that HEPA filters can't trap things smaller than 0.3 microns. Remember that HEPA filters aren't mechanical sieves: they're removing particles by a combination of three different trapping mechanisms. Diffusion, one of these mechanisms, is particularly effective with very small particles, while larger particles are more likely to be trapped by impact and interception. So relatively small and relatively large particles are both efficiently trapped in different ways, while particles in the middle (say, 0.3 microns) are less effectively trapped by any of the mechanisms and more likely to zip straight through. That's where the 0.3 micron measurement comes in. It's really saying "even when we consider the least well-filtered particles," some 99.97 percent are still captured. [1]

To put 0.3 microns in perspective, it's worth remembering that a typical human hair is roughly 50–150 microns in diameter, so a HEPA filter is trapping dust several hundred times thinner. The coarse, sooty particulates that spew from diesel car exhausts are generally described as PM10 (particles less than 10 microns) or PM2.5 (less than 2.5 microns), so you can see that HEPA filters are working at a scale at least 10 times smaller. A genuine HEPA filter is much more hygienic than an ordinary one because it will stop mold spores and even some bacteria and viruses. It's cleaning at the microscopic—and indeed nanoscopic—scale. By comparison, the fibers in a HEPA filter are roughly 0.002–0.5 microns (2–500 nanometers, nm) in diameter. [1]

When it comes to filters used in respiratory equipment, NIOSH recognizes nine different grades, based on three different levels of efficiency (95, 99, and 99.97 percent) and three levels of resistance to filter degradation (N, R, and P). N means not resistant to oil, R is oil resistant, and P is oil proof. So you might see a filter labeled N95 (95 percent efficient and not resistant to oil) or P100 (99.97 percent efficient and oil proof).

You might also see HEPA filters classified using the five letters A through E, based on how well they capture particles and resist airflow. Type A are the least effective that still meet the basic criteria for HEPA, while type E (at the opposite end of the scale) are military grade filters capable of coping with chemical, radiological, or biological particles. There's also a classification based on whether filters are fire resistant (type 1) or semi-combustible (type 2). 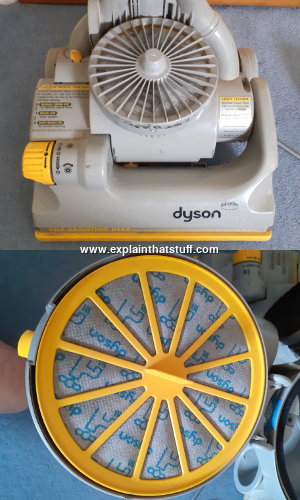 Photo: The two HEPA filters in a Dyson vacuum cleaner (one above and one below the dirt cylinder) help to stop dust returning to the room.

Things to consider before buying

Even if you're an allergy sufferer, these sorts of classification probably aren't going to be relevant if all you're doing is buying a simple air purifier or vacuum cleaner. For most people, the key thing is to make sure what you're buying has genuine HEPA filtration (remember, that's 99.97 percent of particles at 0.3 microns—often described as "true HEPA" or "absolute HEPA") by checking the particulate size quoted by the manufacturer. Avoid manufacturers who make vague, meaningless descriptions like "HEPA-like" and "HEPA-type" that aren't quantified in any way. A true HEPA filter will always quote the numbers. Some professional-grade vacuums will have extra mechanisms for dealing with tiny particles, such as activated carbon granules (similar to those in water filters). Finally, if you need industrial-strength air cleaning, there's a tougher standard called ULPA (Ultra-Low Penetration Air) that can catch 99.99 percent of particles 0.12 microns and above. However, the relationship between ULPA and HEPA can be confusing: it's worth noting that "a simple HEPA-rated filter will perform as an ULPA-rated or better filter" if the air flow rate is low enough. [1]

Knowing a bit about how filters work comes in handy when you're deciding what to buy. A vacuum with proper HEPA filtration will channel virtually all (over 90 percent) of the dirty airstream through the filter; if it doesn't do this, it's simply rearranging the dirt. HEPA filters obstruct the airstream in vacuum cleaners: it takes quite a lot of suction to pull air past all those convoluted fibers. That's why vacuums with true HEPA filtration need more powerful motors and ones with low power may not clean effectively. Air purifiers that use HEPA filtration may have higher power consumption for the same reason (which means they're more expensive to run for long periods and noisier than rival technologies, such as photocatalysis, that work in different ways). A HEPA filter will also need cleaning or replacing periodically as well (which will add to the running costs); you might want to check how much replacement filters cost before you commit yourself.

Like many other inventions, HEPA filters developed over time: there doesn't appear to be a single inventor who deserves sole credit. 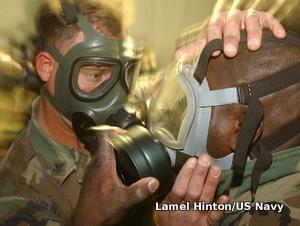 Photo: Air filters in gas masks: HEPA filters were originally developed in the 1940s for military use—and they remain an important line of defense against protection against chemical, biological, and radiological warfare to this day. Photo by Lamel J. Hinton courtesy of US Navy and Wikimedia Commons.

The ancestors of modern HEPA filters were folded paper filters developed by companies such as Kimberley Clark (makers of Kleenex tissues) to protect soldiers from gas attacks during World War I. In World War II, much more sophisticated fiber-based air filters were developed by military scientists on both sides. German scientists seem to have invented the basic technology, which was captured and further developed by Allied rivals, notably during the Manhattan Project (the scientific effort that produced the world's first atomic bomb) as a way of trapping extremely dangerous, tiny radioactive particles. These filters used different combinations of fibrous materials, including cellulose, asbestos, viscose, glass, and different types of paper, which were pleated, folded, and separated in various ways. [2] The Manhattan connection explains why, for a long time, according to Melvin First of the Harvard School of Public Health: "Everything about these filters was classified 'secret' during WWII and for a number of years after the end of the war." The technology was eventually declassified in the early 1950s. Some of the wartime research (and the theory of how HEPA filters work) was carried out by Nobel-Prize-winning chemist Irving Langmuir. [3]

Germany, which pioneered military HEPA technology in the war, continued to play a part in its peace-time evolution. In the post-war years, German brothers Klaus and Manfred Hammes began developing relatively inexpensive, home-air filtering systems during the early 1960s to reduce soot particles produced by coal-fired stoves. Over in the United States, the first inexpensive, pleated air filter was patented on April 19, 1966 by Kenneth W. De Baun and you can read all about it in his US Patent 3,246,457: Pleated Air Filter Cartridge. 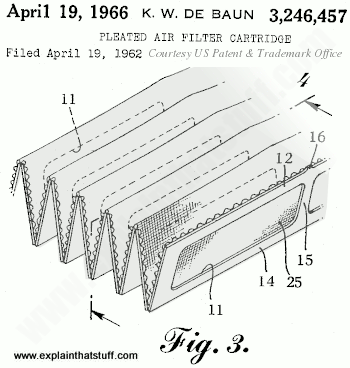 Artwork: Kenneth De Baun's pleated HEPA filter from the 1960s. Artwork from US Patent 3,246,457 courtesy of US Patent and Trademark Office.

These are just a few examples of many patented inventions that feature HEPA filters: