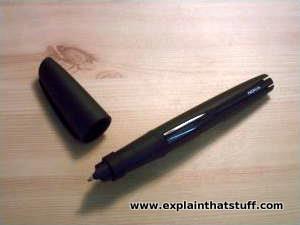 Has there ever been a more amazing invention than the pen—an incredibly convenient way of recording information that dates back thousands of years? The only trouble is, pens and paper are not very compatible with the digital technology that surrounds us in the modern world. It's all very well scribbling little notes to yourself as you sit on the train, but what if you need to put that information into your computer when you get home? Until recently, your only option would have been to read back your notes and type in the information (that is, write it out all over again)—but now there's a better solution: the digital pen. Digital pens look like fatter versions of ordinary pens. Packed with electronic circuits, optical devices, and Bluetooth® gizmos, they can record the things you write as you write them and transmit them automatically to your computer using wireless technology. Sounds amazing doesn't it, so how exactly does it all work?

Photo: A Nokia SU-27W digital pen. It's about four times fatter than a fountain pen, a little bit longer, but not all that much heavier. This one is no longer available, but there are plenty of similar ones on the market.

Chances are you already own something quite like a digital pen. If you have an optical mouse (one that works by shining light onto your desk instead of using a heavy, rolling, rubber ball), you're already using most of the technology that a digital pen uses. If you lift up an optical mouse, you'll see there are two optical components underneath: one that shines red light down onto your desk and another one that detects the light as it bounces back up again. The light is produced by a light-emitting diode (LED); right next to it, there's a photoelectric cell—a component that detects the reflected LED light and turns it back into an electrical signal. As you move your mouse around, the pattern of red light reflected off the desk changes from one moment to the next and the circuits inside the mouse use this to figure out exactly how you're moving your hand.

Now, clearly, you could write words with your optical mouse if you wanted to and they would appear on your computer screen—but they'd appear as big, fat, smudgy images not as clearly discernible words: your computer would have no idea what you'd actually written and it would be impossible to import your scribbles into a word-processor to edit them. 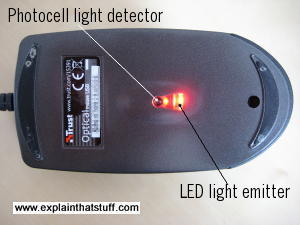 Photo: An optical computer mouse has much in common with a digital pen. Turn it over and you can see the light that shines onto your desk and the photocell that picks up its reflection.

What's different about a digital pen?

If you look inside a digital pen, you'll find most of the same components that are in an optical mouse. The difference is that they're stacked vertically rather than horizontally: a digital pen is to an optical mouse what a skyscraper is to a parking lot. Where an optical mouse tracks your hand movements by reflecting light off your desktop, a digital pen does the same thing much more precisely by following an almost invisible pattern of lines or pinpoints (depending on which system you use) on special paper.

A mouse doesn't keep a track of what you do, but a digital pen does: it tracks its progress across the paper as you move it around and, in this way, captures what you write. So that you can see exactly what you're doing, a digital pen also has a conventional refill that leaves an ink trail, just like a normal pen. The ink trail is purely for your convenience: the computer doesn't "see" it or use it in any way. Every so often, you need to upload your writing to your computer. Some digital pens upload when you plug them into a computer with a USB cable, others upload through a docking station that also charges the battery in the pen, while the most sophisticated ones can also transmit words as you write them using a wireless technology such as infrared or Bluetooth

How a digital pen works

Move your digital pen across the special paper and this is what happens: 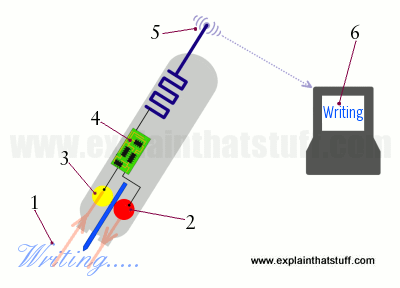 What can you use digital pens for?

It's a bit of a misnomer to call these digital "pens," since they're essentially just text scanners and don't actually write anything; you'll sometimes see them described as "pen scanners" or "OCR pens." Some are battery powered and have onboard flash memories to store things you scan as you're out and about; you simply upload what you've scanned when you get back to your computer. Others have long USB cables, so they work exactly like conventional scanners but are a bit more portable, if you hook them up to a laptop.

More sophisticated digital pens are designed to capture your handwriting. Now, if you're a fan of old-style technology, particularly classic technology like the pen and paper, digital pens might seem completely frivolous—but just consider for a moment how useful they could be in certain situations. If you're a student taking notes in classes or lectures, imagine how brilliant it would be to get back to your room, immediately upload all your notes to your computer and instantly print them out in neat, typed form. Or, if you're a physician (doctor), wouldn't it be handy if all the notes you scribbled about a patient during an examination could be instantly uploaded onto their records as soon as they left your consulting room? 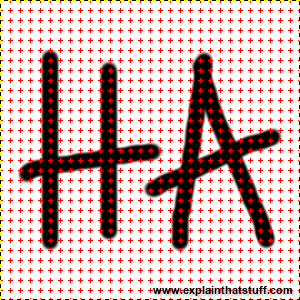 Artwork: Some digital pens read writing with help from an almost invisible grid of tracking marks. In practice, the grid uses a more irregular pattern and is less visible than this.

Digital pens have some pretty cunning new uses as well. The company that devised much of the technology behind the latest generation of pens, Anoto, envisages them as a super-convenient way of ordering information from websites. Their brainwave was not to produce better digital pens but to reinvent paper so that it's overlaid with an extraordinarily complex, almost invisible pattern that's easy to vary for different purposes. So, for example, an election voting paper would have a different pattern from a mail-order catalog ordering form, and a mail-order form printed by Sears would be different to one printed by Macy's.

Imagine if you wanted to order a Chinese take-away through a website. It can be quite irritating to have to switch on your computer, wait for it to boot up, go online, fill in one of those lengthy forms, enter all your payment details, and finally wait for your food to arrive. It's so much quicker to do that by phone or on paper. So Anoto's idea is that takeaways (and other companies using online ordering) would print their catalogs or menus with their own unique version of its specially coded paper. People could then tick the things they wanted with their digital pens. Because of the unique pattern, the pen would instantly know which company website the form referred to and send the orders through to the correct place in a fraction of the time. 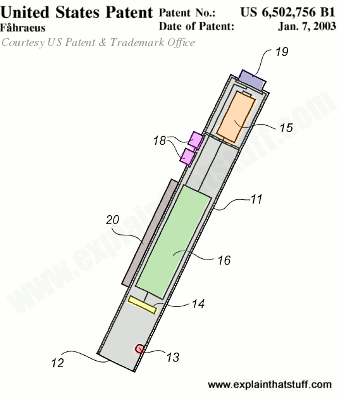 Photo: Anoto's digital pen (shown here in their original patent illustration) looks very much like the Nokia one I've taken apart in this article. Using their numbering (but with my colors added for clarity): 11 (gray) is the pen casing; 12 is the opening at the bottom of the pen through which light fires down at the paper and back up again; 13 (red) is an LED; 14 (yellow) is a light sensor (either a CCD or CMOS sensor); 16 (green) is the main circuit board; 20 (brown) is a digital display; 18 (purple) are buttons for switching the pen on and off or controlling simple menu functions; 15 (orange) is the battery; 19 (blue) is the wireless transmitter. Artwork from US Patent 6,502,756: Recording of information by Christer Fåhraeus, Anoto Ab, 7 January 2003, courtesy of US Patent and Trademark Office.

Will digital pens ever catch on?

When I first wrote this article, back in 2008, Anoto was still quite a new technology, and I commented: "Given that it marries the simplicity and convenience of pens with the power of computers, it could have a very promising future." Further back, in 2002, Wired magazine had noted that "some observers believe digital pens will make traditional writing on paper obsolete by 2020."

Looking back now, it's well over a decade since Anoto was granted its patents and the system is still relatively uncommon. The year 2020, by whuch paper was supposed to become obsolete, has long since been and gone. Smartphones with intuitively easy-to-use touchscreens that automatically know where they are, faster mobile networks, and very usable apps have combined to make online ordering much quicker and simpler than ever before. Most of us own a smartphone and order from it all the time; how many of us own a digital pen or have ever seen digital paper? Meanwhile, bigger-screen tablets and phablets have come along, replacing paper notebooks altogether for many people. If you're happy writing notes straight on your tablet, why bother with digital paper at all? Handwriting apps like INKredible can replicate much of the elegance of real-world handwriting, even when you write with your finger. Did Anoto, obsessed with finding markets for a very clever digital pen-and-paper system, simply fail to understand how touchscreens would come to dominate the world? Was it way ahead of its time? Or a flawed idea whose time would never come? 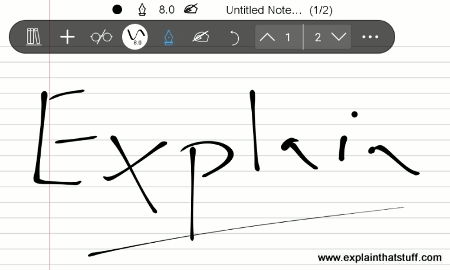 Photo: Apps like INKredible try to replicate the elegance of handwriting on your phone or tablet screen. Unfortunately, the more elegantly you write, the harder it will be to convert your writing into editable text.

The digital pen makers don't give up easily! Livescribe (bought by Anoto in 2015) is also targeting the corporate market, while Leapfrog packages similar technology in a colorfully chunky pen designed to help children learn to read. The latest generation of handwriting pens (like the Neo Smartpen, Moleskin+ Pen, Montblanc StarWalker, and Livescribe) are specifically geared for use with smartphones and come with their own dedicated iOS and Android apps. All these systems are based on coded paper.

Meanwhile, Microsoft has been taking a slightly different tack, quietly reinventing digital pens as faster, more intuitive interfaces to its Surface range of touchscreen laptops and tablets. Instead of worrying about the nitty gritty of data collection and processing, or figuring out how to get marks made on paper into digital devices, Microsoft's Surface Pens focus squarely on maximum usability by replicating the responsiveness and familiarity of ordinary pens and pencils. So you can tilt them for different effects and shade with them, just like you can with a pencil, and the "ink" appears on the screen immediately, just as ink appears from a ballpoint, and not lagging slightly behind your movements, as it often does with earlier, clumsier digital pens.

What's inside a digital pen? 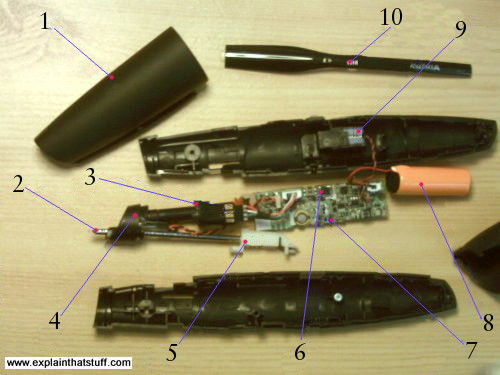 Take a Nokia digital pen apart and this is what you'll find: 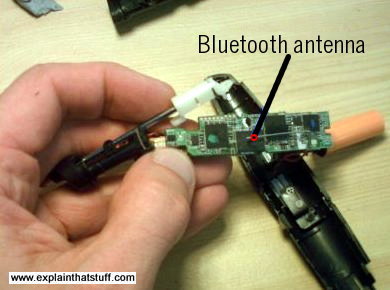 Photo: Antenna: Look at the back of the circuit board and you'll see the tiny little Bluetooth antenna (aerial) that transmits your words to your computer. It's a little bit thicker than a pin. There are some more chips round the back too.