Want to know how fast your car's going? It's easy—just glance at the speedometer! Speed is a handy measurement that tells you how quickly you can get from one place to another. A car's top speed is generally a good indication of how powerful an engine it has, but assuming everyone stays within the speed limit, maximum speeds are just numbers on paper—little or no use to anyone.

Acceleration is much more interesting than speed and more useful if you need to get out of danger behind the wheel: it's how quickly something can speed up or slow down. Measuring acceleration is a bit more tricky than measuring speed because it involves figuring out how speed changes over a period of time. How do you measure acceleration? Not surprisingly, with a device called an accelerometer. Once upon a time you'd have found gadgets like this only in space rockets or jumbo jets; now they're in virtually every car, many laptop computers, and all kinds of gadgets such as iPods, iPhones, and the Nintendo Wii. Let's take a closer look at what they are, what they do, and how they work!

Photo: This way up! How does your cellphone know which direction to rotate the display? It's all done with accelerometers hidden inside the case.

What are accelerometers used for? 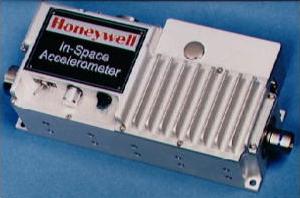 Photo: The appliance of rocket science? An accelerometer developed by Honeywell in the 1980s for use on the space shuttle. Photo by courtesy of NASA Johnson Space Center (NASA-JSC).

Accelerometers are the stuff of rocket science—quite literally! Mounted in spacecraft, they're a handy way to measure not just changes in rocket speed but also apogee (when a craft is at its maximum distance from Earth or another mass, so its acceleration due to gravity is at a minimum) and orientation (because tilting something changes the way gravity acts on it and the force it feels). Accelerometers are also widely used in inertial navigation and guidance systems in such things as airplane and ship autopilots. Another very common use in transportation is in automobile airbags: when an accelerometer detects a sudden change in a car's speed, signaling an imminent collision, it triggers an electrical circuit that makes the airbags inflate. 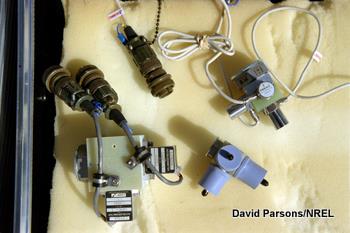 Photo: A selection of accelerometers used for testing wind turbines. Photo by David Parsons courtesy of US Department of Energy/National Renewable Energy Laboratory (US DOE/NREL).

If you have a modern cellphone, MP3 player, or handheld games console, it probably has an accelerometer built into it so it can sense when you tilt it from side to side. That's how an iPhone or an iPod Touch automatically figures out when to switch the screen layout from portrait to landscape. Many games and "apps" designed for gadgets such as iPhones work by sensing how hard or how fast you move or shake the case using tiny accelerometer chips inside.

You'd be surprised at some of the things accelerometers are used for. Did you know, for example, that hi-tech clothes washing machines have accelerometers that can detect when the load is out of balance and switch off the electric motor to stop them from spinning themselves to pieces? Or that heating appliances, such as electronic irons and fan heaters, have accelerometers inside that detect when they fall over and switch them off to stop them causing fires? Amazing, eh? Isn't rocket science useful!

Before you can understand accelerometers, you really need to understand acceleration—so let's have a quick recap. If you have a car that accelerates from a standstill to a speed (or, strictly speaking, velocity) of 100km/h in 5 seconds, the acceleration is the change in velocity or speed divided by the time—so 100/5 or 20 km/h per second. In other words, each second the car is driving, it adds another 20km/h to its speed. If you're sitting inside this car, you could measure the acceleration using a stopwatch and the car's speedometer. Simply read the speedometer after 5 seconds, divide the reading by 5, and you get the acceleration.

But what if you want to know the acceleration moment by moment, without waiting for a certain time to elapse? If you know about the laws of motion, you'll know that the brilliant English scientist Isaac Newton defined acceleration in a different way by relating it to mass and force. If you have a certain force (say, the power in your leg as you kick it outward) and you apply it to a mass (a soccer ball), you'll make the mass accelerate—the ball will shoot off into the air. 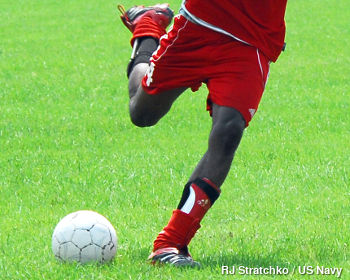 In other words, acceleration is the amount of force we need to move each unit of mass. Looking at this equation, you can see why soccer balls work the way they do: the harder you kick (the more the force), or the lighter the ball (the less the mass), the more acceleration you'll produce—and the faster the ball will fly through the sky.

You can also see we now have a second way of calculating acceleration that doesn't involve distance, speed, or time. If we can measure the force that's acting on something and also its mass, we can figure out its acceleration simply by dividing the force by the mass. No need to measure speed or time at all!

How do accelerometers work? 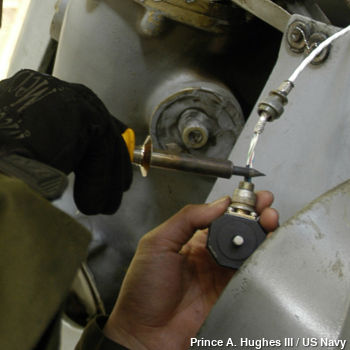 Photo: An electrician solders broken wires connected to an accelerometer in a Seahawk helicopter. Photo by Prince A. Hughes III courtesy of US Navy and Wikimedia Commons.

This equation is the theory behind accelerometers: they measure acceleration not by calculating how speed changes over time but by measuring force. How do they do that? Generally speaking, by sensing how much a mass presses on something when a force acts on it.

This is something we're all very familiar with when we're in cars. Imagine you're sitting in the back seat of a car, happily minding your own business, and the driver accelerates suddenly to pass a slow-moving truck. You feel yourself thumping back into the seat. Why? Because the car's acceleration makes it move forward suddenly. You might think you move backward when a car accelerates forward, but that's an illusion: really what you experience is the car trying to move off without you and your seat catching you up from behind!

The laws of motion tell us that your body tries to keep going at a steady speed, but the seat is constantly pushing into you with a force and making you accelerate instead. The more the car accelerates, the more force you feel from your seat—and you really can feel it! Your brain and body work together to make a reasonably effective accelerometer: the more force your body experiences, the more acceleration your brain registers from the difference between your body's movements and those of the car. (And it picks up useful clues from other sensations, including the rate at which moving objects pass by the window, the change in sound of the car's engine, the noise of the air rushing past, and so on.) Moment by moment, you sense changes in acceleration from changes in sensations on your body, not by calculating how far you've traveled and how long it took.

And accelerometers work in broadly the same way.

There are many different types of accelerometers. The mechanical ones are a bit like scaled-down versions of passengers sitting in cars shifting back and forth as forces act on them. They have something like a mass attached to a spring suspended inside an outer casing. When they accelerate, the casing moves off immediately but the mass lags behind and the spring stretches with a force that corresponds to the acceleration. The distance the spring stretches (which is proportional to the stretching force) can be used to measure the force and the acceleration in a variety of different ways. Seismometers (used to measure earthquakes) work in broadly this way, using pens on heavy masses attached to springs to register earthquake forces. When an earthquake strikes, it shakes the seismometer cabinet but the pen (attached to a mass) takes longer to move, so it leaves a jerky trace on a paper chart. 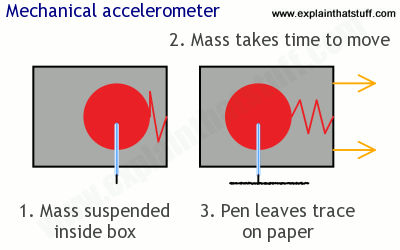 Artwork: The basic concept of a mechanical accelerometer: as the gray accelerometer box moves from side to side, the mass (red blob) is briefly left behind. But the spring connecting it to the box (red zig-zag) soon pulls it back into position and, as it moves, it draws a trace (blue line) on the paper.

Alternative designs of accelerometers measure force not by making a pen trace on paper but by generating electrical or magnetic signals. In piezoresistive accelerometers, the mass is attached to a potentiometer (variable resistor), a bit like a volume control, which turns an electric current up or down according to the size of the force acting on it. Capacitors can also be used in accelerometers to measure force in a similar way: if a moving mass alters the distance between two metal plates, measuring the change in their capacitance gives a measurement of the force that's acting. 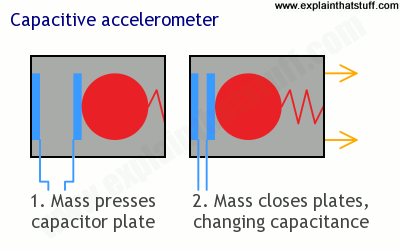 Artwork: The broad concept of a capacitive accelerometer: as the gray accelerometer box moves to the right, the red mass is left behind and pushes the blue metal plates closer together, changing their capacitance in a measurable way.

In some accelerometers, piezoelectric crystals such as quartz do the clever work. You have a crystal attached to a mass, so when the accelerometer moves, the mass squeezes the crystal and generates a tiny electric voltage. 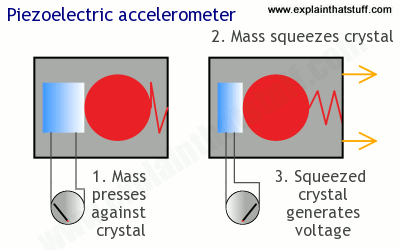 In Hall-effect accelerometers, force and acceleration are measured by sensing tiny changes in a magnetic field.

How does a MEMS accelerometer chip work?

The accelerometers you can find inside cellphones clearly don't have gigantic masses bouncing up and down on springs—you'd never fit something so big and clumsy inside a phone! Instead, cellphone accelerometers are based on tiny microchips with all their components chemically etched onto the surface of a piece of silicon. Technically, these are called MEMS accelerometers, where "MEMS" stands for Micro Electro Mechanical Systems (MEMS). It sounds pretty complex, but it just means a small electrical and mechanical device mounted on a handy silicon chip.

Here's a very simplified illustration of what you'd find in one of these semiconductor accelerometers, as they're also known: 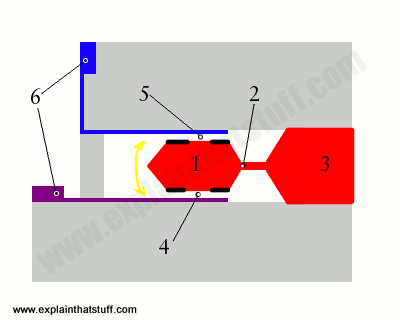 Now the amazing thing about capacitors like this is that they're fabricated on single, microscopic chips, with the various different electrodes and electrically conducting layers made from different types of silicon (n-type and p-type, if you're familiar with how silicon is "doped" to make components such as transistors and diodes.)

For much more technical detail, take a look at these accelerometer patents: