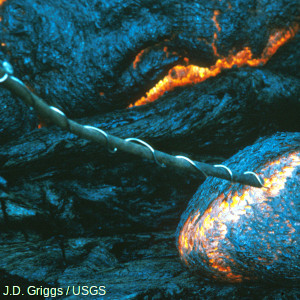 Now that's what I call hot! But how hot is it, exactly? If you want to measure the temperature of something as hot as a volcano, an ordinary thermometer isn't any use. Stick the bulb of a mercury thermometer into volcanic lava (which can be well over 1000°C or 1800°F) and you'll get a surprise: the mercury inside will instantly boil (it turns from liquid to gas at a mere 356°C or 674°F) and the glass itself might even melt (if the lava is really hot). Try measuring something super-cold (like liquid nitrogen) with a mercury thermometer and you'll have the opposite problem: at temperatures below −38°C/38°F, mercury is a solid lump of metal. So how do you measure really hot or cold things? With a cunning pair of electric cables called a thermocouple. Let's take a closer look at how it works!

Photo: Measuring the temperature of volcanic lava with a thermocouple. This photo was taken at Hawaii Volcanoes National Park following the eruption of Kilauea Volcano in 1983. Photo by J.D. Griggs courtesy of US Geological Survey (USGS).

What's the connection between electricity and heat? 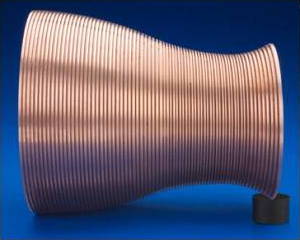 Have you noticed that when we talk about conduction in science we can be referring to two things? Sometimes we mean heat and sometimes we mean electricity. A metal like iron or gold conducts both heat and electricity really well; a material like a plastic doesn't conduct either of them very well at all. There is a connection between the way a metal conducts heat and the way it conducts electricity. If you've read our main article on electricity, you'll know electric current is carried through metals by tiny charged particles inside atoms called electrons. When electrons "march" through a material, they haul electricity with them a bit like ants carrying leaves. If electrons are free to carry electrical energy through a metal, they're also free to carry heat energy—and that's why metals that conduct electricity well are also good conductors of heat. (Things aren't quite so simple for nonmetals, however, because heat travels through them in other, more complex ways. But for the purposes of understanding thermocouples, metals are all we need to consider.)

Thomas Seebeck and the thermoelectric effect

Suppose you stick an iron bar in a fire. You'll have to let go of it quite quickly because heat will be traveling up the metal from the fire to your fingers. But did you realize that electricity is traveling up the bar as well? The first person to properly cotton on to this idea was German physicist Thomas Seebeck (1770–1831), who found that if two ends of a metal were at different temperatures, an electric current would flow through it. That's one way of stating what's now known as the Seebeck effect or thermoelectric effect. Seebeck found things got more interesting as he explored further. If he connected the two ends of the metal together, no current flowed; similarly, no current flowed if the two ends of the metal were at the same temperature.

Artwork: The basic idea of a thermocouple: two dissimilar metals (gray curves) are joined together at their two ends. If one end of the thermocouple is placed on something hot (the hot junction) and the other end on something cold (the cold junction), a voltage (potential difference) develops. You can measure it by placing a voltmeter (V) across the two junctions.

Seebeck repeated the experiment with other metals and then tried using two different metals together. Now if the way electricity or heat flows through a metal depends on the material's inner structure, you can probably see that two different metals will produce different amounts of electricity when they're heated to the same temperature. So what if you take an equal-length strip of two different metals and join them together at their two ends to make a loop. Next, dip one end (one of the two junctions) in something hot (like a beaker of boiling water) and the other end (the other junction) in something cold. What you find then is that an electric current flows through the loop (which is effectively an electric circuit) and the size of that current is directly related to the difference in temperature between the two junctions.

Why does the Seebeck effect happen? 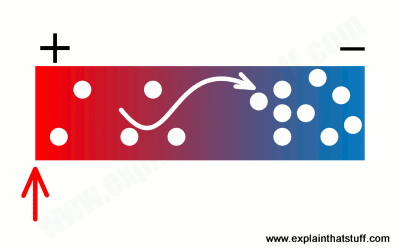 Artwork: How the Seebeck effect works: if you heat one end of a metal (red arrow), electrons (white blobs) "diffuse" along it, making the colder end slightly more negatively charged than the hotter end.

As we've already seen, there's a close connection between how well electricity flows in a material (electrical conductivity) and how well heat flows (thermal conductivity). We can think of the electrons in a metal as being a bit like the molecules in a gas, which jiggle around with kinetic energy. The hotter the gas, the more kinetic energy each molecule has, on average, and the faster it jiggles. Just as gas molecules move faster when you heat them, so electrons tend to "diffuse" more when a metal is hotter. If you heat one end of a metal bar, electrons move quicker there and produce a net flow toward the colder end. This makes the hotter end slightly positively charged and the colder end slightly negatively charged, producing a voltage difference—the Seebeck effect. 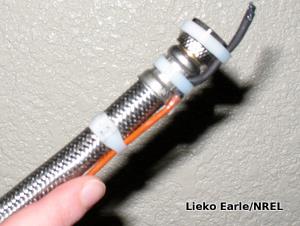 What about the Seebeck effect in a junction between two different metals? Electrons move more freely in some materials than others. That's the basic difference between conductors and insulators and between good conductors and bad ones. If you connect two different metals together, free electrons tend to move from one material to the other through a kind of diffusion. So, for example, if you connect a lump of copper to a lump of iron, electrons tend to move from the iron to the copper, leaving the copper more negatively charged and the iron more positively charged. If the iron and copper are joined in a loop with two junctions, one of the junctions will gain a positive voltage and the other will gain an equal and opposite negative voltage, making no voltage overall. But if one of the junctions is hotter than the other, electrons will diffuse between the metals more readily there. That means the voltage at the two junctions will be different by an amount that depends on their temperature difference. That's the Seebeck effect—and it's the basis of how most thermocouples work.

Measuring temperatures with a thermocouple 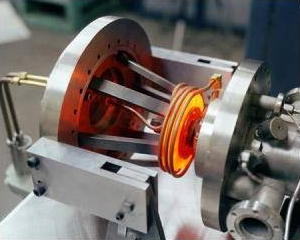 Photo: The kind of high-temperature laboratory test for which thermocouples are invaluable. Photo by courtesy of NASA Glenn Research Center (NASA-GRC).

See where we're going with this? If you measure a few known temperatures with this metal-junction device, you can figure out the formula—the mathematical relationship—that links the current and the temperature. That's called calibration: it's like marking the scale on a thermometer. Once you've calibrated, you have an instrument you can use to measure the temperature of anything you like.

Simply place one of the metal junctions in a bath of ice (or something else of a precisely known temperature). Place the other metal junction on the object whose temperature you want to find out. Now measure the voltage change that occurs and, using the formula you figured out before, you can precisely calculate the temperature of your object. Brilliant! What we have here is a pair (couple) of metals that are joined together (coupled) for measuring heat (which, in Greek, was called "thermos"). So that's why it's called a thermocouple.

All we really care about is one of the two junctions—the one measuring the unknown temperature. So when you see a photograph or an illustration of a thermocouple, that's usually all that's shown:

Photo: A typical thermocouple. You can see clearly here how two different metals have been joined together inside a protective outer sheath. Photo by courtesy of NASA Glenn Research Center (NASA-GRC).

What you see here is the part of a thermocouple that measures the unknown temperature. In practice, it's wired into a larger circuit, something like the one below, with the two outputs feeding into an electronic voltage amplifier. This increases the very small voltage difference between the two parts of the circuit (the upper and lower paths in this diagram) so it can be measured more accurately. To be absolutely clear, the instrument you see in the photo up above is just the extreme left part of the artwork below:

Photo: How a typical thermocouple is used in practice, as part of a larger circuit that includes two metal junctions and a voltage amplifier.

A wide range of different thermocouples are available for different applications based on metals with high conductivity, such as iron, nickel, copper, chromium, aluminum, platinum, rhodium and their alloys. Sometimes a particular thermocouple is chosen purely because it works accurately for a particular temperature range, but the conditions under which it operates may also influence the choice (for example, the materials in the thermocouple might need to be nonmagnetic, noncorrosive, or resistant to attack by particular chemicals).

Artwork: Parts of a typical thermocouple. 1) Protective metal sheath (dark gray) made from stainless steel or an alloy (perhaps nickel and chromium); 2) First wire made from one metal (red); 3) Second wire made from a different metal (blue) joined to first wire to make a thermocouple; 4) Insulation (green) made from crushed and compacted mineral oxide. 5) Cement to hold insulation in place; 6) Electrical insulation made from rubber or plastic. Artwork from US Patent 4,018,624: Thermocouple structure and method of manufacturing same by Silvio J. Rizzolo, courtesy of US Patent and Trademark Office.

What are thermocouples used for?

Thermocouples are widely used in science and industry because they're generally very accurate and can operate over a huge range of really hot and cold temperatures. Since they generate electric currents, they're also useful for making automated measurements: it's much easier to get an electronic circuit or a computer to measure a thermocouple's temperature at regular intervals than to do it yourself with a thermometer. Because there's not much to them apart from a pair of metal strips, thermocouples are also relatively inexpensive and (provided the metals involved have a high enough melting point) durable enough to survive in pretty harsh environments.

If you're looking for much more technical descriptions of thermocouples, patents are a great place to begin. Here are a few examples I've picked out from the USPTO database (but there are hundreds more):