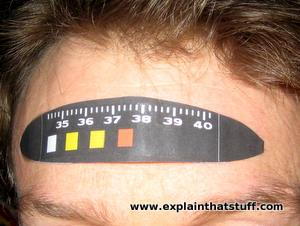 Phew it's hot, brrr it's cold!—most animals have a built-in ability to sense changes in temperature because their lives depend on it. But it's not just living things that can detect hot and cold: all kinds of materials in the world around us change size, shape, or form as temperatures rise and fall. We use this idea in gadgets such as thermometers, which measure temperatures precisely using metals that expand when they're heated and contract when they're cooled. Some materials signal temperature changes even more dramatically by changing color as they get hotter or colder: we say they're thermochromic (from the Greek words thermos = heat, chroma = color). Materials like this are the secret ingredient in everything from mood rings and forehead strip thermometers to battery testers and coffee cups that change color when you pour hot drinks into them. How exactly do they work? Let's take a closer look!

Photo: Forehead strip thermometers like this are printed with thermochromic chemicals (liquid crystals) that change color with temperature to reveal whether someone's suffering from a fever (if their temperature exceeds normal body temperature of ~37°C). They're inexpensive, safe, easy-to-use, and hygienic. You can get similar devices marked with lower temperatures for use in your refrigerator or your aquarium.

Everyone's heard the phrase "red hot," but what does it actually mean? If you heat an iron bar in a furnace, you'll see it slowly changes color from its original gray-black (at about 600°C or 1100°F) to red hot (~950°C or 1750°F), yellow hot (~1100°C or 2000°F), and then white hot (at higher temperatures still). The hotter it gets, the more energy it contains. As the fire pumps energy into the iron, the iron atoms become "excited" and unstable, and their electrons absorb the energy briefly, then hurl it back out again in the form of light particles known as photons. That's generally why hot things change color—and why their color changes (from red to white) as they get hotter and spew out different kinds of light energy. It's an example of what's called incandescence, where heat energy is constantly converted to light energy. (If you want to know more about the theory, check out this simple BBC explanation of black body radiation.) 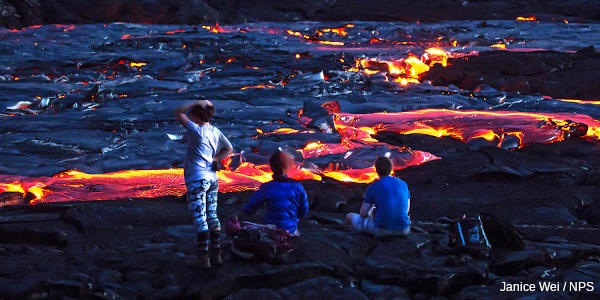 Photo: Incandescence: objects with a lot of heat energy give off visible light energy: they glow red, yellow, or white hot. The lava flowing from this volcano is glowing red hot, so we can tell it's at a temperature of something like 1000°C (1800°F). Photo by Janice Wei courtesy of US National Park Service.

Thermochromic materials change color at much lower temperatures and for very different reasons that have nothing to do with incandescence. There are two main types of materials that are widely used to produce thermochromic effects. Some use liquid crystals (the materials from which your computer or cellphone display is most likely made); others use organic (carbon-based) dyes known as leucodyes (sometimes written leuco dyes). We'll look at both of these in turn. 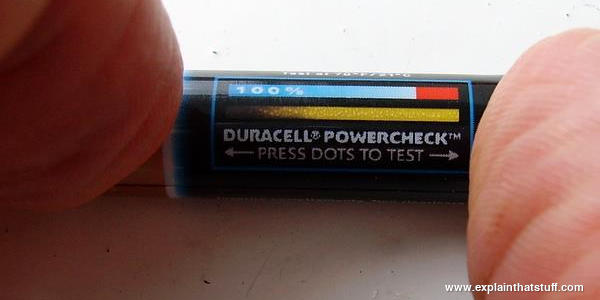 Photo: Battery testers like this one use similar thermochromic technology to forehead thermometers. When you press the contacts, you make a current flow through the tester. The more "juice" left in the battery, the bigger the current, and the more the strip heats up. The thermochromic chemicals inside the tester effectively work just like a strip thermometer: they're measuring electricity indirectly by measuring temperature. 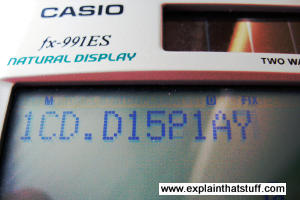 Photo: Liquid crystals are most familiar to us in electronic LCD displays like the one on this pocket calculator, but the same technology is also used in thermochromic thermometers.

If you're not already familiar with liquid crystals, you might like to take a quick look at our main article on how LCDs work. But here's a very quick recap.

As their name suggests, liquid crystals are a bit like solids in some respects and liquids in others. The ones we're interested in are in forms (phases) known as nematic and smectic, in which the molecules are arranged a bit like matches in a box—in layers and roughly pointing the same way. Shine some light on nematic liquid crystals and some of it will reflect back again in a type of reflection known as iridescence—the same phenomenon that makes colors from the scales on a butterfly's wing, the grooves on an old-fashioned LP record, or the surface of a soap bubble. 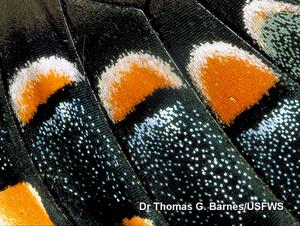 Photo: Thermochromic liquid crystals (TLCs) make colors through iridescence, the same process by which color is produced by the closely spaced scales in a butterfly's wing. This photo of a butterfly wing was taken by Dr Thomas G. Barnes, US Fish and Wildlife Service, published on Flickr under a Creative Commons (BY 2.0) License.

Simply speaking, incoming light waves reflect off nearby crystals and add together by a process called interference, which produces the reflection. The color of the reflected light depends (in a very precise way) on how closely the crystals are together. Heat up or cool down your liquid crystals and you'll change the spacing between them, or push them into a different phase, altering the amount of interference and changing the color of the reflected light from black, through red and all the colors of the spectrum to violet and back to black again. In a nutshell, the liquid crystals look a different color depending on what temperature they are because changes in temperature make them move closer together or further apart (depending on the material). 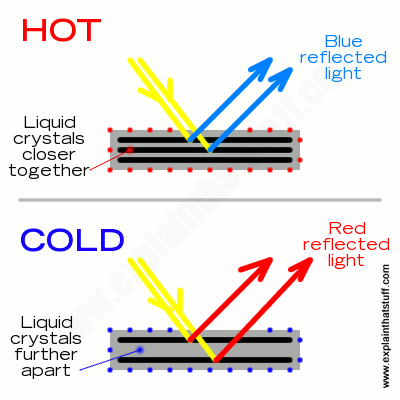 Artwork: How thermochromic liquid crystals work: Top: Incoming light rays hit the layers of liquid crystals (black lines) and reflect back out again, with outgoing rays interfering (adding together or subtracting from one another) to produce light of a particular color—in this case, blue—through what's called Bragg diffraction (Bragg scattering). The color of the reflected light depends on how closely the crystal layers are together. Bottom: In this made-up example, cooling the liquid crystals makes them move further apart, changing the way the outgoing light waves interfere and making the reflected light redder than before.

In reality, the molecules in liquid crystals can form themselves into a number of different phases, and because they're not pointing randomly in all directions, they're generally anisotropic (they do different things to light when it hits them from different directions). In some thermochromic devices, the crystals start off, at low temperatures, in what's called the smectic phase, which means the molecules are organized in layers that slide easily past one another. In this form, they happen to be completely transparent (they reflect little or no light, allowing virtually all light to pass through them). At higher temperatures, they shift to a different phase (known as chiral/cholesteric), and start to show shifting colors (sometimes called "color play") as they get hotter. At a certain higher temperature, known as the clearing point, the molecules stop behaving like liquid crystals altogether and shift to an entirely different form, known as an isotropic state, which means they have the same optical properties in every direction. In this form, they're transparent once again. So, looking from the outside, you might see a material that changes from being transparent to colored, changes color as the temperature rises, and then goes back to transparent again; but on the inside, the molecules are doing radically different things at each temperature.

Thermochromic liquid crystals (TLCs, as they're known) give a relatively accurate measurement of temperature within certain bands, so they're widely used in such things as strip thermometers (placed on a baby's forehead, perhaps, or stuck to the inside of a refrigerator or an aquarium tank). Typically they're manufactured in the form of microscopic spheres (capsules) embedded in a plastic (polymer).

Sometimes we want things to change color as they get hotter or colder just for novelty or entertainment—and we don't need anything as sophisticated as a TLC for that. You've probably seen those coffee cups with hidden messages or pictures that suddenly appear, like magic, as you fill them with hot water? Or maybe you have a T-shirt or a poster that changes color when you touch it? Things like this are printed with special temperature-sensitive dyes (or inks) called leucodyes, which start off transparent (or have a particular color) and become visible (or change to a different color) as the temperature rises or falls.

Leucodyes are organic (carbon-based) chemicals that change color when heat energy makes their molecules shift back and forth between two subtly differently structures—known as the leuco (colorless) and non-leuco (colored) forms. The leuco and non-leuco forms absorb and reflect light differently, so appear very different colors when printed on a material such as paper or cotton.

Photo: Temperature-sensitive printing: the promotional competition sticker I've stuck to this cup is designed to change color when its temperature changes. Put it against a cold cup and the whole thing looks black. Add boiling water to the cup and the black background ink (printed with a leucodye) turns white, revealing a hidden message printed in normal black ink. Did I win the competition this time? Nope!

Unlike TLCs, which shift color up and down the red-violet spectrum as they get hotter or colder, leucodyes can be mixed in various ways to produce all kinds of color-changing effects at a wide range of everyday temperatures. Leucodyes are much cruder indicators of temperature than TLCs, generally just indicating "cold" versus "hot" with one simple color change. That's because all can they do is switch back and forth between their two different forms (leuco and non-leuco). Like TLCs, leucodyes can be printed on the surface of other materials in the form of microscopic capsules, but they can be produced more easily with traditional printing methods such as screenprinting. That's why leucodyes are more widely used in mass-produced, everyday, novelty items than TLCs, which tend to require special printing equipment. Leucodyes are also used to make thermal computer printer paper (the slippery, curly paper used in checkout receipts that fades quite quickly in sunlight) and in "hypercolor" t-shirts that change color when you touch them. 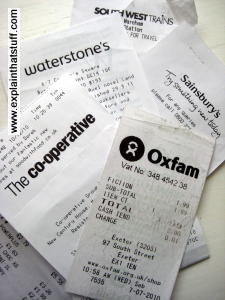 Photo: Thermal paper: Checkout receipts like these are printed on thermochromic paper by thermal printers: where the paper is heated up by a printhead, it changes color from white to black, making the characters you see here. One drawback with thermal paper is that the print fades relatively quickly, especially after exposure to sunlight, so it's not much use for making prints you want to keep for a long time. Inexpensive fax machines typically use this kind of paper too, though better models use inkjet printers that print onto plain paper.

There are lots of thermochromic inventions on file; here are a few to whet your appetite: