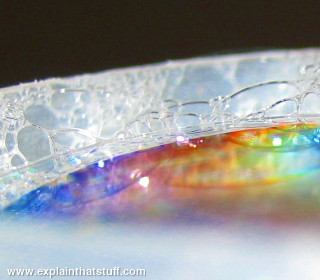 What do soap bubbles, peacocks, compact discs, and telescopes have in common? On the surface, nothing at all! Then again, if you look closely at the surface, in just the right kind of light, you'll see something you might not expect: unusual, often spectral colors. Twist a compact disc near a window, in the sunlight, and you'll get all kinds of neat spectral effects. You can do the same thing with soap bubbles: if you blow gently on their surface, rainbow colors will swim crazily in front of your eyes. Quite what you can do with a beautiful, iridescent peacock, I have no idea, but those feathers are surely worth more than a second glance? Inspect the surface of a decent telescope or pair of binoculars and you'll see a bluey-purplish color on the glass. What do all these colorful things have in common? They all use interference caused by thin films of materials or similar effects. How do they work? Let's take a closer look!

Photo: How to photograph spectral soap bubbles: It's easy to make colors appear on the surface of soap bubbles, but not so easy to photograph them: this is the best shot I managed after about half-an hour's trying and several dozen photos. What you need is good light: a well-lit kitchen or bathroom is the place to work. You can make bubbles by squirting some detergent in your sink, adding water, and flapping your hand back and forth at speed. To photograph one bubble, you need to capture it with a piece of bent wire (or use something like the circular-shaped cap off an aerosol can—capture a soap film carefully across the open end). Blow on the film gently to make the colors change. Switch off your autofocus and set the camera to focus manually in the center of the image (so you can be sure you're getting the colored part of the bubble in focus). If your bathroom or kitchen is too dark, try pulling some bubbles onto an aerosol cap, carrying it to a sunny window-ledge, and then photographing it there from different angles.

Photo: Rainbow: The water droplets refract (bend) the shorter wavelengths of light (blue) more than the longer wavelengths (red), so blue is always on the inside of the curve.

We've all seen rainbows—but let's recap briefly on where their colors come from. Rainbows happen when droplets of water in the sky bend light beams coming from the Sun. Remember that ordinary visible light ("white light") is made from many different colors? Different colors of light are made by light waves of different wavelengths. When different wavelengths of light pass through a raindrop, they bend by different amounts, with the blue light bent more than the red. The bending effect, which is called light refraction, effectively splits one beam of light into the different colored rays of light from which it's made. So a huge cloud of raindrops will split a sunbeam and bend it into a spectrum, with violet and blue at one end and red at the other. That's how water droplets make colored light—but something slightly different is happening in soap bubbles.

If you've ever tossed pebbles in a very calm lake, you'll have spotted ripples spreading out in circles. If you throw two pebbles so they hit the water at the same time, a meter or two (a few feet) apart, you'll get two sets of ripples rippling toward each other. Where the ripples meet they overlap. Some of the ripples add together, some cancel out. This is called interference. When the ripples add, it's constructive interference; when they cancel out (or subtract), it's destructive interference. The result of interference is a brand new set of ripples quite different from the ones that either stone makes by itself. Interference can happen with light waves too—and it's essentially what's happening in colorful soap bubbles.

How does a soap bubble make colors?

To figure out why a soap bubble does funny things to light, we need to know a bit more about bubbles themselves. What are they anyway? Soap is a kind of detergent and the bubbles it makes are a bit like balloons filled with air, but with one important difference. Where a balloon is made of fairly sturdy latex (thin rubber, in other words), the edge of a soap bubble is made from a thin film of soap and water. You make a soap bubble a bit like you make a sandwich. You need an ultra-thin layer of soap (like one piece of bread), then a layer of water (your filling, in the middle), and then another layer of soap (the top layer of bread). Wrap your sandwich into a perfect sphere and—hey presto—there's your soap bubble. How do you make a soap and water sandwich wrap into a sphere? Easy. Blow on soapy water! You'll find the soap-sandwich film wraps up all by itself, trapping the air inside. And what you get—if you're really lucky—is a perfectly spherical soap bubble held together by surface tension. It forms a sphere because that just happens to be the smallest, most stable structure it can have.

When white light shines on a bubble, strange things happen. Remember that light can behave like a wave. When light waves hit a bubble, some of them bounce straight back off the outer part of the soap film. Others carry on through but then bounce off the inner part of the film. So one set of light rays shine into a soap bubble, but two sets of rays come back out again. When they emerge, the waves that bounce off the inner film have traveled a tiny bit further than the waves that bounced off the outer film. So we have two sets of light waves that are now slightly out of step. Like two sets of ripples on a pond, these waves start merging. Just like on a pond, some add together and some cancel out. The overall effect is that some of the colors in the original white light disappear altogether, leaving other colors behind. These are the colors you see in soap bubbles. 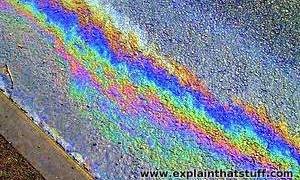 Photo: 1) In this soap-bubble closeup, you can see how the thickness of the soap film varies from place to place. 2) Exactly the same thing happens when gasoline (petrol) or diesel sits on water in the street. On a street puddle, the oil is generally thickest in the center of a puddle, which is why blue (which occurs where a thin film is at its thickest) is often (but not always!) one of the central colors.

Stare at any one soap bubble and you'll notice that the colors vary across its surface (from place to place) and they also gradually change with time until the bubble bursts. Why is that? The soap film isn't quite the same thickness all over. Where the soap film is thick, red light is canceled out leaving the bubble looking blue or green. When the film is thinner, green is canceled, leaving the film magenta. If you blow on the film, the soap solution starts to evaporate and the bubble gets thinner. If you blow gently enough, you can make the colors change slowly from blue or green to yellow and violet, in the exact order you see them in a rainbow (red-orange-yellow-green-blue-indigo-violet). Try it next time you're in the bathtub or washing up at the sink! Eventually, as the film grows thinner and thinner, the colors disappear. The bubble goes totally clear. At this point, the film is just a few molecules thick. Then it bursts. 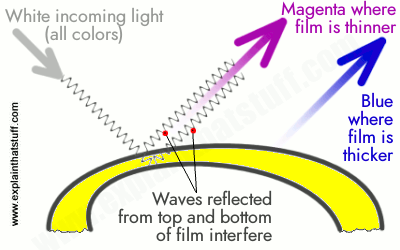 Artwork: Interference on the surface of a soap bubble: An incoming light ray is partly reflected by the top surface of the soap film and partly reflected by the bottom surface. The wave reflected from the bottom surface has traveled further (an extra distance equal to twice the thickness of the film) so emerges out of step with the top wave. When the two waves meet, they add together, and some colors are removed by destructive interference. Where the film is thickest, the bubble appears more blueish; where it's thinner, it will look more violet or magenta. 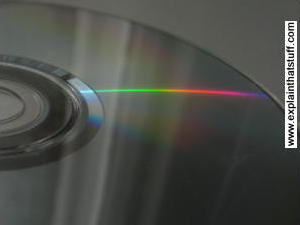 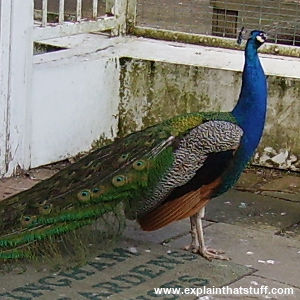 A similar thing is going on when we see spectral colors on the surface of diesel or gasoline sitting on puddles of water on the road. What we have in both cases is light waves interfering in a thin-film of soap or oil, so it's an example of what's called thin-film interference. Thin-film interference is also what happens on the surface of a CD or DVD, where the protective lacquer coating acts as the thin film.

There isn't a thin film of soap or lacquer on the surface of a bird or a butterfly, so what's going on there? We're still seeing interference, but it's actually caused by the minute surface structure of the skin or feathers of the bird, butterfly, beetle, or other creature we're looking at. Incoming waves are reflected back from different parts of the surface by microscopically (or perhaps even nanoscopically) different amounts and it's this that produces the amazing colors we see in nature—a wonderful phenomenon we call iridescence. Living creatures must find iridescence extremely useful—for attracting mates and warning predators—or it wouldn't be used so widely in the natural world. 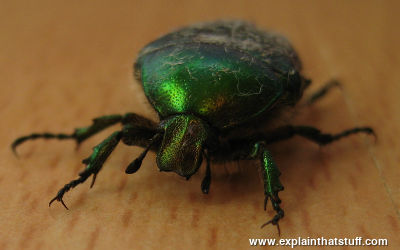 Photo: The wonderful metallic green shell of this rose chafer beetle is another example of iridescence. Unfortunately, it picked up a bit of dust crawling over my floor and I didn't want to harm it by getting out the duster!

How do anti-reflective coatings work?

Are there any practical uses of thin-film interference—or is it just one of those neat bits of science that makes the world more interesting but has no everyday value? The major use is in those anti-reflective (AR)/anti-glare coatings you get on such things as eyeglasses, binoculars, and other optical instruments. The surface of the glass is coated with one or more thin films of plastic (typically PET, polycarbonate, or acrylic) perhaps 0.1–0.5mm thick. When incoming waves of light hit the coated glass, some reflect off the front surface of the film-coating, some reflect off the back surface where the film meets the glass, and some are transmitted straight through. The film is specially designed so that the two reflected rays make unwanted wavelengths of light interfere destructively, while the wavelengths of light we're interested in pass through the glass and their transmission is effectively enhanced. That gives a brighter image with much less glare, and a major reduction in distracting "ghost images" (often seen when you wear eyeglasses to look at a computer screen or drive at night). 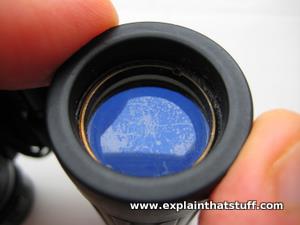 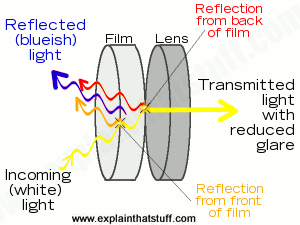 Photos: 1) The anti-reflective coating of these binoculars makes them look a blueish-purple when you inspect them from an angle. 2) This artwork shows you why it happens. It's much the same as a soap bubble, with waves reflected from the top and bottom surface of the film adding together and interfering to remove unwanted wavelengths of light. The thickness of the film is specifically designed to maximize certain wavelengths of light (typically the middle wavelengths such as yellow and green) at the expense of others (the red and blue wavelengths at either end of the visible spectrum). The film is directly on top of the lens (and very much thinner), but I've drawn them slightly apart (and the same size) for the sake of clarity.

These explore applications of thin-film interference in much more technical detail: