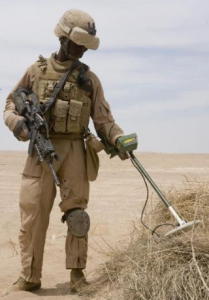 Bleep bleep! Bleep bleep! Is there anything more exciting than discovering treasure? Millions of people all around the world have fun using metal detectors to uncover valuable relics buried underground. Exactly the same technology is at work in our military and security services, helping to keep the world safe by uncovering guns, knives, and buried mines. Metal detectors are based on the science of electromagnetism. Let's find out how they work!

Photo: This US Marine is using a Garrett metal detector to sweep for hidden weapons. Photo by Tyler Hill courtesy of US Marine Corps.

If you've ever made an electromagnet by wrapping a coil of wire around a nail and hooking it up to a battery, you'll know that magnetism and electricity are like an old married couple: whenever you find one, you'll always find the other, not very far away.

We put this idea to good practical use every minute of every day. Every time we use an electric appliance, we're relying on the close connection between electricity and magnetism. The electricity we use comes from power plants (or, increasingly, from renewable sources like wind turbines) and it's made by a generator, which is really just a big drum of copper wire. When the wire rotates at high speed through a magnetic field, electricity is "magically" generated inside it—and we can harness that power for our own ends. The electric appliances we use (in everything from washing machines to vacuum cleaners) contain electric motors that work in precisely the opposite way to generators: as electricity flows into them, it generates a changing magnetic field in a coil of wire that pushes against the field of a permanent magnet, and that's what makes the motor spin. (You can find out much more about this in our article on electric motors.) 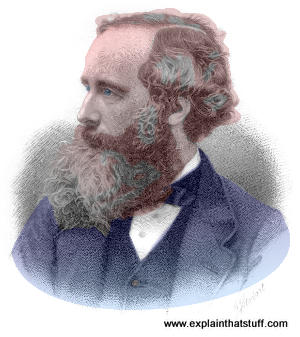 In short, you can use electricity to make magnetism and magnetism to make electricity. A fantastically clever Scottish physicist named James Clerk Maxwell (1831–1879) summed all this up in the 1860s when he wrote out four deceptively simple mathematical formulas (now known as Maxwell's equations). One of them says that whenever there's a changing electric field, you get a changing magnetic field as well. Another says that when there's a changing magnetic field, you get a changing electric field. What Maxwell was really saying was that electricity and magnetism are two parts of the same thing: electromagnetism. Knowing that, we can understand exactly how metal detectors work. 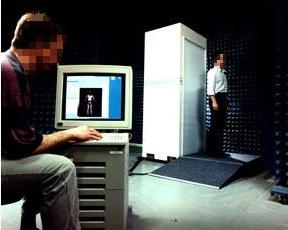 Photo: This advanced walk-through detector developed at Pacific Northwest National Laboratory uses wave imaging to detect plastic and ceramic weapons not picked up by conventional metal detectors. Photo by courtesy of US Department of Energy.

How electromagnetism powers a metal detector

Artwork: The modern-style, compact metal detector was invented by Charles Garrett in the early 1970s. You can clearly see the two coils (which I've colored red and blue). The box (orange) at the top of the handle (green) contains the control circuitry, including a battery (not shown), loudspeaker (24), volume switch (27), sensitivity control (28), and on/off switch (29). This illustration is from Charles Garrett's US Patent 3,662,255, granted in 1972, courtesy of US Patent and Trademark Office.

So thank you, James Clerk Maxwell, for helping us see how metal detectors work—by using electricity to create magnetism, which creates more electricity somewhere else.

What make a metal detector buzz when you sweep it over buried treasure? Why is it important to keep the detector moving?

What are the different types of metal detectors?

As we saw up above, magnetic fields are produced by changing electric fields, which oscillate at a particular frequency. Different frequencies give better or worse results depending on what kind of metal you're looking for, how deep in the ground you're searching, what kind of material the ground is made from (sand or soil or whatever), and so on.

Although metal detectors all work in broadly the same way, by converting electricity into magnetism and back again, they come in three main types. The simplest ones are suitable for all kinds of general-purpose metal-detecting and treasure hunting. They're called VLF (very low frequency) detectors because they use a single, fixed detecting frequency typically around 6–20 kHz (generally less than 30kHz). 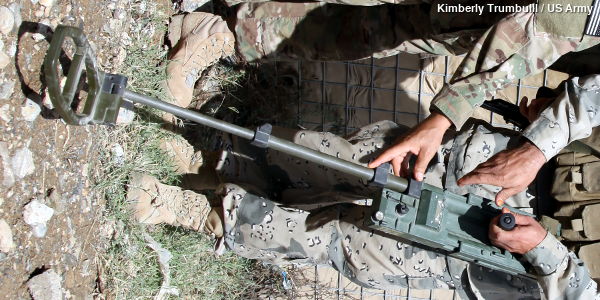 Photo: This foldable VLF mine detector (a US Army Vallon VMW1) can be used on land or underwater at depths up to 30m (100ft). Photo by Kimberly Trumbull courtesy of US Army, published on Wikimedia Commons.

You'll also come across PI (pulse induction) detectors, which use higher-frequencies and pulsed signals. They can generally pick things up deeper in the ground than VLF detectors, but they're not as discriminating and nothing like as commonly used. A third type is known as the FBS (full-band spectrum) detector, which uses multiple frequencies simultaneously—so, in effect, it's a bit like using several slightly differently tuned detectors at the same time. 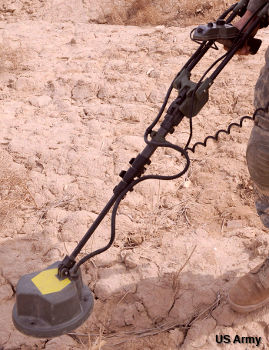 Photo: Clearing mines. This army mine detector (a CyTerra AN/PSS-14) combines a super-sensitive, pulsed metal detector and a ground-penetrating radar (GPR) in a single, handheld unit. It can detect mines with low metallic content and distinguish between mine metal, irrelevant metal clutter, and soil with high metal content. Photo courtesy of US Army published on Flickr under a Creative Commons (CC BY 2.0) licence.

How deep will a metal detector go?

There's no exact answer to that question, unfortunately, because it depends on all kinds of factors, including:

Generally speaking, metal detectors work at a maximum depth of about 20–50cm (8–20in).

Where are metal detectors used?

Metal detectors aren't just used to find coins on the beach. You can see them in walk-through scanners at airports (designed to stop people carrying guns and knives onto airplanes or into other secure places such as prisons and hospitals) and in many kinds of scientific research. Archeologists often frown on untrained people using metal detectors to disturb important artifacts but, used properly and with respect, metal detectors can be valuable tools in historic research. 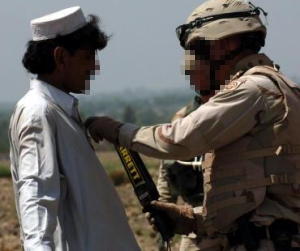 Photo: This wand-type detector, called a SuperScanner and made by Garrett Metal Detectors, is being used to check visitors to a medical clinic in Afghanistan. It runs off a built-in 9-volt battery that provides about 60 hours of continuous operation. If you find metal, the detector lets you know with a combination of flashing LED lights and a warbling noise. It's 42cm (16.5 in) long and weighs 500g (17.6 oz). Detectors like this cost about $200 (£100). Photo by Christopher Admire courtesy of US Army.

Metal detectors apparently date back to the shooting of US President James A. Garfield in July 1881. One of the bullets aimed at the President lodged inside his body and couldn't be found. Telephone pioneer Alexander Graham Bell promptly cobbled together an electromagnetic metal-locating device called an induction balance, based on an earlier invention by German physicist Heinrich Wilhelm Dove. Although the bullet wasn't found and the President later died, Bell's device did work correctly, and many people credit it as the very first electromagnetic metal locator.

Artwork: Left: Find that bullet! This sketch by William A. Skinkle, from Frank Leslie's illustrated newspaper of August 20, 1881, shows rather a lot of doctors (!) using Bell's induction balance to find the bullet lost in the President's body. The room on the left contains the equipment, on the table-top, which is labelled "interrupter," "condenser," and "battery" (the boxes at the back of the table). You can just make out wires that stretch around the bottom of the picture through to the President's bed on the right. Presumably Alexander Graham Bell is the bearded man talking on the telephone on the right? Courtesy of US Library of Congress.

Portable metal detectors were invented by German-born electronics engineer Gerhard Fischer (which he also spelled "Fisher") while living in the United States, and he applied for a patent on the idea in January 1933. He called his invention the Metalloscope—a "method and means for indicating the presence of buried metals such as ore, pipes, or the like"—and you can see it in the drawing here. The same year, he founded Fisher Research Laboratory, which remains a leading manufacturer of metal detectors to this day. Dr Charles L. Garrett, founder of Garrett Electronics, pioneered modern, electronic metal detectors in the early 1970s. After working for NASA on the Apollo moon-landing program, Garrett turned his attention to his hobby—amateur treasure hunting—and his company revolutionized the field with a series of innovations, including the first computerized metal detector featuring digital signal processing, patented in 1987. 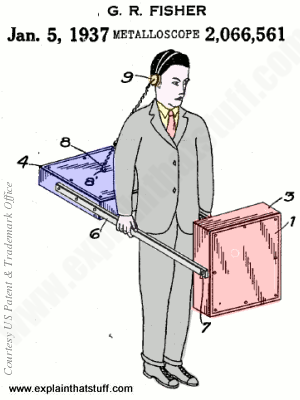 What about nonmetal detectors?

Treasure hunters will always value metal detectors like these because, historically, valuable things were usually made of metal. But in the world of security, it's no longer enough to rely on metal detectors as our sole line of defence. The kinds of people who like to smuggle weapons through security, for example, are well aware that they'll have to walk through metal detectors, and they're likely to try alternatives like ceramic, plastic, or carbon-fiber knives. Although reputable manufacturers do take pains to ensure there are small metallic parts in the handles of "non-metallic" knives, for exactly this reason, there's nothing to stop anyone sharpening a piece of plastic to improvize a knife, as the police have repeatedly found. How, then, do we detect nonmetallic threats?

One solution adopted by airports is to use millimeter-wave scanners (MMS) to show up metal and nometal objects. Essentially, they work like safer versions of X ray machines: the waves pass through clothing but are reflected back by our bodies, and any concealed weapons (metallic or otherwise) show up as pictures on a screen. X-ray machines use very powerful radiation (with wavelengths roughly in the nanometers or billionths of meters), which can be dangerous if your body absorbs too much of them. As their name suggests, millimeter-wave scanners use much longer waves that measure 1–10mm (roughly 10 times smaller than the microwaves sent and received by cellphones), which are much lower in intensity, and therefore pose little or no risk to people's health.

If you're interested in technical details, check out these patents: