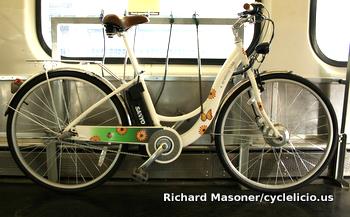 Simple, convenient, cheap, and economical—bicycles are one of the world's favorite forms of transportation. But they're not for everyone. They can be hard to pedal up and down hills or with heavy loads, and elderly or disabled people may find them impossible to manage. In the last few years, a new generation of electric bicycles has begun to revolutionize our idea of environmentally friendly transportation. These new cycles have all the convenience of cars with all the simple economy of ordinary cycles. Let's take a closer look at how they work.

Photo: This typical electric bicycle, a Sanyo Eneloop (now discontinued), had a range of about 30–55 km (17–35 miles) and a top speed of around 24 km/h (15 mph). Note the 250-watt hub motor on the front wheel and the 5.7Ah lithium-ion battery pack (black, marked "Sanyo," just in front of the back wheel). Picture by kind permission and courtesy of Richard Masoner, originally published on Flickr under a Creative Commons (CC BY-SA 2.0) licence.

The basic concept of the electric bike 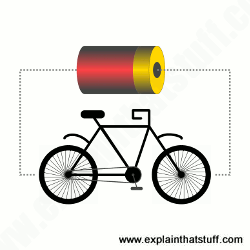 If you have dynamo-powered bicycle lights, you already own an electric-powered bicycle! Consider: as you pump your legs up and down on the pedals, you make the wheels rotate. A small dynamo (generator) mounted on the rear wheel produces a tiny current of electricity that keeps your back safety lamp lit in the dark. Now suppose you could run this process backward. What if you removed the lamp and replaced it with a large battery. The battery would kick out a steady electric current, driving the dynamo in reverse so that it spun around like an electric motor. As the dynamo/motor turned, it would rotate the tire and make the bike go along without any help from your pedaling. Hey presto: an electric bike! It may sound a bit far-fetched, but this is more or less exactly how electric bikes work.

Key parts of an electric bike

There are four key parts to an electric bike: the batteries, the motor, the sturdy frame and spokes, and the brakes. 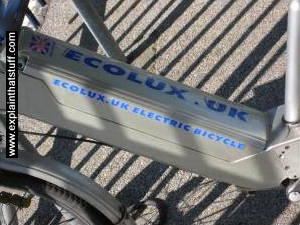 Photo: A battery pack built into the frame of a typical electric bike.

The batteries are the most important parts of the bike, because (if you don't do any pedaling) they contain all the power that will drive you along. Typical electric bike batteries make about 350–500 W of power (that's about 35–50 volts and 10 amps), which is about a quarter as much as you need to drive an electric toaster. In theory, you could use any kind of battery on a bicycle. In practice, however, you want to use something that stores lots of power without being too heavy—or you'll be using half your power just moving the battery along! That tends to rule out heavy lead-acid batteries like the ones that start cars, though some electric bikes do use them. Lightweight lithium-ion batteries, similar to those used in laptop computers, mobile (cellular) phones, and MP3 players, are now the most popular choice, though they're more expensive than older rechargeable battery technologies such as nickel-cadmium ("nicad"). Typical batteries will give your bicycle a range of 10–40 miles between charges (depending on the terrain) and a top speed of 10–20 mph (which is about the maximum most countries allow for these vehicles by law). You can extend the range by pedaling or free-wheeling some of the time.

In the theoretical electric bike we considered up above, we had the dynamo/motor driving the back wheel directly, simply by pressing on the tire. Most electric bikes work a different way. They have compact electric motors built into the hub of the back or front wheel (or mounted in the center of the bike and connected to the pedal sprocket). Take a look at the hub of an electric bike and probably you'll see it's much fatter and bulkier than on a normal bike. You can read more about how these motors work in our main article about hub motors.

Photo: Left: The hub motor of an electric bike. Right: If you took off the casing, this is the kind of thing you'd see. It's a simple brushless motor from a PC cooling fan, but it works in broadly the same way as a bike's hub motor. There's a static part made up of four electromagnet coils (left) and a rotating part (right) made from a permanent magnet (the gray ring) that clips onto it. When the coils are energized in sequence, they generate a magnetic field that makes the permanent magnet and fan spin around. At a glance, a hub motor looks much like an ordinary bicycle hub, but look closer and you'll find it's a lot more bulky.

Hub motors aren't the only way to power electric bicycle wheels. If you've ever watched a mouse scampering around inside an exercise wheel, you might have wondered if you could drive a wheel electrically, in a similar way, with something that pushes against the inside of the rim. A company called GeoOrbital has developed an ingenious mechanical equivalent that can be used to power conventional bikes—and here's a simplified illustration of how it works. It has a motorized drive roller (red) that presses against the inner rim, powered by a battery pack (orange) that sits snugly inside the wheel. Two guide rollers (blue) mounted on a tensioned framework (green) take the place of the conventional arrangement of spokes. According to GeoOrbital, you can fit one of its wheels to a normal bike in just 60 seconds. 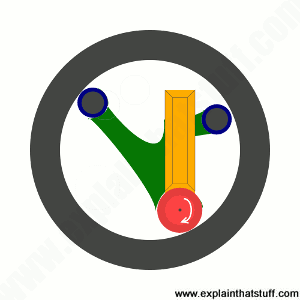 The frame of an electric bike also has to be slightly different. The main part of the frame (the bit that supports your weight) is usually made from lightweight aluminum alloy: the lighter the frame, the lighter the weight of the bike overall, and the further it can travel before you need to recharge the batteries. The spokes on the wheel also have to be stronger than the thin spokes on a traditional bicycle. That's because the electric motor in the hub spins the wheel with a lot of turning force (known as torque) and, if the spokes were ordinary lightweight ones, they could bend or buckle. 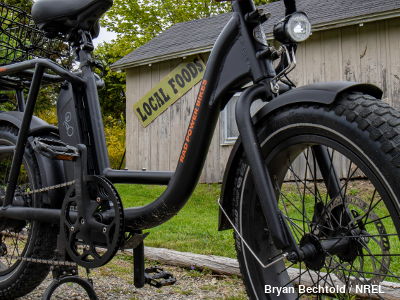 Photo: The sturdy aluminum alloy frame of a RadRhino electric bike. It's essentially a power-assist bike, driven by a 250-watt geared hub motor on the back wheel, and has a range of up to 72 kilometers (45 miles) per charge. Photo by Bryan Bechtold courtesy of NREL. (NREL photo id#139967)

Some electric bikes claim to use a neat trick called regenerative braking. If you start pedaling the bicycle or going downhill, the spinning wheels turn the electric motor in the hub in reverse and start charging up the batteries. In practice, regenerative braking is nowhere near as useful on an electric bicycle as it is on an electric train or car. An electric bike has much less mass and velocity than either a train or car, so it never gains (or loses) anything like as much kinetic energy when it starts and stops. You'd have to go down an awful lot of hills to charge up the batteries completely and that's usually not practical. And what's the point in pedaling the wheels simply to charge the battery? You might as well have bought an ordinary bicycle to start with!

There are two main kinds of electric cycle, broadly known as full-power and power-assist, and they differ in the way they're powered by the electric motor: 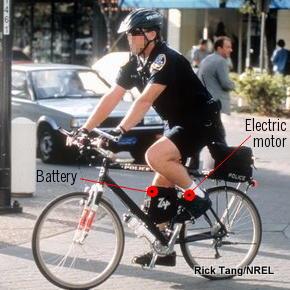 Photo: Zap Electric's power-assist kit turns a conventional bike into an electric one. There's a bolt-on DC electric motor (weighing just over 3kg or 7lb) just above the back wheel, behind the police officer's foot, pressing against the tire and driving it by simple friction. The motor's powered by a compact lead-acid battery (weighing about 5.5 kg or 12 lb) inside a protective nylon bag. This kit adds quite bit of weight to the bike, but gives extra range and speed when needed. Photo taken in Santa Rosa, California by Rick Tang courtesy of NREL. 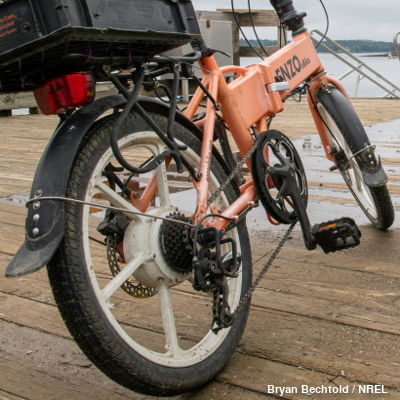 How environmentally friendly are electric bikes?

There's no question that electric bikes are far better for the environment than petrol-powered car engines. But that doesn't mean they're completely perfect. Making and disposing of batteries can be very polluting. Not only that, but an electric bicycle is still using energy that has to come from somewhere. You may think you're using clean green power, but the electricity you use for getting about might have come from a filthy old, coal-fired power plant or one driven by nuclear energy. (If you're lucky, of course, it might have come from solar panels or a wind turbine!) 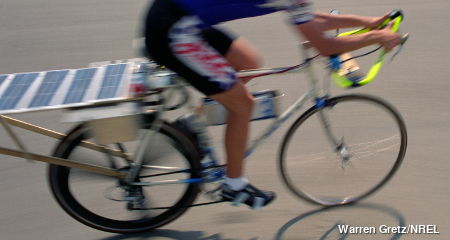 Photo: Could solar power be the future of electric bicycles? The large solar panel mounted over the back wheel of this experimental bike powers an electric motor connected by a chain drive to the back wheel, helping the rider when he doesn't feel like pedaling. Using clean, green solar power would remove the problem of having to charge electric bikes with electricity generated from fossil fuels—and help to extend their range significantly. Photo by Warren Gretz courtesy of US DOE/NREL (NREL photo id#17807).

Electric bikes are nowhere near as environmentally friendly as ordinary push bikes, but nothing is ever perfect—and, as people often say, "the perfect is the enemy of the good." Electric bikes are certainly a step in the right direction. If everyone used them to get about instead of cars, global warming might be less of a problem, and the world would be a far cleaner and healthier place! 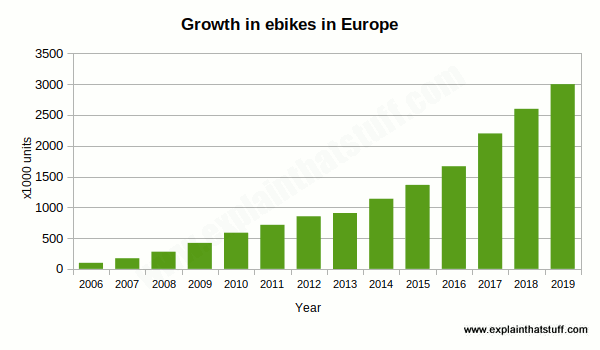 Chart: Electric bicycles are rapidly becoming popular. This chart shows the growth in sales of what the manufacturers refer to as "electric power-assisted cycles (EPACs)" in European countries over the last decade. Several million electric bikes are sold in Europe each year, which represents about 10 percent or so of total European bicycle sales. What this chart doesn't reveal is that the bikes are much more popular in some countries than others: four countries account for about 70 percent of all the sales (Germany, 36 percent; the Netherlands, 16 percent; Belgium, 10 percent; and France 8 percent). Data source: CONEBI (Confederation of the European Bicycle Industry).

The oldest patent for an electric bike I've been able to find at the US Patent and Trademark Office is this one, by Ogden Bolton, Jr. of Canton Ohio, which was filed in September 1895 and granted three months later. 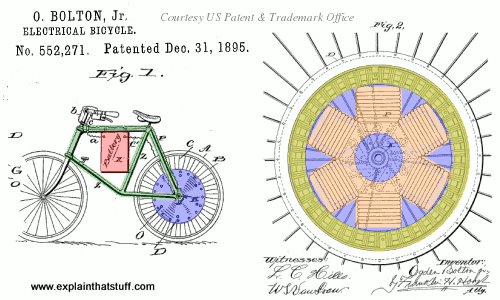 Artwork: One of the first electric bicycles. Two artworks from US Patent 552,271: Electrical Bicycle by Ogden Bolton, courtesy of US Patent and Trademark Office. Please note that I've colored the original artwork and edited it slightly to improve clarity.

You can see from these original diagrams that it bears an amazingly close resemblance to modern electric bikes. In the general picture on the left, you can see there's a hub motor on the rear wheel (blue), a battery suspended from the frame (red), and a simple handlebar control to make the thing stop and go. In the more detailed cutaway of the hub motor on the right, you can see there's a six-pole magnet in the center (orange) bolted to the frame and an armature (made from coiled wire, yellow) that rotates around it when the current is switched on. It's quite a hefty motor even by modern standards; Ogdon mentions "a heavy current at low voltage—for instance, to carry one hundred amperes at ten volts." So that's 1000 watts, which is about twice the power of a typical modern bike hub motor.