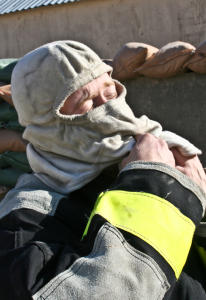 It's a racing driver's worst nightmare. You come down the straight at over 200mph (300 kph), a tire blows out, and you skid off into the crash barrier. You survive the crash but the energy of the impact generates enough heat to make your fuel tank explode. Suddenly, the car that could have carried you to victory has turned into a fireball. You manage to escape, but now there's another terrifying threat: your overalls catch fire! Fortunately, you're wearing an inner body-suit made of an amazing flame-resistant material called Nomex®. So, as you pelt from the car, the fire goes out all by itself. Shaken but unharmed, you owe your life to an piece of amazing chemical technology. Let's take a closer look at how Nomex works and some of the other things it can be used for!

Photo: A soldier puts on a Nomex® hood and a flameproof suit. Photo by Ryan C. Matson courtesy of US Army.

Nomex® is the brand name for a heat- and flame-resistant textile made by the DuPont™ chemical company. Technically, it's called a synthetic aromatic polyamide polymer (and, in the original Nomex patent, it's referred to as a "polycarbonamide"), but let's not get bogged down with jargon . What does that really mean:

In short, what we have in Nomex is a man-made textile whose ring-like monomers are bonded together into tough, long chains to make immensely strong fibers. Break Nomex up and sort it into its atoms and you'd have four neat piles of carbon hydrogen, oxygen, and nitrogen. 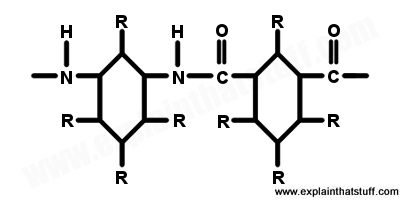 Artwork: The chemical structure of Nomex. It's a polymer built by repeating this ring-based unit (monomer) over and over again.

Aromatic polyamides such as Nomex are often called aramids for short. Kevlar® (another DuPont textile) is also an aramid, but with a slightly different chemical structure. If you're interested, the full chemical name of Nomex is poly (m-phenylenediamine isophthalamide), while Kevlar is poly (p-phenylenediamine terephthalamide); Nomex is a meta-aramid (m-aramid) polymer while Kevlar is a para-aramid (p-aramid) polymer. 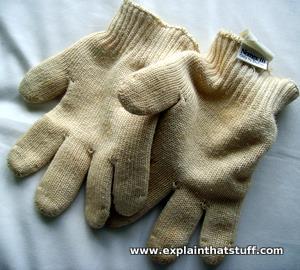 Photo: A pair of Nomex® gloves like these could make nasty oven burns a thing of the past.

Aramids are made in a two-stage process. First, the basic polymer is made by reacting together organic (carbon-based) substances to form a liquid. In the second stage, the liquid is spun out to make solid fibers, which can then be woven into textiles or converted into sheet form.

Nomex generally comes in three kinds. It's either used by itself (as 100 percent Nomex), blended with up to 60 percent Kevlar, or blended with Kevlar and some anti-static fibers. In this last form, it's known as Nomex III.

Two superb properties of Nomex make it a perfect protective material for race-car drivers. Although Nomex burns when you hold a flame up to it, it stops burning as soon as the heat source is removed. In other words, it is inherently flame resistant. Just as important, the thick woven structure of synthetic fibers is a very poor conductor of heat. It takes time for heat to travel through Nomex; hopefully by that time, you're away from the flames and out of danger. In the original Nomex patent, five samples of the material were compared with five similar samples of cotton (the control) in a basic flame test. The cotton samples caught fire in just 2 seconds and burned for 13–430 seconds; the Nomex ignited much more slowly (after about 4 seconds) and stopped burning after a mere 5 seconds when the flame was removed.

Apart from high heat resistance and flame retardance (it doesn't melt or drip), the tough, woven structure of Nomex is extremely strong and doesn't react with water. 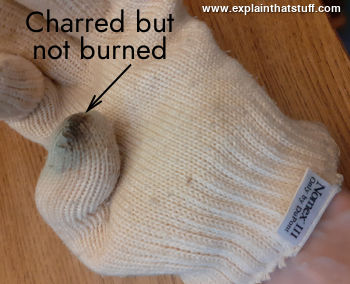 Photo: Nomex® doesn't really burn. When I applied a match to my finger, wearing these gloves, the Nomex III blackened and charred but didn't actually catch light. Phew!

What is Nomex used for? 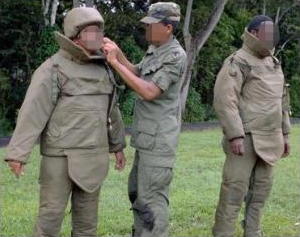 Photo: Ready for battle: soldiers put on body armor made from Kevlar and Nomex and used by explosives experts. Photo by courtesy of US Army.

Nomex is best known as a barrier to fire and heat. Apart from race-car drivers, it's worn by astronauts, fire-fighters, and military personnel. It's also widely used in more mundane ways, such as in my household oven gloves. In sheet form, heatproof Nomex finds many uses in automobiles, including high-temperature hoses and insulation for spark plugs.

But Nomex isn't just useful for protective clothing. The molecular structure that stops heat passing through stops electricity flowing through it as well. That means Nomex is an extremely poor conductor—almost a perfect insulator, in fact. Nomex, made into the form of a paper sheet or board, is a superb insulating material for all kinds of electrical equipment, from motors and generators to transformers and other electrical equipment. For these applications, Nomex is often laminated with Mylar® (polyester film) to make a stronger, tougher insulating material that works at high temperatures without the individual layers coming apart. Two-ply Nomex-Mylar laminate is called NM; three-ply is known as NMN (where the Nomex goes either side of the Mylar); and four ply is NMNM.

Like Kevlar, Nomex is both very strong and very light, so it's often used in aerospace applications. Nomex sheet is widely used to make the honeycomb reinforcement inside helicopter blades and airplane tail fins.

Photo: Nomex in robots: For NASA, Nomex is literally out of this world: it's a material they used on the Pop-Up Flat Folding Explorer Robot (PUFFER), a planet-crawling rover, designed for extreme places like Mars, that folds itself out like a piece of hi-tech origami. PUFFER's body is wrapped in Nomex to protect it from extreme temperatures and heat. Photo courtesy of NASA/JPL-Caltech.

What are the alternatives?

Photo: Left: Turn Nomex gloves inside out and you can see how very thickly woven they are. Although they look much like ordinary woollen gloves, wool alone could never give such amazing heat protection. Right: Inspect the label carefully and you'll see this is actually Nomex III, which is roughly 95 percent Nomex, 5 percent Kevlar, and a little carbon fiber to reduce static.

There are other heat, flame, and fire-resistant materials apart from Nomex. Some of the more notable synthetic alternatives include:

Often, these various materials are used in blends, sometimes with other protective materials such as composites and ceramics. 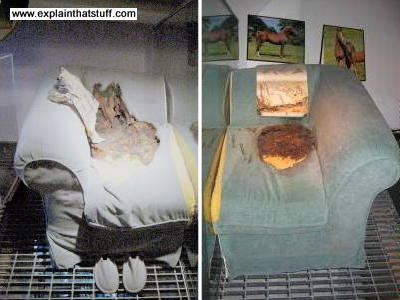 Photo: Nomex isn't the only fire-retardant fabric. Textiles used to cover chairs are often made from fire-resistant polyesters and other materials. This simple demonstration in Think Tank (the science museum in Birmingham, England) shows very clearly how fabrics like these can save lives. On the left, we have a chair made from ordinary fabric. A cigarette or match burn sets the fabric alight very quickly and gives off toxic fumes. Had this fire been left to burn, the whole chair (and the rest of the room) would have been completely destroyed. On the right, a chair made from fire-retardant fabric burns much slower. Often the fire goes out before too much damage is done.

The credit for this excellent invention goes to Dr Wilfred Sweeny (1926–2011), a Scottish-born scientist working at the world-famous DuPont laboratory in Wilmington, Delaware that also spawned nylon and Kevlar. While researching polymers, he developed one with with particularly good thermal properties that could be woven into a very tough fiber. Since Nomex was introduced in 1967, it has saved the lives of countless firefighters, pilots, soldiers, industrial workers—and, of course, racing drivers! Although Fred Sweeny earned 23 patents for other various other innovations in polymer chemistry, and played a major role in the development of Dacron® (polyethylene terephthalate, another bestselling DuPont polyester), it's for Nomex that he'll be best remembered.

Nomex, Kevlar, Mylar, Dacron, and DuPont are trademarks or registered trademarks of E. I. du Pont de Nemours and Company.

Twaron is a registered trademark of Teijin Aramid B.V. LLC.