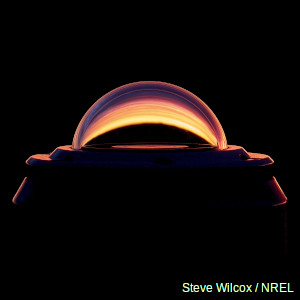 They say the Sun shines on the righteous—and if you want to know precisely how righteous you are, you'd better invest in a pyranometer! Widely used by weather and climate scientists, these strange looking instruments measure the amount of sunlight hitting Earth's surface at a particular place and time. How do they work? Let's take a closer look!

Photo: Sunrise seen through the glass dome of a pyranometer. Photo by Steve Wilcox courtesy of US Department of Energy/National Renewable Energy Laboratory (US DOE/NREL).

What is a pyranometer and what does it do? 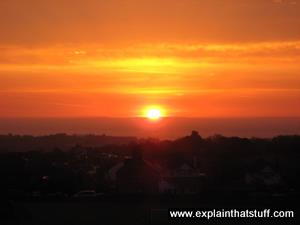 Unless you're lucky enough to live in a tropical paradise, you probably see quite a bit less of the Sun than you might like. Earth orbits the Sun and, at the same time, spins around on a tilted axis, so we get variations in sunlight across our planet each hour of the day and each day of the year. That's essentially what gives us our seasons and climate.

Now suppose you had the job of comparing how much sunlight different places receive. How would you go about it? You could lounge about in the Sun all day in different places and see how brown you get, but unless you wear copious amounts of sunscreen, that will be very dangerous—and it's not exactly scientific! What about rigging up a small solar panel to an electricity meter? You could carry the panel round the world with you, measure how much electricity it generates in each place, and use that to compare the amount of sunlight.

Very roughly speaking, this is what pyranometers do—although they work in a much more precise and scientific way. What they measure is the solar radiation falling on a horizontal surface in watts (the amount of energy received each second) per square meter. Technically that's known as insolation. 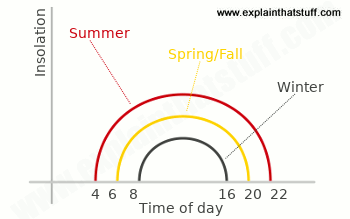 Chart: How insolation varies at different times of day during the year. There is obviously most sunlight in summer (red) and least in winter (gray), with a moderate amount in fall/autumn and spring. The total solar energy (the area under the curves) is much greater in summer both because the days are longer and because the sun is "higher" in the sky (the insolation is greater).

Sunlight may look yellow, but it actually consists of a very broad spectrum of electromagnetic radiation, ranging in wavelength from about 280 nanometers (nm, which are billionths of a meter) up to about 4000 nanometers. This includes both visible "white light" (the familiar rainbow spectrum ranging from red and orange through to indigo and violet) and invisible electromagnetic radiation, including ultraviolet (UV) and infrared (IR). Although our eyes can't see much of this light, pyranometers do their best to detect as much of it as possible, because it all counts as sunlight. 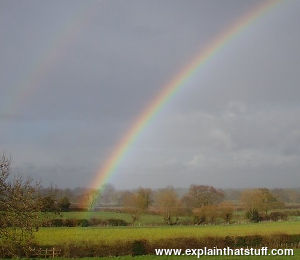 If you're good with your Greek, you'll know that pyr means fire, ano indicates something up above, and meter suggests measurement, so a pyr-ano-meter measures "fire from up above"—sunlight, in other words. Broadly speaking, there are two different kinds of pyranometers. Although they do the same job, they work in very different ways. Thermopile-type pyranometers measure sunlight from the heat it generates; chip-type pyranometers measure sunlight from the electricity it generates.

A typical, laboratory-grade pyranometer is essentially just a thermopile (a collection of thermocouples, perhaps 50–100 in the best instruments) mounted on a black carbon disc, which generates electricity according to how hot it gets (how much solar radiation falls on it).

That's not quite all there is to it, however! Scientists are serious people who like to be sure that when they measure something, other things aren't getting in the way and spoiling their data. So pyranometers have some extra features. Most noticeably, there's a dome made from one or two layers of ground and polished optical glass or acrylic plastic covering the thermopile, which eliminates air movements and dirt that might affect the measurements (the curved outer surface also ensures any raindrops fall away quickly). A small, replaceable cartridge of silica gel (or other dessicant) inside the pyranometer absorbs any dew. Since a pyranometer typically sits outside in an exposed position, its case has to be made from something like toughened, rustproof, anodized aluminum. Usually, there's a built-in spirit level so you can be sure your pyranometer is flat (though some are designed to be used on inclined surfaces as well). 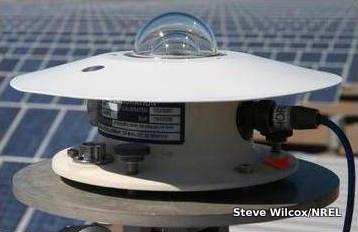 Photo: A pyranometer quietly going about its job, measuring solar radiation. Note the double glass in the dome and the weatherproof cable coming out of the side that carries electrical signals, corresponding to the strength of the solar radiation, out to a computer. Photo by Steve Wilcox courtesy of US Department of Energy/National Renewable Energy Laboratory (US DOE/NREL).

When sunlight falls on a pyranometer, the thermopile sensor produces a proportional response typically in 30 seconds or less: the more sunlight, the hotter the sensor gets and the greater the electric current it generates. The thermopile is designed to be precisely linear (so a doubling of solar radiation produces twice as much current) and also has a directional response: it produces maximum output when the Sun is directly overhead (at midday) and zero output when the Sun is on the horizon (at dawn or dusk). This is called a cosine response, because the electrical signal from the pyranometer varies with the cosine of the angle between the Sun's rays and the vertical.

Photo: The house of the rising sun: an array of pyranometers measure the slowly increasing insolation. Photo by Tom Steffel, US Department of Energy/National Renewable Energy Laboratory (US DOE/NREL), image#18059.

How does a thermopile-type pyranometer work?

Here's what you'll find inside a really high-quality pyranometer that uses a thermopile to measure solar radiation: 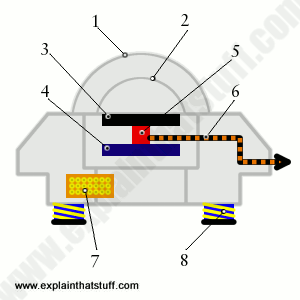 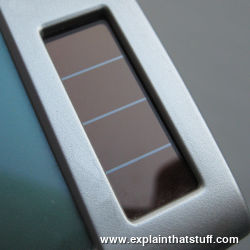 Photo: You can use small photovoltaic solar cells like these to measure solar radiation.

Not all pyranometers use thermopiles. You can also get less sophisticated (and considerably cheaper) solar-cell pyranometers, based on light-sensitive semiconductor chips, that give more approximate measurements. The best thermopile pyranometers are designed to respond more or less equally to a substantial band of incoming light wavelengths (this is sometimes described as a flat wavelength response). Lesser, chip-based pyranometers don't do this. Their main drawback is that they don't respond linearly to a broad band of solar radiation but only to a limited range of wavelengths; so while a high-quality pyranometer might measure wavelengths from 280–2800 nanometers, a solar-cell version might respond to wavelengths in a much narrower band from about 300–1100 nanometers (with a peak in the infrared region from around 800-1100nm). But unless you're making really detailed measurements in a laboratory, that may be perfectly fine for your needs.

How does a chip-type pyranometer work?

Here's the inside of a typical, inexpensive pyranometer that uses a light-sensitive chip instead of a thermopile. This is a drawing of an actual pyanometer designed in the 1990s by inventors David and Arthur Beaubien as a low-cost instrument for measuring, specifically, the ultraviolet part of the spectrum. It uses a simple photodiode (a light-sensing chip) mounted in a sealed housing, with filters and a phosphor above the photodiode restricting the light passing through to the precise part of the spectrum we want to measure. I've colored and numbered the original diagram and simplified the explanation to make it easier to follow. 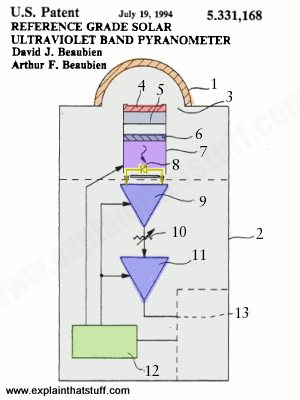 Artwork: Drawing from US Patent #5,331,168: Reference grade solar ultraviolet band pyranometer by David and Arthur Beaubien, courtesy of US Patent and Trademark office.