You are here: Home page > Tools, instruments, and measurement > Weights and balances
Advertisement 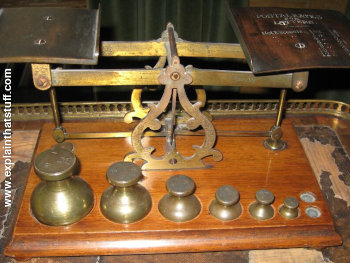 How many times do you weigh things in the course of a day? If you're on a diet, chances are you stand on scales each morning to check your progress. If you're having breakfast, you might weigh out what to eat by filling a bowl with cereal. If you're sending a letter or a parcel, you probably take it to a Post Office to have it weighed. When you buy things from a grocery store, the price you pay for most goods will be based on their weight. In some countries, even the money in your pocket is based on a system of weight. (British and Irish pounds, for example, originally weighed exactly one pound.) With so much of our world driven by weight, accurate ways of weighing are very important. But what is weight, exactly, and how do you measure it in practice? Let's take a closer look!

Photo: The simplest way to weigh: an old-fashioned set of brass weights and a balance for measuring letters before you post them. The balance works like a see-saw, swinging from side to side until the weight on the left pan equals that on the right pan. You put your letter on one pan and put some weights on the other until the needle in the middle exactly balances (points straight down). These scales are on display at the National Trust's historic Saltram House in Devon, England.

Before we go any further, let's be clear about the difference between weight and mass. Most of the time, when we're talking about weight, we actually mean mass. Kilograms, pounds, stones, ounces, and grams are all units of mass, not weight. So what is the difference?

Mass is the amount of matter something is made from. Big things are generally more massive than small ones. If you have a lump of iron or copper and take it to different places on Earth (or even the Moon) to measure it's mass, you'll always get the same result.

Weight is a measurement of how much the force of gravity acts on a given amount of mass. The force of gravity varies slightly all over Earth so, while your lump of iron has the same mass, its weight varies: it might weigh a little bit more in Bangladesh than it does in Tibet. What about on the Moon? Gravity is about one sixth the strength on the Moon as it is on Earth. So things weigh only one sixth as much on the Moon as they do on Earth, even though their mass is exactly the same in both places. Why are things heavier on Earth? Essentially because Earth is so much more massive than the Moon. It attracts objects with more force—and that gives them more weight. 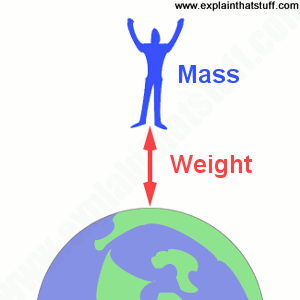 If you use metric (and SI) units, you measure mass in kilograms (kg) and weight in newtons (N) and convert mass to weight by multiplying by approximately 10 (because the strength of gravity on Earth is roughly 10 newtons/kg). Most of the time, it's acceptable to refer to weights in mass units (such as kilograms or pounds) because any mass on Earth converts to a weight in pretty much the same way. You never hear people say things like "I weigh 700 newtons" even though—scientifically speaking—they really should!

How much would you weigh on Mars? 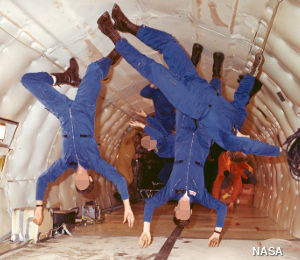 Photo: What you weigh depends on where you are, as these astronauts are finding out in a training plane. It simulates weightlessness by making deep dives toward Earth. Photo courtesy of NASA on The Commons.

The Exploratorium website has a neat little page where you can calculate your weight on other worlds. It works by taking your weight on Earth and adjusting it according to using the strength of gravity on each planet (or star), which we can calculate from the mass of the planet and its size (its radius). As you might expect, a more massive planet, such as Jupiter, will attract you much more powerfully than Earth, simply because there's more "stuff" to pull on your body. But it's not quite that simple, because you have to remember that Jupiter is also a larger planet than Earth (it has a greater radius). That will tend to make it attract you less, because if you stand on the surface of Jupiter, there's a bigger distance between your body and the planet's center: you're further away so Jupiter's gravity has less pull on you. Taking these two opposing factors into account gives us the strength of gravity on the surface of each planet (or star). Here are a few to start you off!

How can you measure weight?

You can find something's weight using an instrument called a balance.

Old-fashioned pan balances (sometimes called scales) literally involve balancing two scale pans with known weights in one pan and the item you want to weigh in the other. In a slightly different kind of balance called a steelyard, you hang a pan from one end of a metal arm and move a weight along the other end, much like a see-saw, until you find a balance point. Steelyards were invented in Roman times but are still used today. Physicians and nurses still use them to weigh small babies. 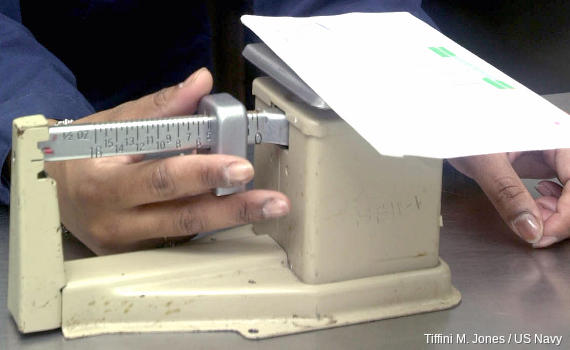 Photo: Ways to weigh: using a steelyard to measure the weight of letters. You put the letters on the pan, move the sliding weight until the arm is horizontal, and then read the weight off the scale. Photo by Tiffini M. Jones courtesy of US Navy and Wikimedia Commons.

Many cooks use spring balances instead of pan balances and weights. You place an item to be weighed on the top of a moving platform and it pushes downward, stretching or compressing a spring inside and turning a pointer around a dial (you can see exactly how it works in the box down below).

Even more convenient than spring balances are electronic balances that give weights instantly as a digital readout. Scales people use to weigh themselves often work this way. You stand on a platform and your weight, pushing down, compresses a pressure sensor called a piezoelectric transducer. This is a kind of crystal that makes an electric current when you squeeze it: the harder you push, the more current it makes. So the heavier you are, the more current flows in the transducer. An electronic circuit connected to the transducer measures the current and converts it into a "weight" measurement (actually a mass measurement) in kilograms, pounds, stone, or any other unit you select. 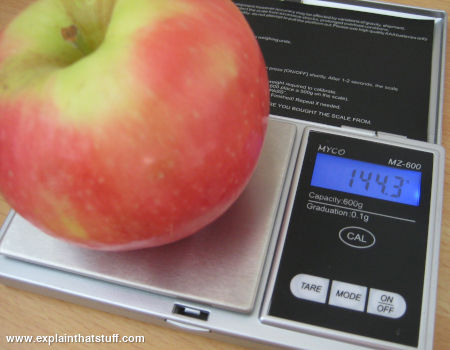 Photo: More ways to weigh: an electronic balance like this measures accurately with a piezoelectric sensor and shows the result on a digital display. You can see that this apple weighs 144.3 grams. Pressing one of the buttons instantly converts that measurement into ounces.

Large things (such as trucks) are obviously much too big to weigh with ordinary scales or balances, but it's still important to weigh them to check, for example, that they're not too heavy to carry on airplanes or ships. Trucks are weighed by driving them onto metal roadways called weighbridges, which are supported by hydraulic rams. The heavier the truck, the greater the force on the rams and the harder they have to push upward to balance the truck's weight exactly. You can calculate the truck's weight from the hydraulic pressure of the rams. If you know the truck's curb weight (kerb weight or unladen weight), which is often painted on the side of the vehicle, you can easily calculate the weight of its cargo by subtraction.

Scales measure how much something weighs—and they do it by measuring how much force exists between the object you're weighing and planet Earth. Although scales measure force, they give you measurements of mass in kilograms, grams, pounds, or whatever. This can be a bit confusing, but it's acceptable because (as explained above) weight and mass are connected in a simple way and are often used interchangeably in everyday life.

Suppose you have some simple kitchen scales like these. If you're compulsively curious (like me) and take off the pointer and the dial (without smashing them to bits and wrecking your scales in the process), you'll see the mechanism lurking inside. When you load up the pan (or push down on it with your hand), a hidden platform inside the scales slides downward, stretching a powerful spring as it does so. The heavier the object, the more gravity pulls it down, and the more it stretches the spring. So far so good, but how do we turn that spring stretch into a numeric measurement? 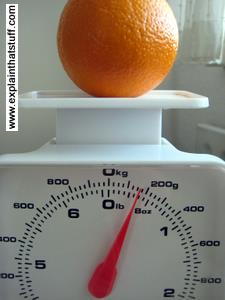 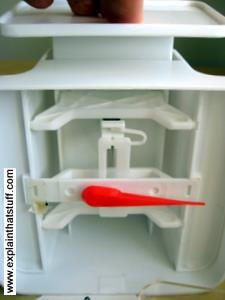 The moving platform at the front is actually a kind of rack and pinion gear. The platform is the rack and the pointer of the scale is the pinion. As the platform (rack) moves downward, the pinion (the small gear to which the pointer is attached) rotates. You can see that happening in the photo on the left below. In the photo on the right below, at the very back of the scales, you can see the thick powerful spring that stretches as the platform goes down. The mechanism is perfectly linear: if you put twice as much weight on the scales, the spring stretches twice as much, the rack moves twice as far, and the pinion and pointer turn around the dial twice as much. 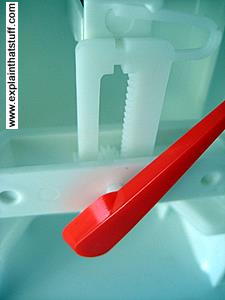 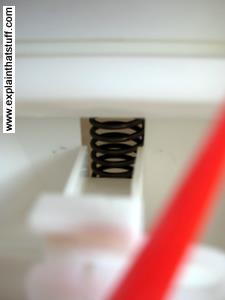 Aren't pounds a measurement of force not mass?

From time to time I receive emails from people (usually in the United States) who read this article and grumble that I have defined pounds as a measurement of mass; to them, pounds are a measurement of force. Officially, this is wrong: the leading organizations charged with maintaining measurement standards define pounds as measurements of mass: the US National Institute of Standards and Technology (formerly the US National Bureau of Standards) has defined the pound as a measurement of mass (1 pound = 0.453kg) for over a half century and its current Handbook (44-2013) lists ounces, pounds, and stones as units of mass, as does the UK's National Physical Laboratory. All the weighing machines I photographed for this article have scales marked in kilograms and grams (on one hand) and stones, pounds, and ounces (on the other), showing the equivalence between them: these are all units of mass. 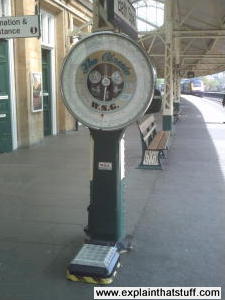 Photo: These traditional platform scales are on a railroad station in Bath, England. They can weigh objects up to 192kg (24 stones) —enough to hold about two average adults. Like most scales, they have two dials that can give you a measurement in either metric units (such as kilograms) or Imperial ones (pounds and stones).

It's true that in old-fashioned Imperial measurements the pound could be used to measure force and some people occasionally differentiate by using the terms "pound (mass)" (lb-m/lbm) or "Avoirdupois pound" and "pound-force" (lb-f/lbf). Engineers, in particular, are fond of talking about pounds as units of force. However, if you're a scientist it's best not to get into this game; the pound is a very confusing unit with unnecessarily confusing historical baggage and, like all Imperial units, is best avoided in modern science. Stick to metric SI units (kilograms for mass and Newtons for force) and everything will make much more sense.

To find out more, I recommend you read Wikipedia's articles on Pound (mass) and Pound (force). Note how very confusing the old-fashioned pound (force) system is once you start using it.