You are here: Home page > Science > Center of gravity
Advertisement 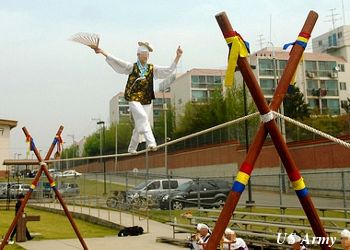 What goes up must come down—that's one way of understanding gravity. We think of gravity as a force that pulls things downward (toward Earth's center), but it doesn't always work like that. Sometimes gravity can make things turn and topple over, especially if they are high up and unbalanced. Tightrope walkers understand this better than anyone. Tiptoeing over the high wire, they often teeter and wobble from side to side just to entertain us, yet they hardly ever fall off. Instinctively understanding the physics of forces helps them staying firmly on the wire. If, like them, you understand a simple concept called center of gravity, you'll find balancing is child's play!

Photo: A tightrope walker has an instinctive command of physics. You might think the fan she's carrying is just a funny little touch, but it's more important than it looks: it gives the walker an easy way to redistribute her weight and quickly correct any wobbles that could send her to the ground. Photo of Eoreum (also called Jultagi), Korean tightrope dancing, courtesy of United States Army Garrison Public Affairs.

What is "center of gravity"?

Throw a ball in the air and gravity pulls it straight back down. Not everything moves like this when gravity acts on it. Most objects are not nice, neat shapes like balls. That means gravity acts on them in more complex ways. Even so, all objects behave as though their mass (the stuff they're made from) is concentrated at a point called their center of gravity. A simple object like a ball has its center of gravity in a very obvious place: right at its center. But in a more complex object, like your body, the center of gravity is slightly higher than your waist because there's more weight in the top half of your body than in the bottom half.

Photo: Why does center of gravity matter? If you want to fly an aircraft safely, having a balanced load is important. 1) This giant C-5 Aircraft is having its center of gravity calculated in a special weight and balance hangar at Edwards Air Force Base in California. Photo by Derek Lawrence. 2) A helicopter carrying a side load has its center of gravity shifted to the left, as we look at the picture. The pilot has to adjust the pitch of the rotors so they create more down-force on the left to compensate. Photographer unknown. Both photos courtesy of Defense Imagery. 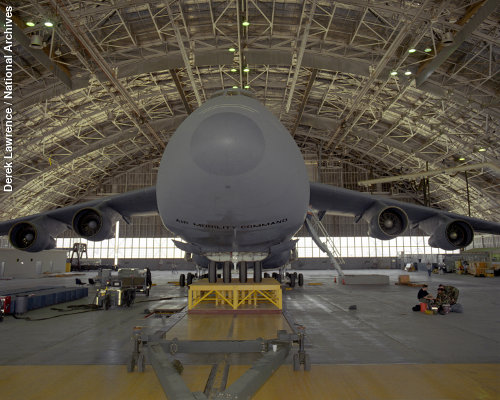 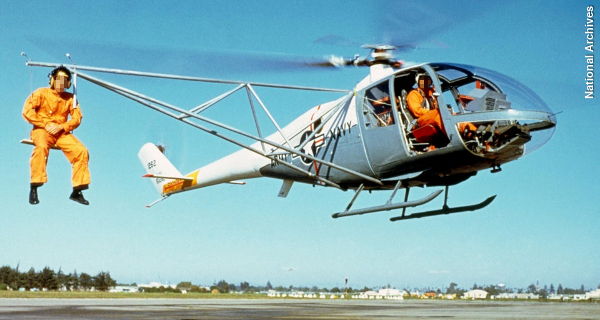 Why do tall things topple over?

Thinking about center of gravity helps us answer questions like this. Stand up straight, then try leaning over to one side. Very quickly you'll reach a point where your whole body feels like it's about to topple over. You're not actually moving but turning about your ankles. Your head moves faster than your knees. In fact, your whole body turns around your ankles like a wheel. You might think gravity is something that pulls things downward, but here it's making you turn in a circle! The taller you are, the more you'll turn because your whole body is acting like a lever, helping the force of gravity to turn you around.

To see how that works, try opening a door by pushing the handle with one finger. Easy, isn't it? When a force pushes something that can freely pivot (like a door on its hinges), that thing will turn instead of moving. Now try opening the same door by pushing with one finger near the hinge. This time it's much harder. The shorter the distance between the force and the pivot point, the harder it is for the force to make something turn. Wider doors are easier to open than narrower ones because the entire door acts like a lever, multiplying the force you use when you push on the handle. In exactly the same way, it's much easier to make something tall topple over than to topple something that's close to the ground.

Why does gravity make your body tip over?

Imagine your body is not a single, solid mass but a huge sack of potatoes standing upright. Gravity pulls on the whole sack, but it also acts on each potato separately, pulling each one downward. When you lean over to one side, the "potatoes" at the top of your body work like a lever, making your top half turn and topple about your ankles. The more you lean, the bigger the lever effect at the top of your body—and the more likely you are to topple.

There's another way of thinking about your weight. Yes, your body is a bit like a sack of potatoes. But it's also a bit like one giant potato, weighing as much as you do and concentrated in an infinitely tiny point, somewhere in your middle—roughly where your stomach is. This is your own, personal center of gravity. As long as your center of gravity is more or less above your feet, your body will always be balanced and you won't tip over. But start leaning to the side, and everything changes. Your head is one of the heaviest parts of your body—like a giant potato perched right on top. If you lean to your left, your center of gravity is no longer directly above the midpoint of your feet. The more you lean, the more torque (turning force) this creates and the more likely you are to topple over. Gravity makes your whole body rotate about your ankles like a finger pushing on a door handle. 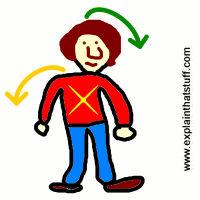 Artwork: As long as your center of gravity (yellow star) remains roughly above the midpoint between your feet, you stay upright even during complex movements like walking and dancing. But if you move the top of your body too much in one direction, you'll create a turning force (green) that will tend to make you rotate. To stay upright, you'll need to move another part of your body and create a balancing force (yellow arrow) to cancel out the original turning force.

What's the best way to balance?

The lower your center of gravity, the easier it is to keep your balance. If you're sitting on a chair, you can lean over more than if you're standing up. With your center of gravity low, you can lean further to one side or the other without creating enough turning force to tip you over. That's why racing cars (and military vehicles like Humvees) are designed with very low centers of gravity: the lower they are to the ground, the less risk there is that they'll tip over, no matter how fast they go. 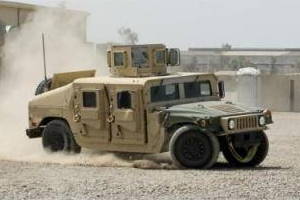 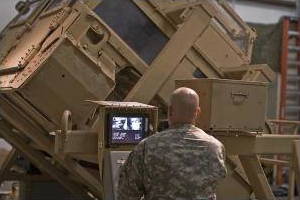 Photo: 1: The US Army's Humvee (High Mobility Multipurpose Wheeled Vehicle or HMMWV) has a low center of gravity, so it can corner at high speed, in difficult terrain, with much less risk of toppling over. 2: Even so, soldiers are trained to escape from a tipped-over Hummer using this hydraulically powered simulator called HEAT (HMMWV Egress Assistance Trainer). It rotates a mock-up of the Hummer's passenger compartment so soldiers can practice getting out in a variety of challenging conditions, including underwater. Hummer photo by Sgt. Alex Snyder, HEAT photo by Sgt. Travis Zielinski, both courtesy of US Army.

Tightrope walkers use a slightly different trick to master their center of gravity. If you've ever watched a tightrope walker, you'll have noticed they never simply walk across the rope. Some stretch their arms out or carry a long stick or an umbrella. Others crouch down or bend their knees. Still others ride bicycles with weights dangling some way beneath them. These balancing aids help to give tightrope walkers more control over their center of gravity. If they can keep their center of gravity directly above the rope at all times, they will never fall off. If they start moving to one side, a turning force will start to topple them in that direction. So they have to quickly move part of their body to the other side to make a turning force in the opposite direction and restore their balance.

Photo: It's easy to fall off a normal bicycle, where your weight balances on a very thin wheel and even slight movements from side to side can send you toppling. It's almost impossible to fall from a recumbent bike (one like this, where you lie back), because your center of gravity is almost at ground level. Photo by Charles M. Bailey courtesy of US Army.

Inertia (the tendency still objects have to stay still and moving objects to keep moving) helps too. A tightrope walker weighs quite a lot. That means they have a certain amount of inertia and it takes quite a bit of time for their body to move to one side or the other. If they feel themselves tipping, they have enough time to move another part of their body (or a stick or umbrella they're carrying) to the other side. That produces a tipping force in the opposite direction that keeps them balanced. Looking at a tightrope walker who's momentarily stationary, you might think no forces are acting—but you'd be wrong. Gravity acting on a walker's left arm will try to make him tip to the left, while the weight of his right arm will tip him to the right. The walker stays perfectly upright, perfectly motionless when all the different turning forces are exactly balanced and canceling one another out.

How does it help to know about center of gravity? 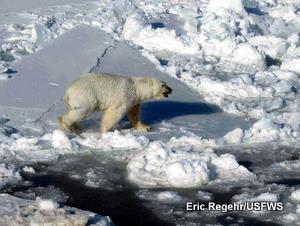 Photo: Bears do sometimes walk on their back legs, but it's quicker, easier, and safer to walk on all fours—because they have a lower center of gravity and can't topple over. Picture by Erich Regehr courtesy of US Fish & Wildlife Service.

If you're a skeptic, you might think science is full of useless bits of information you never really need to know, but center of gravity isn't one of them. Last winter, the lane where I live froze over completely and turned to a sheet of ice. What's the best way to walk down a frozen street? Assuming you don't have mountaineering boots, the safest way to do it is to get down on all fours and crawl along, like a polar bear, on your hands and knees. You might get wet or dirty but you won't tumble over and break your neck. If you make your center of gravity very low, it's impossible to fall. 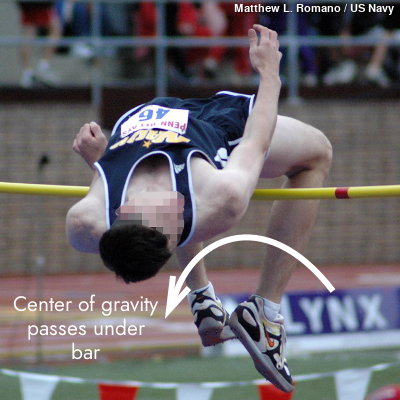 Photo: Low center of gravity: the high-jumping technique called Fosbury Flop, shown here, works by keeping your center of gravity so low that it goes underneath the bar. Photo by Matthew L. Romano courtesy of US Navy.

Thinking about center of gravity is also key to playing many sports effectively. Anything that involves balance—pretty much every sport from figure skating to surfing—involves thinking about where your weight is and how to move it quickly without using too much energy or losing control. You've noticed how tennis players plant their feet wide apart? And how high jumpers do weird things curling their bodies up and round the pole? All that kind of thing is based on understanding center of gravity—and putting it to practical use!