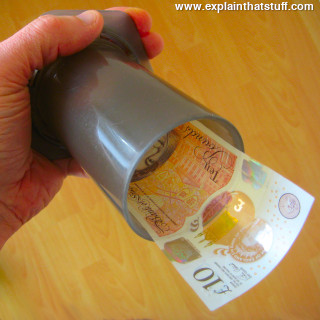 If you enjoying reading the Sherlock Holmes detective stories, you'll know there's every chance you'll meet a deadly assassin looming on the next page, ready to strike at a moment's notice with his poison-tipped blowpipe. These age-old weapons are classic examples of pneumatic technology: they use the power of compressed air—blowing hard on one end of a pipe fires a missile at high speed from the other end. In the late-19th century, around the same time the Sherlock Holmes tales were first published, blowpipe technology became very popular for sending messages and small objects down much longer pipes linking remote parts of large buildings. In our modern age of fiber-optics and the Internet, you might think this rather quaint "pneumatic transportation" is a thing of the past—but you'd be wrong. Thousands of hospitals, factories, banks, department stores, and other places still rely on pneumatic tube transport to move medicines, cash packets, and other small items with speed, security, and efficiency. One drive-through McDonald's even uses a system like this to deliver burgers to its customers! So how exactly do pneumatic tubes work? Let's take a closer look!

Photo: Need to send cash quickly and securely to another part of your building? You could use a pneumatic transport canister like this. It's made from a tough plastic called polycarbonate, which protects whatever you pack inside. Once the tube is loaded, you screw a cap on the end and place it in the transport tube to be sucked or blown to its destination roughly 5–6 times faster than a messenger could carry it.

What is pneumatic tube transport? 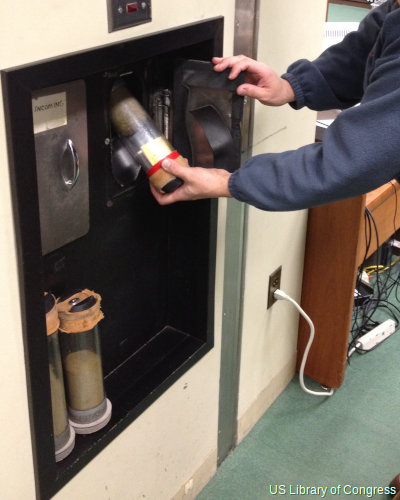 Photo: Pneumatic tubes have been used at the US Library of Congress since the late 19th century to send requests between readers and the stores where archive materials are held. The system might seem archaic, but it's tried, tested, and efficient—and still used in parts of the Library to this day. Note the two metal doors opening up for incoming tubes (left) and outgoing tubes (right, and currently being loaded by the operator). You can also see two spare tubes standing at the bottom. Read more about the system in A Series of Tubes from the Library blog, December 16, 2011. Photo courtesy of US Library of Congress.

Suppose you run a large department store full of checkouts (cash desks) that are taking money from customers all day long. To reduce the risk of theft, it's a good idea to collect that money every so often and remove it to a place that's more secure before you deposit it in the bank. You could have a cashier walk around all the checkouts in turn, but that takes time and it makes the cashier vulnerable to robbery. Also, some checkouts will take money more often than others, so it's generally better if the checkout operator dispatches money at regular intervals as it suits them.

How does pneumatic tube transport work? 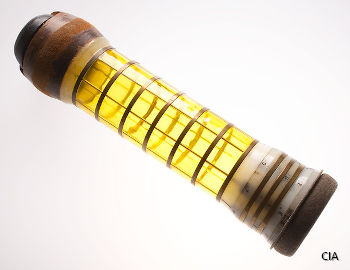 Photo: Lamson tubes like this were used in the CIA's giant, 50km (30 mile) pneumatic tube network between 1962 and 1989. Photo courtesy of CIA published on Flickr.

For simplicity, let's assume we're linking one checkout with the cashier's department. The checkout has a large metal box called the sending station with a door that opens onto a tube. Some systems have doors that lock with keys or open with numeric keypads and PIN numbers; others are unsecured. The tube (a pipe made of something like PVC plastic or a strong lightweight metal such as aluminum) runs all the way to the cashier's department, often only a short distance but sometimes up to 600m (~2000ft) or so. At the cashier's department, the tube connects to a more sophisticated box called the receiving station, which may also have a lockable door. This is sometimes also called the powered station, because it provides the air power that moves packages back and forth. It's essentially the same as the sending station, but it has a compressed air pump attached that can either suck air from the tube or blow air into it according to which way down the tube packages need to be sent. Often, the sending and receiving stations have chimes, ringers, or flashing lights to signal when a package has just been received.

Most of the time the receiving station will be collecting cash packages from the checkouts so it will be set to receiving mode (also called vacuum mode). This means the compressor will be working like a vacuum cleaner so it sucks air along the tube from the sending station. If someone wants to send cash from the sending station, they simply load it into a sturdy cylindrical, plastic canister (only slightly smaller than the tube and very snugly fitting), place it in the tube in the sending station, and close the door. When properly loaded, it blocks and seals the tube. Now as the compressor sucks on the tube, it creates a partial vacuum in front of the canister that sucks it all the way along until it reaches the receiving station, where it can be unloaded. Canisters can be sent in the opposite direction simply by setting the compressor to blow air along the tube in the opposite direction (behind a canister, pushing it along); department stores often send small change back to checkouts that way. 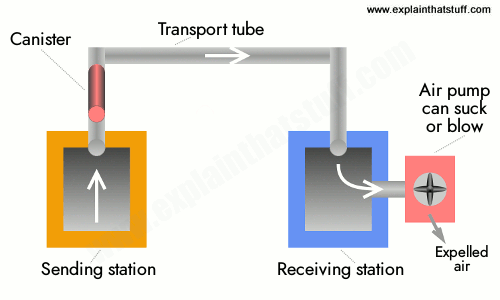 Artwork: How a pneumatic transport system works: a tube links the sending and receiving stations. The air compressor pump at the receiving station can suck or blow air. When it sucks, it pulls canisters along the tube toward it; when it blows, it pushes the canisters in the opposite direction.

Just as a vacuum cleaner is limited by the suction power of its electric motor, so pneumatic transport tubes are limited in what they can carry, how quickly, and how far. Typically, canisters are about 5–15cm (2–6 inches) in diameter and 20–30cm (~8–12 inches) long, made of a toughened plastic such as polycarbonate, and have rubbery bumpers at the ends to provide a good air seal and prevent noise as they travel down the tubes. They unscrew at one end to carry small items weighing up to about 2kg (~5lbs) or so at speeds of up to 10m (33ft) per second. That equates to about 36km/h or 22mph—or roughly 5–6 times faster than a person can walk.

Pneumatic tube systems are a fast, simple, secure, and reliable way of transporting small objects relatively large distances across a building or (using underground or overground pipes) between buildings on the same site. They can move things up, down, or sideways and, because they're pneumatic, provide a soft, air-cushioned ride for fragile items (many systems use air-cushioned brakes or bumpers that bring arriving canisters slowly to a rest at the receiving station). Since they remove the need for a person to carry things, systems like this save time and money and tend to pay for themselves quite quickly. They also offer secure connections between different parts of a building, reducing opportunities for theft and accidental damage in transit.

If they have a disadvantage, it's that the tubes that link stations ideally need to be planned into a building's infrastructure when it's first designed (perfectly possible for something like a new hospital or department store); it's harder (though far from impossible) to install a complex system with many sending and receiving terminals into an existing, older building. 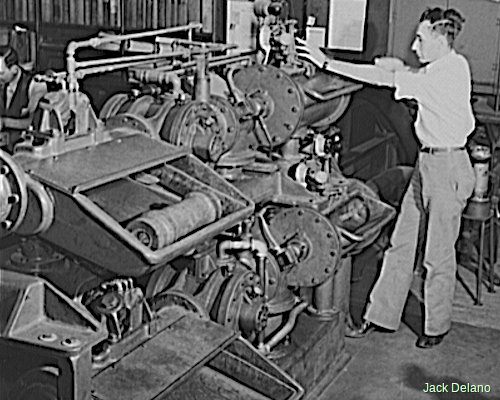 Systems like this are widely used in hospitals and department stores, so those are the places to keep your eyes peeled if you're hoping to spot pneumatic tubes in action. You're most likely to notice them near checkout desks, especially when someone sends a bundle of money off to the cashier's department. Look out for a box (with or without a key lock or numeric keypad) with a tube coming out of the top and disappearing into the ceiling up above. You're unlikely to use a system like this directly unless you work in a bank, store, or hospital, although some pharmacies and banks do use pneumatic tubes to deliver items securely to self-service, electronic kiosks.

Think of tube transport and you generally think of cylinders shooting down round pipes, but it's possible to send other-shaped containers (such as flat, flexible document wallets) down flattened pneumatic "tubes" as well. Lamson patented a system like this for sending flexible envelopes back in 1930 and numerous other, similar systems have been developed since then for transporting things like checks and banknotes. Typically, the containers (made from fiber-board or plastic) can be securely sealed, but have extra hinged flaps on their outsides (a bit like pockets or wings) that catch in the air stream, allowing them to be blown effectively through the tube. One of the big advantages of systems like this is that bulky transport tube containers aren't needed, and (in places like shops where the transport of items is mostly in one direction), you don't have to keep returning a limited supply of empty containers to the stations where they came from. They can generally also be used in more confined spaces. The main drawback is the risk of valuable items getting stuck or damaged.

Looking to the future, Tesla electric car pioneer Elon Musk has proposed using a scaled-up version of tube technology to transport people between cities at speeds of about 1100 km/h (700 mph). Known as Hyperloop, the idea has certainly captured people's imagination, and regularly features in the tech press. Whether it will ever come to fruition remains to be seen; some recent predictions suggest it might not be around till 2040, at the earliest. If it sounds crazy, it's worth remembering that numerous 19th-century engineers (including English engineer Isambard Kingdom Brunel) tried to build atmospheric railways, in which the passenger cars are pushed or pulled by differences in air pressure. None succeeded—steam engines proved cheaper, more flexible, and more reliable—but the idea was reborn in the late 20th century, and a handful of successful, small-scale atmospheric railroads do now operate around the world.

And if you think Elon Musk is a genius for coming up with the idea, don't forget that we've been here before. Two centuries ago, way back in 1829, artist William Heath drew this very similar idea as part of an elaborate joke called "The March of Intellect." It's a vacuum transport tube speeding people on little carriages from London, England to Bengal, India!

There are lots of technical patents covering all kinds of variants on pneumatic tube transport; here's just a small selection.