You are here: Home page > Electricity and electronics > Oscilloscopes
Advertisement 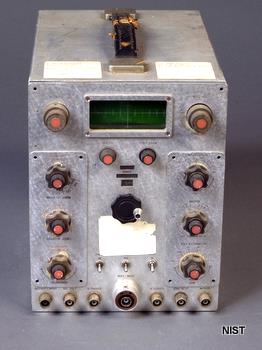 Blip... blip... blip... blip... woooooooooooooooo.... "Quick nurse, she's crashed... the paddles!" No TV hospital drama would be complete without the sight and sound of a heart monitor by a patient's bedside. We've all watched those brightly lit traces leaping up and down—but have you ever stopped to wonder exactly how they work? Heart monitors like this are based on a kind of electronic graph-drawing machine called an oscilloscope, which works a lot like an old-fashioned television set. Let's take a closer look at these handy instruments and find out how they work!

Photo: Blast from the past! Imagine trying to build a compact oscilloscope before miniature electronic components were readily available. That was the challenge that scientists at the National Bureau of Standards and the US Navy's Bureau of Aeronautics (BuAer) faced back in the 1950s before they could get their hands on transistors. What they came up with was this remarkably compact machine, a Subminiaturized Radar Indicator Oscilloscope, which dates from 1954–1956. Photo courtesy of National Institute of Standards and Technology Digital Collections, Gaithersburg, MD 20899.

What is an oscilloscope?

Photo: A typical chart/graph. This one shows the steady growth of e-commerce in recent years. The x-axis (time) runs horizontally across the page; the y-axis (revenue) runs vertically up the page. By courtesy of US Census Bureau.

You've almost certainly drawn charts in school and seen them in newspapers. Many of them show how a certain quantity of something (like a heart rate, the price of a corporation's shares, or a country's exchange rate) changes over time: they have the quantity plotted in the vertical direction (known as the y-axis) and the time period plotted in the horizontal direction (the x-axis). The trouble with charts like this is that they can take ages to plot—unless, of course, you happen to be an oscilloscope! It's a handy little gadget that draws charts automatically using signals you feed into it from probes hooked up to an electronic circuit, a scientific instrument, or a piece of medical monitoring equipment.

What can we use oscilloscopes for? 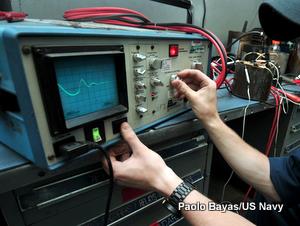 Photo: A US Navy electrician uses an oscilloscope to check the performance of an electric motor onboard an aircraft carrier. Photo by Paolo Bayas courtesy of US Navy.

How an oscilloscope works

A traditional oscilloscope works in almost exactly the same way as a traditional (cathode-ray tube) television; indeed, you'll sometimes see oscilloscopes referred to as cathode-ray oscilloscopes or CROs. In a TV, electron beams are made to scan back and forth across a screen coated on the back with special chemicals called phosphors. Each time the beam hits the screen, it makes the phosphors light up. In less time than it takes to blink an eye, the electron beams sweep across the entire screen and build up the picture you can see. Then they do it all over again. And again. And again. So you see a moving picture instead of a still one. (Take a quick look at our television article for a diagram showing you how all this works in practice.) In an oscilloscope, the electron beams work the same way but instead of building up a picture they draw a graph. When you watch a line being drawn on an oscilloscope screen, what you're actually looking at is an electron beam wobbling up and down!

Here's something to note: the electrical signals feeding into the x and y connections effectively become the x and y values on your on-screen chart. Since there's a one-to-one correspondence between these two things, a traditional oscilloscope is an analog device. (Another way of looking at it is to say the trace on the screen is an analogy of the thing you're studying or measuring.) 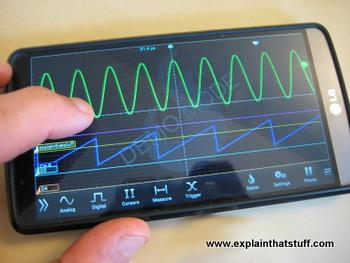 Photo: An oscilloscope draws a trace (graph) of some quantity (plotted on the y-axis) that varies with time (plotted on the x-axis). One common pattern you'll see is this smoothly undulating, snake-like up-and-down trace, which is called a sine wave or sinusoidal wave (green upper line). Another quite common pattern is a sawtooth wave (the blue stepped trace shown underneath the sine wave). This is a demo screenshot from Oscium, a plug-in oscilloscope that replicates some of the features of a traditional oscilloscope on your smartphone or tablet.

How does an oscilloscope actually draw a trace? Imagine you are an oscilloscope! Imagine holding a pencil in your hand at the zero point on a piece of graph paper. Now suppose your hand is strapped to two electric motors, one of which can move it by precise amounts in a vertical (y) direction (that is, up and down the page), while the other one can move it in the horizontal (x) direction (across the page from side to side). The motors are connected to electronic circuitry that can sample signals of different kinds.

For starters, let's suppose we connect the x-circuit to an electronic quartz clock. Each time the clock ticks, it sends a signal to the x motor that moves your hand slightly to the right. So, over a period of a few seconds, your hand moves gradually to the right drawing a horizontal line as it goes. Now suppose we connect the y-circuit to some sort of electronic instrument that detects a person's heartbeat. If the x and y circuits are connected at the same time, your hand will move across the page, as before, but jump up vertically each time the heart beats, drawing the classic heartbeat trace you see in TV hospital dramas. Replace the pencil and the graph paper with an electron beam and a TV screen and you can see exactly how an oscilloscope draws its traces. Each time a signal comes in through the y circuit, the electron beam jumps up. All the while, a time signal is making the trace move from left to right along the horizontal (x) axis. 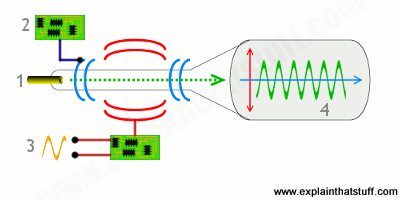 Artwork: How an oscilloscope draws a sine wave. 1) Inside the cathode-ray tube (CRT), the electron gun (yellow) fires a beam of electrons (green dots) toward the phosphor screen. 2) With no signal connected to the scope, a timing circuit powers electromagnet coils (blue) that make the electron beam sweep slowly across the screen from left to right (effectively powering the x-axis of the graph). 3) When you feed an undulating signal (orange) into the oscilloscope's probes, a different circuit powers a perpendicular pair of coils (red) that make the beam sweep up and down. 4) Acting together, the coils make the electron beams sweep out an up-and-down, wiggling trace (a sine wave).

How do you use an oscilloscope?

It's simple! You connect the signal you want to study to the y-circuit and use the x-circuit (sometimes called the time base) to study how the signal varies over time. Alternatively, you can connect a second signal to the x-circuit and then study how the y and x signals vary together. With the oscilloscope switched on and plugged into a signal, you'll see a trace forming against the background of the on-screen "graph paper" (which is known as a graticule, marked off in squares called divisions).

If the trace is too small to see properly, you need to adjust the calibration of the x and y axes—just like using a different sized scale when you're plotting a chart on paper. If you turn the Time/Division control (often marked Time/Div or Secs/Div), you alter each x-axis division of the screen so the incoming signal takes more time to move across. For example, if a heartbeat is making a pulse every second and the screen is set to one second per division, you'll get a pulse appearing on each division (line) of the screen. If you turn the Time/Division control so it's set to 0.5 second per division, the pulses will spread out to take up twice as much horizontal room (because one second of time is now represented by two divisions of the screen). You can adjust the y-axis control (often labeled Volts/Division or Volts/Div) in the same way. Generally, the idea is to make the trace spread out and fill the entire screen so you can use the graticule to make accurate measurements. 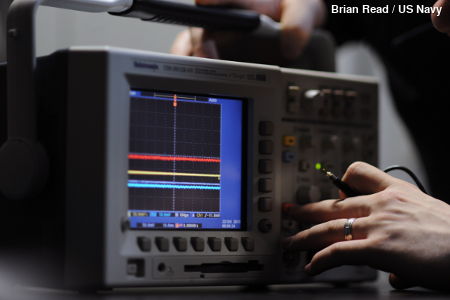 As we've already seen, oscilloscopes were originally based on cathode-ray tubes (CRTs), which are relatively bulky, heavy, power-hungry, unreliable, and expensive. Just as CRT televisions have now largely been replaced by more convenient LCD technology, so many CRT oscilloscopes have been replaced by flat-panel LCD screens. Instead of using moving electron beams to draw traces, LCD oscilloscopes use digital electronics to draw a trace instead—effectively mimicking what's happening with the older technology. LCD oscilloscopes tend to be much cheaper and more compact: you can even fit them in your pocket! 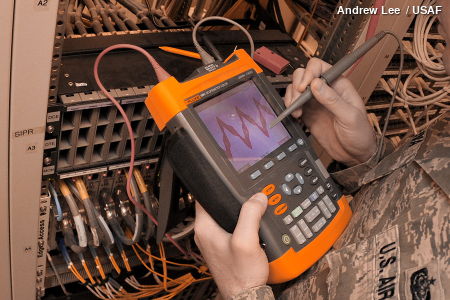 Photo: Digital oscilloscopes are much smaller and more portable than old-fashioned analog ones. This one's a handheld Fluke Scopemeter being used to check communication signals in the electronic equipment rack behind. Photo by Andrew Lee courtesy of US Air Force.

Unlike traditional oscilloscopes, which use entirely analog technology (displaying varying signals on the screen that correspond precisely to the signals you feed into them), LCD oscilloscopes are generally digital: they use analog-to-digital converters to turn incoming (analog) signals into numeric (digital) form and then plot those numbers on the screen instead.

Since your computer, tablet, or smartphone already has a CRT or LCD display, there's no actual need to buy an oscilloscope anymore for occasional hobby use. Companies such as Cleverscope sell inexpensive, plug-in oscilloscopes (with USB connectors or equivalent leads for mobile devices) that simulate the circuitry in a traditional oscilloscope and display a trace on your PC or mobile screen. How convenient is that!

Search your favorite app store and you'll find quite a few hits for "oscilloscope," ranging from simple demonstrations of signal traces up to fully functional scopes that take signals from plug-in probes. The basic apps use the microphone as their very crude signal source. With a USB adapter cable for your cellphone and a plug-in probe, your mobile becomes an instant, pocket oscilloscope! Oscium makes the best-known plug-in oscilloscope probe for the iPhone/iPod Touch and Android, and doubtless they're available from other manufacturers too. 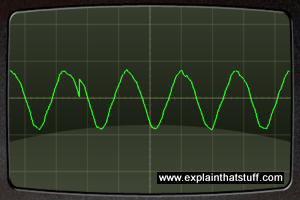 Photo: Here are screenshots of two typical oscilloscope apps. 1) The very basic Oscillo app (available from the usual app stores) draws a simple amplitude trace of whatever sound signal is currently feeding in through the microphone of your mobile device. It's a great way to demonstrate to children how sounds of different tone and pitch make waves of different shape. Here, I'm humming a single tone into my mobile to generate an approximate sine wave—and I can vary the loudness and pitch and watch what happens to the trace as I do so. What happens if I whistle or hum, or try to make my voice sound like a trumpet or a flute? It's a great introduction to oscilloscopes and a much more interesting, interactive way of learning about waves than you'll find in traditional science books. 2) The slightly more sophisticated Sound Oscilloscope app (from Denis Bolshoiden, for Android) can draw the same amplitude trace or alternatively (as shown here) a frequency trace (FFT) of a sound signal from your microphone, so that adds an extra dimension to the activity.