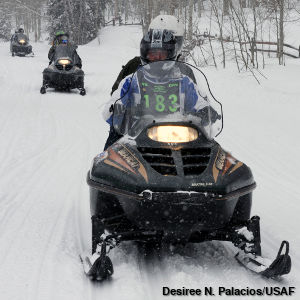 Snow problem? 's no problem if you have a snowmobile! If you live somewhere warm, like California, your only chance of seeing one of these brilliant little machines is in wildlife documentaries or James Bond films. If you live nearer the Arctic, in Alaska or northern Quebec, snowmobiles (often called snow machines) will be as familiar to you as motorcycles are to people living further down south. Given how useful they are, it's hardly surprising that engineers spent much of the early 20th century trying to develop the perfect machine for speeding over frozen terrain. The small, light, modern snowmobile finally appeared in the 1960s thanks to pioneering Canadian engineer Joseph-Armand Bombardier, who named his machine the Ski-Doo®. So how do these funky little snow bikes actually work? Let's take a closer look!

What is a snowmobile?

Think about an ordinary motorcycle: you have a heavy engine in the center with the rider balanced on top of it and two narrow wheels with rubber tires just in front and behind. Now in theory you can ride a machine like this through snow, providing the snow is soft enough to compact as you move over it (and you can get some grip) and not so hard and frozen that it's turned to super-slippery ice. In practice, motorcycling on snow and ice is incredibly dangerous and best avoided: steering fluctuates between tricky and impossible and there's a high risk your bike will slide right out from under you. The problem is that relatively little of your bike is actually touching the road—just two tiny patches of rubber under the front and rear tires—and that's simply not enough to give you good traction and grip. 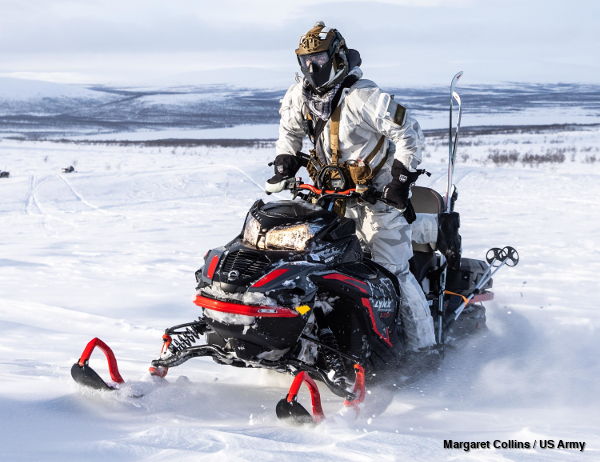 Photo: A Lynx Commander snowmobile makes light work of this frozen terrain in Norway. Note how far apart the front skis are compared to a skier's: this gives a snowmobile stability and a lower center of gravity, which helps to stop it tipping over. Photo by Margaret Collins courtesy of US Army and DVIDS.

If you had to rebuild a motorcycle for snowy terrain, what would you change? You might fit skis at the front to spread your weight and give reasonable steering. A wide, rutted track at the back would give you plenty of speed and lots of grip, no matter what kind of terrain you had to deal with. What you'd end up with would be something like a modern snowmobile. It's very similar to a motorcycle, with the engine in roughly the same place and power transmitted to the rear track through a drive belt.

Artwork: A snowmobile gets much more traction in snow than a motorcycle using a large, wide track with deep rutted treads. A belt-drive and clutch system transfers power from the engine (in the center of the machine) to the track at the back. Compare this with Bombardier's early, 1944 snowmobile design (below) and you'll see that the basic idea hasn't changed very much.

What are the parts of a snowmobile?

Photo: A Ski-Doo snowmobile parked up in Alaska. Photo by Airman Laura Max courtesy of US Air Force with added numbering and annotation by explainthatstuff.com.

There's lots more to a snowmobile than just an engine, some skis, and a track. Here are a few of the more obvious bits and pieces:

Who invented the snowmobile?

Think "snowmobile" and you probably think "Ski-Doo" and "Bombardier," but invention tends to be more of a process than a sudden event—and, as with other inventions like cars and computers, quite a few other people tried their hand at creating mechanized snow craft.

Back in 1908, Alvin Lombard made a motorized steam tractor on skis, which he named the Lombard Log Hauler.

In 1913, Edward L. Schuh was granted a patent for this "runner attachment for automobiles whereby the vehicle may be utilized in winter as well as in summer and may be propelled under its own power with out burning out tires or any excessive strain on the engine." 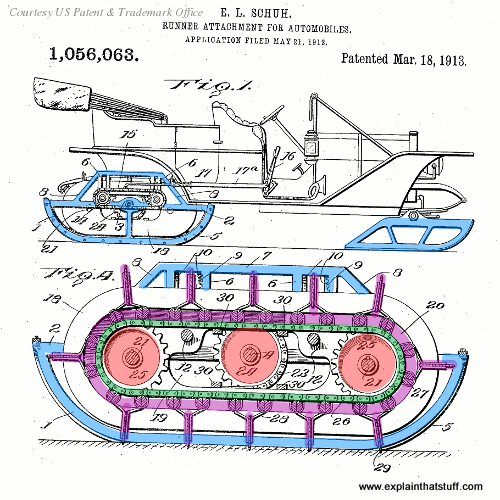 Artwork: Edward Schuh's snow-runner attachment for the Model-T Ford from his 1913 patent. Top: The general idea was to stick an ordinary car on skis (blue). Bottom: The car moved itself using what Schuh called "propellers," which consisted of sprocket wheels (red) turning a chain (green) with blades (purple) attached that dug into the snow and ice as the propellers turned around. Artwork from US Patent 1,056,063: Runner attachment for automobiles by Edward L Schuh, March 18, 1913, courtesy of US Patent and Trademark Office (with coloring added by us for clarity).

Other handy inventors also experimented with turning cars into snowcraft, including a New Hampshire Ford dealer named Virgil T. White (who came up with the name "snowmobile")—and Joseph-Armand Bombardier himself, a Canadian who reputedly began tinkering with snowmobiles when he was just 15. It was 1959 when he built his Ski-Doo, which was the first, real, commercially successful snowmobile. 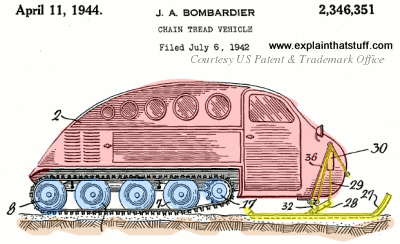 Artwork: This robust-looking snowmobile was designed by Joseph-Armand Bombardier and patented in April 1944. Much like modern snowmobiles, this one has a ski at the front for steering and a sophisticated chain-tread track system at the back. Sprockets pull the tracks around, while idler wheels in between provide suspension. The main difference between this vehicle and modern snowmobiles is the large cabin, which can seat about 12 people. Artwork courtesy of US Patent and Trademark Office (with coloring added by us for clarity).

Skis, engine, a track, and some brakes—a snowmobile sounds simple enough. Under the covers, however, there's a lot more going on. If you take a look at the 500 or so snowmobile-related patents that the leading manufacturer, Bombardier, has filed since 1944, you'll find all sorts of features you might never have thought of. For example, powering through wet or deep snow, it's quite likely the track will clog up, greatly increasing the weight of the drive mechanism and slowing you down. That was why Bombardier developed a snow-expelling mechanism in the 1960s, which consisted of spiral grooved wheels to gouge out impacted snow as the track shuffled past them. Some snowmobiles have retractable headlamps, which flip out of the way when they're not in use. Again, it sounds simple enough, but someone at Bombardier still had to sit down and design a reliable retractable head lamp assembly to make that work. As you might expect, most of Bombardier's patents relate to the track/tread mechanism, suspension, skis, and basic frame construction—the core features of a snowmobile—but it's interesting to browse through their other innovations, which cover everything from quick-release passenger seats and engine turbochargers to more mundane things like electronic engine lubricators!

How safe are snowmobiles?

Snowmobiles are great fun but, like motorbikes, they're fast and heavy machines. In a typical year, 2 million people enjoy snowboarding in North America, but around 200 of them die in accidents and there are 14,000 injuries [Source: Snowmobile injuries in North America by J J Pierz, Clin. Orthop. Relat. Res. 2003 Apr;(409):29-36.]. Now 200 deaths might sound like a lot, but we have to put that number in context. Each year, around 200,000 people die from accidental injuries, 42,000 die from falls, and 40,000 die from vehicle accidents [Source: Accidents or Unintentional Injuries, Center for Disease Control and Prevention, September 2022.]. Another study (in Wisconsin) identified alcohol consumption as a significant risk factor in snowmobile injuries and death.

Ski-Doo is a registered trademark of Bombardier Recreational Products Inc.