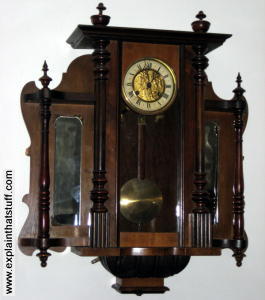 Tick tock, tick tock—that's the sound we think of when we think of clocks, even though the vast majority of modern timekeepers make hardly any sound at all. Not so long ago, virtually every clock and watch made a tick-tock noise because it was completely mechanical rather than electrical or electronic. Instead of your clock being powered by a battery, you wound it up with a key and there was a long swinging rod inside, called a pendulum, that made sure the whirring gears kept good time. So how did these old-fashioned pendulum clocks actually work? Let's take a closer look!

Photo: A compact, wall-mounted pendulum clock. On clocks like this, the swinging pendulum is very much a feature; in grandfather clocks, the pendulum is often discreetly hidden behind a door (see below).

What is a pendulum?

A pendulum is a rod hanging vertically from its top end (or a weight called a bob hanging from a string) that swings from side to side due to the force of gravity. As Italian scientist Galileo Galilei (1564–1642) discovered, the clever thing about a pendulum is that it always takes the same amount of time to make one complete swing.[1] In theory, the only thing that affects how fast a pendulum swings is its length and the strength of gravity. For relatively small swings, the time (T) it takes to make one complete swing (known as the period) is given by this little equation:

Here, l is the length of the pendulum and g is a measure of gravity's strength (what we call the acceleration due to gravity). You can see from this equation that you need to quadruple the length of a pendulum to double the time it takes to make a swing.

How does a pendulum work?

A pendulum works by converting energy back and forth, a bit like a rollercoaster ride. When the bob is highest (furthest from the ground), it has maximum stored energy (potential energy). As it accelerates down toward its lowest point (its midpoint, nearest the ground), this potential energy is converted into kinetic energy (energy of movement) and then, as the bob climbs up again, back to potential energy. So as the bob swings (oscillates) back and forth, it repeatedly switches its energy back and forth between potential and kinetic. Something that works this way is called a harmonic oscillator and its movement is an example of simple harmonic motion, though we won't go into those things here.

If there were no friction or drag (air resistance), a pendulum would keep on moving forever. In reality, each swing sees friction and drag steal a bit more energy from the pendulum and it gradually comes to a halt. But even as it slows down, it keeps time. It doesn't climb as far, but it covers the shorter distance more slowly—so it actually takes exactly the same time to swing. This handy ability (technically called isochronism, which just means "equal amounts of time") is what makes a pendulum so useful for timekeeping.

Galileo figured that out straight away and though he never actually managed to build a complete pendulum clock. he came quite close (here's a model of the 1642 pendulum clock he was designing just before his death); it was left to another brilliant scientist, Dutchman Christiaan Huygens (1629–1695), to finish the job in the 1650s. (Read more about Huygens and his clocks and see a photo of the first Huygens pendulum clock of 1656.)

“I do not make use of a weight hanging by a thread, but a heavy and solid pendulum, made for instance of brass or copper... and on this new principle, that the pendulum makes its great and small vibrations in the same time exactly, they will invent contrivances more subtle than any I can suggest...”

How does a pendulum clock work?

Suppose you want to build a clock from scratch in the simplest way possible with the fewest number of parts. You could start with a dial and some hands and move them around the face with your finger, counting seconds to yourself and moving the hands accordingly. You move the second hand once a second, the minute hand once every 60 seconds, and the hour hand once every 60 minutes (3600 seconds). Some clock! That's going to get tedious quite quickly, so what about automating things? You could mount the hands on a little axle driven by what we'll call "timekeeping gears," so that the second hand automatically turns the minute hand at 1/60 of its speed, and the minute hand, likewise, turns the hour hand at 1/60 of its speed. Then all you have to do is count seconds, turn the second hand, and the rest of the job is done for you.

But, hang on, that's still pretty tedious. What we really need is some way of powering the hands automatically. You could wrap a piece of string around the axle and attach a weight to it. As the weight falls, it will pull the axle around, turn the second hand, and that will drive the rest of the clock. The only trouble is, the weight is going to fall really quickly and the second hand will whizz around too fast so the clock won't keep time. Okay, let's introduce another set of gears—we'll call them "power gears" (to avoid confusing them with the timekeeping gears)—that will take power from the falling weight and transform it so that, as the weight falls, the second hand advances exactly one position on the dial in one second. But that still won't work because the weight is going to accelerate as it goes down, like any falling object. In other words, the clock is going to get faster and faster until the weight hits the ground with a smack!

What we need to add is a mechanism that regulates how fast the weight can fall, allowing the whole timekeeping mechanism to advance so the second hand moves one second on the dial (and only one second) in a time of one second. That's what the pendulum does. As it swings from side to side, it rocks a lever called an escapement that locks and then unlocks the part of the mechanism driven by the falling weight. (Think of it this way: the mechanism is locked and the escapement releases it so it can move—in other words, lets it escape—once per second.) It's this repeated locking and unlocking that makes the tick-tock sound you can hear. Since (in theory, at least) a pendulum of a certain length always takes the same amount of time to swing back and forth, the pendulum is what keeps the clock to time. The escapement mechanism that the pendulum regulates also (cleverly) keeps it moving back and forth by repeatedly giving it a slight nudge—an extra injection of energy to counteract friction and drag.

That's not exactly how pendulum clocks work; it's a very simplified approximation of what's going on that's reasonably easy to follow. 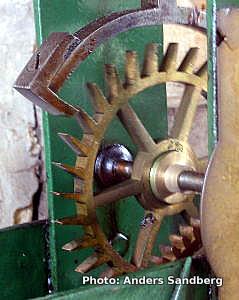 Photo: The escapement is a rocking lever that allows the gears in a clock to advance only at a certain rate, determined by the swings of the pendulum. Photo by Anders Sandberg published on Flickr in 2009 under a Creative Commons Licence.

Animation: How the escapement works: 1) The falling weight powers the clock. 2) As it drops, the weight pulls the gears around. Left to its own devices, the weight would accelerate, falling faster and faster. 3) The rocking escapement engages and disengages the gears, so they turn at a constant rate, and the clock tells accurate time. 4) The swinging pendulum rocks the escapement and sets the rate at which it moves.

A summary of how clocks work

In summary, then, the key parts of a pendulum clock are:

In practice, clocks have lots of other bits, pieces, parts, and features that horologists (master clockmakers) like to refer to—with splendid honesty—as "complications." 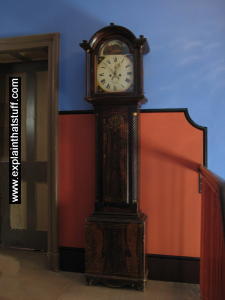 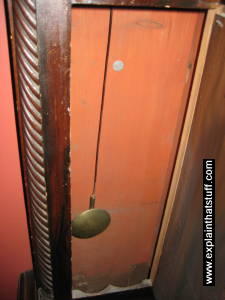 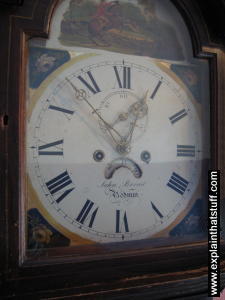 Photo: 1) When most people think of a pendulum clock, this is what they picture in their mind: a grandfather clock (also called a longcase clock). 2) Clocks like this have a long pendulum that makes only a relatively narrow sweep back and forth. 3) Grandfather clocks often have very ornate and beautifully painted dials.

Some drawbacks of pendulum clocks

Photo: One of the most accurate pendulum clocks ever made before better technologies made them obsolete. This was the official US timekeeping standard from 1904 until 1929. It was made by Clemens Riefler in Germany. Photo by courtesy of National Institute of Standards and Technology, Gaithersburg, MD 20899.

Can you see any problems with pendulum clocks? Me too! A pendulum of a certain length takes the same amount of time to move back and forth if the strength of gravity stays the same. But what if the length of the pendulum changes? That could certainly happen if it's a metal pendulum and the room temperature goes up or down (say, between winter and summer), because metals expand in the heat and contract in the cold.

Now what about gravity? We treat it as though it were a constant, but the strength with which Earth's gravitational force pulls on objects varies across the surface of our planet: it's greatest the closer you are to the center of Earth, so it gets slightly less as you climb mountains and slightly more as you get closer to sea level. That means the same pendulum clock will keep different times in New York City and Colorado, for example! And talking of sea, imagine taking a pendulum clock on a ship. What's all the pitching and rolling of the waves going to do to the neat back and forth movements of your pendulum? Not going to work very well, is it?

The first of these problems—the slightly changing length of the pendulum—is relatively easy to fix. We simply use compensating pendulums that automatically adjust ("compensate") as the temperature changes. Two early kinds were mercury pendulums (incorporating glass tubes full of liquid mercury) and gridiron pendulums (made by using two different metals, such as steel and copper, zinc and steel, or steel and brass, that cancel out one another's expansions and contractions). At the start of the 20th century, people started making pendulums from a new material called invar (an alloy of nickel and steel), which expanded very little with temperature changes and virtually solved the problem.

There's not much you can do about gravity, though, and as for taking pendulum clocks on ships, better forms of timekeeping were gradually developed that made them unnecessary. But that's another story! (You can follow it up in the "Find out more" section below.)