Everyone loves a rainbow and most people understand, at least roughly, how they work: raindrops split a beam of white sunlight into rays of colored light, bending the blueish ones more than the reddish ones to make the well-known arc in the sky. Rain, then, is a brilliant method for separating sunlight. Chemists and physicists use a similar method for separating mixtures of substances into their components, turning them into beams of particles and then bending them with electricity and magnetism to make a kind of spectrum of different atoms that are easier to identify. This technique is called mass spectrometry and it was pioneered by British physicist Francis Aston in 1919. Let's take a closer look at how it works!

What is a mass spectrometer?

Mass spectrometers are much simpler than they look—or sound. Suppose someone gives you a bucketful of atoms of different chemical elements and asks you what's inside. You need to separate out the atoms quickly and efficiently, but how do you do it? Simple! Tip your bucket into a mass spectrometer. It turns the atoms into ions (electrically charged atoms with either too few or too many electrons). Then it separates the ions by passing them first through an electric field, then through a magnetic field, so they fan out into a spectrum. A computerized detector tallies the ions in different parts of the spectrum and you can use this information to figure out what kinds of atoms were originally in your bucket. That's the basic idea, anyway. In reality, it's a bit more complex than this—there's no bucket, for a start! 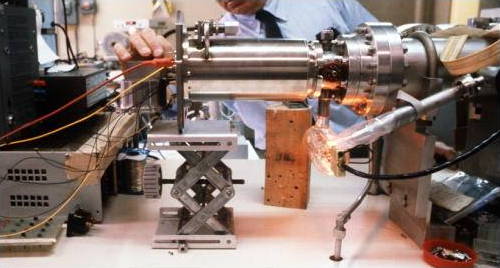 How does a mass spectrometer work? 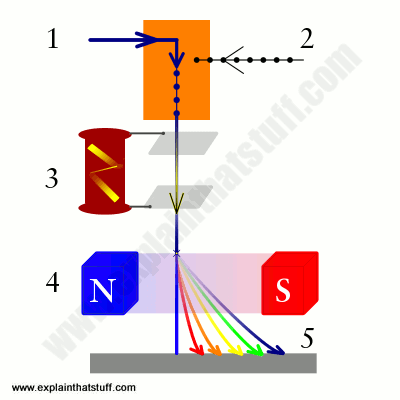 There are numerous different kinds of mass spectrometers, all working in slightly different ways, but the basic process involves broadly the same stages.

How does it work in reality? 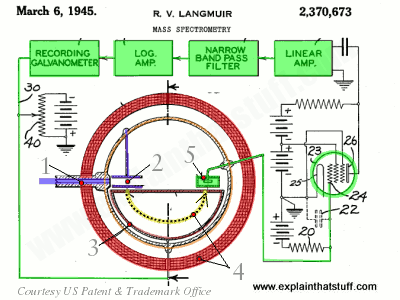 Although that's a very simplified explanation, it's not too far from what really happens. Take a look at this drawing of an early mass spectrometer designed by American electrical and electronic engineer Dr Robert V. Langmuir [PDF]. in the late 1930s and patented in 1945. I've colored it to make it easier to follow and used the same numbering as I used up above to emphasize the similarity. Here's how it works:

You can read more about this in the full patent description, (also listed in the references at the end).

What is mass spectrometry used for?

Now why would you want to go separating a beam of atoms into a rainbow? Like chromatography, with which it's often paired, mass spectrometry is an important method for identifying the atoms or molecules in complex chemical substances. The inventor of the spectrometer, Francis Aston (1887–1945), used his machine to prove the existence of many naturally occurring isotopes (atoms of the same element with different numbers of neutrons and different mass). Apart from this kind of pure scientific research, there are all sorts of everyday fields in which mass spectrometers are indispensable tools, from crime scene investigation to archaeology and from environmental science to drug design. 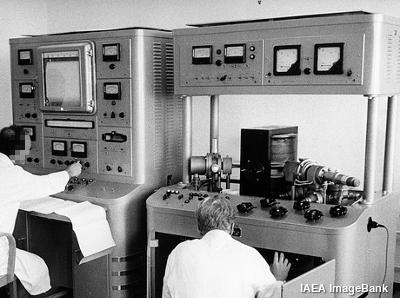 Mass spectrometers are an obvious way of investigating situations where strange chemicals suddenly appear—and figuring out exactly what those things are. Materials scientists use them to identify the precise chemical composition of samples, which can help to explain why buildings or bridges collapse unexpectedly or why engineering components have suddenly failed. Forensic science relies on being able to identify unusual substances found at a crime scene and match them precisely with similar substances found elsewhere. So, for example, if traces of explosive can be found at an airplane crash site, investigators can probably rule out mechanical failure. If detectives can go further, and trace the explosive's unique chemical signature to a particular place or person, with the help of mass spectrometry, that powerful evidence could lead to a successful criminal conviction. Security is a very closely related application, but works in a more pro-active way (aiming to prevent attacks altogether). Mass spectrometers are increasingly being used for things like baggage scanning and checking traces of chemicals found in suspicious mail packages, to identify what are termed CBRNE (chemical, biological, radiological, nuclear, and explosive) threats. And this sort of application is bound to become more important in future. 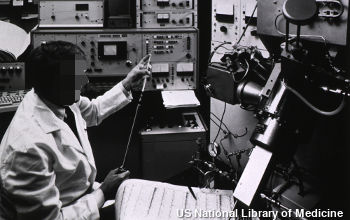 Photo: A fast atomic bombardment mass spectrometer. This one makes its ions not by bombarding atoms with electrons, but by smashing high-speed atoms into a surface to knock electrons out of them. Photo by courtesy of US National Library of Medicine Digital Collections.

More optimistically, mass spectrometers can help us design new things that make the world a better place. In biotechnology, mass spectrometers are used for studying how proteins work and for identifying viruses and bacteria much more quickly than traditional culture-based methods allow. US chemist John B. Fenn (1917–2010) won the 2002 Nobel Prize in Chemistry for jointly developing an improved form of mass spectrometry called electrospray ionization, which is used for studying macromolecules (very large and complex molecules) such as proteins. Unlike normal mass spectrometry, this technique involves turning a sample into an aerosol burst of droplets, separating it into individual protein molecules, which can then be analyzed with a mass spectrometer in the usual way. Widely used in the pharmaceutical industry, mass spectrometers can help chemists design new drugs much more quickly; among other things, they're useful for figuring out how to maintain the level of a chemical in the body for a certain period of time (which is the key to designing drugs that work effectively). Agricultural scientists who breed and genetically engineer plants use mass spectrometers to measure and maintain levels of desirable chemicals in new crops, or to study how quickly things like fertilizers (which have been radioactively labeled) are taken up from the soil. 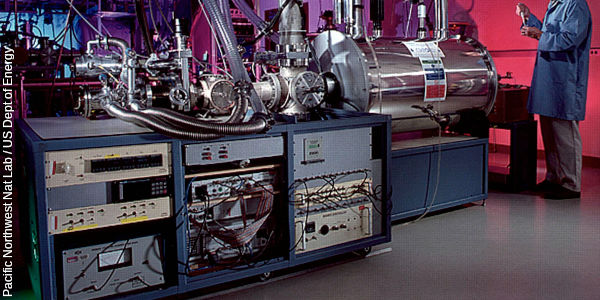 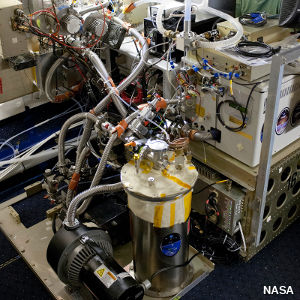 Mass spectrometers can also help us to understand our environment. We can use them to measure how quickly air and water pollution travels or to discover how fast things like pesticides break down when they're released into soil. Geologists use them to analyze rock samples for valuable minerals and to find out the precise chemical composition of oil and gas deposits. Archaeologists—human history detectives—also use mass spectrometers on soil samples, but with the aim of identifying the plant, animal, and mineral materials used in certain places hundreds or thousands of years ago.

So there's much more to a rainbow—at least a rainbow of atoms—than you might think!

This small selection covers recent advances in mass spectrometer technology and the sorts of things they can be used for in everyday life:

If you're looking for a detailed technical description of how mass spectrometers work, patents are a really good place to start. Here are a few I've picked out from Google Patents: