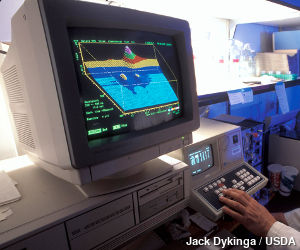 Most of us have got our papers wet at some time or another, but have you ever noticed what happens to the ink as the water spreads? It doesn't always smudge and blur, as you might expect. Sometimes it splits up into weird colored streaks that creep across the page. When that happens, you're seeing chromatography in action. In this case it's totally accidental, but we can also use it by design to split up mixtures and other substances into their components. Chromatography is actually one of the most useful analytical techniques chemists have at their disposal, helpful in everything from identifying biological materials to finding clues at crime scenes. What is it and how does it work? Let's take a closer look!

Chromatography is a pretty accurate description of what happens to ink on wet paper, because it literally means "color writing" (from the Greek words chroma and graphe). Really, though, it's a bit of a misnomer because it often doesn't involve color, paper, ink, or writing.

Chromatography is actually a way of separating out a mixture of chemicals, which are in gas or liquid form, by letting them creep slowly past another substance, which is typically a liquid or solid. So, with the ink and paper trick for example, we have a liquid (the ink) dissolved in water or another solvent creeping over the surface of a solid (the paper).

The essential thing about chromatography is that we have some mixture in one state of matter (something like a gas or liquid) moving over the surface of something else in another state of matter (a liquid or solid) that stays where it is. The moving substance is called the mobile phase and the substance that stays put is the stationary phase. As the mobile phase moves, it separates out into its components on the stationary phase. We can then identify them one by one. 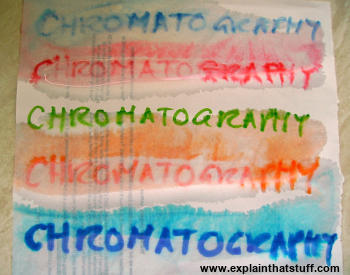 Photo: What makes ink blur on wet paper? What you're seeing here is chromatography in action. Different inks and papers produce very different effects. Try experimenting for yourself!

How does chromatography work?

Think of chromatography as a race and you'll find it's much simpler than it sounds. Waiting on the starting line, you've got a mixture of chemicals in some unidentified liquid or gas, just like a load of runners all mixed up and bunched together. When a race starts, runners soon spread out because they have different abilities. In exactly the same way, chemicals in something like a moving liquid mixture spread out because they travel at different speeds over a stationary solid. The key thing to remember is that chromatography is a surface effect.

As the liquid starts to move past the solid, some of its molecules (energetic things that are constantly moving about) are sucked toward the surface of the solid and stick there temporarily before being pulled back again into the liquid they came from. This exchange of molecules between the surface of the solid and the liquid is a kind of adhesive or gluing effect called adsorption (with a d—don't confuse it with absorption, with a b, where molecules of one substance are permanently trapped inside the body of another). Now remember that our liquid is actually a mixture of quite a few different liquids. Each one undergoes adsorption in a slightly different way and spends more or less time in either the solid or the liquid phase. One of the liquids might spend much longer in the solid phase than in the liquid, so it would travel more slowly over the solid; another one might spend less time in the solid and more in the liquid, so it would go a bit faster. Another way of looking at it is to think of the liquid as a mixture of glue-like liquids, some of which stick more to the solid (and travel more slowly) than others. This is what causes the different liquids within our original liquid mixture to spread out on the solid. 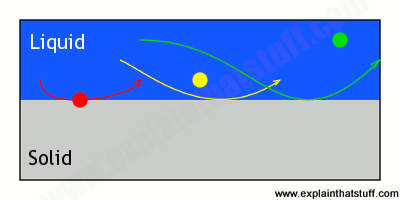 For chromatography to work effectively, we obviously need the components of the mobile phase to separate out as much as possible as they move past the stationary phase. That's why the stationary phase is often something with a large surface area, such as a sheet of filter paper, a solid made of finely divided particles, a liquid deposited on the surface of a solid, or some other highly adsorbent material.

What are the different types of chromatography?

There are many different ways of using chromatography. These are some of the best known: 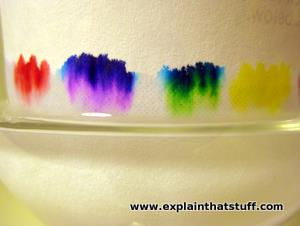 Photo: Simple paper chromatography. Draw some blobs of ink on paper (Crayola washable children's fiber tips are perfect), roll the paper into a cylinder, and place it in a wine glass with a small amount of water. As the water creeps up the paper, the colors will separate out into their components. That's chromatography in action!

This is the "spot of ink on paper" experiment you often do in school (also the effect we described at the start when you get your papers wet). Typically you put a spot of ink near one edge of some filter paper and then hang the paper vertically with its lower edge (nearest the spot) dipped in a solvent such as alcohol or water. Capillary action makes the solvent travel up the paper, where it meets and dissolves the ink. The dissolved ink (the mobile phase) slowly travels up the paper (the stationary phase) and separates out into different components. Sometimes these are colored; sometimes you have to color them by adding other substances (called developers or developing fluids) that help you with identification.

Instead of paper, the stationary phase is a vertical glass jar (the column) packed with a highly adsorbent solid, such as crystals of silica or silica gel, or a solid coated with a liquid. The mobile phase drips (or is pumped at high pressure) through the column and splits into its components, which are then removed and analyzed.

There are quite a few variations, including:

Photo: Column chromatography: You take your column, containing the stationary phase, and load it with your sample at the top (dark gray). As you add eluant (solvent) to the sample, it splits into its components (let's say they are colored red, yellow, and blue). These travel at different speeds and emerge one at a time at the bottom, where you can collect them in different containers.

So far we've considered chromatography of liquids traveling past solids, but one of the most widely used techniques is a type of column chromatography using gases as the mobile phase. Gas chromatography is a largely automated type of chemical analysis you can do with a sophisticated piece of laboratory equipment called, not surprisingly, a gas chromatograph machine.

First, a tiny sample of the mixture of substances being studied is placed in a syringe and injected into the machine. The components of the mixture are heated and instantly vaporize. Next, we add a carrier (the eluant), which is simply a neutral gas such as hydrogen or helium, designed to help the gases in our sample move through the column. In this case, the column is a thin glass or metal tube usually filled with a liquid that has a high boiling point (or sometimes a gel or an adsorbent solid). As the mixture travels through the column, it's adsorbed and separates out into its components. Each component emerges in turn from the end of the column and moves past an electronic detector (sometimes a mass spectrometer), which identifies it and prints a peak on a chart. The final chart has a series of peaks that correspond to all the substances in the mixture. Gas chromatography is sometimes called vapor-phase chromatography (VPC) or gas-liquid partition chromatography (GLPC). 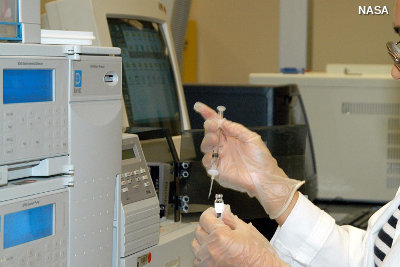 Photo: Gas chromatography is largely automated, but it still takes a trained operator to work one of these machines. Here, the sample is about to be injected. Photo by courtesy of NASA Kennedy Space Center (NASA-KSC).

How does gas chromatography work?

Here's a very simplified overview of what happens in the gas chromatography process: 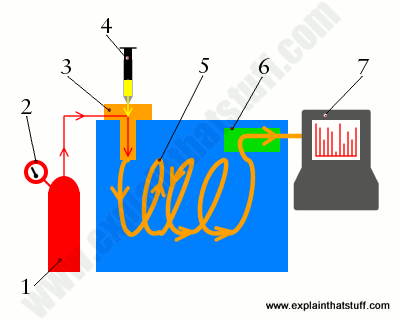 What is chromatography used for?

“... the pigments separate themselves from top to bottom in different colored zones.... such a preparation I call... the chromatographic method.”

Chromatography was developed in Russia in 1906 by an Italian-born botanist named Mikhail Tswett (sometimes spelled Tsvet; 1872–1919), who used it for studying plant pigments such as chlorophyll. (Like all great scientists, Tswett used and built on techniques developed by earlier researchers, so there is dispute over whether he can truly be described as the "inventor" of chromatography.)

During the 20th century, chemists found chromatography was a superb technique for studying and separating all kinds of complex mixtures. It's now widely used in forensic science (for identifying samples taken from crime scenes), in pollution monitoring (for identifying small concentrations of unknown pollutants in air and water samples), and for studying complex mixtures in such things as food, perfume, petrochemical, and pharmaceutical production. One of chromatography's big advantages is that it works with tiny samples and low concentrations (particularly helpful when it comes to such things as forensic science and drug or pollution testing). 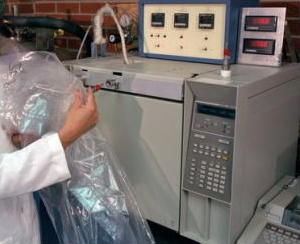 Photo: What's your poison? A sample of vehicle exhaust is injected into a gas chromatography machine so the pollutants it contains can be analyzed. Photo by Warren Gretz courtesy of US DOE/NREL (US Department of Energy/National Renewable Energy Laboratory).