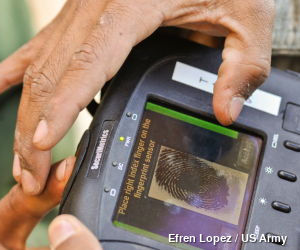 Nothing is completely secure. Locks can be picked, safes can be broken into, and online passwords can be guessed sooner or later. How, then, can we protect the things that we value? One way is to use biometrics—fingerprints, iris scans, retinal scans, face scans, and other personal information that is more difficult to forge. Not so long ago, if you'd had your fingerprints taken, chances are you were being accused of a crime; now, it's innocent people who are turning to fingerprints to protect themselves. And you can find fingerprint scanners on everything from high-security buildings to ATM machines and even laptop computers. Let's take a closer look at how they work!

Photo: Taking a thumbprint with a handheld fingerprint scanner. The scanning area is on top of the machine (on the left as we look at it) and you can see the image of the print appearing on the LCD screen. Photo by TSgt. Efren Lopez courtesy of US Army.

Why are fingerprints unique?

It's pretty obvious why we have fingerprints—the tiny friction ridges on the ends of our fingers and thumbs make it easier to grip things. By making our fingers rougher, these ridges increase the force of friction between our hands and the objects we hold, making it harder to drop things. You have fingerprints even before you're born. In fact, fingerprints are completely formed by the time you're seven months old in the womb. Unless you have accidents with your hands, your fingerprints remain the same throughout your life. 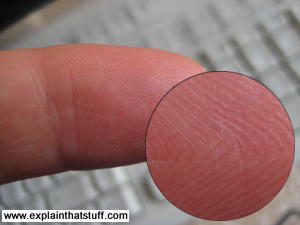 Photo: Your fingerprints are like unique keys you carry everywhere. In theory, no-one else has the same prints as you. The word "fingerprint" is a bit misleading: these ridges on the ends of your fingers and toes aren't there to help people identify you, but to give you better grip on things you pick up or walk on.

What makes fingerprints such a brilliant way of telling people apart is that they are virtually unique: fingerprints develop through an essentially random process according to the code in your DNA (the genetic recipe that tells your body how to develop). Because the environment in the womb also has an effect, even the prints of identical twins are slightly different. While it's possible that two people could be found who had identical fingerprints, the chances of this happening are so small as to be virtually negligible. In a criminal case, there are usually other pieces of forensic evidence that can be used with fingerprints to prove a person's guilt or innocence beyond reasonable doubt. Where fingerprints are being used to control access to something like a computer system, the chances of a random person having just the right fingerprint to gain entry are, generally speaking, too small to worry about—and much less the chance of someone guessing the right password or being able to break through a physical lock. 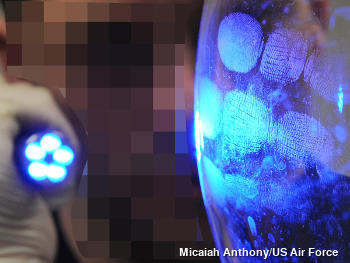 Photo: Fingerprint scanners turn analog fingerprints into a digital (numeric) form that computers can store, process, and compare. When it comes to forensic investigation, the analog methods are often still the best. Here, a forensic investigator has sprinkled orange powder onto a glass so that the hidden fingerprints on it show up in ultraviolet light. Photo by Micaiah Anthony courtesy of US Air Force.

Suppose you're in charge of security for a large bank and you want to put a fingerprint scanning system on the main entry turnstile where your employees come in each morning. How exactly would it work?

There are two separate stages involved in using a system like this. First you have to go through a process called enrollment, where the system learns about all the people it will have to recognize each day. During enrollment, each person's fingerprints are scanned, analyzed, and then stored in a coded form on a secure database. Typically it takes less than a half second to store a person's prints and the system works for over 99 percent of typical users (the failure rate is higher for manual workers than for office workers).

Photo: Enrollment: "Recognize" means to identify something or someone you've seen before. So you can only recognize a fingerprint if you've already seen it at least once already. Enrollment is the process of scanning fingerprints for the first time so they can be checked again later. Photo by Amber Leach courtesy of US Army and Wikimedia Commons.

Once enrollment is complete, the system is ready to use—and this is the second stage, known as verification. Anyone who wants to gain access has to put their finger on a scanner. The scanner takes their fingerprint, checks it against all the prints in the database stored during enrollment, and decides whether the person is entitled to gain access or not. Sophisticated fingerprint systems can verify and match up to 40,000 prints per second!

How fingerprints are stored and compared

When fingerprints were first used systematically for criminal investigation in 1900, by Sir Edward Henry of the Metropolitan Police in London, England, they were compared slowly and laboriously by hand. You took a fingerprint from a crime scene and another fingerprint from your suspect and simply compared them under a magnifying glass or microscope. Unfortunately, fingerprints taken under different conditions can often look quite different—the one from the crime scene is much more likely to be incomplete or smudged—and comparing them to prove that they are identical (or different) sometimes takes great skill. That's why forensic scientists (people who study evidence collected from crime scenes) developed a reliable system for matching fingerprints where they looked for between eight and sixteen distinct features. In the UK, two fingerprints need to match in all sixteen respects for the prints to be judged the same; in the United States, only eight features need to match. 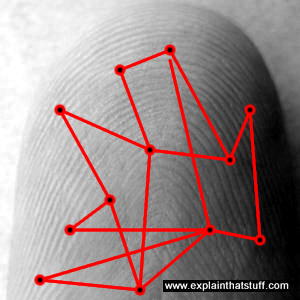 Photo: A computer can compare fingerprints by identifying key features, then measuring the distances and angles between them. Algorithms can turn patterns like this into unique numeric codes.

When a computer checks your fingerprints, there obviously isn't a little person with a magnifying glass sitting inside, comparing your fingerprints with all the hundreds or thousands stored in the database! So how can a computer compare prints? During enrollment or verification, each print is analyzed for very specific features called minutiae, where the lines in your fingerprint terminate or split in two. The computer measures the distances and angles between these features—a bit like drawing lines between them—and then uses an algorithm (mathematical process) to turn this information into a unique numeric code. Comparing fingerprints is then simply a matter of comparing their unique codes. If the codes match, the prints match, and the person gains access.

But when fingerprints are being used to control access to buildings and computer systems, more sophisticated methods have to be used: a computer has to scan the surface of your finger very quickly and then turn the scanned representation into a code it can check against its database. How does this happen? 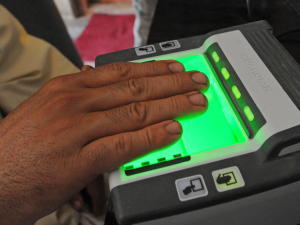 Photo: A typical optical fingerprint scanner—it's a bit like photocopying your hand or placing it on a computer scanner. Photo by Tech. Sgt. Francisco V. Govea II courtesy of US Army.

There are two three ways of scanning fingers. An optical scanner works by shining a bright light over your fingerprint and taking what is effectively a digital photograph. If you've ever photocopied your hand, you'll know exactly how this works. Instead of producing a dirty black photocopy, the image feeds into a computer scanner. The scanner uses a light-sensitive microchip (either a CCD, charge-coupled device, or a CMOS image sensor) to produce a digital image. The computer analyzes the image automatically, selecting just the fingerprint, and then uses sophisticated pattern-matching software to turn it into a code. 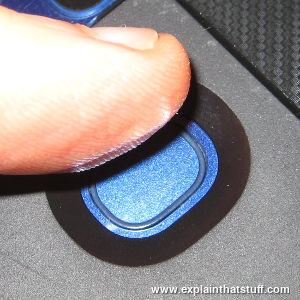 Photo: A capacitive fingerprint scanner on the back of a Samsung Galaxy A20e smartphone.

The third type of fingerprint reader is called an ultrasonic scanner, because it uses high-frequency sound waves (ultrasound) to "map" your finger instead of light. If you have a new Samsung smartphone, you'll probably find it has one of these built under the display, which you can use to unlock the phone or secure access to your apps and data. According to Samsung, ultrasonic scanners are more secure (because they scan fingerprints in three dimensions) and work better outdoors (in bright light or low temperatures) than optical scanners, though they tend to be slower than capacitive scanners.

What happens during a scan?

Unlike ordinary digital photos, scans have to capture exactly the right amount of detail—brightness and contrast—so that the individual ridges and other details in the fingerprint can be accurately matched to scans taken previously. Remember that fingerprints might be used as evidence in criminal trials, where a conviction could result in a long jail sentence or even the death penalty. That's why "quality control" is such an important part of the fingerprint scanning process. 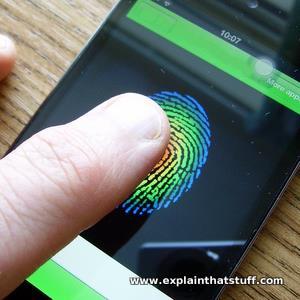 Photo: Quality counts: fingerprint scans have to produce images with enough detail to allow an accurate comparison with other scanned images.

Here's how the process works with a simple optical scanner:

What can you use fingerprint scanning for? 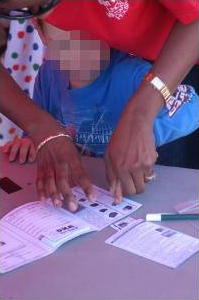 Photo: Biometrics isn't necessarily sinister. Here, a child's fingerprints are being taken to help with identification after a humanitarian disaster. Photo by Porter Anderson courtesy of US Navy.

Fingerprint scanning is the most popular biometric technology (used in over half of all biometric security systems)—and it's easy to see why. We store more and more information on our computers and share it, online, in ever more risky ways. Much of the time, our bank information and personal details are protected by just the few hastily thought-out numbers in our passwords. Anyone can use your credit or debit card to get money from an ATM (automated teller machine or "cashpoint") if they know just four numbers!

In future, it will be much more common to have to confirm your identity with biometric information: either your fingerprint, a scan of the iris or retina in your eye, or a scan of your face. Some laptop computers and most smartphones now use fingerprint scanning to make them more secure. Large banks, such as Bank of America and JPMorgan Chase, have introduced fingerprint authentication as part of the signin process for their smartphone apps. Soon we could be seeing fingerprint scanners on ATMs, in airport security scanners, on checkouts in grocery stores, in electronic voting systems, and perhaps even replacing the keys in our (self-driving) automobiles!

Some people don't like the sound of a "Big Brother" society where you have to do everything with your fingerprints—and it's true that there are important issues of privacy. But humans have always used biometrics for personal identification: we tell one another apart chiefly by recognizing one another's faces and voices. Worry about the drawbacks, by all means, but don't forget the advantages too: your information should be much more secure from criminals—and you'll never again have the problem of losing your keys or forgetting your password!

You can find much more detailed technical descriptions of how real fingerprint systems work by browsing through patents. Here are a few representative ones I've picked out, but there are many more: