Have you even been in a noisy factory and had to cover your ears? Walked past a jackhammer in the street and winced because the sound was so loud? Being exposed to loud noises for a brief period of time usually does no harm, but imagine having to suffer it hour upon hour, day after day. If noise is a problem to you, the first thing you need to do is measure how loud it is so you can take effective steps to reduce it. Making precise measurements of noise used to be quite a tricky business, but now there are automated, electronic sound-level meters that do the job for you. Let's take a closer look!

Photo: A typical sound pressure level (SPL) meter made by Quest. Note the long stick at the top: it's the microphone that samples and measures incoming sounds. Photo by James R. Evans courtesy of US Navy.

What makes one sound louder than another? 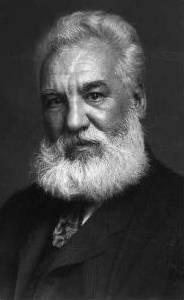 Photo: Alexander Graham Bell. Courtesy of US Library of Congress.

How loud a sound seems to be depends on who's listening. A young person playing rock up in their bedroom might not think their music is loud, but their parents in the room down below might have other ideas. In other words, how loud things seem is a subjective thing and not something we can easily measure. However, what makes one sound seem louder than another is the amount of energy that the source of the sound is pumping towards the listener in the form of pressure variations in the air. That's the intensity of the sound and it's an objective thing—something we can easily measure and agree on.

Meters that measure sound levels work by calculating the pressure of the sound waves traveling through the air from a source of noise. That's why you'll sometimes see them referred to as sound pressure level (SPL) meters. Devices like this give a measurement of sound intensity in units called decibels, a scale first devised by telephone pioneer Alexander Graham Bell (decibel~Bell, get it?). 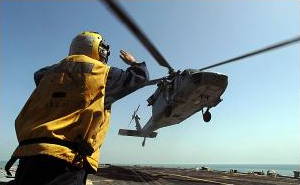 Photo: Imagine how loud this job can get. The Landing Signal Enlisted (LSE) is the brave person who has to guide helicopters and jet airplanes safely in to land on aircraft carriers. Notice that they always wear heavy duty earmuffs to protect their hearing against jet engine noise that can exceed 150dB at such close quarters. Photo by Patrick Grieco courtesy of US Navy.

You have to think about the decibel scale very carefully, because it's a logarithmic scale and it works in a different way to the scale on a ruler, which is a linear scale. On a ruler, a distance of 20cm is twice as long as a distance of 10cm and 30cm is three times as long. But the logarithmic decibel scale goes up in powers of ten: every increase of 10dB on the scale is equivalent to a 10-fold increase in sound intensity (which broadly corresponds with a doubling in loudness). That means a sound of 20dB is 10 times more intense than a sound of 10dB and a 30dB sound is 100 times more intense. A sound of 100dB is actually 1,000,000,000 times more intense than a sound of 10dB and not 10 times as intense, as you might suppose. That's why sounds high up the decibel scale (from about 85–200dB) are a major cause for concern: the sound waves carry so much energy that they will damage your hearing, sooner or later.

But how does all this translate into "loudness"—what we actually feel about the volume of a sound? The decibel scale is logarithmic because that's essentially how our ears respond. A 10-fold increase in sound intensity, measured as a 10dB increase with a sound meter, would feel to us roughly like a doubling in loudness. Another 10-fold increase, and another 10dB increase, would feel like another doubling. Putting those two things together, a 100-fold increase in sound intensity would give a 20dB increase on our sound meter and feel like a quadrupling in loudness. So a sound of 100dB is 90dB louder than a sound of 10dB, which is a billion times more intense and 2×2×2×2×2×2×2×2×2 = 29 or roughly 500 times louder.

From rustling leaves to jet engines, here's a quick guide to some everyday sounds...

Sound level meters look quite simple. They have a pointy stick at the top, which is the microphone that samples and measures the sound. The stick keeps the microphone away from the body of the instrument, cutting out reflections, and giving a more accurate measurement. Inside the square box at the bottom of the meter, electronic circuits measure the sound detected by the microphone and amplify and filter it in various ways before showing a readout on a digital LCD display. 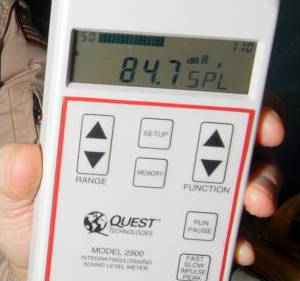 Photo: A close-up of the LCD display in the Quest Model-2900 sound level meter in our top photo, currently reading 84.7 decibels (just below the level considered to cause long-term hearing damage). This sophisticated meter is capable of integrating and logging as well as making instantaneous measurements. It's an example of a type-2 meter (see below). Photo by James R. Evans courtesy of US Navy.

Different kinds of sound level meters are available. The most basic ones give a reading of the maximum instantaneous sound pressure level (SPL), in decibels, at the moment when you switch them on. Roughly speaking, that corresponds to how "loud" a noise sounds at the moment you take the measurement. That isn't always tremendously useful if you want to measure the average sound levels over a period of time in somewhere like a noisy production plant. For that, you need a slightly more sophisticated (and expensive) device called an integrating sound level meter. Integrating, in this case, means summing over a period of time. For measuring sound levels over longer periods, you can use data logging meters that make measurements every so often. Upload these measurements to a computer and you can draw yourself a chart showing how the sound level varies over the course of a day, week, or longer. This kind of longer-term analysis is a fairer and more accurate way of sensing whether sound is a nuisance or a health issue than simply relying on one or two instantaneous measurements.

Sound level meters also vary widely in quality. The best ones (indeed, the only ones worth using) are designed to meet international standards such as IEC 60651, IEC 60804 and ANSI S1.4 and are graded as type (or class) 0–3. Meters that meet the highest standards are called type 0 and they're suitable for making high-precision measurements (in a scientific laboratory, for example). Type 1 are slightly less accurate, but still suitable for high-precision work. Those that meet the lesser standards are called type 2 meters and are suitable for more general use, but not really for lab-quality measurements. Type 3 meters, which are considerably less expensive, are less accurate again and only really suitable for rough survey work or for making preliminary measurements to see whether more accurate surveys are needed with a type 0-2 meter.

You have a microphone and you have a laptop, so why not combine the two to make a kind of virtual software meter? You'll need to calibrate your equipment (match sound levels of known loudness to the traces on your screen so you can find the levels of unknown sounds). Then you can use your laptop in exactly the same way as any other sound level meter. You can also find some fairly good sound level apps for things like the iPhone, which do an even better job. While you can't really expect DIY meters and phone apps to match the quality or accuracy of the very best professional (type 0/1) sound meters, which cost 10–100 times more, they can certainly give you a reasonably good indication of the relative loudness of different sounds. 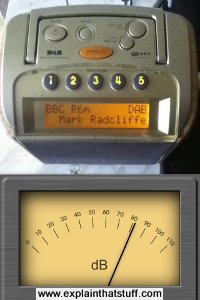 Here are a few examples of sound-level software you can download and experiment with:

Photo: You'll find lots of decibel meter apps on your favorite app store. This one is Decibels by David Bannach. It uses a nicely retro analog meter to show you the decibel level of whatever sound is currently entering the microphone of your smartphone (or mobile device). Another nice touch: you can take a photo of the thing that's making the noise too, for easy reference. Here I'm measuring the loudness of a radio program at a distance of about 10cm (4in), which you can see comes out at about 80dB (according to this app, anyway). Although apps like this aren't suitable for professional measurements, they're great educational tools—and useful as a rough indication of how loud things are around you.

For deeper technical explanations of the circuits that sound level meters use to measure sound energy, try: