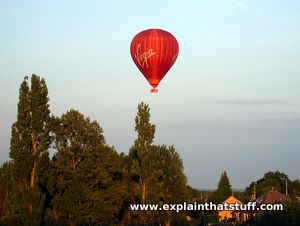 Up, up, and away! If you love the idea of flying but you've nowhere in particular to go, a hot-air balloon could be just the thing. In an age when jet engines can blast you round the world in hours and rockets routinely zoom into space, floating under a big bag full of gas might seem a bit old-fashioned—but then hot-air balloons were where air travel really began. Ask most people who were the pioneers of human flight and they'll answer "The Wright brothers" without a moment's thought. But those brilliant men from Ohio were just the inventors of engine-powered human flight; two other brothers, Joseph Michel and Jacques-Étienne Montgolfier, beat them into the air by about 120 years when they developed the first practical hot-air balloons. Ever wondered how these giant floating gas bags actually work? Let's take a closer look!

Photo: With a few mighty blasts from the gas burner, this hot-air balloon safely cleared these tall trees—using nothing more than the power of science!

How does a hot-air balloon work (in theory)? 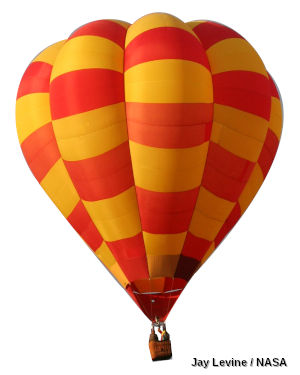 In a word: buoyancy.

Here's another way to look at it: generally speaking, an object will float if it's less dense than water (in other words, lighter than an equal volume of water) and sink if it's more dense (heavier than an equal volume of water). Imagine a block of lead the size of your arm dropped into a bathtub filled with water. An "armful of lead" weighs much more than an "armful of water" so lead sinks to the bottom of the tub straight away. But an "armful of plastic"—the plastic arm of a manikin, for example—floats because it weighs less than the same volume of water.

A hot-air balloon isn't like a rubber balloon tied in a knot: it's open at the bottom so air can still get in and out. That means the density of the air in the balloon can change while the pressure inside and outside is essentially the same. Hot-air balloons float because the air caught inside the balloon is heated up by a burner, making it less dense than the air outside. As the burner heats the air, it expands and some of the air escapes; that's what makes it less dense. Here's another way to think of it. You've probably heard people say that heat rises, by which they really mean that hot air rises. When you see clouds of dirty gray gas drifting upward from smokestacks, that's because the air coming out of them is hotter than the ambient (surrounding) air. If you could wrap a bag around the hot air entering the bottom of a smokestack, and seal it up, the whole bag would shoot upward and come out of the top before zooming off and up into the air. In effect, you'd have made a tiny little hot air balloon!

Tiny balloons aren't actually much use, however. If you want to carry a heavy weight on the sea, you need a big ship: one that can displace more water can carry more load. In exactly the same way, you need a big hot-air balloon to lift a big weight—because you need to create more lift with a larger volume of hot gas. Just to lift an adult man's weight, you'd need a balloon about 4m (13ft) in radius with the air inside heated to a temperature of about 120°C (250°F). That explains why hot-air balloons are generally so large.

How does a hot-air balloon work (in practice)?

If you know that warm air rises, you could build yourself a hot-air balloon without knowing anything more about science—in other words, just by trial and error. What do you need to build a hot air balloon in practice? Three things: an envelope, a burner, and a basket. 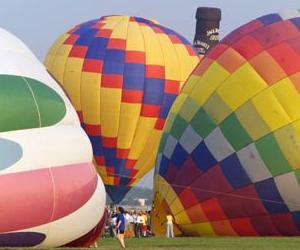 Photo: Envelopes: Look at the little people in the center of this picture and you can see just how big these envelopes are. Note the gores (the curved, vertical strips from which the envelopes are sewn together). Photo courtesy of NASA Glenn Research Center (NASA-GRC).

To trap you some hot air, you'd need the balloon itself, which ballooners generally call the envelope. These days, it's usually made from a strong, light, durable, synthetic fabric such as ripstop nylon (nylon sewn into squares to stop rips and tears from spreading). The envelope is made in vertical sections called gores that are sewn together very tightly at the seams to make a strong, air-tight container that doesn't leak. There are holes in the envelope at both the top and the bottom: the top of the balloon, known as the crown, has a little hole in it called the parachute vent (or parachute valve) that can be opened by pulling on a cord, which allows hot air to escape and makes the balloon descend. The opening at the bottom (known as the throat) is immediately above the burners and reinforced with a skirt made from a fireproof material such as Nomex® to stop it melting or burning.

The hot air that fills the envelope comes from gas jets fueled by propane cylinders (similar to ones you might use on a portable camping stove). Although some balloons have only a single burner, it's more common to have two or more, both to provide more lift and for safety's sake (in case one burner fails). Each fuel cylinder provides about 70–90 liters of fuel, and weighs about 50–60kg (110–140lb) when full. 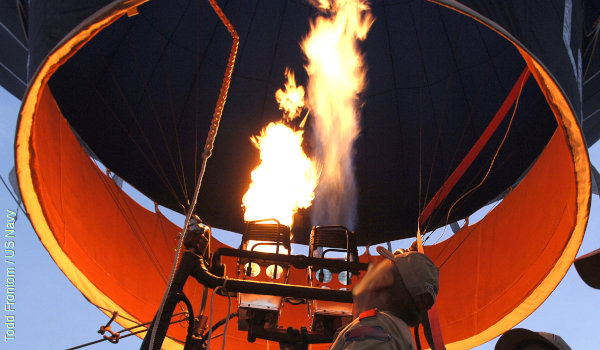 Photo: Burners: Two propane gas burners are firing hot-air into this balloon. Notice the orange heatproof skirt protecting the envelope at the bottom, made from a material such as Nomex®. Photo by Todd Frontom courtesy of US Navy. 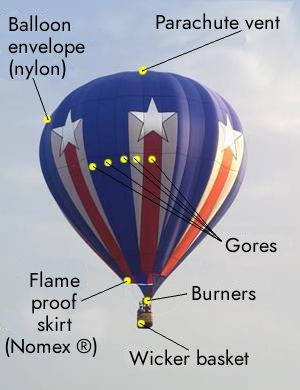 Photo: The main parts of a hot-air balloon. Photo courtesy of NASA Glenn Research Center (NASA-GRC) with annotations by Explain that Stuff.

It's traditional for hot-air balloons to carry their passengers and cargo in a wicker basket suspended directly beneath the burners and the envelope. Wicker is light, durable, and squashy, so it helps to absorb some of the impact if the balloon lands too quickly. The basket is connected to the burners by eight strong ropes or chains. Ropes from the burner assembly connect to the envelope above by very strong, load-bearing tapes that run vertically up the seams between the throat and crown of the envelope.

How do you fly a hot-air balloon?

You launch a hot air balloon by unwrapping the envelope and laying it along the ground. You tie it to your burners and basket and use a large fan to inflate it with cold air. When that's done, you remove the fan and use the burners to heat the air until it's hot enough to lift you off the ground. Once you're airborne, all you can really control is whether the balloon rises or falls: you can go up by turning on the burners to heat the air in the envelope; you can go down by opening the parachute vent to allow hot air to escape and cool air to rush in to take its place. So up and down is easy, but what about steering? Once you've mastered ballooning, you'll find you can move sideways (very crudely) by making the balloon rise or fall so it catches air currents (light winds or breezes) blowing in the direction in which you want to travel. But it's all a bit hit-and-miss—and one of the joys of hot-air ballooning is that you never quite know where you're going to go!

Sweeping gracefully over the local landscape is one thing, but what about gliding over the ocean or soaring over mountains? The more extreme your voyage, the more extreme the balloon you need to arrive in one piece! Modern high-altitude balloons, like the Breitling Orbiter, look like something out of space science; in the early days of aviation, lacking access to high-tech materials and technology, brave pioneers had to use sheer ingenuity to protect themselves instead. Back in 1925, aviation pioneer Ralph Hazlett Upson developed this improved balloon, with some interesting features for making long, record-breaking voyages at high altitudes. 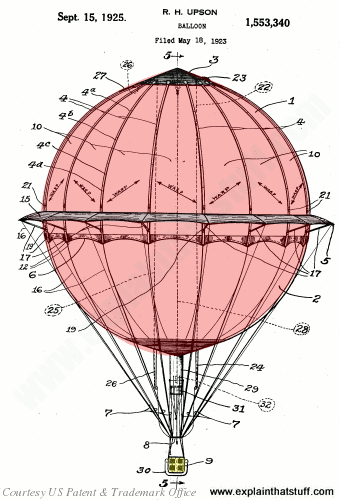 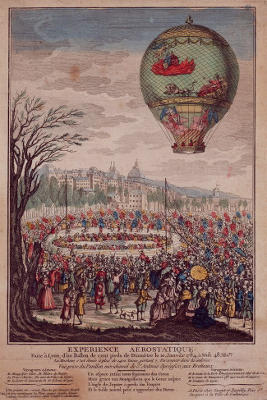 Illustration: Up, up and away—An early flight by the pioneering Montgolfier brothers. This one carried seven passengers (including the two brothers) and took place over Lyon, France, on January 19, 1784. Hand-colored etching created chés Enaut et Rapilly, rüe St. Jacques à la ville de Coutances, 1784, courtesy of US Library of Congress.

Here are some key moments in ballooning history: