You are here: Home page > Tools and machines > Chainsaws
Advertisement 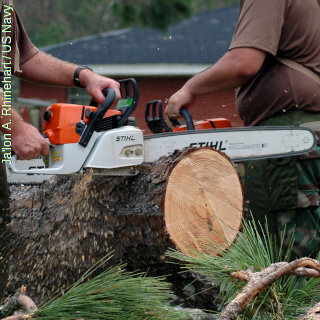 Trees are pillars of living majesty that can take hundreds of years to grow; chainsaws are violent, hungry machines that bring them tumbling to the ground in minutes. If it seems like a crime to fell something so fantastic just for its wood, remember that trees usually die from the inside out and often become dangerous toward the end of their life. Sometimes fallen trees block roads or railroads and need to be chopped and cleared in a hurry: in emergencies and natural disasters, there's often no more welcome sound than the buzz of a chainsaw. If you think chainsaws are damaging and destructive, remember that they're very useful for routine forest management—for thinning and clearing trees to ensure the overall, long-term health of woodland habitats and the creatures who live in them. What exactly is a chainsaw and how does it work? Let's take a closer look!

Photo: Chainsaws to the rescue! Two US Navy personnel help to clear up trees felled in Gulfport, Miss. in August 2005 by Hurricane Katrina. Photo by Ja'lon A. Rhinehart courtesy of US Navy.

What is a chainsaw?

The clue is in the name! A chainsaw has two main parts: a saw blade built into a chain, wrapped around a long metal guide bar, and a small, one-cylinder gasoline (petrol) engine (sometimes an electric motor powered by a cord or battery pack). The chain is a bit like a bicycle chain, running around sprockets (gear wheels designed to turn a chain) only with about 30 or so sharp teeth (made from a hardened steel alloy) mounted around it at intervals. Inside the engine, as the piston moves in and out of the cylinder, it pushes a connecting rod that turns a crankshaft. The crankshaft turns gears that are connected (through a centrifugal clutch, explained below) to one of the sprockets on which the chain is mounted—and the chain spins around.

Photo: A chainsaw is a simple and amazingly effective idea: put your saw on a chain and let a small gasoline (petrol) engine do the hard work! Here are some of the main parts of a typical Stihl chainsaw. Photo cropped from a picture taken by Jon Hyde, courtesy of US Navy, with annotations by explainthatstuff.com.

What happens inside a chainsaw? 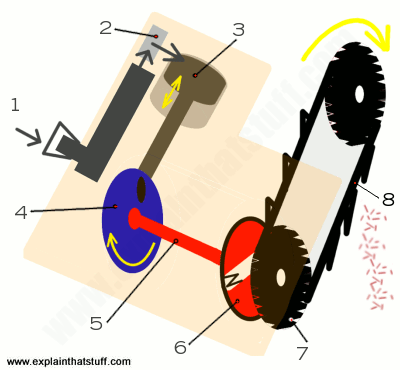 Yes, crudely speaking, that's what a chainsaw does: in scientific terms, it converts the chemical energy locked in gasoline into mechanical energy you can use to "do work," turning a tree into logs, sawdust, noise, and heat. Here's a very simplified explanation:

This is a hugely simplified diagram of a chainsaw. You can see a much more detailed and faithful representation in this chainsaw cutaway from Popular Science, August 1951, which I used as one of my references. That shows much more detail of the air-cooling mechanism and the gearbox, but (as with all cutaways) it's a little harder to follow

Let's talk a bit more about the clutch. A clutch is a device that makes and releases a mechanical connection between an engine and the machine it's driving: it's a kind of "switch" that allows an engine to run all the time (which is quicker and easier than switching it on and off) without always driving the machine it's connected to.

In a chainsaw, the clutch means you can keep the engine running all the time and simply disengage the chain (so it stays safely motionless) when the saw isn't actually being used. Chainsaws use a centrifugal clutch, which automatically engages when the engine spins at high speed (when the saw is actually chopping wood) and disengages when it's running more slowly (idling, in other words). A centrifugal clutch is really simple and consists of just a few parts. There's an inner drive shaft (linked directly to the engine and spinning all the time) and an outer rim positioned around it (connected to the chain sprocket). In between them are mechanical arms, connected to the inner shaft, that fly outward at high speed (with centrifugal force—or with the lack of centripetal force, if you prefer) locking the inner and outer parts of the clutch together. Centrifugal clutches are also used in high-spec yo-yos. 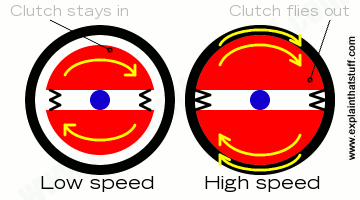 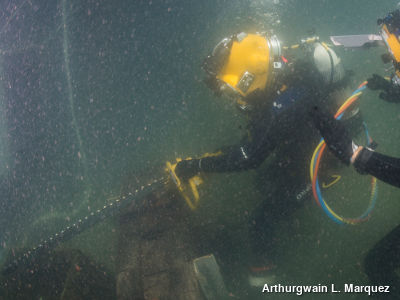 Photo: Look no engine! Not all chainsaws have engines—sometimes for obvious reasons. If you want to use a chainsaw underwater or in a place where an internal combustion engine won't work, you could try a hydraulic saw, like this one. It takes its power from the multicolored cable you see on the right. Photo by Arthurgwain L. Marquez courtesy of US Navy.

Advantages and disadvantages of chainsaws

The main advantage of using a chainsaw—speed—is fairly obvious. It would be hard to spend an entire day chopping your way through a forest with a handsaw, but you could certainly do that with a chainsaw.

A little crude math shows why a chainsaw is maybe 5–10 times quicker than an ordinary hand saw. Think how many planks of wood you could make from a single, trimmed tree trunk: maybe ten or fifteen? Now think how laborious it is to saw through a single plank with a handsaw; cutting through an entire tree is going to take you at least 10 times as long, assuming you don't run out of energy or melt your saw blade first.

Photo: Forestry management: A chainsaw can cut through a tree in about a tenth the time you'd need with a handsaw. Unlike a handsaw, it's just as easy to use sideways on (as shown here). Using a handsaw at this angle is really tricky! Photo courtesy of US Fish & Wildlife Service.

Let's try a more sophisticated estimate. Suppose you have a tree that is 30cm (roughly 1ft) in diameter and a chainsaw that makes a cut of 0.5mm (0.02in) into the wood with each pass of the chain. That means the chain needs to pass through the wood 600 times (30cm = 300mm and it takes two chain passes to remove each mm). If you're using a powerful chainsaw with a rotational speed of about 2800rpm (call it 3000rpm to make the math easy), the chain will (theoretically) make 600 passes in just 20 seconds. In practice, it'll take somewhat longer. Let's say a minute.

How long would it take with a handsaw? Suppose your saw has teeth the same size as the chainsaw's and suppose it's roughly the same length as the chainsaw (and therefore half as long as the chain). You still need to make those 600 passes through the wood. Maybe you're superhuman: suppose you can make one complete pass of the saw each second and keep up that pace constantly. Then it's still going to take, as a minimum, 600 seconds—or 10 minutes. In practice, it's going to take quite a bit longer as you get tired, as the saw slips out of its groove from time to time, and so on. These are only guesstimate, back-of-envelope calculations—but you get the idea: using a chainsaw is certainly several times faster (and probably 5–10 times faster) than using a good handsaw. 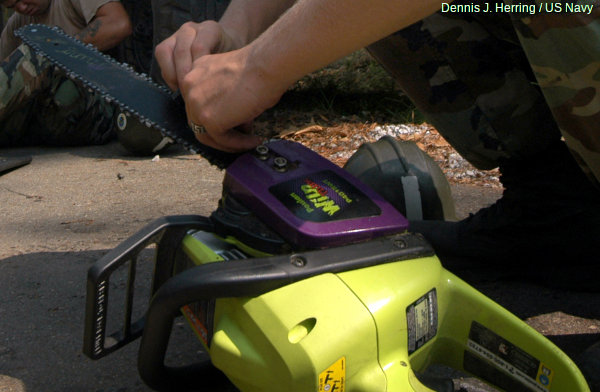 Photo: Chainsaw maintenance: Although absolutely vital for safety and performance, routine checks and repairs can be time-consuming chores that eat into the time you save with a mechanized saw. Photo of a Poulan Wild Thing chainsaw by Dennis J. Herring courtesy of US Navy.

The two biggest drawbacks of chainsaws are safety and maintenance. Although chainsaws can be used by any fairly strong adult (after suitable training), they are nevertheless inherently dangerous. (I have the manual for a Stihl MS270 chainsaw open beside me as I write this and it's interesting to note that about 16 of the 64 pages—fully a quarter of the text—is devoted to warnings and safety precautions.) The biggest risk comes from a problem called kickback, where the chain catches on something but the engine keeps turning, so the whole saw flies up and backward toward your head (think action and reaction—Newton's third law of motion), potentially causing fatal injuries. Chainsaw helmets with visors offer some protection; so too do chainsaw uniforms (made from synthetic fibers such as nylon, which snag up the chainsaw teeth and bring the machine quickly to a halt). 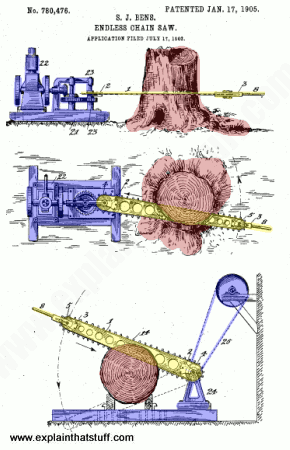 The other big problem with chainsaws is the amount of maintenance they need. A handsaw is delightfully maintenance free: the sawdust you produce simply falls out of the groove you're making. In a chainsaw, the super-fine dust can get caught up in the mechanism and mix with the chain's lubricating oil to make a gungy mess that has to be cleaned out regularly. Again, looking at the manual for the Stihl MS270, it's interesting to see there's a full-page chart spelling out a couple of dozen different checks and maintenance jobs you have to do before starting work each day, or on a weekly, monthly, or annual basis thereafter. So while it's true to saw that chainsaws save you time in the actual chopping of wood, some of that time is, unfortunately, lost in maintenance!

Artwork: The earliest chainsaw, invented by Samuel Bens in 1905, illustrated in his original patent application, which I've colored simply and tidied slightly to make it easier to follow. Here you can see the saw operating in two different configurations. In the top picture, we're looking from the side and the saw is pivoted so it slices horizontally. In the middle picture, we can see the same configuration but we're now looking down from above. In the bottom picture, the saw has been rigged up with a pulley so it slices a fallen log vertically. Artwork courtesy of US Patent and Trademark Office.

Who invented the chainsaw?

The earliest patent for an "endless chain saw" (US patent 780,476) was granted to Samuel J. Bens of San Francisco on January 17, 1905, and filed roughly 18 months earlier in July 1903. Here's one of the diagrams from that patent, showing (from the side and from above) a huge, static sawing machine slicing through a tree trunk. Bens was mainly concerned with how the saw worked and didn't specify the power source, except to note that it was "furnished with driving power, such as a steam-engine, gas-engine, or motor of any kind." About 16 years later, in 1921, he filed another patent (US patent number 1,617,565) for a portable chain saw that "aims to provide a simple, compact, durable, and efficient machine capable of being easily handled by a couple of operators to rapidly and expeditiously cut logs or trees irrespective of the position, and one which can be readily conveyed from place to place."

How do hedgecutters work?

At a glance, electric hedgecutters look quite similar to chainsaws, but they work in a totally different way.

Photo: Above: A typical electric hedgecutter. Below: A close-up of the two sets of blades, one of which slides past the other. 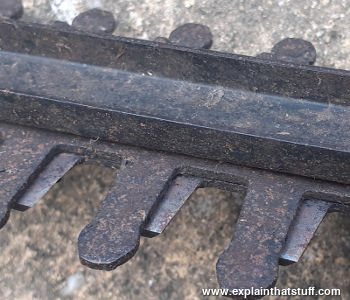 Instead of a rotating chain, they have a powered, reciprocating blade (one that moves back and forth) mounted on top of a stationary blade. As the electric motor whirrs into action, a crank pulls the moving blade past the stationary one and the cutter chops its way through your hedge. Step by step, it works like this: 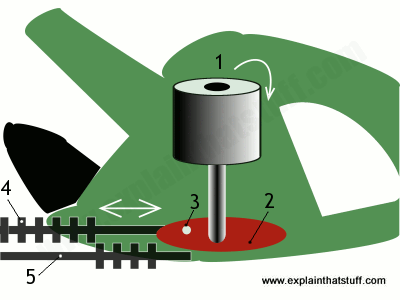 It's much the same mechanism as you'll find in an electric carving knife, though bigger and and more powerful.