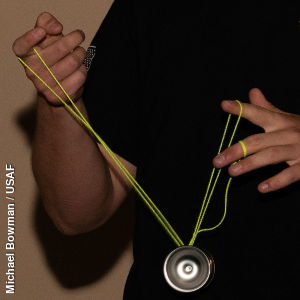 The science of yo-yos

Who'd have thought you could have so much fun with a bit of plastic on the end of a string? If you think nothing could be simpler than a yo-yo, it's time you tried looking into the science behind it! How does it keep spinning so long? How can it "sleep" (hang at the end of the string)—and what makes it climb back up again? Why do yo-yos feel so strangely stable as they spin? There's a lot of physics going on in your yo-yo. Let's take a closer look!

Photo: Yo-yo tricks—physics in action! Photo by Michael Bowman courtesy of US Air Force and DVIDS.

What makes yo-yos go up and down?

A yo-yo might look like a toy, but it's also an energy converting machine. Understanding how it constantly changes energy from one kind into another is the key to figuring out how it works. If you're not familiar with scientific terms like potential energy and kinetic energy, you might want to browse through our energy article before you go any further.

Artwork: Rollercoasters, yo-yos, and swinging clock pendulums are three examples of things that swap kinetic and potential energy back and forth in slightly different ways.

Yo-yos are different to rollercoasters and pendulums, however. A rollercoaster starts off with a certain amount of potential energy that it converts to kinetic energy (as it goes faster) or back to potential energy (as it climbs up each "hill"). Once it starts the ride, it never gains any more energy so it can never climb higher than its starting point. A pendulum has potential energy when it swings out to the side and hovers there before changing direction. It has kinetic energy when it speeds through the midpoint of its swing. Unless you help it along, it will slowly make shorter and shorter swings as its energy runs out.

But a yo-yo is different because you have to tug on the string to keep it moving. As long as you keep tugging, you can keep it moving forever. Each time you tug, you pull the string out from the yo-yo and make it spin faster, so giving it another burst of kinetic energy. 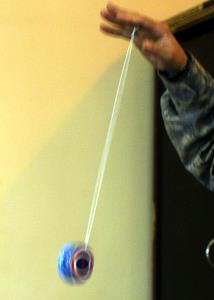 Photos: The string is like a yo-yo's fuel tank: it supplies the energy the yo-yo needs to keep moving. Photo by Eric Harris courtesy of US Air Force and Defense Imagery.

A spinning yo-yo actually has two different kinds of kinetic energy: one kind because it's moving up and down the string and another kind because it's spinning around. When you release the yo-yo from your hand, it falls toward the ground just like a stone, and it picks up speed because it's falling. But a yo-yo is different from a stone because it has string wrapped around its axle. As it falls, it starts to spin. That's why a yo-yo falls much more slowly than a stone: some of the energy that should be making it fall quickly is actually being used to make it spin around at the same time.

Whatever it's doing, and wherever it is on the string, a yo-yo usually has a mixture of three different kinds of energy: 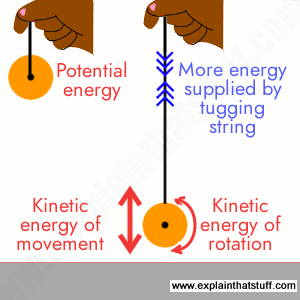 Artwork: A yo-yo starts off in your hand with only potential energy. Once it's spinning and moving, rising and falling, it has a mixture of potential energy and two kinds of kinetic energy. You have to keep adding more energy by jerking the string.

Why do yo-yos ever stop?

In a perfect world, a yo-yo could rise and fall on its string forever. But as the string spins on the plastic axle, friction (the rubbing force between two things that are in contact and moving past one another) uses up some of its energy. Although you can't see it happening, the spinning yo-yo wheels also rub against the air that surrounds them. This air resistance also eats away at the yo-yo's energy supply. If you don't keep giving the yo-yo more energy, by pumping the string up and down, it slows down very quickly and grinds to a halt. Every time you tug the string, you jerk the yo-yo so it keeps on spinning. In effect, you are recharging its energy batteries with each tug.

Why does a spinning yo-yo feel weird in your hand?

Things that are moving like to carry on moving. We call this phenomenon momentum (loosely speaking, momentum means "mass in motion"; things have momentum because they have both mass and velocity). A truck speeding down the freeway has more momentum than a car going the same speed because it has more mass. A person has more momentum when they ride a bicycle than when they walk because a bicycle goes faster (it has a higher velocity or speed).

Just as a yo-yo has two kinds of kinetic energy, so it has two kinds of momentum: linear momentum (because it moves in a straight line, up and down on the string) and angular momentum (because it spins around). All spinning objects have angular momentum. And anything that's spinning around likes to keep on spinning so its angular momentum stays the same. If you try to make it spin a different way, it will compensate by changing its motion somehow. If an ice skater is spinning in a circle with her arms out and she suddenly brings them in, she'll spin much faster than she did before. That's because she changes the way her mass is distributed. Her body compensates for this by changing her velocity to keep her angular momentum constant. 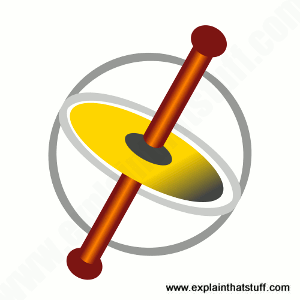 Artwork: A spinning yo-yo behaves a bit like a gyroscope. You can find a wonderful animated version of a spinning gyroscope on Wikimedia Commons.

Angular momentum is why a gyroscope behaves so strangely. A gyroscope is a heavy wheel mounted on a framework of three axles that allow it to spin around in three dimensions. Once you set a gyroscope spinning, it will strongly resist any attempts to make it spin another way. So if you try to tilt it, it will tilt back the other way. Like an ice skater, it tries to keep its angular momentum constant or, as physicists say, to conserve its angular momentum. A spinning yo-yo behaves just like a gyroscope. That's why it feels strangely stable as it spins on the string. It feels almost as though it has a built in stubbornness to change its movement. That's one reason why you can do all kinds of neat tricks with it!

How does a clutch yo-yo work?

The best yo-yos for doing tricks have what's called a centrifugal clutch. It's an extra mechanism of weights (shown here in blue) and springs (black zigzags) built inside the body of the yo-yo that makes it behave differently according to whether it's spinning fast or slow.

When the yo-yo spins fairly slowly, the springs clamp the weights firmly against the axle like brakes so the yo-yo rises and falls on the string (gray line) as normal.

Make the yo-yo spin faster, however, and the weights fly out from the axle because of centrifugal force (or, if you prefer, because the springs cannot provide enough centripetal force to keep them in). Now there's nothing to clamp the axle so it spins freely and the yo-yo "sleeps" at the bottom of the string. When it slows down, the weights go back in again and the yo-yo rises and falls on the string as normal.

No-one knows for sure where yo-yos came from, who thought of the idea, or even why they have that unusual name, but they're believed to be an ancient invention: on Wikipedia, you'll find a picture of an ancient Greek vase from around 2500 years ago featuring a boy playing with a yo-yo. It's amazing to think that this clever little toy was amusing people in ancient times in exactly the same way that it puts a smile on our faces today.

What about modern yo-yos? The earliest patent (invention record) for a yo-yo was granted to James L. Haven and Charles Hettrick of Cincinnati, Ohio, United States on November 20, 1866. The invention they described was "an improved construction of the toy, commonly called a bandelore, and consists in forming the same of two disks of metal, coupled together at their centers by means of a clutch and rivet..." 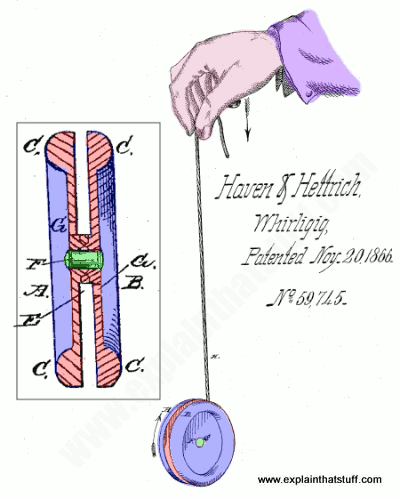 Artwork: Original drawings from the yo-yo patent granted to Haven and Hettrick in 1866. The figure on the left shows the relatively simple construction: just as in a modern yo-yo, the two outer discs have a space between them held together by a rivet (green) around which the string wraps. Artwork from US Patent #59,745: Bandelore courtesy of US Patent and Trademark Office.

How did the "bandelore" get from ancient Greece to the modern United States? Digging a bit further, I discovered an 1868 book called All the Year Round, edited by none other than Charles Dickens, which describes the bandelore as "an ingenious toy, which derives its origin from the East. It is composed of two small discs, connected by an axle, to which a cord is attached." It's unclear from this whether the eastern "origin" Dickens refers to comes before or after the time of ancient Greece. The 1835 Progressive Dictionary of the English Language, edited by Samuel Fallows, tells us the bandelore was also called a "quiz" and was "a toy in vogue about the beginning of the [19th] century."

Modern yo-yos were developed from the bandalore in 1928 by Pedro Flores (1896–1963/4), a Filipino living in Santa Barbara. According to an exhibit in the US National Yo-Yo Museum in Chico, California, he took the name "yo-yo" from the Filipino for "come-come." Flores' company was later bought and expanded by a businessman named Donald F. Duncan (1893–1971), whose Duncan Yo-Yo company greatly expanded production, selling 18 million yo-yos and spinning tops a year at its peak.

If you have any more pieces of the yo-yo's historic jigsaw puzzle, do please get in touch and I'll update my information.

These aren't about yo-yos; like this article, they're general introductions to energy and simple physics, best suited for ages 9–12: